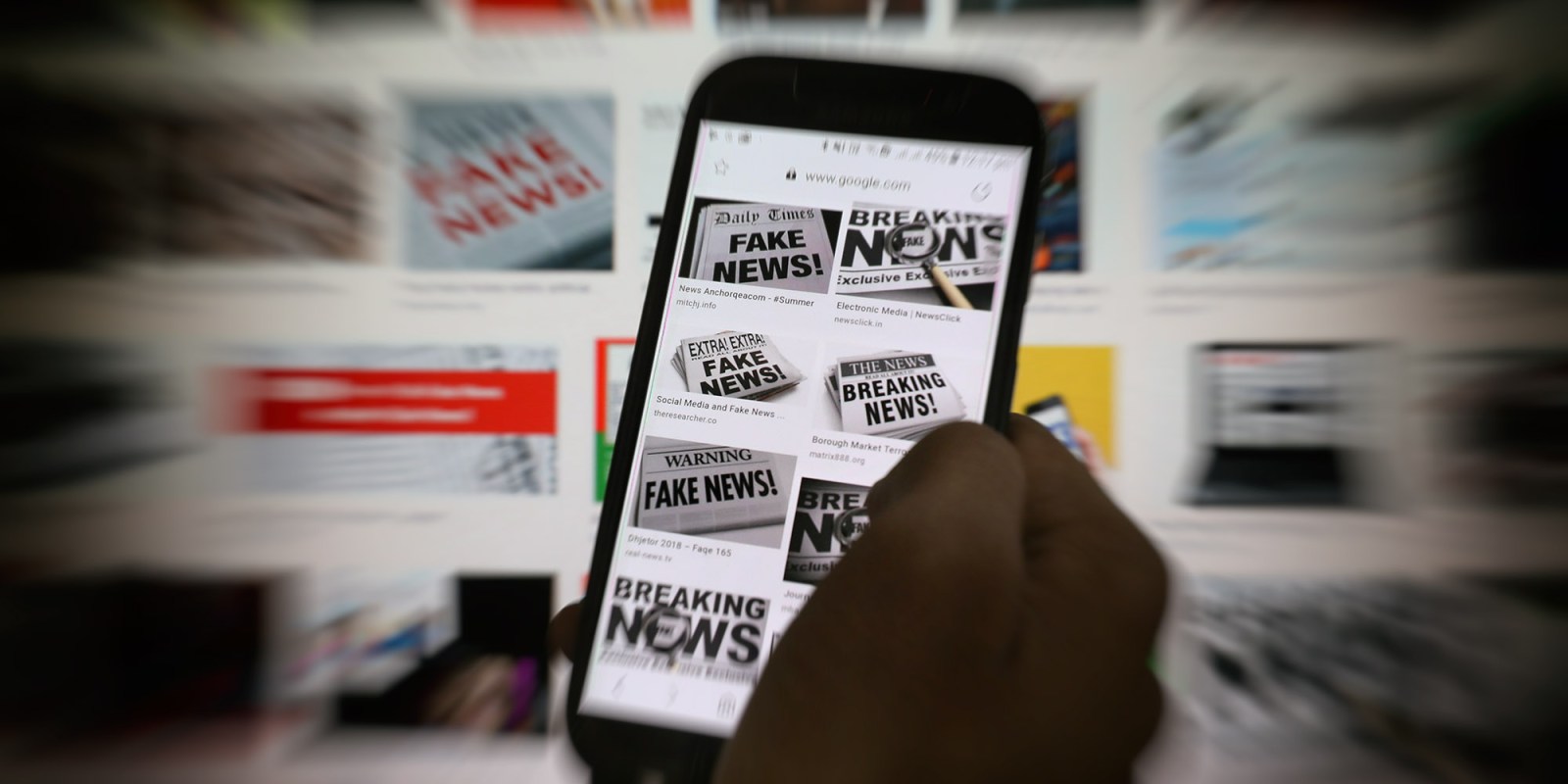 The communicators about vaccines — the Department of Health in particular — need to ensure that not only do they offer clear evidence and unpack concerns about vaccines, but they must also take into consideration the loss, trauma and grief people are going through.

Week 24: Vaccines — a matter of life death and compassion

Towards the end of July we had the darkly comical diversion of an angry, largely white, middle-class group in Cape Town who were marching for their rights, and to protect their right to freedom of association. One person interviewed was angry about being told to be vaccinated and said there were other answers, like exercising, getting out and getting vitamin D, and of course ivermectin and hydroxychloroquine. Over the past week the trend has been to focus on the supposed dangers of vaccines.

There seem to be a few angles to the common disinformation. On the one extreme you have the kind of content where we are told not to be vaccinated because everyone who does will die within the next two years.

What seems to elude those pushing this line is why Big Pharma would make products that actively kill you within two years. All those who are being vaccinated will die, while the few who refuse will live. It would suggest Big Pharma is killing off its clients, something which makes no sense. It might be that Big Pharma may seek to make you dependent on its products so they have you as a client for life, but why would they want to kill you off so quickly?

This “vaccines will kill you” kind of content often runs with conspiracy theories that the virus was deliberately engineered to kill lots of people. We are being told it is the vaccine that will kill you, but at the same time also that the virus was designed to kill. So, it opens the doors to ivermectin, or several alternatives like hot water, peroxide and garlic. (The HIV denialists would be whooping with glee at the return of garlic as a cure-all.)

The next kind of repetitive disinformation we are seeing is a variation on the theme of “the vaccine is designed to kill”. More commonly it is expressed in content where a person will say how their relative had been vaccinated a few days before, then got sick, was admitted to hospital and died. 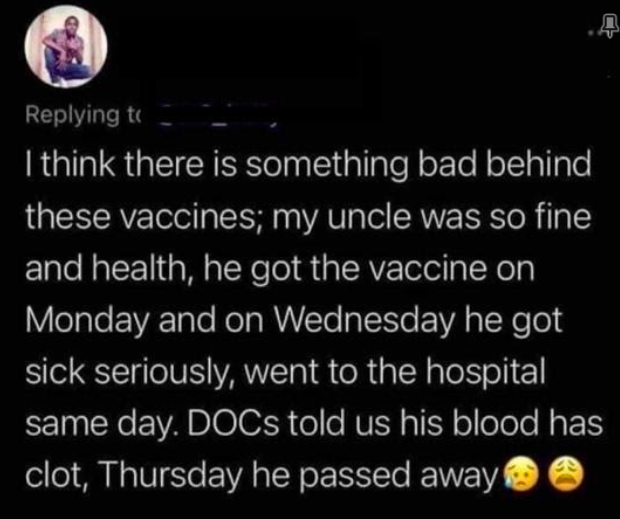 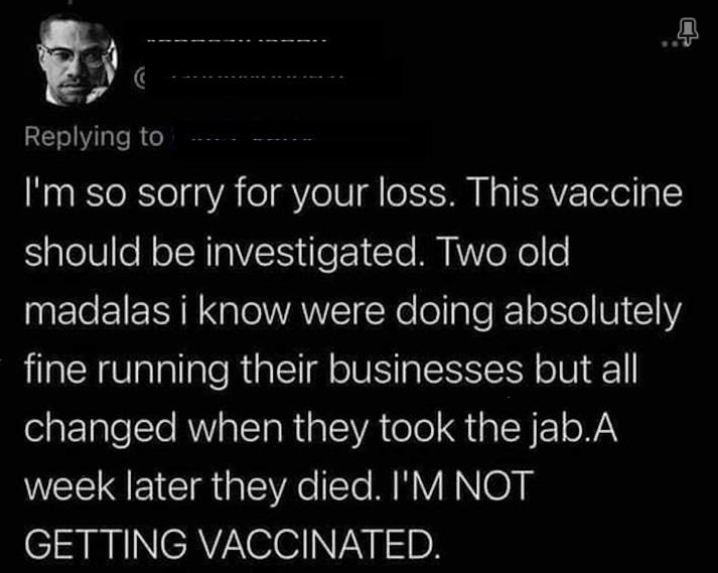 The implication is that either the vaccine failed to work or that it caused the death of their relatives or loved ones. These kinds of social posts may be misinformation — where there is no intention to mislead, and they may in some cases be true.

It may be true, for example, if we said a relative was vaccinated and three days later they were admitted to hospital because they couldn’t breathe, and soon after that they died. The issue isn’t that the person died or that it was only a few days after they were vaccinated, but that there is no evidence it was the vaccine that caused their death. The reality is that the person may have had an adverse reaction to the vaccine, but this is highly unlikely. (See these useful sites for more about Covid-19 vaccines and adverse reactions.)

The US Centers for Disease Control and Prevention (CDC) has reported about 6,000 deaths of people who had been vaccinated. While that sounds like a lot, the US has administered more than 340 million vaccines. So, the number of deaths is 0.0019%, or around 19 people per one million. The CDC goes on to note:

“Reports of adverse events to VAERS [Vaccine Adverse Event Reporting System] following vaccination, including deaths, do not necessarily mean that a vaccine caused a health problem. A review of available clinical information, including death certificates, autopsy, and medical records, has not established a causal link to Covid-19 vaccines.” (CDC AERS). In other words, despite having administered more than 340 million vaccines, a causal link between the vaccine and death has not been established.

If we look at how many people die globally from Covid-19, the current rate is around 552 people per million — nearly 30 times the risk, and these figures are already being affected by vaccines lowering the number. In South Africa, the rate is 1,241 Covid deaths per million, so around 65 times higher than the number who have been vaccinated.

One of the most serious adverse effects that it seems can occur is linked to clotting. Here, the most recent announcement by Professor Glenda Gray of the J&J Sisonke trial, (which looked at more than 477,000 health workers), reveals, “Out of all the vaccinated participants, only two people experienced the serious adverse event of blood clots with low platelet counts, but both made a full recovery.”

While it may therefore be the case that in some very rare cases people who have been vaccinated may go into hospital and die, the reality is that there is a 65 times greater chance of dying from Covid-related causes than the Covid vaccine.

People who have shared news of their loved ones dying just after being vaccinated is powerful anecdotal evidence. To be clear, some of the people who share those kinds of messages may well be sharing what they know and are not seeking to make others fearful or hesitant about vaccines.

Then there are the scumbags. Those who are anti-vaxxers, who want to scare people and push those who may be vaccine hesitant into the camp of those who refuse to be vaccinated. They aren’t scumbags for that reason necessarily, but rather because they see these trends we have highlighted and then seek to manipulate them and people’s trauma for their own agenda.

A recent example was the death of SA actor and producer Shona Ferguson. Some said his death was a result of the vaccine. His family stated it was as a result of Covid, not the vaccine. People in the public eye are often used to more than their fair share of trolling and insensitivity, but actively seeking to misrepresent the cause of death of a person is grossly insensitive and undignified. It takes a special sort of person to play on the trauma of others.

We need to be careful to distinguish people who are vaccine hesitant (they may have legitimate fears and concerns about the vaccines) from the anti-vaxxers, who support conspiracy theories and use fear-mongering and disinformation to muddy credible discussion.

Our nation is already deeply traumatised as a result of our levels of violence, the pandemic and the relentless loss and stress. The death of a loved one is deeply traumatic and psychologists and others advise against making big decisions in a state of bereavement and grief.

People in a state of grief may experience confusion and not question claims before them. They may be inclined to go with their emotions instead of the evidence. Given how many people are in varying states of grief and trauma, it is likely that they may be more vulnerable to accept claims about the vaccine being dangerous.

As our vaccination strategy ramps up significantly, the communicators, the Department of Health in particular, and all those who carefully craft messages need to ensure that not only do they offer clear evidence and unpack concerns about vaccines, but they must also take into consideration the loss, trauma and grief people are going through. We need more compassion, humility, care and kindness.

At the same time, we need to stand up and act against those who seek to exploit and heighten fears. If you suspect that content could potentially be disinformation, hate speech, harassment of journalists or incitement to violence, report it to Real411. To make it even more simple, download the Real411 mobile app. It is critical that we all play our part in combating and mitigating these digital offences.

We are approaching that magical period where political parties need to show us that they care, so in addition to asking what they will do in your area, ask them to issue one public statement a month in the lead-up to elections that highlights and condemns any attacks on journalists and then to demonstrate what action they took to help combat that. If they are edgy or push some other bullshit agenda don’t vote for them because they don’t believe in democracy. DM