Climate emergency: Do it for your children 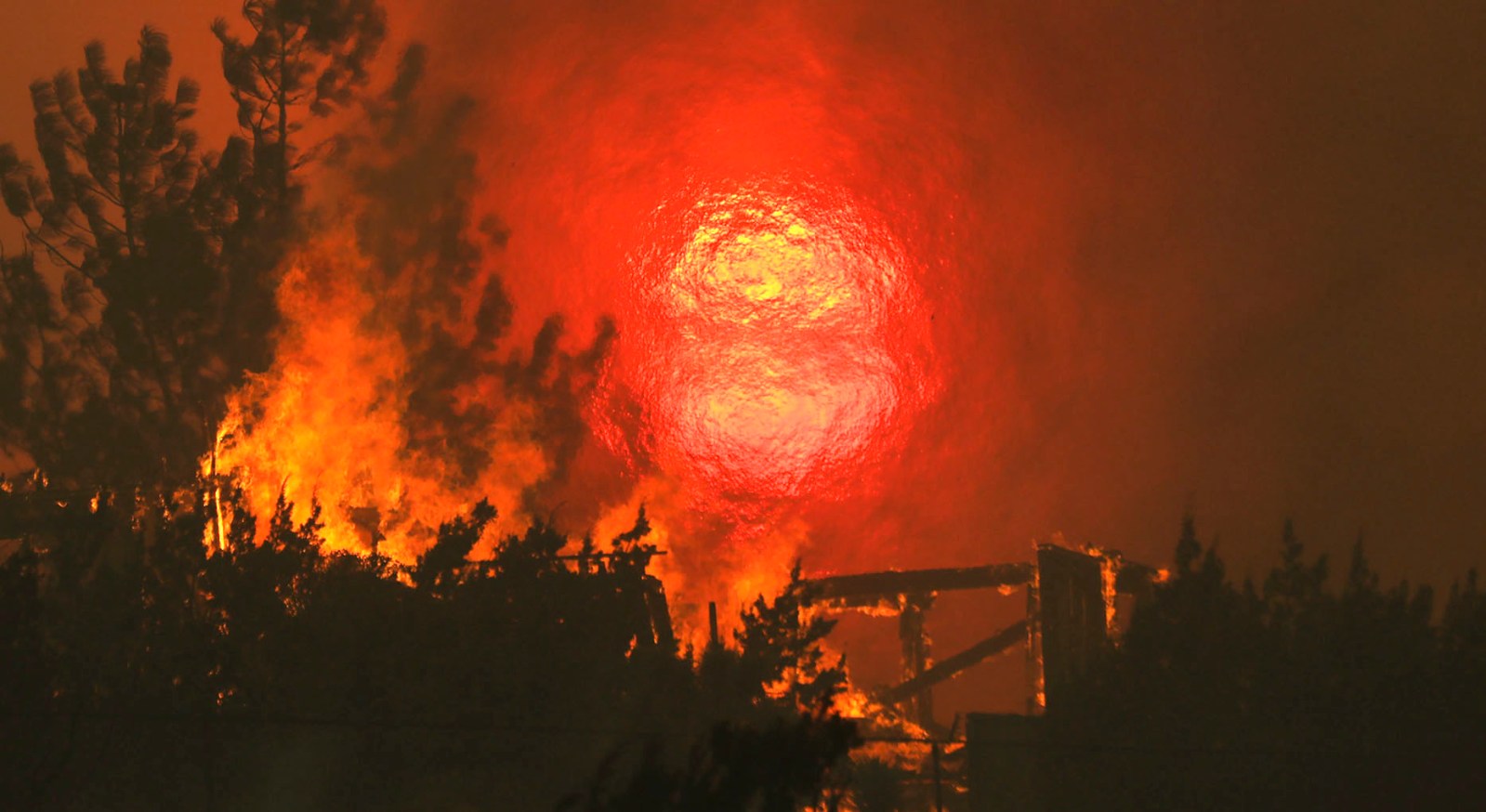 A home burns as the sun sets behind smoke and flames during the Bobcat Fire on September 18, 2020 in Juniper Hills, California. (Photo: Mario Tama / Getty Images)

The Walter Sisulu National Botanical Garden sits in a beautiful hidden wrinkle on the western edge of the Witwatersrand’s 56km quartzite reef. Despite the ugly encroachments of suburbia, pushing up against its hillside boundaries, and rich people’s houses perched ostentatiously on cliff-tops, the garden itself has preserved its beauty, biodiversity and its peace.

That two black eagles still live in the ancient cliffs there, free, frequently surfing on rising wind thermals, mostly unnoticed, is itself a small miracle. I saw them again last week.

But what has inspired me mostly on recent visits was the young children who are taken to play there. Accompanied by parents, or grandparents, their joie de vivre is palpable; their wonder at the environment; expressed in ways for which they don’t yet have words or understanding: it’s all about being amid a sensory assault of smell, sight, feel and a feeling of freedom that comes with natural beauty.

As I watched I could almost excavate those feelings and smells — the newness of everything — from my own deep memories of being taken to a park when I was a child of that age.

What was equally noticeable was the love their parents and other family members showed towards the children. Young adults with families in love with young children; laughing, tripping, scolding, shepherding. These children felt to me like the epitome of children everywhere: still in love with life, not weighed down by fear, oblivious to the dangers around them.

As I watched the children, I also felt pity and fear for them and their parents.

Many parts of the world are on fire and the next few decades are going to be rough. This generation of children is going to bear the brunt of the behaviours of the Baby Boomers and their Gen X successors, particularly when it comes to the unfolding climate crisis. Indeed, as I watched the children play, I wondered whether if I were younger I would even want to bring a child into the world at the moment, given the chaos we are bequeathing to them.

By coincidence, in the wake of these juxtaposing feelings — love interwoven with fear, came the publication of the Sixth Assessment Report of the Intergovernmental Panel on Climate Change yesterday. It’s the bleakest yet. A report in The Guardian puts it like this:

“As a verdict on the climate crimes of humanity, the new [report] could not be clearer: guilty as hell.

“The repeatedly ignored warnings of scientists over past decades have now become reality. Humanity, through its actions, or lack of action, has unequivocally overheated the planet. Nowhere on Earth is escaping rising temperatures, worse floods, hotter wildfires or more searing droughts.

Looking forward to the mid-21st century, the report predicts that across southern and eastern Africa we can expect global warming of at least 2%. The IPPR says the following will become our new normal:

Sadly though, one thing we have learnt from public health communication is that scare tactics — however scary — don’t bring about behaviour change.

And that’s why I felt that if the love of our children is the only thing on which we can find common ground then the climate crisis should be the one thing on which all those parents who still claim to be apolitical cannot afford to be neutral. Surely love can be the basis for common purpose and common action on the measures we each need to take now to mitigate the worst possibilities of the climate crisis?

According to the scientists: “Projected changes in extremes are larger in frequency and intensity with every additional increment of global warming.” Translation. A 1.6% increase will be less painful than a 1.7% increase. Every fraction and fraction of fraction counts.

So, yes, we left it late. Irreparable damage has been done. But, say the scientists, it’s still possible to mitigate the worst-case scenario.

Actually, we can do so much today.

And, as we get closer to the next big set of elections in early 2022, we can make it clear to all our politicians that local government is a site where we expect huge changes and we will use our votes to make them happen.

So back to the children at play in the botanical gardens, amazed by the eagles, fascinated by the ancient Witpoortjie Falls still gushing water in midwinter, oblivious to the biodiversity hidden in tangled plants. Joying as children have always joyed.

Do it for them. This is not somebody else’s problem. It’s your children’s problem. It can’t be deferred any longer. Think of the changes you can make and consider your actions as being like giving your child a gift, a symbol of your love, a future investment. And act today. DM/MC

Climate emergency: Do it for your children