July unrest: The Soweto doctor who lost everything – and the brave man who tried to save the malls 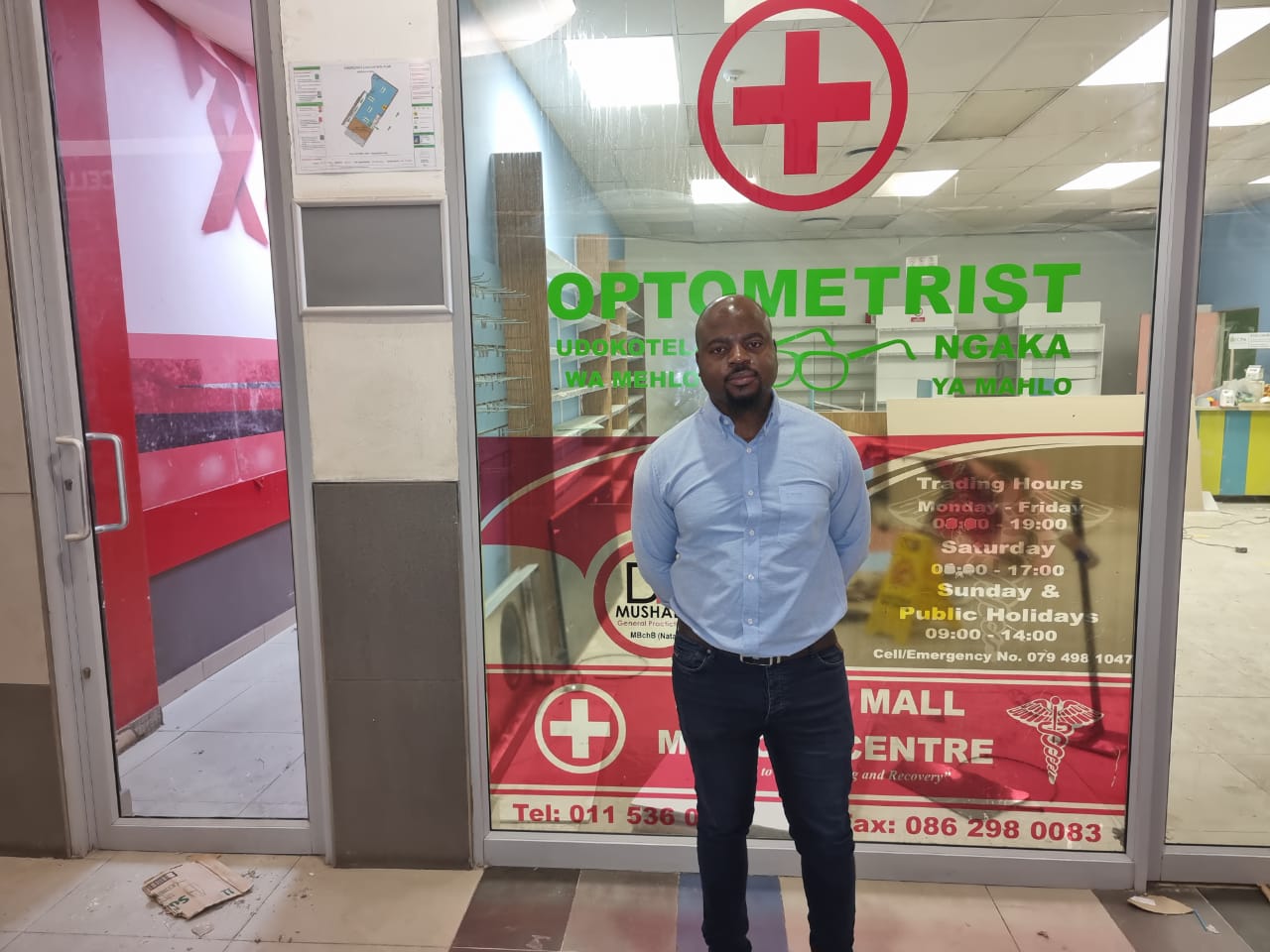 Dr Mpho Mushadu, a GP who sources described as 'popular within the community' for being a very good and conscientious physician. (Photo: Supplied)

‘I don’t feel anger. This thing is bigger than we think, when you look at the socioeconomic factors. Every time there is a protest, property is destroyed and no one is held accountable.’

Of all the looted malls visited by DM168 in the course of this investigation, one of the most shocking to encounter was Soweto’s Ndofaya Mall – because it is located literally across the road from the Meadowlands Police Station. This proximity to law enforcement was of no benefit to the shopping centre, which was looted so violently that 11 people died in a stampede trying to enter the mall.

The mall did not just house the usual supermarket franchises and fast-food chains. Another tenant was Dr Mpho Mushadu, a GP whom sources described as “popular within the community” for being a very good and conscientious physician.

Mushadu told DM168 that on Monday, 12 July, he went to his practice in the Ndofaya Mall as usual, but he made the decision to close up by 11am because there were already rumours of looting in the area.

“By Monday night, I was just getting messages about what was happening there,” he said.

“I thought [the looters] would take food. I never, ever thought they were going to loot my office. They took the computers, TV screens, cameras, surgical instruments, the fridge, all the medication…”

He said that when the looters could not drag out certain chairs because they were bolted to the floor, they slashed the chairs with knives.

To Mushadu, that suggests one thing clearly: “Their aim was to destroy things.”

Mushadu has moved into small temporary quarters nearby so that he can continue to help patients while he waits for Sasria to assess the damage and pay out insurance. He estimates his losses at R900,000.

When asked if he feels anger towards the looters, Mushadu demurs.

“I don’t feel anger. This thing is bigger than we think, when you look at the socioeconomic factors. Every time there is a protest, property is destroyed and no one is held accountable.”

In Mushadu’s view, good policing and good laws could prevent what happened to his office. He is still gobsmacked by the incredibly short distance between the Meadowlands Police Station and the mall.

But although police may have been sluggish in responding to the attack on the mall, there was one man who attempted single-handedly to stop the looting. The 52-year-old Mxolisi Duma manages four malls across Johannesburg, including Ndofaya Mall and the Naledi Mall in Vosloorus.

During the days of looting, while most mall employees kept their distance, Duma did everything in his power to try to save the malls.

On the evening of Sunday, 11 July, Duma had already succeeded in deterring some looters from the Naledi Mall – through strategic use of his motorbike.

“Two police vans were there when I arrived, but they were parked a distance from the centre,” Duma told DM168.

“I just reacted by revving my bike. It’s a powerful bike, and it can roar. When I rev it, the noise sounds like it’s a gun. And guess what: as I rev it, all the [looters] came out flying. They were running like they’d come across a ghost inside the stores! In about four minutes, everyone was out.”

The ruse only worked momentarily. Soon the looters realised that Duma was just one man on a motorbike – and turned on him. In the ensuing chaos, Duma’s bike was destroyed and his left wrist was broken.

But Duma was undeterred. Upon hearing the following day that the Ndofaya Mall was under attack around noon, he headed straight there. His attempts to alert the police were in vain: police insisted that they could see that the mall was fine, despite Duma’s protestations that looters were invading from the side of the building hidden from police view.

“When I got there, there were about 400 people looting Pep and Ackermans. I went inside and starting shouting and pushing them out. I was shouting at them to stop what they are doing. Some of them know me and listened to me.”

Duma lives just behind the Ndofaya Mall, and is a well-known community member. He says that after he succeeded in moving looters out of the mall and locking the gates, he tried to talk to local people to discourage them from further looting. He warned them how dangerous the situation was. Some listened, but others did not.

Around 5pm, looters returned in greater numbers. One lone policeman was stationed on the mall roof, and under threat from stoning. Duma managed to get the cop down to safety.

“I tried everything to get [looters] out of the centre. I even took a hosepipe and sprayed them with water. They surged forward, they stoned.”

In the end, even the indomitable Duma had to admit defeat: “Sometimes you know that you cannot save the situation,” he said. DM168