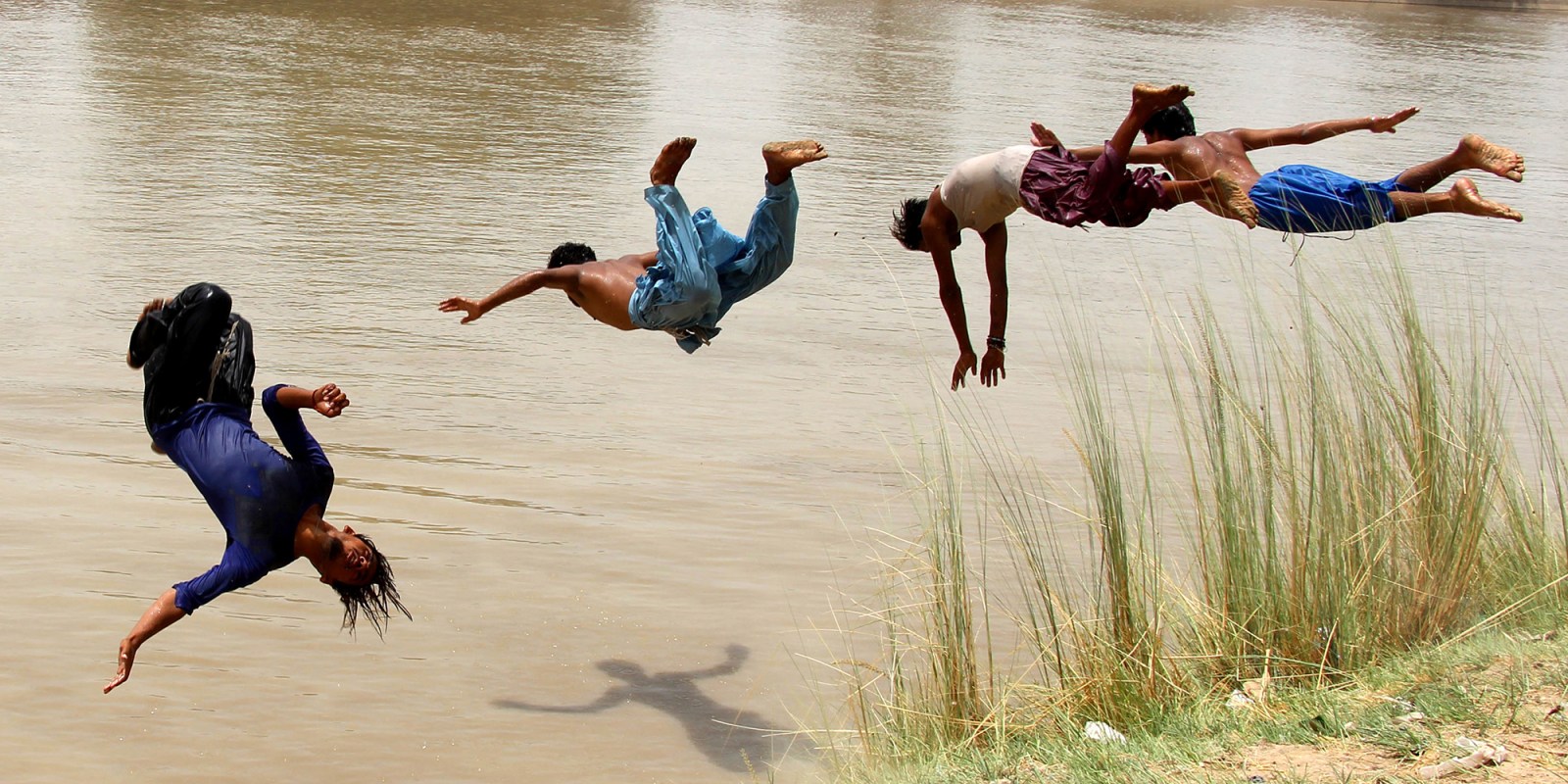 Pakistani boys jump in the water to cool off in a pond to beat the heat wave continues in Larkana, Pakistan, 26 June 2021. (Photo: EPA-EFE/WAQAR HUSSAIN)

Ahead of the release of the Sixth Assessment Report of the Intergovernmental Panel on Climate Change, it is noteworthy that the projections and assertions of increasingly confident climate scientists are happening apace, and that doesn’t bode well for the future unless substantial and sustained changes are made.

“Continued emission of greenhouse gases will cause further warming and long-lasting changes in all components of the climate system, increasing the likelihood of severe, pervasive and irreversible impacts for people and ecosystems.”

So reads part of the headline statement of the Synthesis Report of the Intergovernmental Panel on Climate Change (IPCC) Fifth Assessment Report (AR5) published in 2014.

Seven years later, in the middle of what the World Meteorological Organization has called a “summer of extremes” in the Northern Hemisphere, and days before the first part of the IPCC’s AR6 is released, many of the projections of the previous reports have seemingly come to fruition.

From severe flooding in parts of Germany, the Netherlands and Belgium, once-in-a-century downpours in China to record-breaking heatwaves over western parts of North America — the evidence is less suppositious and more certain than ever. This relatively new-found certainty is also reflected in the work of the IPCC.

On Monday, 9 August, Working Group 1 of the IPCC will publish its contribution to its Sixth Assessment report, titled AR6 Climate Change 2021: The Physical Science Basis.

Similar to these reports, AR6 contributes to humanity’s understanding of the physical science behind climate change. Read together with AR5 and AR4, AR6 is expected to be the definitive, most contemporary account of the climate crisis in the 21st century.

To understand how we arrived at this present — buffeted by an increasingly hostile planet — it may be useful to look to the past to see how key indicators have changed and how scientific confidence in attributing these changes in the climate system to human activity has evolved over the years.

The 2013 report expanded on this, saying: “Each of the last three decades has been successively warmer at the Earth’s surface than any preceding decade since 1850.

Given the events taking place across the globe, one would be forgiven for ascribing to scientists an oracular quality.

According to an analysis by Nasa, Earth’s global average surface temperature in 2020 tied with 2016 as the warmest year on record.

Integral as they are to the global climate system, the AR5 report says of the oceans that envelop most of our blue planet that, “Ocean warming dominates the increase in energy stored in the climate system, accounting for more than 90% of the energy accumulated between 1971 and 2010 (high confidence). It is virtually certain that the upper ocean warmed from 1971 to 2010, and it likely warmed between the 1870s and 1971.”

The above visualisation shows sea surface temperature data from January 2016 to March 2020.

Sea ice and the cryosphere are important indicators of the progression of human-caused climate change. The AR4 in 2007 reported that “satellite data since 1978 show that annual average Arctic sea ice extent has shrunk by 2.7 [2.1 to 3.3]% per decade, with larger decreases in summer of 7.4 [5.0 to 9.8]% per decade.”

Carbon and other biogeochemical cycles

One of the more prominent indicators of change can be found in the atmospheric concentration of greenhouse gases.

The AR4 Climate Change 2007: The Physical Science Basis report explained that the global atmospheric concentration of carbon dioxide has “increased from a pre-industrial value of about 280 ppm to 379 ppm in 2005. The atmospheric concentration of carbon dioxide in 2005 exceeds by far the natural range over the last 650,000 years (180 to 300 ppm) as determined from ice cores.”

The AR5 explained, however, that “carbon dioxide concentrations have increased by 40% since pre-industrial times, primarily from fossil fuel emissions and secondarily from net land-use change emissions”. It continues that in 2011, concentrations of carbon dioxide were 391 ppm, registering an increase of 12 ppm in the years between the two reports.

The latest measurements taken by Nasa in June of this year indicate that carbon dioxide concentration has further increased to 417 ppm.

Detection and attribution of climate change

A notable change that has taken place in the climate science space is the confidence with which climate change and its associated impacts can be ascribed to post-industrial human activity.

The 2007 report said, “The observed widespread warming of the atmosphere and ocean, together with ice mass loss, support the conclusion that it is extremely unlikely that global climate change of the past 50 years can be explained without external forcing, and very likely that it is not due to known natural causes alone.”

The report that preceded this was less confident, instead saying: “Most of the observed warming over the last 50 years is likely to have been due to the increase in greenhouse gas concentrations.”

By the time AR5 was published in 2013, the language was more direct and assured.

“Human influence has been detected in warming of the atmosphere and the ocean, in changes in the global water cycle, in reductions in snow and ice, in global mean sea level rise and in changes in some climate extremes,” reads one paragraph.

“It is extremely likely that more than half of the observed increase in global average surface temperature from 1951 to 2010 was caused by the anthropogenic increase in greenhouse gas concentrations and other anthropogenic forcings.”

Ahead of the release of the Sixth Assessment Report of the IPCC, it is perhaps noteworthy then that the projections and assertions of increasingly confident climate scientists are happening apace, and that doesn’t bode well for the future unless substantial and sustained changes are made — and soon. DM/OBP