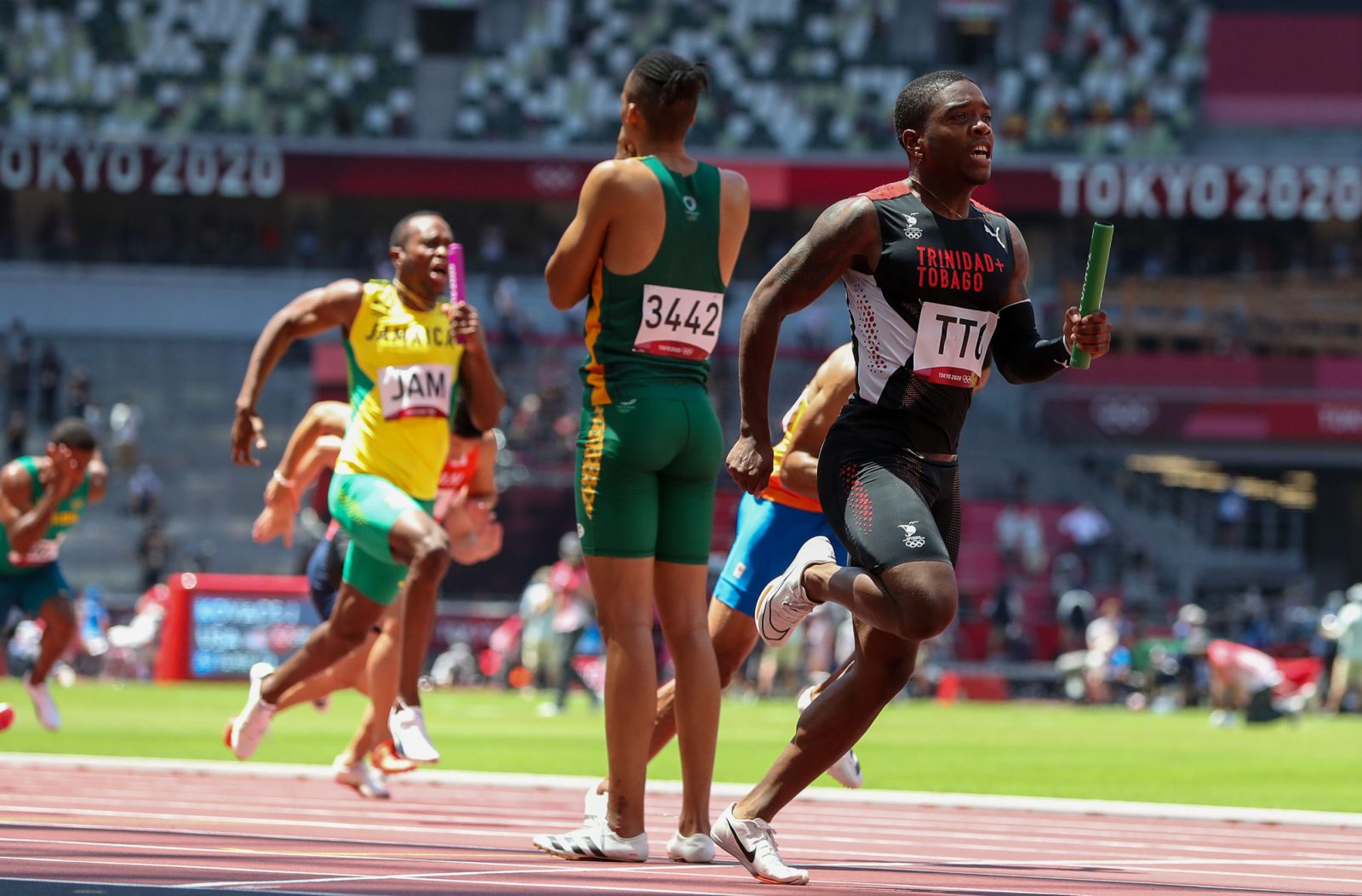 Chederick van Wyk of Team SA watches from the 200m mark as his teammates drop the baton in the Olympic men's 4x100m relay heats at the Tokyo Stadium on 5 August 2021. (Photo: Roger Sedres/Gallo Images)

Team SA’s men’s 4x100m relay squad won’t have a chance to add an Olympic medal to their World Relay title earned earlier in 2021, after they dropped the baton on the first changeover and failed to progress to the final.

It was a surprise that drew a few gasps from the smattering of watchers in the Tokyo Stadium, but not as many as a few minutes later when Team USA failed to make the final, only placing sixth in their semifinal.

Simbine, the anchor of the team, finished fourth in the men’s 100m final a few nights earlier, and Maswanganyi was a semifinalist in the 100m and 200m.

Munyai had come into the team at the 11th hour after Gift Leotlela suffered a hamstring injury in the 100m semis and was forced to pull out.

However, the dream came crashing down at the first changeover, when Munyai and Maswanganyi struggled to exchange the baton and the race was over before it had even had a chance to explode into action down the back straight.

“The way I practised exchanges with Clarence was at the same kind of exchange mark as with Gift,” Maswanganyi said after the race.

“Unfortunately, they’re two different athletes, two different runners. I came out [of the handover zone] the same way that I usually do with Gift, who is slightly different to Clarence… I guess when it was time for me to take my hand out he was already on me… so the problem was the exchange. It was [in] the exchange zone between me and me pushing out and me getting the stick.

“There should have been more practice, but coming into this race there had been a lot of changes that had to be made because of injuries and there were a lot of complications. We still tried to do what we could and it was just unfortunate.”

A bigger surprise came when favourites Team USA were beaten into sixth place in their semifinal and failed to make the final. With a wide array of world-class and sub-10-second sprinters to choose from, they were sloppy in their changeovers and despite including last Sunday’s 100m finalists Fred Kerley and Ronnie Baker in the team, were well beaten.

Trayvon Brommell, the world’s fastest man in 2021, was also in the lineup with Cravon Gillespie, who was part of the USA’s 2019 world championship-winning team.

But, despite the depth of talent on show, the changeovers were poor and a fumbling second handover cost them a chance of advancing, leaving anchor Gillespie, who was a controversial inclusion ahead of 200m silver medallist Kenny Bednarek, little chance to run down the leaders.

China won the heat in 37.92. Canada, brought home by 200m champion Andre de Grasse, were second, two-thousandths of a second behind, and Italy, helped by newly crowned individual 100m champion Lamont Marcell Jacobs, posted a national record 37.95 to also advance. Germany (38.06) and Ghana (38.08) also finished ahead of the Americans (38.10) to take the two fastest losers’ slots in Friday’s final.

The USA have won the sprint relay gold 15 times from 1920 but haven’t won it since the Sydney Olympics in 2000. With Jamaican Usain Bolt now retired, there was hope that the 20th century’s most dominant men’s sprinting nation would reclaim the title.

“The USA team did everything wrong in the men’s relay,” he tweeted. “The passing system is wrong, athletes running the wrong legs, and it was clear that there was no leadership. It was a total embarrassment, and completely unacceptable for a USA team to look worse than the AAU [Amateur Athletic Union] kids I saw.”

Also in action on Thursday morning at the Tokyo Stadium was big shot putter Kyle Blignaut. He performed admirably, recording 21.00m on his third throw which lifted him from ninth position after two throws, to fifth in the final.

He was later bumped down to sixth by Italy’s Zane Weir, but the 21-year-old will know that he “belongs” at this level of competition and will be looking forward to the next Olympic cycle with renewed confidence.

Michael McGlynn recorded the best performance by a South African swimmer in the Olympic 10km open water marathon when he finished eighth in a physical race in tough conditions.

McGlynn, still only 21, got stronger and stronger as the race progressed at Odaiba Marine Park. He calmly worked his race through the field as the laps ticked off, going from 24th to 15th, then 11th and finally eighth in 1hr 51min 32.7sec. DM