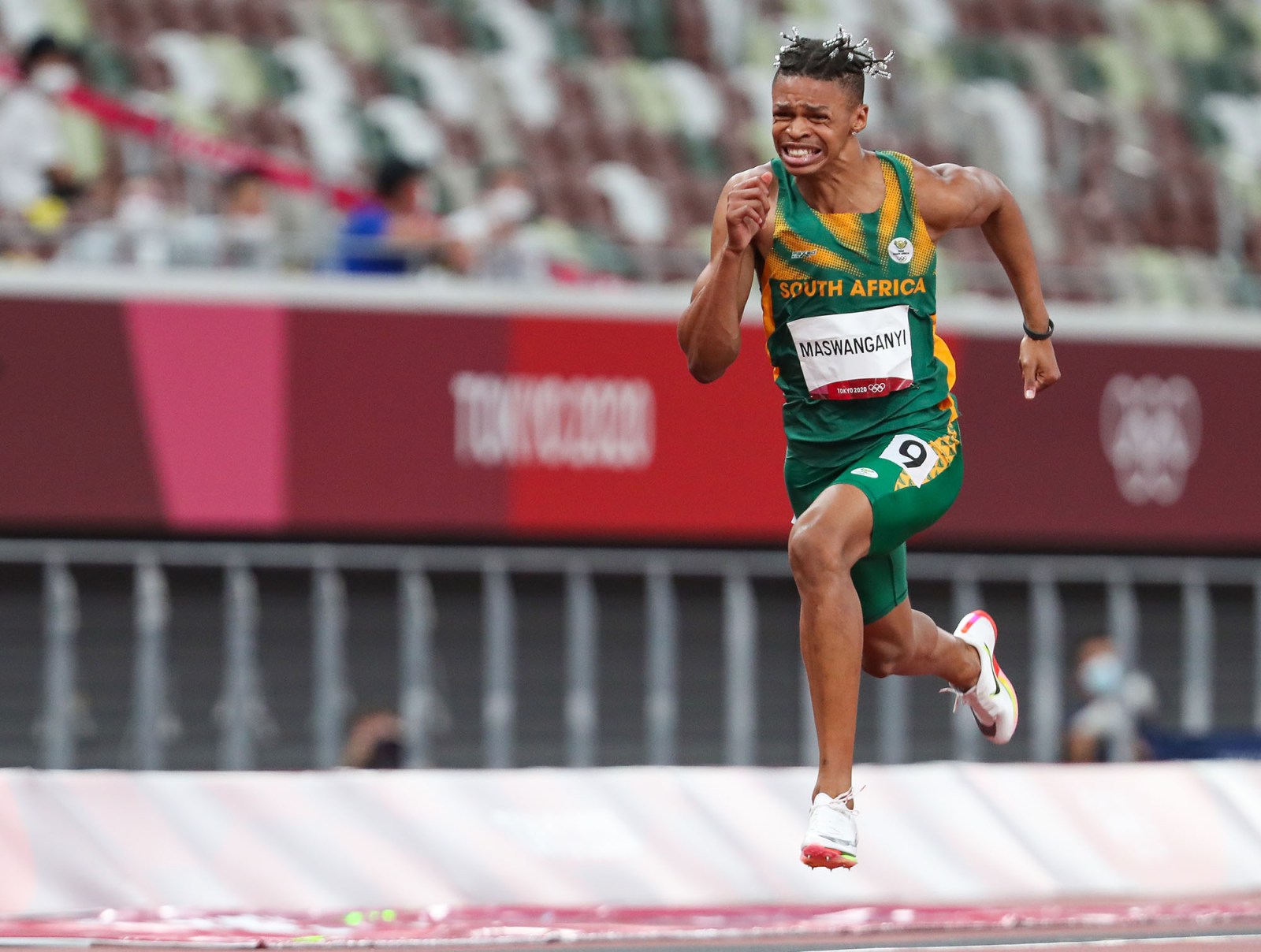 Shaun Maswanganyi of South Africa in the semi-final of the men's 100m during the evening session of the Athletics event on Day 9 of the Tokyo 2020 Olympic Games at the Olympic Stadium on August 01, 2021 Tokyo, Japan. (Photo by Roger Sedres/Gallo Images/Getty Images)

The fact that South African men’s sprinting is going through a boom period was emphatically underlined at the Tokyo Stadium on Tuesday night.

Although there weren’t any South Africans in the men’s 200-meters Olympic final on Wednesday night, there’s plenty to look forward to. Starting with next year’s Commonwealth Games in Birmingham, for instance.

The 20-year-old Shaun Maswanganyi, who resides in Houston, Texas, has the world at his feet — quite literally. He had reached the semi-finals of the 100-meters and doubled up by achieving the same in the 200-metres, which is his preferred event.

Having qualified in the morning for the semi-finals in 20.58sec, he shaved 0.40 off that time in stopping the clock in 20.18 in the evening.

That placed him fourth behind Canada’s Andre De Grasse and American Kenneth Bednarek. It was the quickest of the three semi-finals and both De Grasse and Bednarek went into the final as favourites to fight out the gold medal.

Although he was placed 10th overall out of 24 speedsters in the semi-finals, Maswanganyi was close to booking his place in the eight-man elite field on the biggest stage of all. Throw in the stat that his personal best is a 20.10, equalling that time on Tuesday night would have got him a place in the list of finalists.

That’s how small the margins are. At next year’s Commonwealth Games you can exclude the Americans — three of whom occupy the first six places on the 200-metre final timesheets at Tokyo 2020 — which shows what there is to look forward to when it comes to the 20-year-old Maswanganyi.

All three entrants in the men’s 100m reached the semi-final, as did all three in the longer 200-metres sprint. You can’t get any better than a 100% strike rate.

Anaso Jobodwana had come to Tokyo with a season’s best of 20.72 and a 20.78 timing in the morning heats had been good enough to earn him a place in the semi-final.

Although in contention around the bend, he was swallowed up by his rivals in the straight with no one going better than American Erriyon Knighton, who won the semi-final in 20.02. Jobodwana crossed in 20.88.

Clarence Munyai was next up and produced his fastest performance of the year: 20.49. However, this saw him cross the line in sixth position in an extraordinary race where the first three finishers were all credited with a 19.99 timing.

It needs to be pointed out that Munyai is still only 23 and the national record holder in the 200-metres.

Akani Simbine, who progressed to finish fourth in 9.93 in the 100m final, is the highest profile of the group, but others here at Tokyo have stuck their hands up to be counted as formidable forces.

Simbine was one of a trio to reach the men’s 100-meters semi-finals — the other two being Gift Leotlela and Maswanganyi — and in the longer sprint it was Munyai, Jobodwana and again Maswanganyi who qualified for the semi-finals.

While it augurs well for the future of South African sprinting, this is the now and each member of the sprint team has left an indelible impression. The men’s 4×100-metres relay springs into focus as a very real medal possibility later in the week. DM