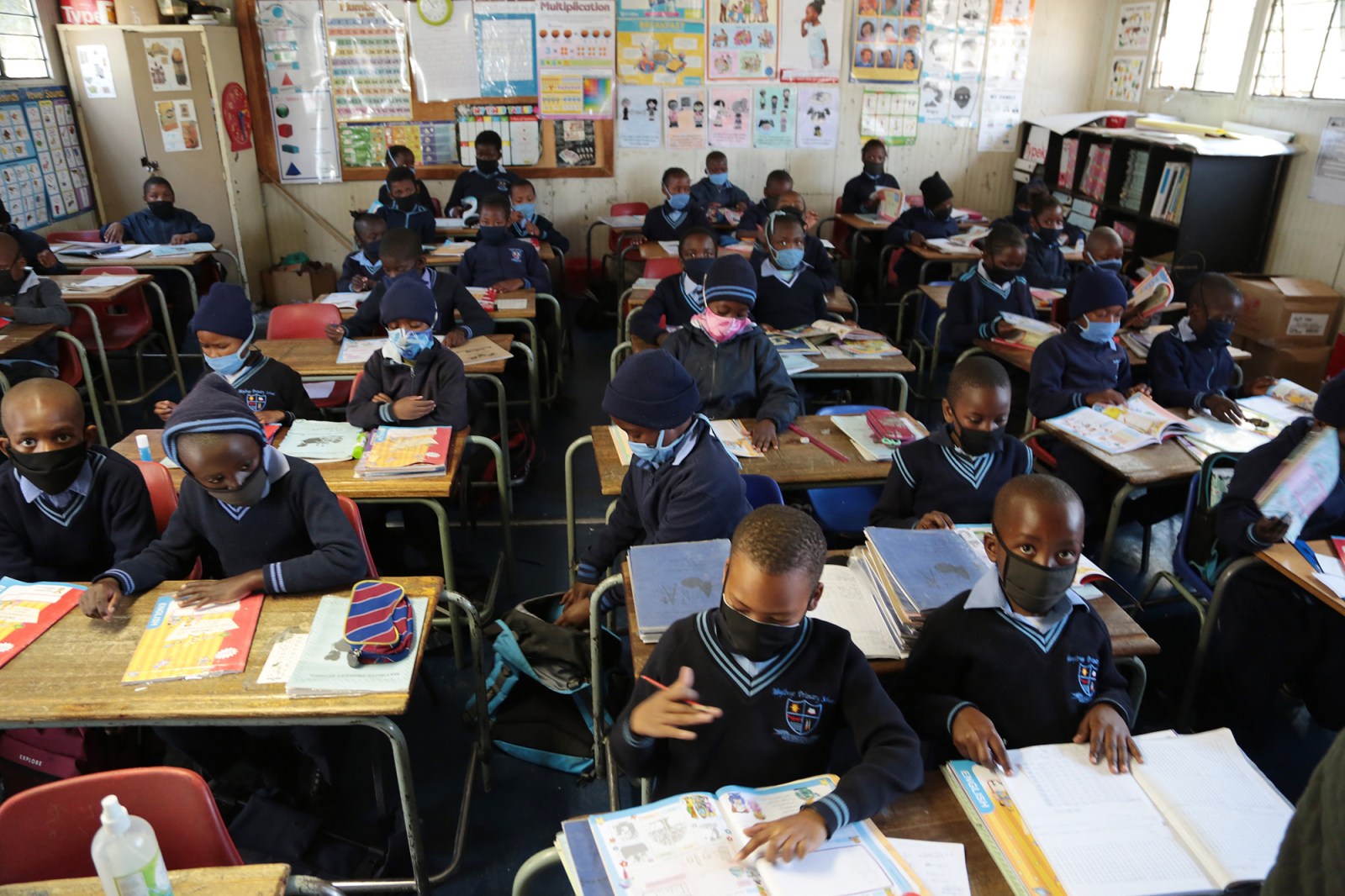 After more than a year of rotational and online schooling, all primary schools were due to return to normal daily schedules from Monday this week. But it became clear that it was impossible to adhere to the one-metre physical distancing rule at many primary schools. This meant some were unable to open at full capacity.

The plan for a smooth reopening of primary schools this week was hampered by the impossibility of physical distancing at many schools around the country. This led to the Department of Basic Education proposing a reduction in the one-metre distancing guideline, which has been met with pushback by teacher unions.

On Tuesday, Minister of Basic Education Angie Motshekga said she would table a proposal to the National Coronavirus Command Council (NCCC) calling for an amendment to the physical distancing regulation between pupils, reducing it from one metre to half a metre, as some primary schools struggled to accommodate all learners at full capacity.

Briefing Parliament’s basic education portfolio committee on the department’s readiness for the reopening of schools, Motshekga said: “I can say we are experiencing some problems with social distancing.”

Motshekga was visiting schools in Ekurhuleni and Katlehong in Gauteng.

“We have a good advisory from the National Advisory Committee which says we can still be able to safely reduce the distance, and that is what I need to go present at the NCCC.”

A final decision on reducing the distancing requirements between pupils will be made by the NCCC and Cabinet, education department spokesperson Elijah Mhlanga told Daily Maverick.

“The department will follow the advice given by scientists [and] will continue to make proposals that the health experts must consider and provide advice that can help the sector,” he said.

Mhlanga was unable to provide a national picture of the number of primary schools that have returned to full-time classes and those that are remaining on a rotational schedule, adding that the department would have a clearer understanding on Saturday.

On 1 August, the education department gazetted the new regulations ahead of the proposed reopening of primary schools for traditional and daily attendance at the start of the week.

All schools were ordered to ensure strict compliance with Covid-19 health protocols, including the wearing of face masks, washing of hands and sanitising, and adhering to the required physical distancing guideline of one metre between pupils.

The directions stated that schools able to receive all learners should open for daily attendance, and those that were unable, shouldn’t, said Mhlanga.

He confirmed that “schools that did not have the space to accommodate all learners with social distancing at one metre, experienced challenges” this week.

“What we saw this week was a situation where parents released their children to school even when they were not supposed to do so. Schools have since written letters to parents informing them about the continuing rotation timetable,” said Mhlanga.

The education department has observed that learners who come from poor households are better off in school, where there is a feeding scheme through the School Nutrition Programme, Mhlanga said. This contributed to the increased attendance in primary schools this week.

Some schools remained unable to resume full-time classes after more than a year of operating online and on a rotational basis.

In the Northern Cape, only primary schools “in full compliance with the Covid-19 protocols and guidelines” were allowed to return to daily attendance on Monday.

The Northern Cape Education Department said on Sunday that maintaining the mandatory physical distancing requirements among learners meant that only 79 of the 424 primary schools in the province could return to full capacity.

This meant primary schools “will require additional classroom space as well as teaching staff, which the department at this point is unable to budget for”.

“Key to this decision is the fact that more schools would need additional furniture, additional educators and adequate supply of water in order to ensure full compliance with Covid-19 protocols and guidelines.”

Additionally, a rise in Covid-19 infections in areas in the province has forced the Northern Cape education department to continue with a “differentiated timetabling model”, allowing most primary schools to operate on a rotational basis.

“We have communicated our provincial situation to the [national] Department of Basic Education and relevant stakeholders, that, for now, we will continue with the differentiated timetabling model, which is in the best interest of both learners and educators.”

In the Western Cape, 116 (11.5%) of 1,010 primary schools are operating at full capacity and are able to comply with all the health and safety regulations — including the one-metre physical distancing rule, Western Cape Education Department communications director Bronagh Hammond told Daily Maverick.

Thirty-eight out of 72 special needs schools have also returned to 100% capacity, she said.

“The majority of schools, however, cannot comply with the one-metre physical distancing rule, and therefore have been approved to continue with rotation,” said Hammond.

When it comes to primary schools in the province, 894 (88.5%) of 1,010 have been approved to continue with rotational schooling, she said.

Hammond added: “While the amended directions continue to limit capacity at schools, we hope that opportunities for increased capacity will be presented once the conditions allow for such a return so that traditional timetabling models can be met.”

This will be based on a change to the national Department of Basic Education’s regulations (reduction in one-metre rule) and advice from the relevant health authorities in terms of infections in the Western Cape, Hammond told Daily Maverick.

The education department in North West is still consolidating the precise number of primary schools that are operating on a rotational basis and those that are now operating at full capacity, North West Education Department spokesperson Elias Malindi told Daily Maverick.

“Those that are given permission to continue [with daily attendance], they are adhering to all these conditions,” said Malindi.

The KwaZulu-Natal Education Department issued a circular to all schools in the province, requesting them to indicate if they are in a position to welcome back all their learners, said spokesperson Muzi Mahlambi.

“Those schools that are unable to do so, have until Friday, 6 August to respond to the department as to whether they intend to continue a rotational timetable,” said Mahlambi.

Mahlamibi said there “were no issues” regarding lack of physical distancing in KZN primary schools “because the department is not forcing schools to return if they are unable to accommodate all students on a daily basis”.

In a joint statement on Wednesday, the South African Democratic Teachers Union (Sadtu), the National Teachers’ Organisation of SA (Naptosa), the Professional Educators’ Union (PEU) and the National Teachers Union (Natu) expressed concern with the intended move by the department to change the distancing restriction, citing a lack of consultation and scientific evidence.

Cembi said Sadtu had called on the department to maintain safety measures and “come up with a plan to address the challenges of overcrowding in schools”.

Sadtu has heard from its members in various provinces that the main issue in the reopening of primary schools this week was compliance to Covid-19 regulations and physical distancing, said Cembi.

In primary schools which accommodate all learners, physical distancing measures were not adhered to at all, she said.

“Our members are saying that to take what the Department of Basic Education says and apply it, is impossible — it’s not happening on the ground,” she said.

While Cembi acknowledged that facilitating the return to schools and ensuring safety measures are maintained was a “huge task”, she said the Department of Basic Education “cannot close its eyes and pretend that certain challenges don’t exist”.

The department should come up with a proper plan on how these things should happen, she said. DM