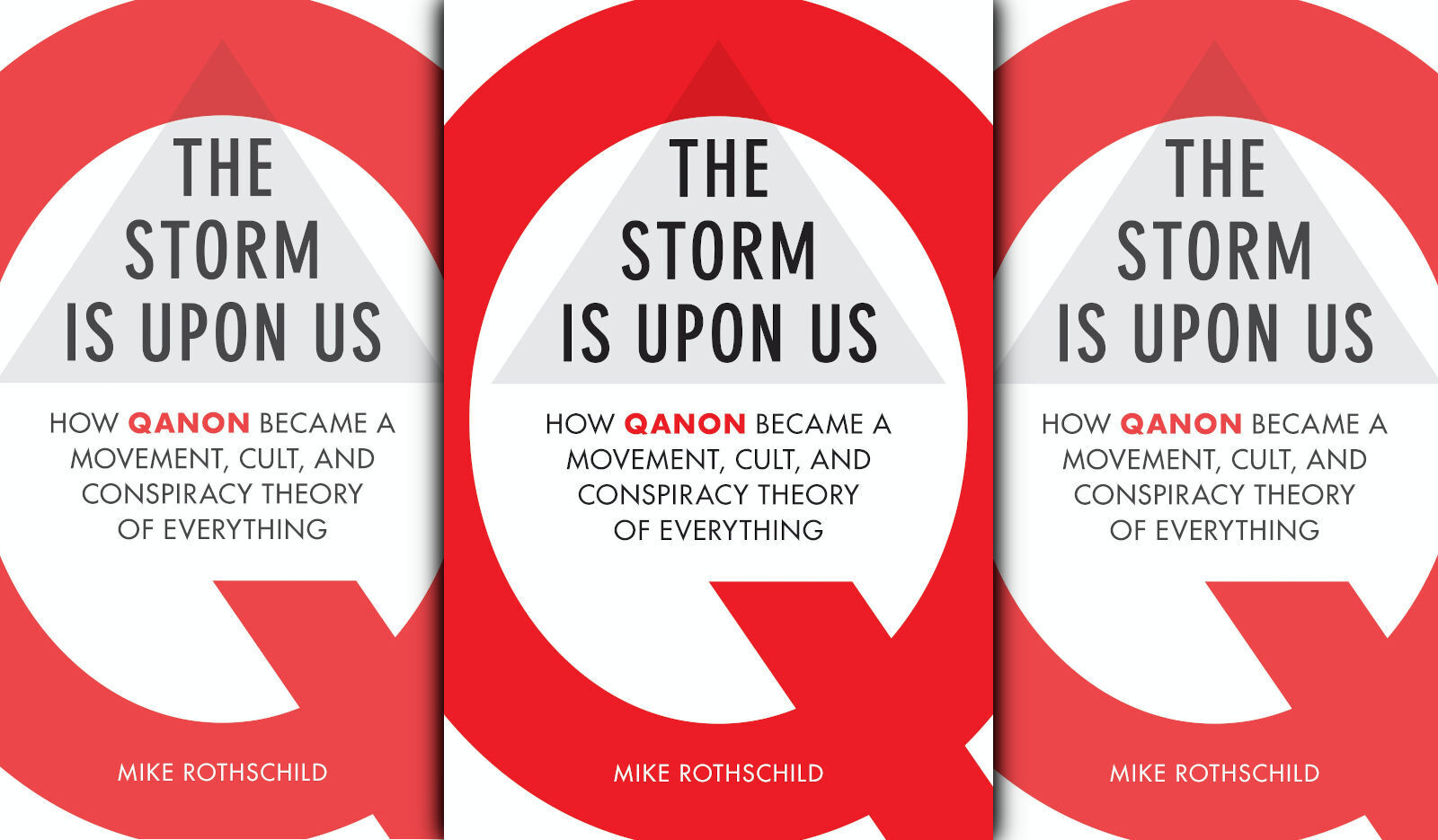 In his book, The Storm is Upon Us, journalist, author, and the foremost expert in the ever-changing QAnon conspiracy theory Mike Rothschild takes readers from the background conspiracies and cults that fed the Q phenomenon to its embrace by right-wing media and Donald Trump.

Its messaging can seem cryptic, even nonsensical, yet for tens of thousands of people, it explains everything. What is QAnon, where did it come from, and was the January 6th Capitol insurgency in the United States a sign of where it’s going next?

“This Is Not a Game”

The Many Crimes of QAnon Followers

“We don’t want to die,” the thirteen-year-old girl screamed.

She begged the person imperiling her to stop. She cried, she argued, some reports even say she tried to throw open the door of the moving van she and her brothers and sisters were trapped in. It was almost certainly the most terrifying moment she would ever face in her life, and she was barely a teenager.

Were this girl and her siblings the captives of a trafficking cabal? Potential receptacles for adrenochrome, mere moments away from a terrifying death at the hands of George Soros? No, they were trapped in a blue Honda Odyssey minivan barreling through Rockingham County, New Jersey, driven by twenty-nine-year-old Alpalus Slyman – their father. With the classic-rock station WROR playing the hits in the background, Slyman was fueled up by the belief that Hillary Clinton was a baby-eating demon, the government was trying to murder him, and only QAnon and Donald Trump could deliver him from this horror. And the police were right behind him.

Slyman’s police chase was just one of the many examples of Q’s mythology spilling into the real world in the form of domestic terrorism and violent extremism. Long before Q-pilled insurrectionists sacked the US Capitol, Q believers were committing violent crimes, kidnapping children, and even killing people. The Capitol attack was far from the first sign of Q’s potential for chaos. It was everything that came before.

While Q believers deny it, there is a basic element of violence at the core of the QAnon mythology. How could any movement based around a “secret war” between good and evil that ends with military tribunals and summary executions be considered anything other than violent? In fact, the language used to describe the stakes of QAnon is strikingly similar to that used by terrorists.

In a prison interview with the University of California Santa Barbara, professor of cults and religious violence Mark Juergensmeyer, the 1993 World Trade Center bomber Mahmud Abouhalima made it clear that he wasn’t trying to enact social change or “raise awareness” of his ideals when he helped detonate an explosive-filled van in the basement of the Center, killing six people. He was fighting “a battle between good and evil and right and wrong,” one that Juergensmeyer “just didn’t see.”

An unseen war between right and wrong is pretty much the crux of QAnon. I reached out to Professor Juergensmeyer to ask if I was overreacting by drawing a parallel between QAnon and Al Qaeda or ISIS – and it turns out, I wasn’t.

While Juergensmeyer believes that most Q believers will eventually move on to something else, “the exceptions are the dangerous ones.” Echoing the example of Mahmud Abouhalima, he continued that “these are the true believers who are willing to risk their lives to undertake an act, which we see as terrorism, [that’s] consistent with their ideologies.”

“The secrecy is part of the potency. It gives the followers a sense of smug satisfaction that they know something that everyone else does not know. Terrorist attacks are meant as much to assure the followers that there is a war going on as it is to shock the imagined enemy,” he went on. And then he said something that made my stomach drop: “When the United States was attacked on 9/11 much of the impact was due to the surprise – not knowing who did this and why. It is not inconceivable that QAnon followers could commit acts of this magnitude.”

QAnon has become both organized and violent much more quickly than any form of Islamic extremism. Al Qaeda had been around for well over a decade when its hijackers took control of four airplanes in the skies over the East Coast and used them to commit the worst attack on the continental United States in history. The Japanese doomsday cult Aum Shinrikyo similarly had been in existence for eleven years before its members attacked the Tokyo subway with sarin gas, killing thirteen and poisoning thousands in 1995. While nothing approaching this horror has come from a single or organized group of Q believers, the violent chaos perpetrated by Q believers at the Capitol proved without a shadow of a doubt that the potential is there. But it’s not just mass casualty events within Q’s grasp – smaller family tragedies happen all the time thanks to Q and the people who have given their lives to it.

From the breadcrumbs Alpalus Slyman left on Facebook through messages and livestreams (all of which are gone now), he seemed like a pretty ordinary guy who loved his family and video games. He harbored some conspiratorial beliefs – 9/11 trutherism, vaccine myths, belief in the Illuminati – but nothing that would seem to lead to a police chase and the potential death of his children.

But then came the Covid-19 pandemic, and a temporary layoff from his job as a baggage handler at Boston’s Logan Airport. Videos he uploaded hinted at desperation and financial stress. He started bingeing conspiracy videos. And sometime around the first week of June, he found the viral ten-part QAnon video series Fall of the Cabal. Within days, he began to see himself as a target in Q’s secret war. In the hours leading up to the police chase through Rockingham County, he’d been up all night, posting bizarre and troubling Facebook messages. He stated that Q was communicating with him through the classic hits playing on WROR (“I’m Still Standing,” “Band on the Run,” and the like). He claimed John F. Kennedy, Jr., had faked his death in a 1999 plane crash and would soon be returning to assume the vice presidency. And he appeared to believe that Barack Obama was born in Kenya and that Michelle Obama was actually a man posing as a woman – both common beliefs in the Q community.

The next morning, as his kids begged him to slow down, Slyman told both his children and the people watching his Facebook livestream that the police were trying to kidnap or kill him in a staged shooting and that “nothing was going to stop them.” He told them that his oldest daughter and his wife, who had leapt out of the car to get help when it slowed down below one hundred miles per hour, were in on the plot to get him. He claimed their neighbors were spying on him. And as Facebook commenters begged him to stop the van, he, in turn, begged his two champions to come to his aid: “Donald Trump, I need a miracle or something. Somebody. QAnon help me. QAnon, help me!”

Slyman was so new to the world of QAnon that he mispronounced it – “Q-AH-non,” rather than “CUE-a-non.” And he appeared to have some of the mythology wrong. But to the police chasing him, that didn’t matter. All that mattered was saving five kids from their own father. Eventually, with his tires blown out, he rammed a passing car, then rammed a police cruiser before finally crashing into a tree. He was arrested without incident, and his children were, miraculously, unharmed.

QAnon never did come to help him.

The story of Alpalus Slyman’s chase and capture would play out repeatedly in the realm of QAnon. The basic pattern is the same: complete and nearly instantaneous radicalization into QAnon after being led to it by extant conspiracy beliefs. Slyman had lost his job because of the pandemic, and he needed someone to blame for it. As he dove into the conspiracy theories promoted in QAnon circles – that the Covid pandemic was both a hoax and bioweapon (conspiracy theorists often simultaneously hold conflicting beliefs), funded by Bill Gates and George Soros to exterminate the bulk of the population – his behavior escalated rapidly. He believed that soon, they’d take his life. So he did what a digital soldier does: struck back before he could be struck.

That path had already been paved for him. DM/ ML

The Storm Is Upon Us: How QAnon Became a Movement, Cult, and Conspiracy Theory of Everything by Mike Rothschild by Octopus (R355).Visit The Reading List for South African book news – including excerpts! – daily.