Phoenix counts the cost of multiple deaths and murders... 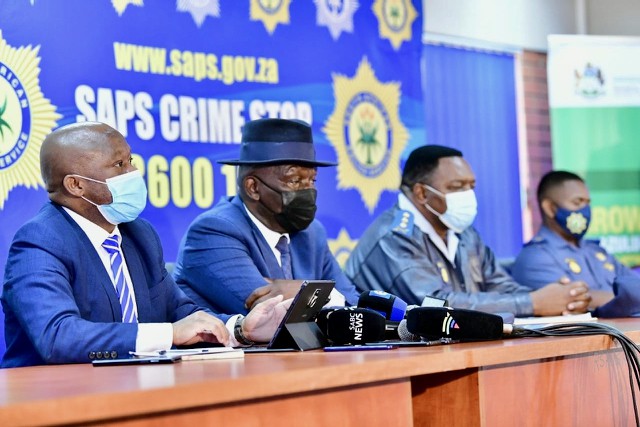 Minister of Police Bheki Cele provides an account of what police believe sparked the recent unrest and violence across the Durban township.

Two people were burnt to death, one was stabbed, one was run over by a motor vehicle, two died from injuries sustained when they were assaulted, and 30 people were shot dead. This was the grim confirmation of the cause of 36 deaths in Phoenix, north of Durban, during the July unrest, according to police minister Bheki Cele.

He was providing an update on law enforcement in Phoenix on Tuesday morning at Inanda police station, alongside KwaZulu-Natal Premier Sihle Zikalala and senior police officials.

Police are also investigating 52 cases of attempted murder and probing nine cases of common assault and 16 cases of assault with intent to do grievous bodily harm, said Cele.

He said a team of 31 experienced detectives have been deployed to investigate, make arrests and attend court cases to ensure justice prevails. “Working closely with the communities, their investigations have led to the arrest of 22 suspects so far,” Cele said.

Some suspects are alleged to be connected to several murder cases, while others face charges relating to attempted murder, malicious damage to property, and defeating the ends of justice.

Cele gave the following account of what sparked the violence: “The problem started when [on 12 July] some people operating checkpoints set up by community members turned to vigilantism and started racially profiling people, preventing them entry into the suburb.

“This amounted to unlawful discrimination and a restriction of movement for mainly African people. According to police reports, a vehicle [bakkie] with no registration plates, carrying looted items was stopped and searched at one of the checkpoints.

“Four male occupants of the bakkie fired shots at community members and the community returned fire. The four suspects fled into the bushes. The shoot-out resulted in four African males sustaining gunshot wounds, one of them died on the scene.

“Their vehicle was set alight. This incident, we believe, sparked other incidents of stoning and burning of vehicles and further violence, including shootings, stabbings and assaults,” he said.

Cele said that it is alleged that at these checkpoints in Phoenix, some motorists were allegedly forcefully taken out of their motor vehicles and then assaulted with baseball bats, bricks and sticks. Some people were butchered with bush knives and other sharp instruments.

“Aside from the detailed police reports that I have seen, I have heard personal accounts of residents from neighbouring Bhambayi, Zwelitsha and Umaoti,” said Cele. “They have told me how they narrowly escaped death while trying to enter Phoenix to access clinics and local pharmacy.

“I have also met with Phoenix community members who have condemned these savage acts and many are coming forward with information that is assisting police investigations.”

He said detectives are also investigating the role of private security firms in the violence. Cele said 152 firearms were seized from four private security companies and 112 illegal firearms seized during police operations in Phoenix.

He said calm has returned to the province. However, “we remain on high alert”, said Cele.

On Friday, ten men facing various charges in relation to the recent violent unrest in Phoenix appeared in the Verulam Magistrate’s Court.

The men, who made their second court appearance after the matter was adjourned for bail consideration a week before, face charges of murder, attempted murder, possession of stolen property, malicious injury to property, possession of prohibited firearm, unlawful possession of ammunition among other serious charges, according to the National Prosecuting Authority.

The accused appeared before the court separately. The men will be appearing at the criminal court in Verulam for a formal bail hearing on separate days during the course of the week.

On Sunday, members of the Phoenix community in Durban marched for peace and unity under the ‘All Lives Matter’ campaign, denouncing racism and all forms of violence and crime.

The marchers handed over a memorandum to the Phoenix police station. Their demands include that police should ensure the safety of all residents, and that all those who incite violence and fear be prosecuted. The Phoenix community is calling for a racially representative police team to investigate the killings in and around Phoenix.

At the Tuesday briefing, Premier Zikalala said, “We need to build harmony and coexistence among the people, especially in Phoenix and surroundings. On 28 July we hosted the Social Cohesion and Moral Regeneration Council. We are rolling out a programme that seeks to intervene in the areas of Phoenix, Inanda, Amaoti and all other surrounding areas.

“Last week, we hosted a Peace Walk which was led by religious leaders. We also hosted a soccer tournament through the organisations in Phoenix and Inanda and it was attended and addressed by Bishop Rubin Phillip. These programmes will not be the last or the end because we will continue with a number of events and programmes that seeks to bring together the communities in the affected areas.” DM