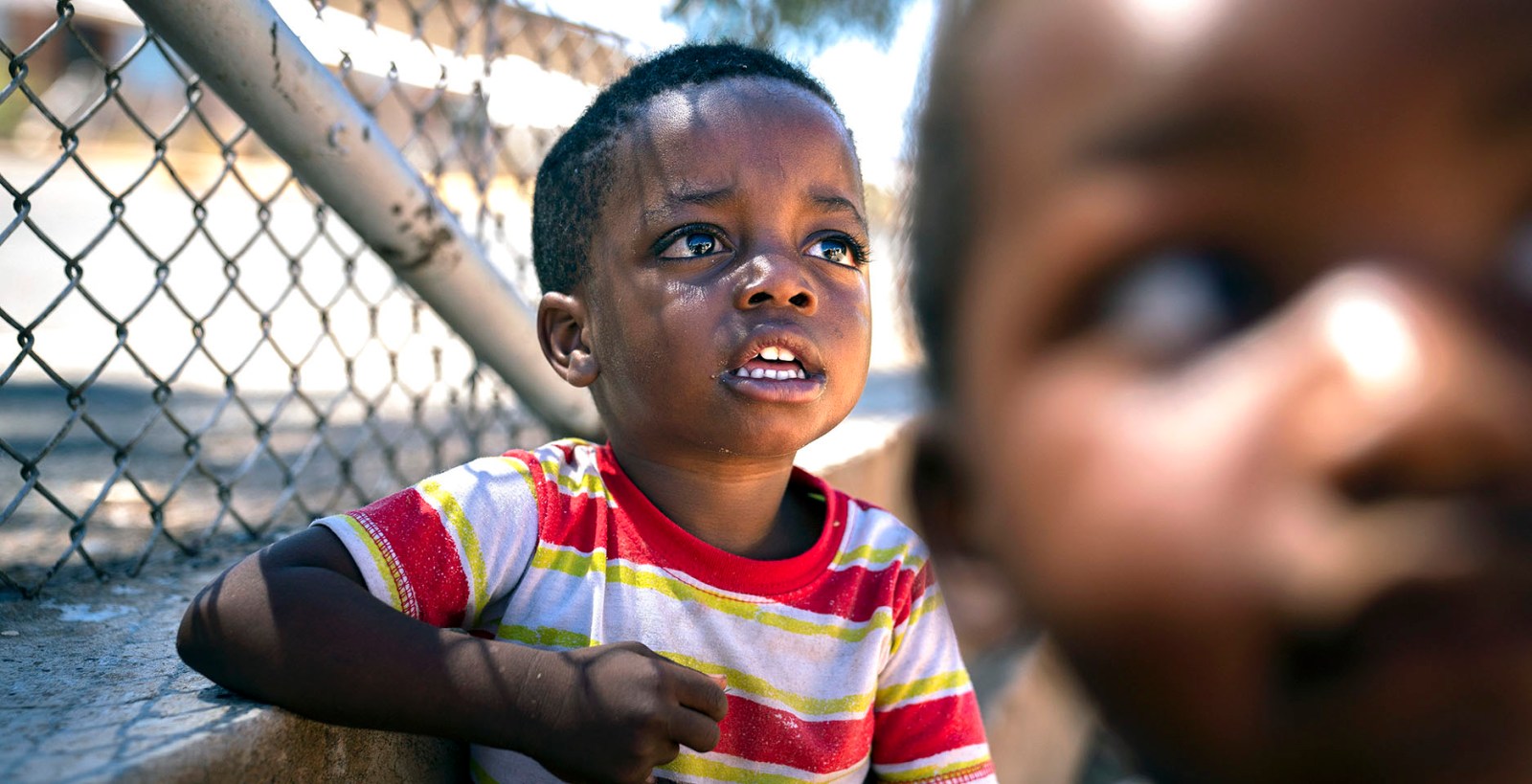 Children attend a crèche that is the beneficiary of the Compassionate Hearts soup kitchen in Touws River, an old railway town labelled as the doorway to the Karoo. (Photo: EPA-EFE / NIC BOTHMA)

On Tuesday the University of Cape Town’s Children’s Institute hosted the launch of a series of advocacy briefs developed by the institute, in collaboration with the Children’s Hospital Trust and the Michael & Susan Dell Foundation, calling for the government to put children at the heart of South Africa’s Covid-19 response and recovery plans.

The organisations argue that the impact of Covid-19 on children and their resultant needs have been overlooked in the measures that have been put in place to mitigate the pandemic. The advocacy briefs look at:

In a statement released at the time of the launch, the organisations quoted Professor Chris Scott of the Department of Paediatrics and Child Health at UCT as having said that:

“The initial health systems response to Covid-19 care focused on adults, who accounted for over 95% of cases in the Western Cape. Children’s needs were side-lined, resources were diverted from paediatrics to adult Covid-19 care, and concerns around infection prompted the separation of infants and children from much needed family support. Yet, over time, child health specialists succeeded in advocating for a more child-centred approach to contact tracing and the care of children in hospital.”

Speaking at the launch, the former director-general of the Department of Health, Dr Yogan Pillay, said it was not the children of the rich but the children of the poor whose future is affected and who suffer the socioeconomic brunt of colonialism, apartheid and now the Covid-19 crisis.

He emphasised that children must thrive and that it is not enough for them to just survive past their first birthday. Pillay also pointed out that, according to Stats SA, the pandemic had increased entrenched inequality rates in South Africa and as a result life expectancy for men and women had dropped by more than 3%.

Lori Lake from the Children’s Institute told those at the launch that severe malnutrition was a particular concern during the Covid crisis, with 47% of households reporting running out of food before the end of the month and one in seven households reporting a child going hungry because of a shortage of food.

Lake said that children’s mental health was particularly adversely affected, especially those with pre-existing mental health issues, most of which were brought on by the loss they experienced such as the loss of schooling, friends and loved ones. She said that for children to be able to handle “loss and adversity” South Africa’s mental healthcare for children needed to be better capacitated. Lake also highlighted that 750,000 children had dropped out of school because of the school lockdown regulations.

She said women were the hardest hit by unemployment, food insecurity and an increase in the burden of childcare. The burden of childcare had also increased as a result of the permanent closing down during lockdown of early childhood development (ECD) centres, which not only took care of children while parents were at work but was where one in six children had benefited from ECD food support, which they no longer received.

The CEO of the Red Cross Children’s Hospital, Dr Anita Parbhoo, said that Covid-19 had been challenging for child health services because there was not much information. She said it was important for her and her team to collaborate and share information with hospitals in Italy and the UK facing similar challenges.

“There were days where we made decisions in the morning and by the afternoon had to change… as new information came in,” Parbhoo said.

Key among these challenges was how to protect all children, and not only those with Covid-19, while balancing issues of children’s health, education and access to food, especially for those benefiting from school feeding schemes. However, Parbhoo said, the only guiding principles they had was always ensuring the best interests of the child and to talk about decisions going forward.

District clinical specialist Dr Nomlindo Makubalo said there had been an increase in hospital admissions of children as a result of abuse and poor “home circumstances”. Makubalo pointed out the need to empower children to speak for themselves as it seemed they were not seen as “full human beings” and ended up getting ignored.

“We need to bring children’s rights into realisation as a country,” Makubalo said.

Karabo Ozah, deputy director at the Centre for Child Law, explained the need to educate parents, caregivers and those in government about their obligations to children, which are stipulated in the Constitution.

“You can’t litigate or codify care,” Ozah said. She said the thinking needed to be about how to make people realise the long-term damage done when children are not cared for. Children were protected by the Constitution, the Children’s Act and the Schools Act.

Mark Tomlinson of Stellenbosch University brought up the example of  Michael Komape who died in a dilapidated pit toilet in Limpopo, saying that if children were more prioritised and put at the centre of the government’s plans, Komape would still be alive today. DM/MC