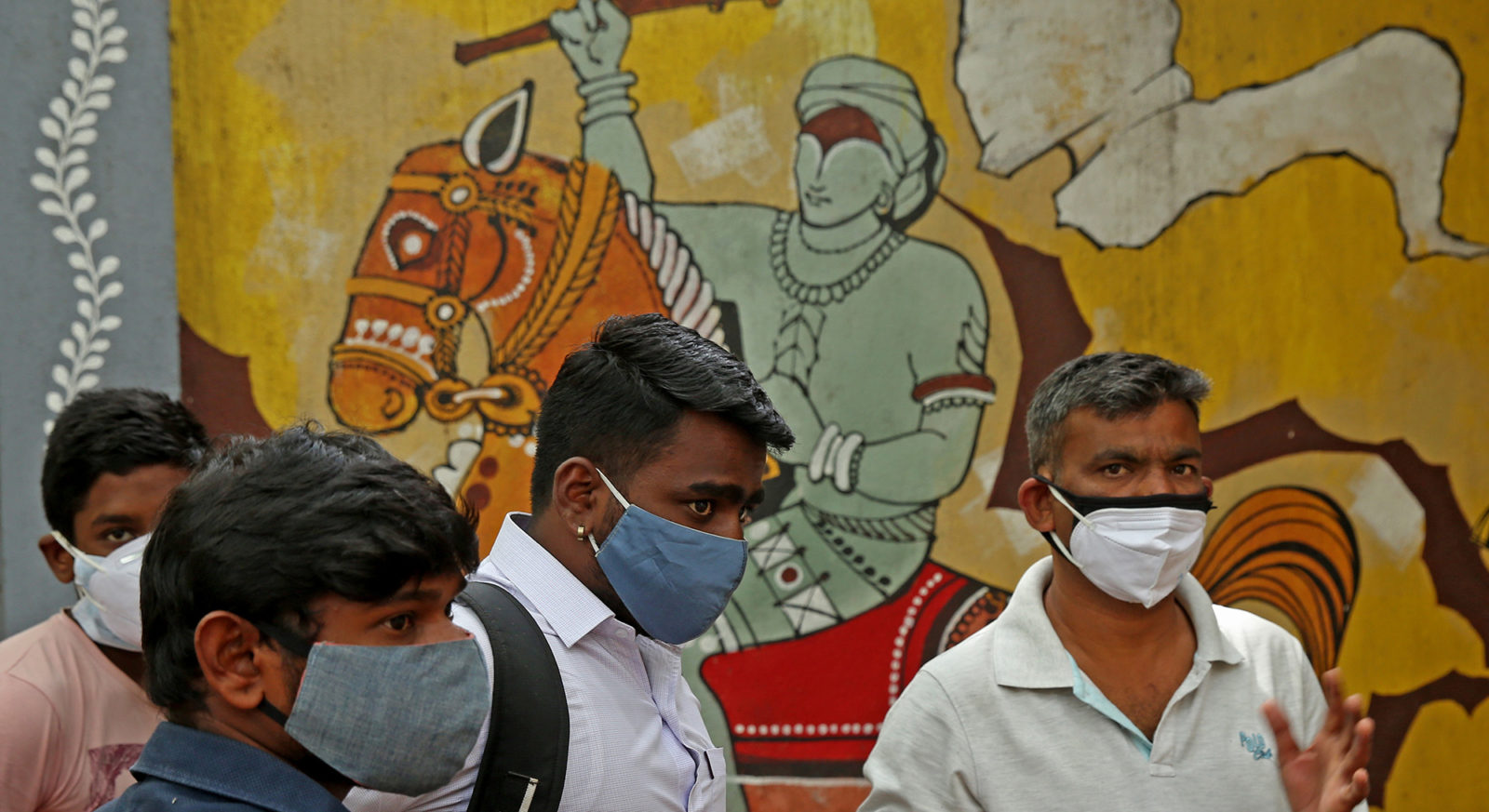 People wear a masks and stand next to graffiti painted on the roadside wall in Bangalore, India, in June 2021. (Photo: EPA-EFE / JAGADEESH NV) 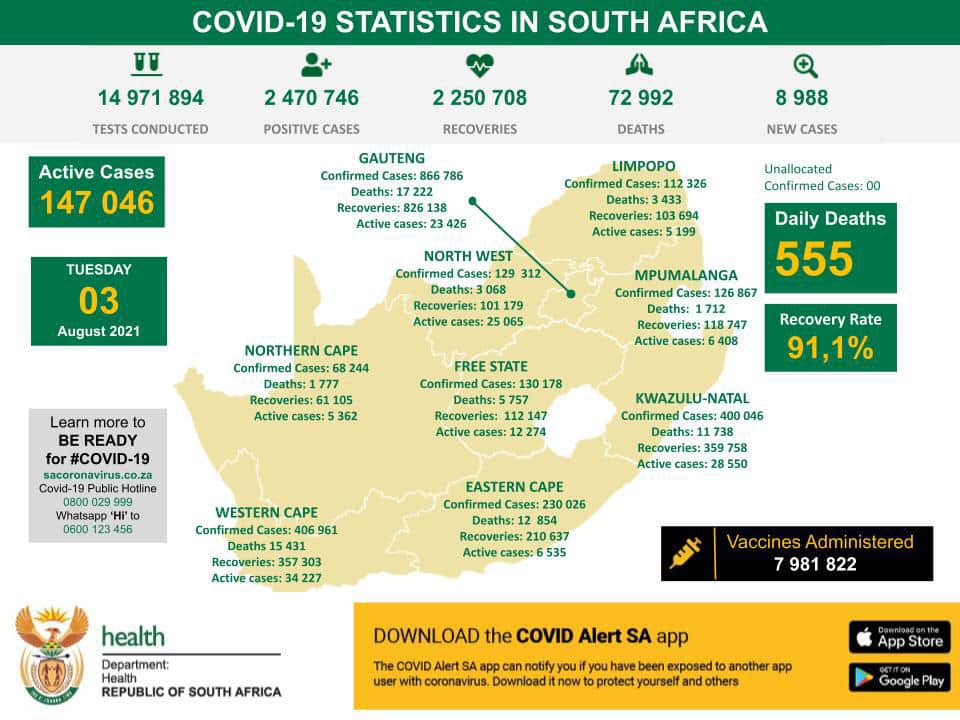 Tyson Foods, the US’s biggest meat company, is requiring workers at US offices to be fully inoculated by November 1. New York City will require anyone dining indoors at restaurants or exercising at gyms to show proof of their inoculation.

The spread of the Delta coronavirus variant has pushed the threshold for herd immunity to well over 80% and potentially approaching 90%, according to an Infectious Diseases Society of America briefing.

China’s outbreak continued to spread, with additional infections in various areas including Wuhan, where the pandemic first emerged. The capital city of Beijing will ban train passengers from 23 regions considered high risk, and the Haidian district where many tech companies are based recommended that people work from home.

Public schools in Denver will require indoor masks for students, teachers, staff and visitors when classes resume on August 9 “regardless of vaccination status,” Will Jones, a spokesman for the school system, said in an email. On Monday, the city announced all municipal workers, including teachers, must be vaccinated by the end of September.

The US government is in “active” and “sensitive” discussions about investing in a comprehensive pandemic preparedness programme, said Anthony Fauci, the nation’s top infectious-disease expert.

Speaking at a Tuesday event with the Center for Strategic & International Studies, a Washington-based think tank, Fauci said the US is continuing to plan for the future, ever-focused on how vaccines, therapeutics and diagnostics might be used to combat future pandemics.

In June, the Biden administration announced it would invest $3.2-billion in a new “antiviral program for pandemics” that would focus on developing medicines to combat Covid-19 and other viruses with pandemic potential. Fauci said the new programme is already working with companies such as Merck & Co. and Pfizer to aid with the trials of antiviral pills the companies have in late-stage development. He added the US would start deploying capital to discover other antivirals in 2022.

The programme is but one pillar of a more comprehensive effort to combat viruses and other threats, Fauci said. “It’s a really good start.”

Florida Governor Ron DeSantis’s move to bar school mask mandates is already working even as the state reports a record number of people hospitalised with Covid-19.

Less than a week after the Republican governor threatened to withhold state funding to school districts that require masks, two schools are backing down on such mandates. Broward County Public Schools reversed its masking rule, which the school board mandated just a week prior, in an effort to comply with the governor’s executive order that schools should leave masking decisions to parents, according to a statement on Monday.

Gadsden County School District had also planned a mask requirement for the coming year, but has reversed the order, according to WTVT in Florida.

Argentina to get 3 million Sputnik doses

The Russian Direct Investment Fund said it’s reached agreement to produce three million doses of the second shot of its Sputnik V vaccine in Argentina this month, after a presidential adviser in the Latin American country criticised delays in deliveries.

Laboratorios Richmond will start making Sputnik vaccines available in Argentina starting this week with an initial batch of 150,000 doses, Russia’s sovereign wealth fund, which is in charge of Sputnik’s international roll-out, said by email on Tuesday.

The number of people hospitalised with Covid-19 in Florida climbed to a record 11,863, even as Governor Ron DeSantis reaffirmed his stance against new public-health mandates.

Speaking at an event on Tuesday in Everglades National Park, DeSantis said the wave has so far been 70-75% less deadly than the previous ones.

“We’ve basically been plateauing,” he said. “When that levels off or goes down, all the other indicators follow that.”

Data from the Centers for Disease Control and Prevention – which is available only through July 30 – shows Florida’s emergency department visits with confirmed Covid continue to rise, but the pace of increases had begun to moderate somewhat.

New York City will require proof of vaccination for workers and customers at indoor restaurants and gyms, according to Bill Neidhardt, the mayor’s press secretary.

The move by de Blasio is the latest step to encourage New Yorkers to get vaccinated. City workers must get the Covid-19 shots or be tested weekly.

CureVac and Arcturus Therapeutics rose after Sanofi agreed to buy Translate Bio for $3.2-billion. Sanofi and Translate were partnered on Covid-19 vaccine development before the French drugmaker made a bid for the Massachusetts-based biotech.

Arcturus also said it got the go-ahead in Singapore to advance two mRNA candidates to a Phase 1/2 study.

Weekly cases in the Netherlands continue to fall with 21,005 infections reported on Tuesday, down from 37,343 in the previous week. The national health service said the country appears to have reached a peak in Covid-19 hospitalisations, with 541 new admissions reported in the past week, down by 23.

Scotland to proceed with lifting restrictions

Scottish First Minister Nicola Sturgeon confirmed the country will lift most virus restrictions on August 9, in line with the government’s plan and after a drop in infections.

Tyson Foods is requiring all of its US workers to be fully vaccinated no later than November 1. The move by Tyson, the US’s biggest meat company, is among the most aggressive yet to prevent another wave of infections that shuttered food-production plants in 2020.

Tyson, in a statement on Tuesday, said all company leadership must be vaccinated by September 24, all in-office workers by October 1 and all other employees by November 1.

Walmart, the biggest private employer in the US, and Walt Disney announced vaccination requirements for some employees last week.

The Chinese-made Sinopharm vaccine has failed to produce sufficient antibodies in a quarter of elderly people who were voluntarily tested in Budapest, according to a study by the opposition-led Budapest City Hall.

The results were published just as Hungarian Prime Minister Viktor Orban’s government, which has faced opposition criticism for having widely given Sinopharm shots to older people, started offering third shots this week for anyone who requests them.

Hungary, which has had the highest level of Covid-19 deaths per capita after Peru, was the only European Union country to have deployed the Sinopharm vaccine.

Indonesia called on local health officials to work with disability organisations, indigenous peoples and other groups representing vulnerable populations to administer vaccines to those who lack national ID numbers.

The government seeks to quicken the roll-out to 2.5 million doses a day in August, more than double the rate last month. Just 8% of the country’s population of 270 million is fully inoculated. Indonesia has topped the world’s tally of daily Covid-19 deaths recently, reporting 1,598 fatalities on Tuesday, with 33,900 new cases.

The Chinese capital city will ban train passengers from 23 regions considered at high risk for the virus, including Zhengzhou, Nanjing, Yangzhou, Shenyang and Dalian, according to a local government briefing.

A large part of Sweden’s population is likely to be offered a top-up dose of a vaccine next year, according to the Public Health Agency, with some risk groups potentially getting their shots this autumn.

The agency also said vaccinations in coming years are likely to be made using one or two mRNA vaccines and, potentially, also an adjuvant protein-based vaccine as a complement. It estimated access to shots will be good for the foreseeable future.

Separately, Greece is ready to start administering third doses for vulnerable groups, the elderly or for those with compromised immune systems starting in September once the vaccination commission gives the green light, Health Minister Vasilis Kikilias said on Tuesday.

The Haidian district of Beijing, where a Covid case was reported on Monday and where many Chinese tech companies are based, has recommended that people work from home and asked scenic spots to limit visitors to 60% of their capacity, the district said in its official WeChat account Tuesday.

UK Prime Minister Boris Johnson has blocked the creation of a controversial “amber watchlist” for foreign countries, the Telegraph reported.

The extra category in the government’s travel traffic-light system would have left popular vacation spots under threat of imminently turning red, forcing even the fully vaccinated to quarantine in hotels on their return. DM