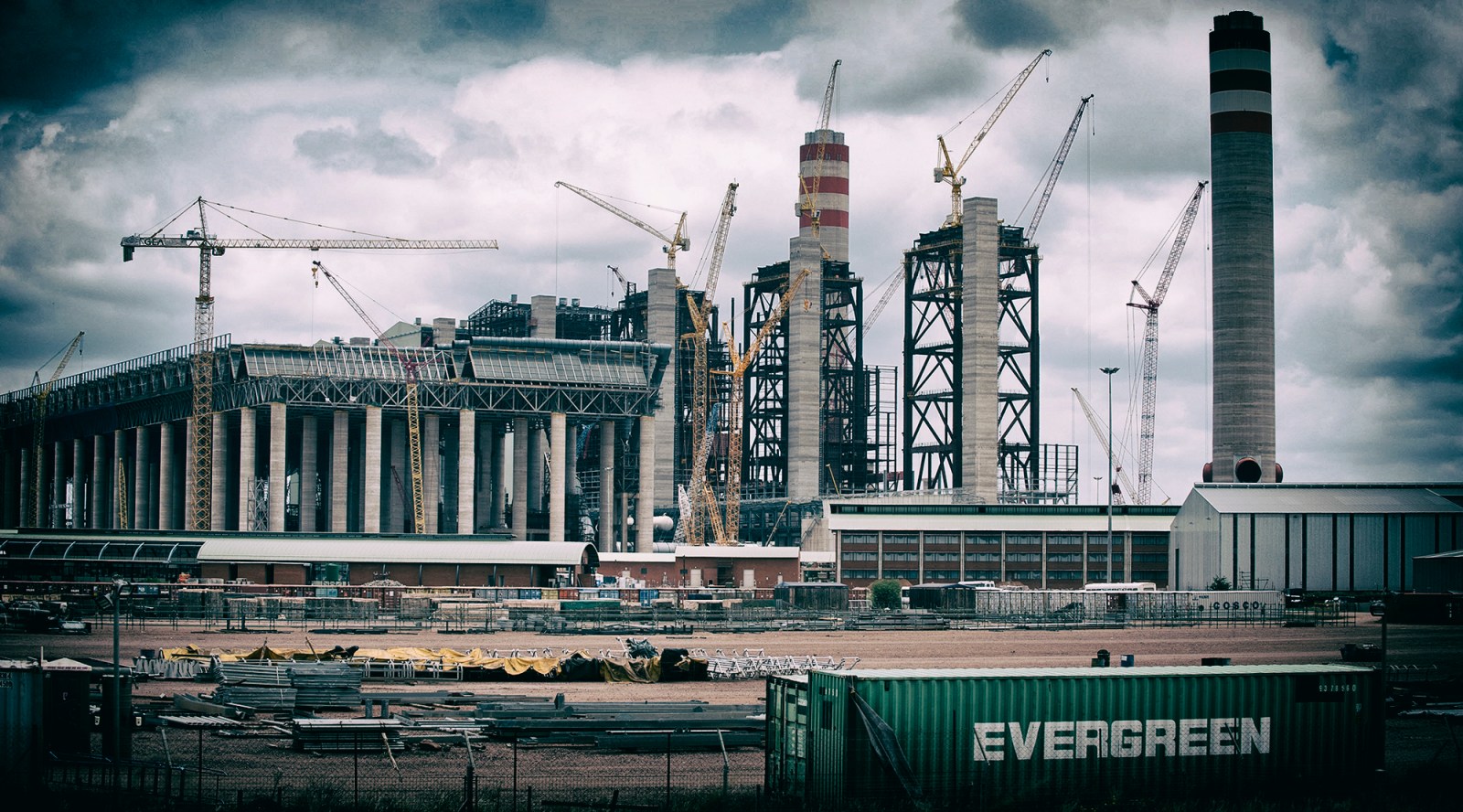 That the last unit of Eskom’s first mega-project in 30 years has come onstream is not cause for celebration. Medupi and its evil twin Kusile will be remembered — not for bringing power to South Africa — but for their abject lessons in poor leadership and questionable decision making, not to mention corruption, for which South Africa will pay for decades to come.

Eskom has announced that the construction of the Medupi Power Station in Lephalale, the biggest dry-cooled and most expensive power station in the world, has been completed.

Medupi is a 4,764MW power behemoth whose rampant appetite for coal will increase by 16-million tons a year.

Completion was announced after unit 1, the last of six generation units of the project, finally attained commercial operation status at the weekend.

However, commercial operation does not necessarily mean that it is performing optimally, which would assume an energy availability factor, among other things, of 90%. The current uptime is closer to 63.3% for the five units, excluding unit 1. This takes into account the fact that three units have had to be switched off for 75 days each to correct the design defects. And one is currently off.

Bheki Nxumalo, group executive for Eskom’s group capital division, says that work remains to be done. “What remains is the last part of implementing the agreed technical solutions related to the boiler design defects on the balance of plant. Once these repairs are completed during the next 24 months, Medupi will reliably deliver power to the national grid at full capacity, helping increase energy security for the country.”

The unit was first synchronised to the national grid on 27 August 2019 and reached the full load of 794MW on 5 December the same year. During this testing and optimisation phase, unit 1 began to contribute power to the country’s electricity supply — suggesting that its commercial operation will not miraculously increase South Africa’s power supply and may not dramatically affect load shedding.

“Unit 1 commercial operation is a historic milestone as it signifies the completion of construction for Medupi Power Station,” Nxumalo says. “This is an investment that will serve generations of the people of South Africa and power the economy for at least the next half-century.”

It should be cause for celebration. But South Africans, weary of persistent load shedding and escalating electricity costs, can be forgiven for their reluctance to applaud.

The power station comes online seven years after the scheduled date of delivery of 2014 and at almost three times the projected R56-billion price tag. It has been mired in controversy from before the first sod was turned, beginning with the acquisition in 2005 by the ANC’s investment arm, Chancellor House, of a 25% stake in Hitachi Africa. Hitachi Africa returned the favour over time, paying Chancellor House a $1-million success fee and $5-million in “dividends” in connection with the Medupi and Kusile contracts.

Hitachi was responsible for building the boilers at Medupi. It was, and remains, the largest contract signed by Eskom in its 90-year history, but whose shoddy design and workmanship is one reason for the delays. 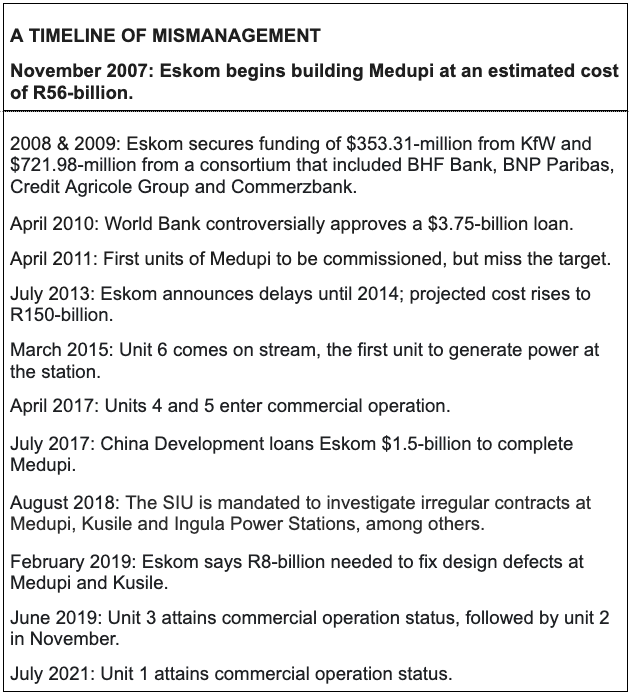 “In a project of this size, it is normal for the customer — Eskom — to appoint an independent contractor to oversee the engineering, procurement and construction (EPC). This contractor would then appoint sub-contractors for civil works, boiler works, the turbo alternator contract, ash handling, control and instrumentation and so on,” says Chris Yelland, energy expert and MD of EE Publishers.

The EPC contractor is responsible for ensuring the project is delivered on time, on budget and according to specification.

However, Eskom allocated the responsibility to Eskom Capital Projects because it believed the fee — usually 10% of project value — to be too expensive.

“Eskom had not done a big build in over 20 years… it had lost significant engineering and project management skills, yet it chose to take on all of that risk for a 10% saving,” Yelland says.

To add insult to injury, Eskom Capital Projects has handed an incomplete project to its client, Eskom Generation. “This would not have been acceptable had the contractor been independent,” he adds.

Thanks to megaprojects like Medupi and the half-completed Kusile, Eskom’s debt is now hovering at around R400-billion, a figure that has National Treasury tied up in knots trying to resolve. Eskom’s debt increased from about R30-billion in 2005/6 to close to R500-billion in 2020, but some R80-billion has been repaid. Over the same period, electricity tariffs increased 488% from 2006 to 2017.

In 2015 Eskom was downgraded to junk status by Standard & Poor.

As an additional bonus, Medupi will spew 32,000 million tons of carbon dioxide equivalent (this is a unit of measurement) into the air every year. Former M&G journalist Sipho Kings noted that this is “more than 115 other countries emit individually and is about 5% of South Africa’s emissions”.

One of Eskom’s commitments to the World Bank (in exchange for the loan) was that it would install “flue gas desulphurisation plants”, colloquially called “scrubbers”, at Medupi. This limits sulfur dioxide emissions. In terms of the agreement, this was to be completed by 2022.

Eskom has applied for an extension to 2025. However, Yelland does not believe the scrubbers will ever be installed. “Eskom is only entitled to one extension, but these scrubbers will not be built by 2030, which means Medupi will not achieve its environmental performance.”

While South Africa will take decades to recover from the cost inflicted on the economy by these megaprojects, the question should be, “what has been learnt?”

If the government’s current obsession with nuclear power is anything to go by, one hopes the answer is “a lot”.

“The nuclear industry is infinitely more complex,” says Yelland. “The regulatory and technical requirements are more demanding and the costs are huge. We need to understand the risks involved. South Africa had superb nuclear engineers, physicists and scientists, but now these are skills that are not in abundance.” DM/BM