Anti-Vax App Squares Off With Google, Apple Over Misinf...

Anti-Vax App Squares Off With Google, Apple Over Misinformation

Anti-Vax App Squares Off With Google, Apple Over Misinformation

Demonstrators gather during a protest against mandatory Covid-19 vaccinations for healthcare workers in front of Saint Mary Mercy Livonia Hospital in Livonia, Michigan, U.S., on Saturday, July 24, 2021. Trinity Health, which owns and operates the hospital and seven others in Michigan. will mandate employees to submit proof of vaccination by September 21.

(Bloomberg) -- A new social app designed as a community for the unvaccinated is testing Google and Apple Inc.’s policies concerning the spread of misinformation about Covid-19 vaccines.

Unjected, started by two women from Hawaii, bills itself as a community for “like-minded people that support medical autonomy and free speech.” The app allows users to make a profile, match and message with other members. It launched in May shortly after the largest online dating sites, including Match Group’s Tinder and Bumble Inc., introduced perks to encourage users to get vaccinated. Sometimes dubbed the “Tinder for anti-vaxxers,” Unjected has since racked up 18,000 downloads, according to Apptopia, and plenty of jokes on Twitter.

Though the platform began as a site for dating and friendships, it recently rolled out a social feed. A routine update to the app triggered a review by Google Play that found it hadn’t sufficiently policed user-generated content for misinformation. In emails to Unjected, Google flagged posts that included claims of vaccines being “experimental mRNA gene modifiers,” “bioweapons” and “nano-technology microchips” used to link people to the 5G network.

Google told Unjected on July 16 it had two weeks to remove the posts from its app store or get booted off. “We’ve had to walk a censorship tightrope,” co-founder Shelby Thomson said. Unjected removed the social feed to get back in compliance on Google Play but Thomson said she plans to restore it, along with the flagged posts, and hopes to “stay under the radar.”

Other features on the app that remain active include matches, chat rooms, a community directory of “unvaxxed friendly,” businesses and a database where users can list their blood types. “We’re not trying to be harmful to society,” said Thomson. “We just want to exercise our freedom of choice.”

Apple removed the app from its App Store after being contacted by Bloomberg News. In an email to Unjected, Apple said the app “inappropriately refers to the Covid-19 pandemic in its concept or theme.”

Apple requires all apps related to Covid-19 provide credible health and safety information and only come from recognized entities including government organizations, health-focused non-profits and medical or educational institutions.

Apple had originally denied Unjected during the initial review process and approved the app after it made changes to comply with Covid-19 policies, an Apple spokesperson said. Since then, “the developer has made statements externally to its users as well as updates to the app that once again bring it out of compliance,” Apple said, adding that Unjected encouraged users to avoid using certain words to avoid detection. “This is a violation of our guidelines, which make it clear: ‘If you attempt to cheat the system…your apps will be removed from the store.'”

Unjected’s views on vaccines have also resonated on Instagram where its account has almost 25,000 followers. The growing member base defies efforts by public health officials to boost vaccination rates as the highly contagious Covid-19 delta variant spreads across the U.S. Senator Amy Klobuchar recently introduced a bill to make online platforms like Facebook Inc., which owns Instagram, and Twitter Inc. legally liable for misinformation about health issues such as Covid-19. President Joe Biden said earlier this month that social media networks are “killing people” by allowing the spread of misinformation about vaccines. 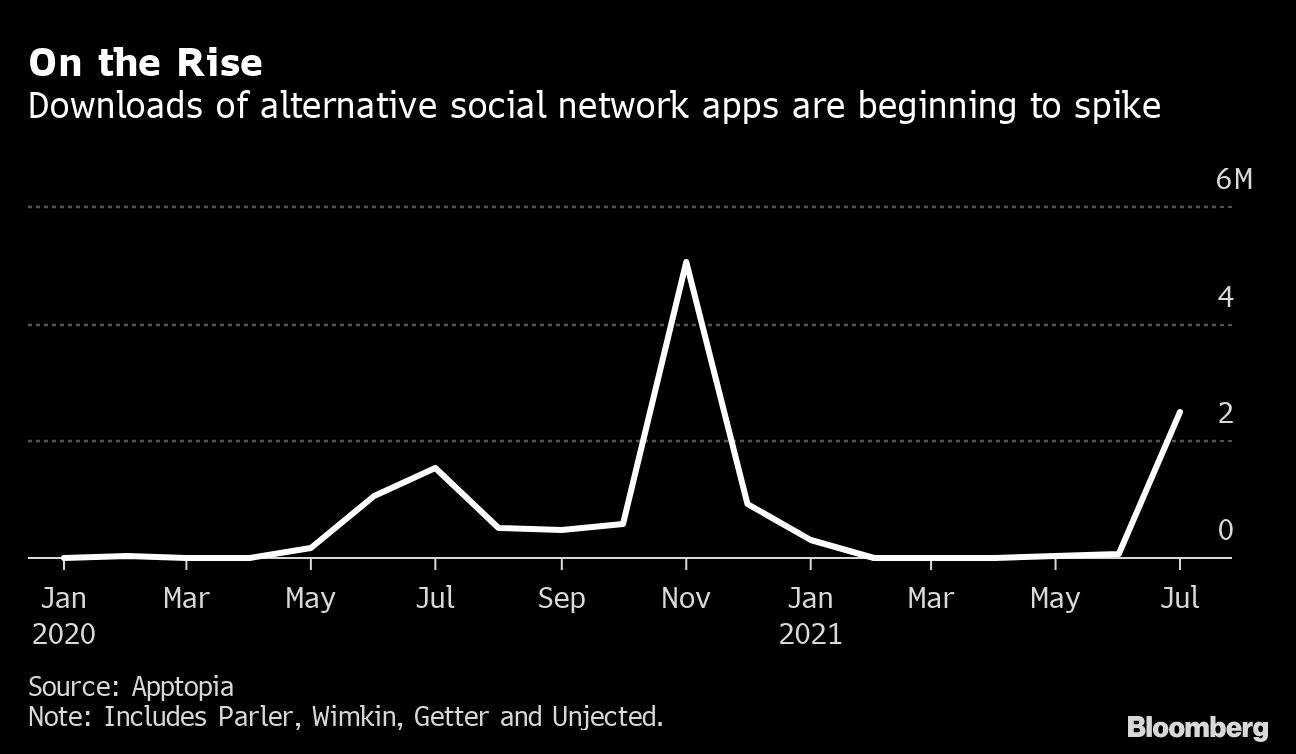 The intense scrutiny has led Apple and Google to increasingly crack down on apps popular with conservatives that have emerged as alternatives to mainstream social platforms like Facebook and Twitter.

In January the app stores banned Parler and Wimkin, both of which market themselves as free-speech havens, for inciting violence at the Capitol riots, though they have since been reinstated. Unlike Parler and Wimkin, Unjected’s platform doesn’t have a political leaning though it has found a warmer reception among conservatives, Thomson said.

Apple receives 100,000 App Store submissions per week to review for approval, on average, according to a company presentation. It has been criticized by developers for its stringent guidelines. Even so, some fall through the cracks.
“Apple and Google’s monitoring needs to be more robust,” said Morgan Reed, president of ACT, an organization that represents app makers. “But with millions of applications, it’s a game of whack-a-mole and they need to continue to step up.”