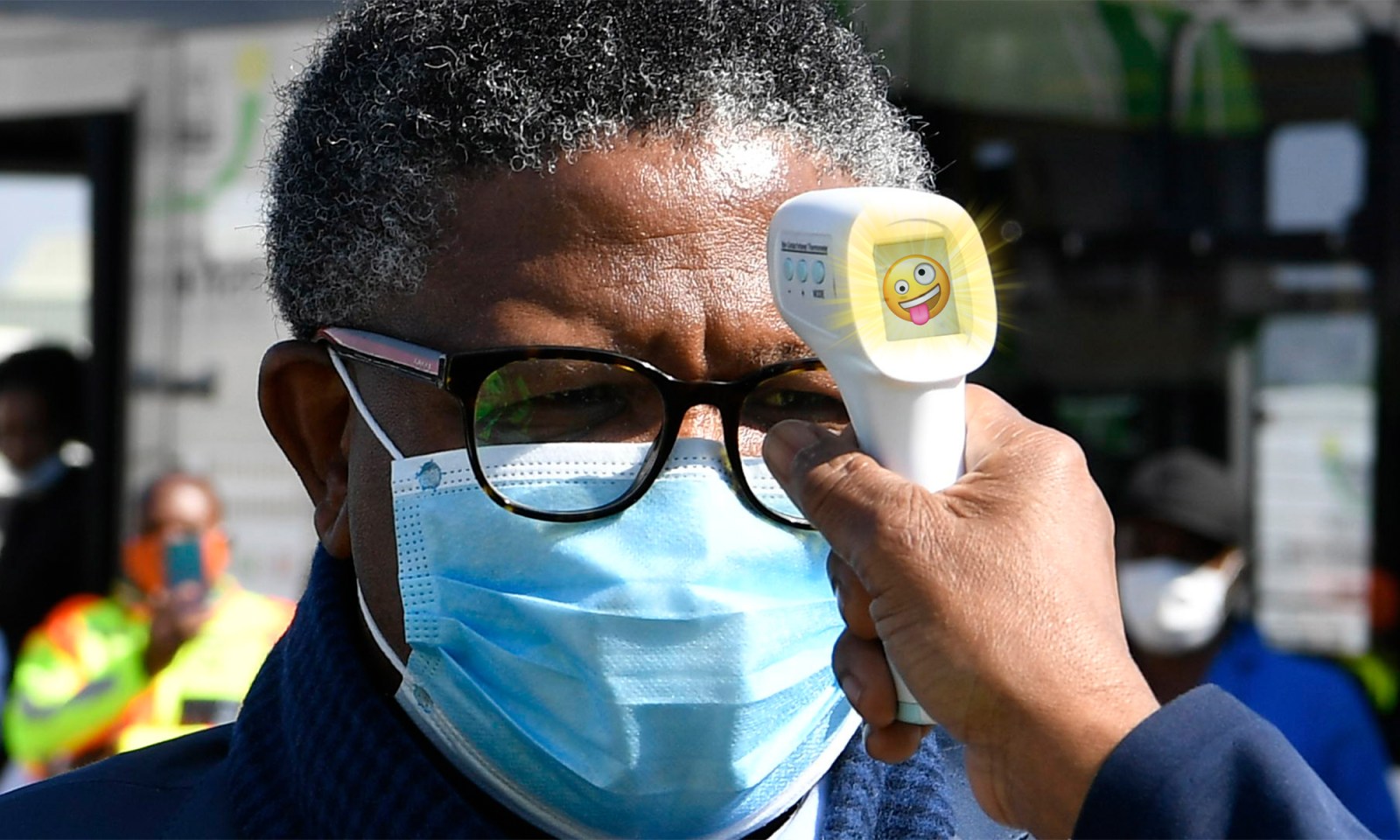 As a proponent of alternative ways of knowing, be it through psychic phenomena or watching highly informative investigative news shows like ‘Tucker Carlson Tonight’, for a while now I’ve felt that something was missing in popular discourse.

I trust this email finds you most ministerial.

Understandably, you must be very busy and in no mood to hear from random citizens. So, without further niceties, I’ll get straight to the point.

A couple of weeks ago, a newsletter from Woolworths informing customers that social unrest might affect stock and deliveries, drew my attention to a recent spate of local unpleasantries, circa early to mid-July. I looked a bit deeper into it and the whole thing got me in the worst kind of single-passport-holder funk. By the middle of that week, my chakras were so misaligned that I had to get in touch with my boss and call in South African for a few days. I did my best to avoid all channels screening any sort of looty programming; I subscribed to a number of mindfulness meditation apps and, bar a few Google searches checking out the sights, sounds, and visa requirements for Perth, I tried as much as possible to live in the moment.

But last week, just as my boss started checking in to see if I’d recovered from the case of South African, which had kept me in bed for almost a full week at that point, I came across your incredible BBC HARDtalk interview with Stephen Sackur. OMG April, you saved my life; in 24 glorious TV minutes, you inspired in me new ways of knowing, you restored my faith in our country and reminded me of the ingenuity of the South African mind. It really should be required viewing for all who breathe SouthAfricanAir®.

One of the most healing bits was when Sackur got a bit “Zuma this, Zuma that”, and you patiently explained to him that “at some point this was going to come as a result of incarceration; that with the former president’s arrest there will be chaos and anarchy in the country. IT DIDN’T HAPPEN!”

You had me at IT DIDN’T HAPPEN! My funk evaporated.

In a fine display of magnanimity, you also generously held space for those who would characterise looty July as more than it was. You explained that “the anarchy, as we have come to define it, came in guerrilla form”, and that your recovery plan was taking off and yet all your efforts were “being undermined by these sideshows that include this anarchy we’re talking about”. Ag man, askies tog. South Africans have no chill. Always another sideshow, always with a dash of anarchy. We must thank our lucky stars that this time, IT DIDN’T HAPPEN! Let’s raise our glasses to a better life for all.

As a proponent of alternative ways of knowing, be it through psychic phenomena or watching highly informative investigative news shows like Tucker Carlson Tonight, for a while now I’ve felt that something was missing in popular discourse ever since former Trump spokesperson Kellyanne Conway and the legendary Trump press secretary Sarah Huckabee Sanders retreated from the public stage. Something about the way the Biden crime family’s press people approach facts and truth seems a bit… traditional, flat, and underwhelming in its exploration of alternative facts. Say what you will about Conway’s dye job, but under that mane lies an alternate universe like no other, and her retreat from the world stage does a major disservice to a field of study she pioneered, alternative facts.

Which brings me to the reason for my mail. As I mentioned before, your interview reminded me of the ingenuity of the South African mind, especially in its refreshing refusal to acknowledge reality as fact. I do believe this is a concept, a way of living and viewing the world whose reach could go further than “alternative facts” ever could. I hope you don’t think me too forward, but I’ve gone ahead and trademarked a name for the concept. It is very much inspired by your way of looking at what some might consider objective truth, and I hope you will consider taking on a brand ambassador role. I’m calling it… drum roll… Mbalusional®.

It’s kind of like the traditional truth, call it truth-adjacent, but it allows gaps for alternative ways of knowing. It’s kind of like when you eloquently told Sackur that “well… eh… evidence it is overwhelming in a sense that from their recordings and the things that they planned and they threatened to… to be going to do they did”, and still, he wanted to know who “they” were and you were, like, “They are faceless, Steve… those we know at a political level is Carl Niehaus, who was in the forefront and some people around him.” And when Sackur pointed out that Uncle Carl hadn’t been arrested and claimed that “there is no face to this coup” as far as he could tell, seemingly agreeing with your earlier statement that they were “faceless”; you flipped it on him: “There is a face. The elements of it will deny that they basically physically were there to petrol-bomb.”

Brilliant April! You are so Mbalusional®! You’ll make the perfect brand ambassador.

I’ve already got in touch with a brilliant KZN-based communications company to spread the message of this new venture around the world; you’re gonna love them, they’re great at digital vibes. But let me not get ahead of myself. Charity begins at home and there certainly was a lot for locals to learn from your interview about how to apply the pacifying power of Mbalusional® thinking to their daily lives.

A whole week before your performance, Cyril went ahead and demonstrated a questionable grasp of the facts when he told the nation, rather matter-of-factly, that “we must admit that we did not have the capabilities and plans in place to respond swiftly and decisively”. Hence I was happy to see that when you got your moment with the international press, you did your best to rein in that one-sided view of the facts without appearing insubordinate as you told the world, “probably on our part response to this was delayed with a coupla days”. Based on his previous statement, Cyril might have used the word “definitely”, but no, none such one-sidedness from you, April.

You reiterated: “The might of the state was challenged, and we might have reacted in terms of time not on time.” Indeed, you might have, but we can’t know for sure. Don’t be too hard on yourself. It’s a conundrum perhaps best expressed when you told nitpicky Sackur: “You are very impatient with me… it was the reaction time we’re grappling with. I think we could have reacted much better and faster.” Mhmm… let’s think about that a bit more, April.

I must also express immense gratitude for giving us an Mbalusional® take on yet another ageing truth, the concept of self-government. As you explained how the faceless with faces were defeated: “They were defeated by the power of the people… later on complemented by a decisive action by the state deployment in affected areas.” Complementary government! Kind of like a complementary biscotti with your flat white; never guaranteed, totally optional and based on availability. Loves it!!!

But, I found you most impressive in your ability to shift gear and embrace more conventional notions of truth. As you had no doubt watched the July unpleasantries on Twitter, and perhaps read reports of 200 malls and 3,000 shops being looted and damaged; 200 banks and post offices being vandalised, and reports of some 150,000 people whose jobs are at risk, not to mention the death toll; you placed the ball exactly where it belongs, in the hands of ordinary South Africans: “If ever South Africans did not believe in government… there would have been an upsurge and this country would have been in flames and we would not even be here to talk to you. The masses would have risen. They didn’t.”

LOLz, April, you’re a natural! Like… I get that you’re not suggesting that fire is the only language of disapproval your government understands.

But also like… “the masses” didn’t burn the country down, and my Woolies order just got delivered, so it’s like… totally chill. Sure, things got a bit looty tunes… and a bunch of faceless people but with faces and also around Carl Niehaus were basically physically there to petrol-bomb and trying to create chaos and anarchy in the country, but like… IT DIDN’T HAPPEN, and the anarchy as we have come to define it, like… came in guerrilla form.

I swear, we have reached peak Mbalusional®!