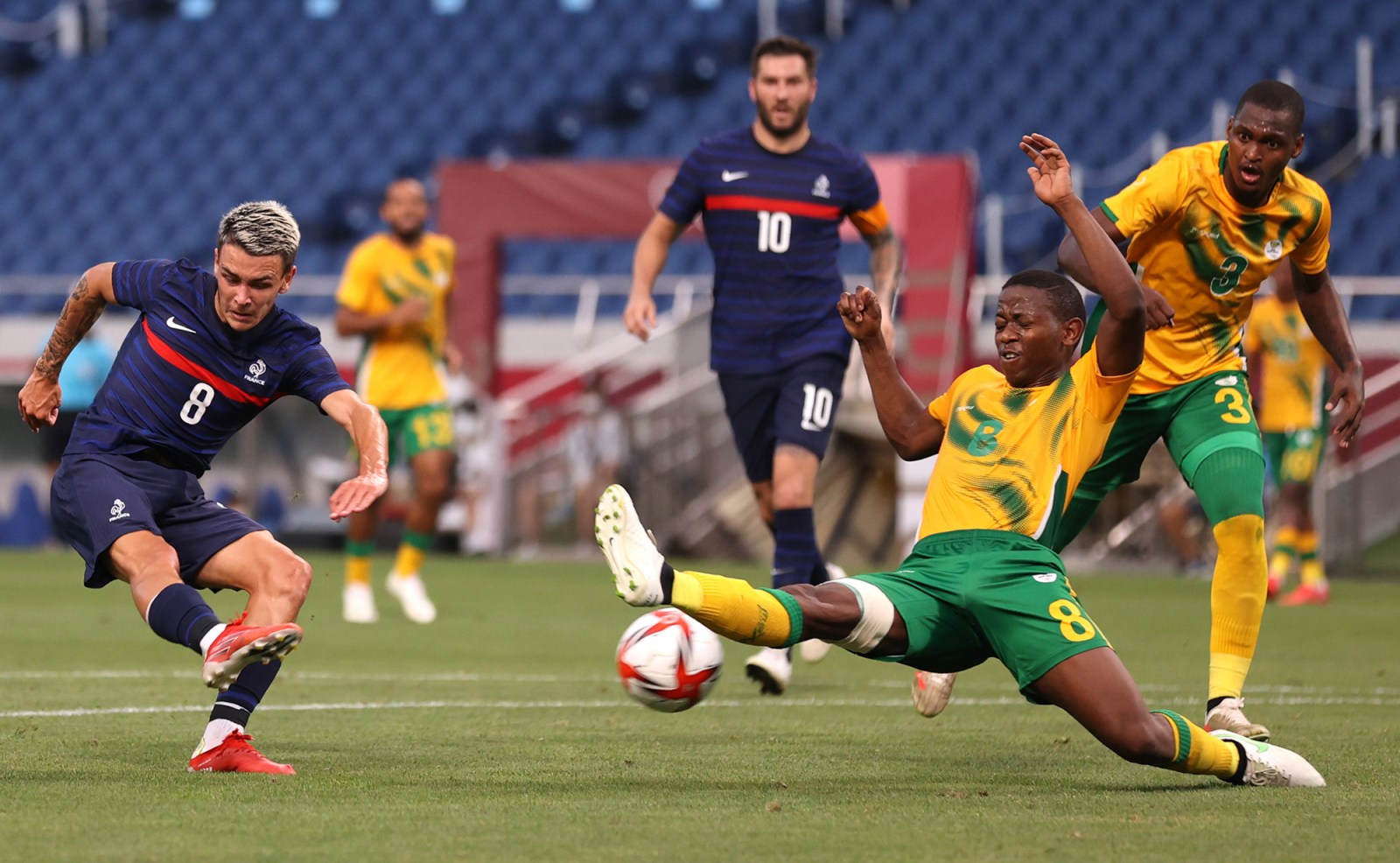 Enzo Le Fée of Team France shoots while under pressure from Thabo Cele of Team South Africa during the men's first-round Group A match of the Tokyo 2020 Olympic Games at Saitama Stadium on 25 July 2021 in Japan. (Photo: Naomi Baker / Getty Images)

The SA soccer men’s team walked away with a new and unflattering personal record after failing to earn a single point in the group phase of the Olympic football tournament.

The future of South African football is bleak. For the first time in its history of competing in the under-23 football tournament at the Olympics, the country was knocked out of the group stage without accumulating a single point. This after suffering an emphatic 3-o loss to Mexico in their final group game at Tokyo 2020.

They had previously managed three group stage points in Sydney 2000 and two in Rio 2016. They did not qualify for the Games in other years.

Goals from Alexis Vega and Luis Romo in the 18th and 43rd minutes respectively, and a third by Henry Martin on the hour mark, saw Mexico qualify for the knockout stages, second on the log standings as hosts Japan, who beat France 4-0, qualified as group winners after winning all of their three matches.

“We have to dust ourselves off and face the South African public for having disappointed them in terms of their expectations of us. It comes with the game. So, we have to show a lot of emotional intelligence, emotional maturity, and of course be accountable for the results we faced here in Tokyo,” said coach David Notoane after their elimination.

“Hopefully the boys will graduate and take this experience into Bafana Bafana, as we strive to make Bafana a better team in the future.”

Having been edged 1-0 by Japan in their opening game, the South Africans went on to suffer an agonising 4-3 loss against France. It was a game they should have won after thrice taking the lead, only for the Europeans to equalise each time, before netting the winner in added time. All seven goals were scored in the final 30 minutes of the match.

The France match was also the one that best summed up some of the deficiencies of South African football. It was a case of unfulfilled potential. In that game, despite their ability to find goals thanks to some exciting forward and midfield play, they were caught flat-footed by the four French goals.

“Difficult evening. Not much in the legs of the boys,” said Notoane, reacting after the trouncing at the hands of the Mexicans.

The France game, he said, “took a lot out of us, and it showed today. Overall, we’re disappointed to be out of the tournament. I think we can take a lot of lessons out of this tournament going forward, in terms of how mistakes are punished at this level.”

One man who will be left scratching his head by the displays of the football team at the Olympics, particularly at the back, is Bafana Bafana coach Hugo Broos.

The Belgian had cited South Africa’s leaky defence as one of the most pressing issues he will seek to address as he attempts to rejuvenate and re-energise an ailing Bafana side.

Broos, who was appointed by the South African Football Association (Safa) following South Africa’s failure to qualify for the 2022 Africa Cup of Nations (Afcon), has previously said of Bafana’s rearguard deficiencies:

“There were some things that for me were a bit surprising. For example, in the games for Afcon [qualification] I saw that it was very difficult for the team not to concede a goal… This is something we have to work on.”

Notoane’s side conceded eight times across their three Group A games, with some of the players in that frail defence expected to be genuine contenders for spots in the Bafana side in the near future.

Even more worryingly, one of the over-age players selected by Notoane to lead the young side was Ronwen Williams.

The 29-year-old is Bafana’s number one goalkeeper at the moment, and his presence and experience were supposed to ease whatever global stage jitters might have gripped his less experienced teammates.

It backfired, with lack of communication and organisation at the back costing the South Africans on numerous occasions. Williams was at the centre of all of that, playing all three games.

“Against France, it’s one of the things that was clear. Lack of leadership at the back, lack of communication at the back, and the midfield,” said Notoane on SABC radio.

Williams’s performances will worry Broos, especially with South African goalkeeping icon Itumeleng Khune still good enough to compete for a place in the national team, but regularly hit by injuries.

The Bafana boss is still in his native Belgium after heading home for a second Covid-19 jab. The Olympics were an opportunity for him to see who he can add to his arsenal as the qualifiers for the 2022 Fifa World Cup draw nearer.

South Africa faces Zimbabwe away and Ghana at home in its first two games of the qualifiers at the beginning of September. Ethiopia is also part of their group.

The team’s preparations for the tournament were far from smooth sailing.

The side was meant to participate in a preparation tournament in the United Arab Emirates, a mini-tournament that was supposed to include Brazil‚ South Korea and Argentina. Covid-19-related travel restrictions denied them the chance to partake in the tournament.

Safa moved swiftly to arrange two friendlies with African champions Egypt. There SA lost both friendlies, conceding five goals and scoring none. It was a foreshadowing of the defensive frailties that were so cruelly exposed in Tokyo.

Notoane’s side also suffered a huge blow from the withdrawal of five players for various medical reasons – just a few weeks before their departure to Tokyo.

The squad was then forced to quarantine and was allowed to train for just a few days before taking on Japan in the opening game.

“Preparation is very important. Not an excuse. But the fact of the matter is, if you look at the number of international friendlies we played compared to our opposition, you could see that our team lacked that cutting edge in preparation for this tournament … for various reasons. But no excuses there. We could have done better,” said Notoane.

It is unclear whether Notoane will remain at the helm in future. He has been in charge since 2019. More importantly for the South African football faithful, his graduates don’t inspire hope for a successful Bafana in the near future. DM168