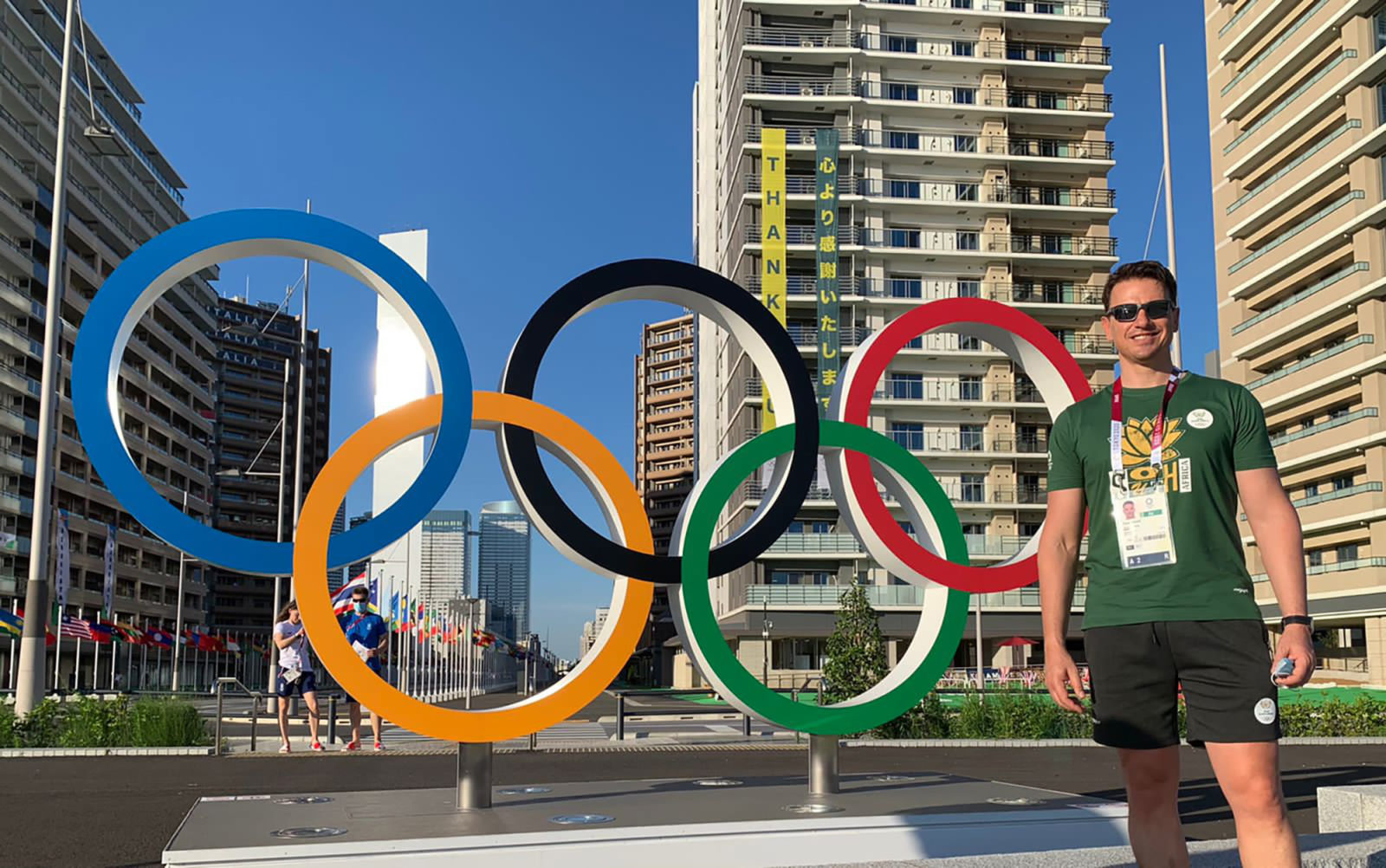 With the mental health of Olympians increasingly coming into focus, it’s good to know that Team SA has finally got a psychologist in its corner. But Professor Pieter Kruger’s efforts may only mature at the Paris Olympics in 2024.

Sticking to the age-old professional code, we won’t reveal any identities. So, the Team SA member who said “Have you seen the Prof? He’s h-o-t. And he’s such a good listener!” will forever remain anonymous.

This is new territory for South Africa’s Olympians. No, not that there’s an easy-on-the-eye member in the squad, but that there’s a psychologist in the camp. Other countries have had that kind of professional help for many years, so although it’s an overdue and welcome appointment, it’s a huge step forward for Team SA.

“I have been really busy at [the Tokyo] Games, but it has been so enjoyable and hopefully my input is proving beneficial,” says Professor Pieter Kruger, who is one of the leading professionals in his field. That this former pro-am cyclist is working for Team SA at the 2020 Games is a huge coup for the country.

He is a director of a few companies, including Cognacity, whose offices are in London’s Harley Street, the global home of private healthcare services excellence.

Kruger’s CV is as long as his suntanned arms. Being a son of the South African soil, there is a strong “Saffa list of clients” that includes rugby’s Sharks, Lions, the Springboks, Blitzboks and Proteas netball. His international clients have included club rugby franchises Harlequins, Munster and Brum­bies, F1’s McLaren, UK Athletics, Great Britain Rowing and Chelsea Football Club.

Mention of the latter especially piqued my interest. I have supported the club since before Kruger was born.

“I worked particularly with a player who was short of confidence during the latter parts of the Champions League and he played a great game in the final,” he said.

I immediately shot a name back at him. There was no reply, nothing given away. He was wearing his mask but his eyes didn’t shift, not a blink. Client confidentiality – putting the pro into the professor.

He has an unusual accent, “a hybrid”, he corrects, as if it has been brought up in conversation a thousand times before. Part-South African, part-English.

“I have lived and worked in London for the past 16 years,” he explains.

So, how did he get to the point that he became part of Team SA at Tokyo 2020?

“You want the short version or the long version?” he asks. He speaks fast – stats, facts and opinion rolling off his tongue with ease and confidence.

“I have always been fascinated by sport, having played provincial rugby at school and cycling semi-professionally,” he says. “I loved playing sport and loved being involved, but with my skill level it was never going to be a full-time success. So, to stay in sport, I studied psychology.

“However, in South Africa you can’t do a sports psychology degree so I took the clinical route – psychology honours then sports science honours and then two years clinical psychology, followed by a PhD in performance psychology.

“My wife, Suzanne, who is a GP, suggested we go overseas like so many other South Africans have done to broaden their horizons.

“There I met my colleague and we started our own practice in London called Cognacity as a three-man band. We now have five directors and about 60 staff members and associates. We look after a large number of elite UK sports organisations.

“We incorporate UK Athletics, the PGA [Professional Golfers’ Association], the LTA [Lawn Tennis Association], four football clubs, premiership rugby, county cricket. We have a foot in the clinical management side of sport in the UK, combined with a bit of the performance side, plus a lot of corporate work and other clinical stuff as well.

“In fact, lockdown was the first time in a calendar month since 2006 that I didn’t spend time in the UK.”

How did the placement with the South African Sports Confederation and Olympic Committee (Sascoc), to work with Team SA at Tokyo 2020, come about?

“We were approached via the Centre for Health and Human Performance at North West University and they asked if there were services we could offer to Sascoc because the team that I run has a division for biokinetics – one for sports science and one for psychology – so it’s a sort of one-stop shop,” Kruger says.

“They opened up a role for Team SA to all psychologists in the sports fraternity. I’m a clinical psychologist by trade but specialise on the sports side of things, so I put my name in the hat and they decided that the blend of skills I bring could (hopefully) add value.”

The importance of a psychologist in an Olympic environment cannot be overstated. Kruger uses Team Great Britain (Team GBR) as an example.

“Team GBR won 19 gold medals at the 2008 Beijing Olympics. They then invested heavily in the mental side of things for the next four-year cycle. They went from a handful of psychologists to increasing it almost to every sport, working with Team GBR heading into the 2012 London Olympics.

“It’s not the be-all and end-all, but even if it’s a five-percenter at this level, it makes a difference.”

Of course, one needs to have the fundamentals to begin with. It has often been said that, at the elite level of sport, the most important measurement is the one inch above the eyebrows, but Kruger knows that without the fundamentals the mental side of things is rendered meaningless.

“I’ve been around for long enough to know that the key building blocks will always be: physical, technical, tactical and nutrition. If you haven’t got those things going for you, nothing is going to happen.

“But psychology becomes the glue in keeping things together. You can stack the most beautiful bricks but, if they’re not cemented, they will come tumbling down once the first bit of pressure is on.”

The recent example of tennis star Naomi Osaka withdrawing from the French Open and Wimbledon has shone the spotlight on mental health issues that affect even the biggest sports names in the world. US gymnast Simone Biles withdrew from the team competition at Tokyo to concentrate on her mental health. What’s his take on this?

“In athletes, it varies from 12.5 to 43%. Top athletes are as human as everyone else. You can’t just focus on the performance side of an athlete and not on the human side.

“It’s a fine balancing act. Not having mental health challenges won’t make you any better, but having a few challenges will make you worse.”

No individual clients have been named in this interview, so I’m going to try again. We know about Harlequins, the Lions, Chelsea, Team GBR and others, so I decide to throw in a late verbal bouncer.

“Have you ever been starstruck, and if so who by?”

I’m effortlessly dispatched over the ropes. “No,” says Kruger. Celebrity “has never been a fascination.

“I have been so exposed to it, especially through my London practice. I’ve dealt with Hollywood actors, well-known singers, sportspeople… Behind everyone’s social media shell and profile, they’re all human.

“When they start talking, they have the same brain and the same physiological aspects. The same neurological process is involved. I look at the processes and try to get the job done.”

That said, his job with Team SA has only just started. Whatever the involvement of Professor Kruger in Tokyo, or any other sports psychologist after these Games, the real results will only present themselves at Paris 2024. DM168