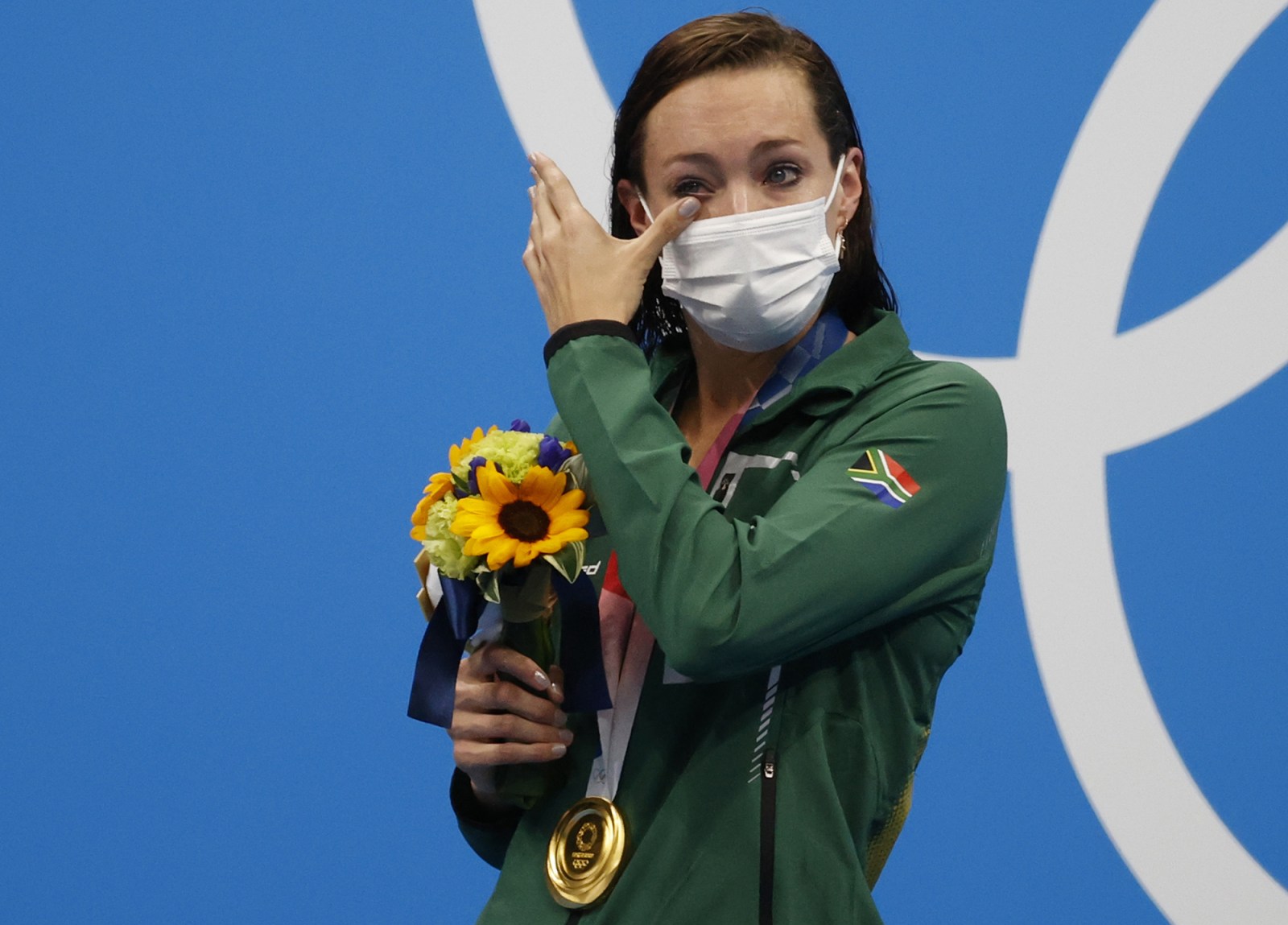 South Africa’s Tatjana Schoenmaker has swum her way into the record books at the Olympics, breaking Olympic and world records for breaststroke, and bagging her country’s first gold medal.

Swimming sensation Tatjana Schoenmaker earned SA’s first gold medal at the Tokyo Olympics by storming to a world record time in the 200m breaststroke on 30 July.

Schoenmaker, who won silver in the 100m breaststroke on 27 July, was competing in her eighth race in five days and delivered the near-perfect performance under supreme pressure.

Her world record time of 2:18.95 left her nearly a second ahead of Americans Lilly King and Annie Lazor, who took the silver and bronze medals. Team SA teammate Kaylene Corbett finished fifth in the final.

Schoenmaker has quickly become the darling of the Olympic village because of her genuine delight and surprise at her performances.

She was already close to tears after it hit her that she had won the final, seconds after touching the wall, and her reaction when she realised it was a world record was priceless. She let out a spontaneous shriek of delight, which even gave rival Lazor a reason to smile, and she came over to hug the emotional South African.

“It still hasn’t really sunk in! I’m excited to also go back home and celebrate this with my family. I don’t wish my Olympic dream over, but I am really excited to just go and celebrate, even being at the Olympics, with my parents,” said Schoenmaker after the race.

She had come to Tokyo as the number-one-ranked swimmer in the event and the gold medal favourite. Having shown her form with a silver in the 100m after setting an Olympic record of 1:04.82 in the heats, Schoenmaker continued to play down her 200m gold achievement.

“I would’ve never even thought… This is my first Olympics, so for me to get a lane into the final – then everyone stands a chance. I’ve exceeded – or God has exceeded all my expectations, so I couldn’t have been happier.”

Like all Olympians, what we see when they’re competing is only a fraction of the time and effort that goes into fulfilling potential and competing at such a high level. While most of South Africa was in lockdown, Schoenmaker and her training partners, including Corbett, suffered in freezing air temperatures at the University of Pretoria’s (Tuks’s) outdoor pool through winter to be ready for Tokyo.

Under the stern guidance of renowned coach Rocco Meiring, Schoenmaker built her fitness and mental strength and honed her technique in tough conditions. The pool is heated, but with bitter early morning air temperatures, just getting into a pool took some courage.

“My training has been consistent. On Mondays, Wednesdays and Fridays I’d have double swim sessions in the morning and afternoon, and each lasts for up to two hours,” Schoenmaker told DM168 before heading to Tokyo.

“On a routine day I get 5km to 6km in per session in the pool and in hard training blocks, it’s about 7km to 7.5km per session.

“Tuesdays and Thursdays [are] usually only one session in the afternoon after gym sessions in the morning. And on Saturdays I’ll have a morning session in the pool and then the rest of the weekend off. I quite like Sundays.

“Within those pool sessions there is technical training… So three sessions a week will be race pace training, where I will just focus on breaststroke technique and speed.

“The other sessions are low-pulse, solid aerobic training, usually freestyle… But we are always mixing it up, and even in a breaststroke session it won’t be more than 80% of the set. My knees simply wouldn’t make it if I only did breaststroke in training.”

Being fast and fit is not enough, and Schoenmaker focused on technical aspects such as the turn and underwater speed at the beginning of each lap. Those 10m to 15m that swimmers spend under the choppy surface in a race can be decisive.

“The underwater turn is crucial and that was one of my weakest points. They have improved,” she said.

“Honestly, in training you get a little lazy about turns because you’re getting tired and you’re also not competing. You tend to take an extra-big breath and turn slowly because it’s not a race. So, you have to change that mindset. But I focused a lot more on that aspect because the data shows how much a good turn can influence a race and how much it improves your times.

“A turn is anywhere between half a second and a second on the wall (from touching with hands and then feet), which means you could lose nearly two seconds over three turns in a 200m race if you’re not doing it properly.”

Although Schoenmaker showed swimming talent, it wasn’t obvious that she would become an Olympic champion and world record-holder until her late teens.

It was only after her training with Meiring started that she began to blossom as a serial winner locally, but it wasn’t always easy.

“I wasn’t immediately a good swimmer. In junior galas everyone got a ribbon for finishing and I recall standing next to the podium many times as other girls got certificates,” Schoenmaker said.

“It wasn’t until I met Rocco when I came to Tuks at the age of 14, [and] I went from three training sessions a week to 14, that I started seeing the results of the hard work.

“It was very hard and there were so many times I wanted to get out of the pool and call my dad to come and take me home. I didn’t have all the pieces together. I wanted to sit on the couch and eat chips and drink coke like other teenagers.

“I still love having junk food every now and again. For the amount of training I do, I wouldn’t cope if I wasn’t allowed some cheat meals occasionally.”

The one-year postponement of the Olympics was always going to hurt some athletes and benefit others. Luckily for Schoenmaker, she fell into the latter camp.

“In early 2020 I realised that the Olympics were only six months away and I suddenly became quite anxious. I thought, ‘This moment has come too quickly for me,’” she said.

“In 2016, I thought that four years more seemed so long and then it was suddenly upon me and I became nervous. It was freaking me out and I thought that I needed one more year to get used to the idea of going to the Olympics.

“And then it happened, not in the way we would’ve liked, but the nervousness gave way to excitement because I felt more mentally and emotionally prepared for the Olympics in 2021.”