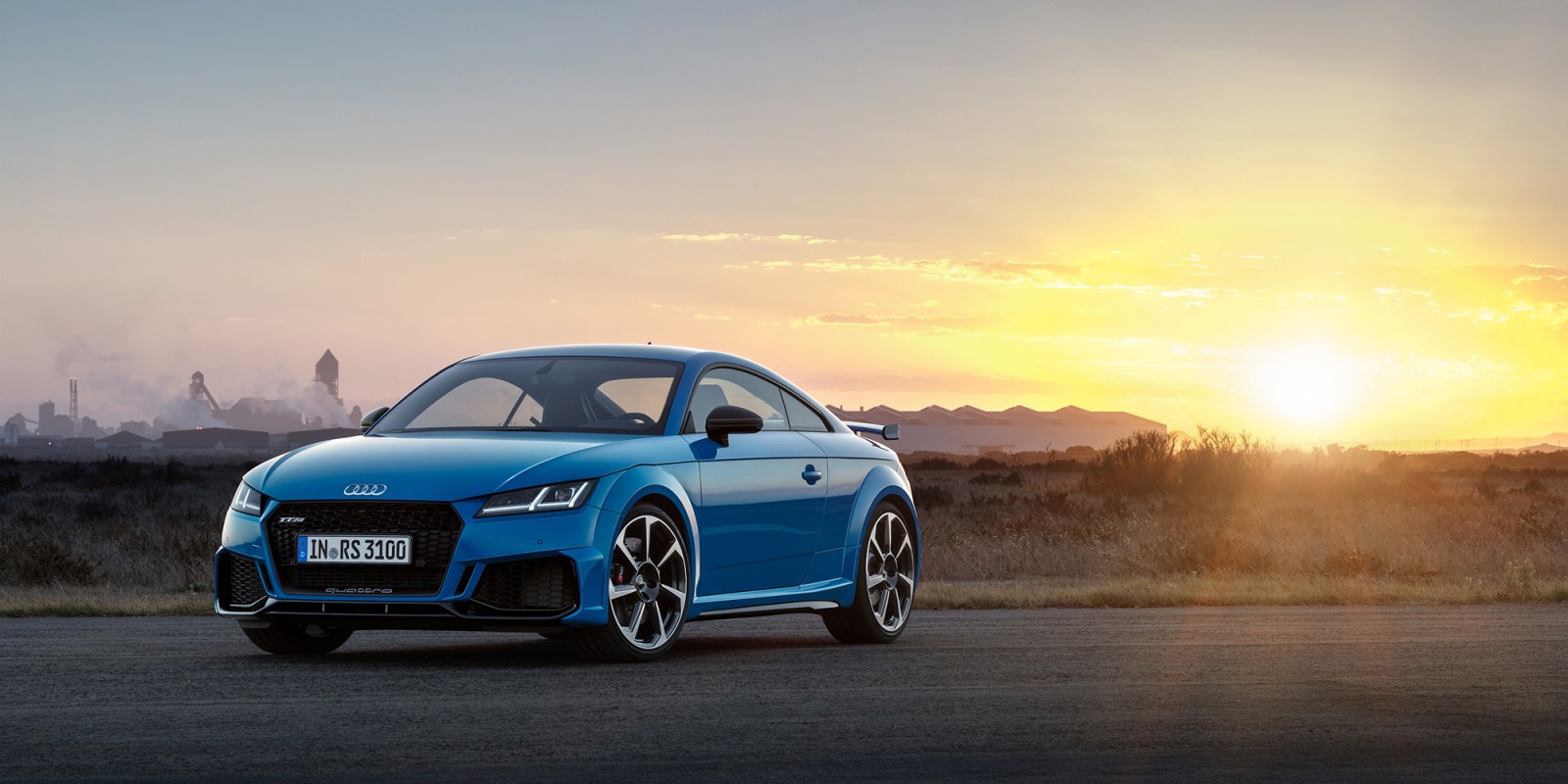 With figures that make the likes of the BMW M2, the Ford Mustang Mach1 and Porsche Cayman 718 blush, the Audi TT RS revs into pole position.

Since its first jaw-dropping appearance as a concept car at the Frankfurt Motor Show in 1995, the Audi TT has been making noise — a lot of it. When it was first unveiled, nothing quite like it had ever been seen. From concept, the TT made it to production with hardly any changes — although it would only make its commercial debut three years later in September 1998, first as a coupé, and then as a roadster, in August 1999.

Named after the annual British Isle of Man TT (Tourist Trophy) motorbike race, the Audi TT design team claimed they’d been inspired by music, art and fashion as well as pre-WW1 racing cars with their retro bubble shapes. The TT’s smooth, energetic lines came courtesy of post-war sedans of Auto Union. Interestingly, the interior design was heavily influenced by the sport of baseball, with the seats being shaped along the lines of a baseball glove.

According to one of its visual creators, German wunderkind, Peter Schreyer, not everybody was enamoured.

“When we showed the original concept, there were positive and negative reactions; a lot of people compared it to this strange German car from the 1920s, the Hanomag Kommissbrot, which looked the same at both ends. Not everybody liked it.”

Along with a mixed reception to its looks, the first-generation TT was not without its controversies after a number of high-speed crashes forced a recall. To sort out the issues that appeared to kick in when making sharp turns and abrupt lane changes, a rear spoiler and Audi’s Electronic Stability Programme was added. By 2000/2001 the TT was back on track, receiving glowing reviews. Car Design News called it “the most influential automotive design in recent times”.

Although it was a team effort, the man most singled out for the TT’s unique design has been Schreyer. As a student, he worked as an intern for Audi in 1978. After receiving an Audi scholarship to study transportation design at London’s Royal College of Art, Schreyer spent the next decade working full time at the German manufacturer’s design department, before moving to Audi’s design studio in California in 1991, where the seeds of the revolutionary TT were being sprouted.

In an interview with Car and Driver in 2017, when asked why he had made a beeline for Audi, a conservative choice back then in the late 1970s, Schreyer said, “They were the ones offering an internship! When I started, it was almost embarrassing among designers to be at Audi; it was much more prestigious to be at Ford, even. But when I began they showed me a model of the Quattro, and it was going to have over 200 horsepower and all-wheel drive, which was unbelievable back then.”

Regarded as a maverick — “I like things that are not average, and people who follow their own vision” — Schreyer is known for his predilection for all-black clothing and black eyeglasses, designed by French industrial architect and designer, Philippe Starck.

“You don’t want to be too colourful or distracting in front of the object you are showing,” Schreyer told Car and Driver in 2017. “But it’s also practical because I travel so much, I don’t need to think, ‘What does the blue shirt go with?’”

In 2006, the same year as the second-generation TT was launched, the German motoring industry lost Schreyer to the South Korean brand, Kia when he became their Chief Design Officer, overseeing a revolution in Kia’s once bland exterior design. (He is currently President of Design Management at the Hyundai Motor Group, and still owns an original Audi TT.)

The 2006 more “grown-up” second-gen TT increased by five inches in length and three in width but what really caused a stir was its bodywork, fashioned from a combo of steel and aluminium, enabling a 50-50 weight distribution between front and rear. Two new turbocharged engines — a 1.8-litre and 2.0-litre — were introduced to join the first generation VR6 engine, while a diesel option became available in Europe. In 2009, the new 2.5-litre-five turbocharged TT RS roared onto the scene, racing from 0-100kms in just 4.7 seconds.

The larger, sportier third-generation TT launched in 2014 with its 2.0-litre turbocharged four-cylinder engine. Much to the dismay of TT fans, it’s been widely reported as being the last and final fuel-driven TT to be produced by Audi — there are however plans in the works to make the icon electric.

A few weeks ago I got to test drive the up-switched TT RS Coupé for a couple of days. I had just savoured the crème of the speed crème, the Audi RS R8 V10 Spyder, so I was expecting to be in for a more sedate few days. Boy was I wrong.

So you might be thinking that not everything’s just about speed. So let’s talk about sound. I will be bold here and say the TT RS roars better than anything in its class with its active exhaust system. Push the Loud Noise button and you get a thunderous cracking-popping-growling symphony of addictive sound on the rev.

And if it’s not all about speed and sound, the overall drive of the TT RS seals the deal. With power going to all four wheels via a 7-speed S-Tronic gearbox and Quattro system, the traction is sublime. Steering is razor-sharp and instantly responsive. The TT’s laudable when taking corners and well-planted with the aid of its RS Sport suspension system with adaptive dampers, although (as is so often the case with Audi), you’ll be paying an extra R15k for that add on.

The cabin is a masterful ode to minimalism with drive systems available via the steering wheel, borrowed from the R8 by way of the spoke-mounted ignition and Drive Select toggles.

And if you’re expecting the usual Audi infotainment screen mounted in the centre, you won’t find it. The reverse camera screen is on the electronic info panel behind the steering wheel and because the TT RS is a driver-focused machine, everything can be accessed via the buttons on the multifunction steering wheel. You can easily flick through settings and vehicle info without taking your hands off the wheel and once you get used to it, it makes total sense.

There’s a surprising amount of 305 litres of boot space making this a somewhat practical everyday car if you want to do more than just spend adrenaline-spiked days on the track.

If I had to groan about anything — it’s impossible to keep the fuel figures at Audi’s claimed 8.9l/100kms — mine came closer to 13. But then I did spend three days driving it like I stole it, hence restraint might be the biggest challenge when owning this little spitfire.

There are supercars out there costing three times the price, but when it comes to speed, sound, drive and extraordinary value, there is nothing like the Audi TT RS.