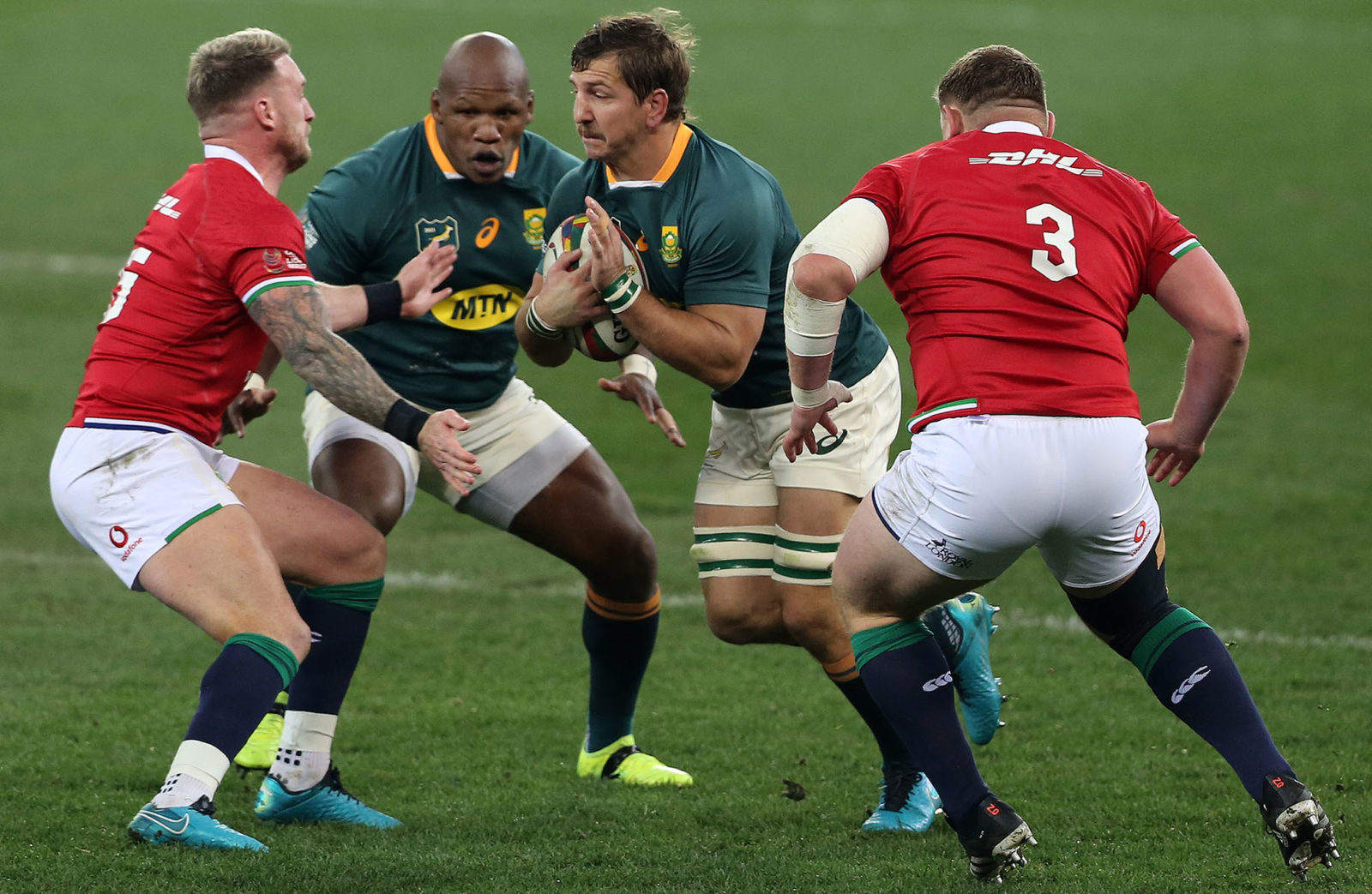 Kwagga Smith of the Springboks running with the ball during the Castle Lager Lions Series 1st Test match between South Africa and the British & Irish Lions at Cape Town Stadium on 24 July 2021 in Cape Town. (Photo: EJ Langner / Gallo Images)

In 2009, the last time the Boks and British & Irish Lions played the second of three Tests, six players ended up in hospital as South Africa won a thriller with the last kick of the match. The stakes are as high again.

The second Test of any three-match series is not for the faint-hearted because the stakes are always stratospheric. One team is on the brink of failure and another on the brink of glory and therefore the tension and pressure are ramped up.

But a Test series involving the Lions is even more fraught because it only happens every four years for Lions players and 12 years for the Springboks. This is a once-in-a-career opportunity for most players and the baggage of losing a Lions series is a burden players have to carry forever.

And that’s without what can only be described as a spiteful build-up. This week’s assault came from Rassie Erasmus, who dissected the performance of the match officials in the first Test with calculated precision in a 62-minute video.

It has had the intended consequences. The rugby world has been split into those crying sour grapes and those applauding that someone active in the game, with the ability to shape its future, has had the courage to take on the establishment.

Erasmus’s plan though is far more prosaic and selfish. Erasmus’s expose of the myriad mistakes in the first Test has piled pressure on match officials for the second with the aim of giving the Boks a fair shake in the match, which they feel they didn’t get in the first. New Zealand referee Ben O’Keeffe will feel like the loneliest man in the world at times on Saturday.

The Boks know that they will have to be better than last week when they went down 22-17. They will also know that Erasmus highlighted 26 incidents that went against the Boks — many of them penalisable offences.

That will sting and add to a sense of injustice, which is probably the directors of rugby’s intention. But it will also serve to make Bok players a little more angry and desperate.

They will have to straddle a fine line between playing within the laws of the game with legal brutality and stepping beyond the limits of what’s acceptable on the field of play. Erasmus’ video detailed several incidents of the Lions going over those limits without sanction last week, but it won’t pay the Boks to think they will get away with the same indiscretions this week, simply because Saturday’s referee Ben O’Keeffe is more likely to be stricter in every sphere of the game.

“We are not going to do much differently. We are going to play rugby like we did last week, just hopefully better and control the things we can control,” Bok skipper Siya Kolisi said.

One of the major issues Erasmus’s unprecedented video highlighted was the way referee Nic Berry was dismissive of Kolisi when he queried decisions. Erasmus accused officials of lacking respect for the World Cup-winning skipper.

Instead of reducing the simmering tension, Kolisi turned the heat up a notch in his pre-match media briefing. “Yes, I did feel disrespected last week,” Kolisi said.

How O’Keeffe’s interactions with Kolisi play out will be one of the subplots of the match. Last week Lions captain Alun Wyn Jones gave a master-class in referee relations and certainly ensured his team were on the more tender side of referee Berry.

Who has a better bench?

Tactically the match promises to be fascinating. Last week the Lions only kicked the ball out four times, meaning the Boks only had four lineouts on their own throw. That neutralised a great Bok weapon — the rolling maul.

How the Boks fashion more chances for that aspect of their game could be a key battleground.

Lions coach Warren Gatland has reverted to scrumhalf Conor Murray to start after his side trailed 3-12 at halftime last week, which is an indication he wants more control from early on. Murray’s pinpoint tactical kicking game could give the Lions more territory in the early exchanges, which can often translate to penalties in good areas.

They might have fought back last week from a nine-point deficit, but Gatland has been around long enough to know that it’s unlikely to happen two weeks running against a quality team such as the Boks. It’s vital for both sides that no more than one score separates them at the break.

Bok coach Jacques Nienaber was forced to replace loosehead Ox Nche who has a neck injury sustained a scrum the Boks maintain was illegal when Lions flank Tom Curry scrummed into him.

Steven Kitshoff replaces Nche and will earn a 50th Test cap while Frans Malherbe starts at tighthead where he will hope to find the form that made him the most destructive scrumming force in 2019.

Jasper Wiese earns a first start at No 8 with Kwagga Smith dropping to the bench. The bigger, more physical Wiese is more of a like-for-like replacement for the injured Duane Vermeulen. The Boks need some extra grunt and he might provide it.

Perhaps the key to the match though will be the performances of the respective benches. The Lions were better in this area last week and finished the match stronger.

With players from four Test sides to choose from, the Lions’ bench is always going to be stacked with talent, experience and class.

The Boks have opted for two fetchers in Marco van Staden and Smith on the bench and a return to a 6/2 split between forwards and backs. The Lions maintained their 5/3 split but brought in heavyweight loose forward Taulupe Faletau on the bench in place of the fiery Hamish Watson.

“We have had an extra week on the training field after a few disruptive weeks in the buildup to the opening Test, so we are confident that the players in the squad will be able to deliver on the physicality and grit that will be required in this match,” Nienaber said.

“We need to be better in every area of the game this week, and the set pieces will be crucial in laying the foundations we need to execute our game plan effectively.

“We also spoke about our discipline and the aerial battle as a team, and we intend to work as hard as possible at training this week to correct the errors that cost us last week.

“We were disappointed ourselves last week, and we all know how important it is to bounce back with a strong performance and show our fighting spirit and pride as a team and nation.

“For most players, this series is a once-in-a-lifetime opportunity, and we desperately want to win the series, so we will fight as hard as we can on the field to win this week so that we can achieve that goal.”