Gauteng police’s poor response to looting blamed on i... 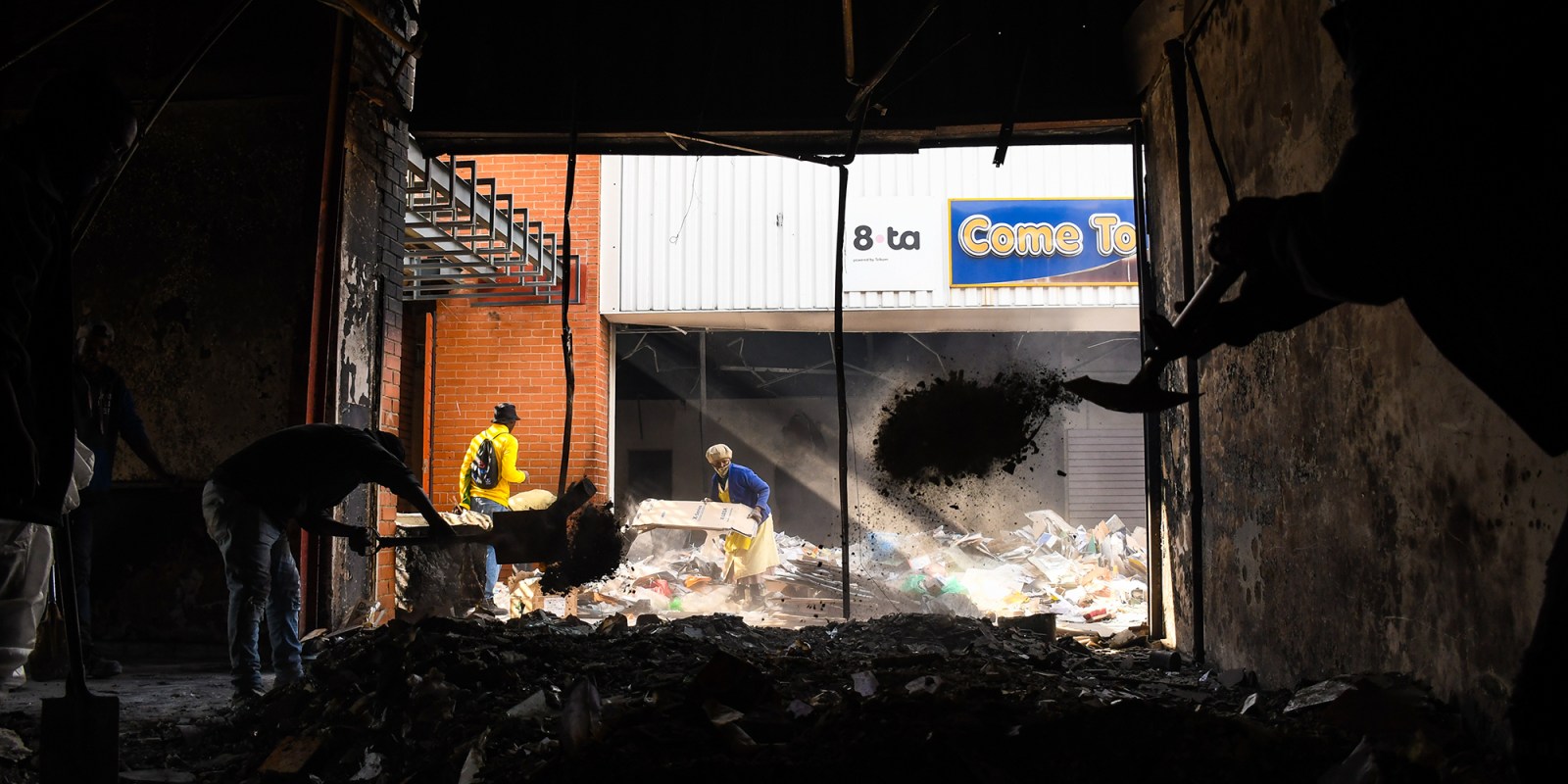 Employees from neighbouring stores clear the debris and rubble after it was looted in Katlehong, Gauteng during unrest and public violence. (Photo: Julia Evans)

They weren’t prepared, but Gauteng police were certainly aware of what was approaching them.

In Sebokeng on Thursday, the Gauteng Provincial Legislature’s Portfolio Committee on Community Safety invited law enforcement to account for their role in responding to the recent looting, violence and destruction of property that escalated from Kwa-Zulu Natal to Gauteng.

The committee said, “The portfolio committee has noted with regret the dithering and slow response by police which made it possible for the unrest to prolong, causing more damage to the economy and job losses; this at a time when the country is on a path to recover from the harrowing effects of Covid-19.”

Mazibuko says Gauteng was ready for the unrest

What was made clear is that the South African Police Service (SAPS) didn’t have the numbers or the resources to deal with the unrest.

They weren’t prepared, but Gauteng police were certainly aware of what was approaching them.

Gauteng Community Safety MEC Faith Mazibuko told the committee: “As Gauteng, I must indicate, Chairperson, we were ready.”

Mazibuko said they received intelligence in the form of audio clips, videos and posters from community members alerting them that what was happening in KZN was moving along the N3 toward Gauteng.

“Friday night we [the public] slept whilst everyone was gathering this information and crime intelligence [was] working flat-out in further detecting where else are these messages coming from and who else is sending these messages,” said Mazibuko.

“When we first picked up that there are these things being planned and targeted now coming to Gauteng, police were able to convene urgently through the crime intelligence and through the state security agencies.”

Brigadier David Bender, Gauteng provincial head of organisational development, confirmed that an operational planning meeting with law enforcement agencies was held on Sunday, 11 July to address the threat of loss of life, looting of businesses, damage to property and blocking of routes. From there a joint integrated operational plan was compiled and implemented.

On Monday, 12 July, a provincial joint operational committee was established to ensure effective coordination, command and

.Bender said that 2,926 SAPS officers were deployed in Gauteng and that in total there were 4,747 officers after the South African National Defence Force (499) and metro and traffic police (1,322) were asked to assist.

“And as a result, police had to quickly put together systems and put together resources,” said Mazibuko, adding that 300 police officers from Gauteng had been sent to KZN to assist with the unrest there.

Bender said, “For the majority, the current situation has returned to relative calmness, with all main routes open and clear. Clean-up operations are in process at affected malls and sites.”

“As Gauteng we were not caught napping,” said Mazibuko, “and so people, what is good is that we’ve got a community in Gauteng that also shares information. Even members of the opposition were also sharing that information… telling us what is being planned.

“And then we’ll elevate it to crime intelligence, elevate it to state security… and then decentralise the information to the district commissioners to make them aware. So that way… they are able to tackle some of those challenges.”

Why some police didn’t act

Mazibuko made it clear that the police weren’t unresponsive, but often the  Joburg Metro Police Department (JMPD) were the first responders and couldn’t react because they only had live ammunition and didn’t have resources to address crowd control.

With other police officers addressing hotspots around the country, the SAPS had to activate other resources like the JMPD to help in the escalating unrest around the province.

Mazibuko said that the police also engaged with CPS and Business Against Crime, asking them to monitor situations where they’d been informed there was unrest.

“This is almost 4am. We are sitting in Thokoza, together with the two top leadership of SAPS now checking on the resources that are available for the police now that it is becoming eminent that we have to deal with crowd control.

“I must congratulate them, Chair,” said Mazibuko, addressing Alphina Ndlovana, chairperson of the committee, “as much as they were thin on the ground – we did not have enough officers – they were running wherever they’re able to run.”

Not only weren’t there enough police officers, but not all officers are equipped to deal with crowd control.

“Not any police officer can go deal with crowd control; there are those that have been trained specifically,” explained Mazibuko.

“And remember police carry live ammunition. They can’t go into Sebokeng Plaza and take out their guns and start shooting. It means they also have to await these ones who deal with crowd control because of the type of resources they are carrying. Like your stun grenades. They are carrying tear gas, and they are also carrying rubber bullets. So they are the ones that deal with crowd control. So the ordinary station police only carry 9mm guns and you can’t use that because it is live ammunition that can actually injure or hurt people.”

How the SAPS plans to respond in future

From the lessons learnt during their response to and evaluation of the unrest, the SAPS developed a five-pillar approach for similar incidents and threats in the future:

With this five-pillar approach, the acting provincial commissioner for Gauteng, Major-General Tommy Mthombeni feels they are better equipped to deal with this sort of situation in the future.

However, committee member Michael Shackleton (DA) voiced the fears of many South Africans when he said, “People are scared as to whether the violent unrest and all the looting could spring up again, and even become something worse.

“I think that this situation now, where people are scared that violent unrest is going to spring up again, and people are saying that it’s the worst violence since our democracy began in 1994, I think this presents a perfect opportunity to increase police resources.”

Mazibuko said there was a lack of recruitment due to police colleges being closed because of Covid-19 and officers retiring at 60 and not being replaced quickly enough.

“We have 498,000 members of security companies in this country. And we have about 160,000 active SAPS offices in the whole country. And there’s a clause in the Criminal Procedure Act where an officer can command a person to assist in an arrest. [The police] don’t have enough resources, but they have the means to use CPS, to use civilians that own firearms privately, as an auxiliary force for free.”

Another committee member, Kobus Hoffman (Freedom Front Plus) agreed that we should utilise private security.  However, Sizakele Nkosi-Malobane (ANC) was against this, saying it promotes vigilantism and gangsterism. DM