Finding the real Arniston and running fowl of a weekend... 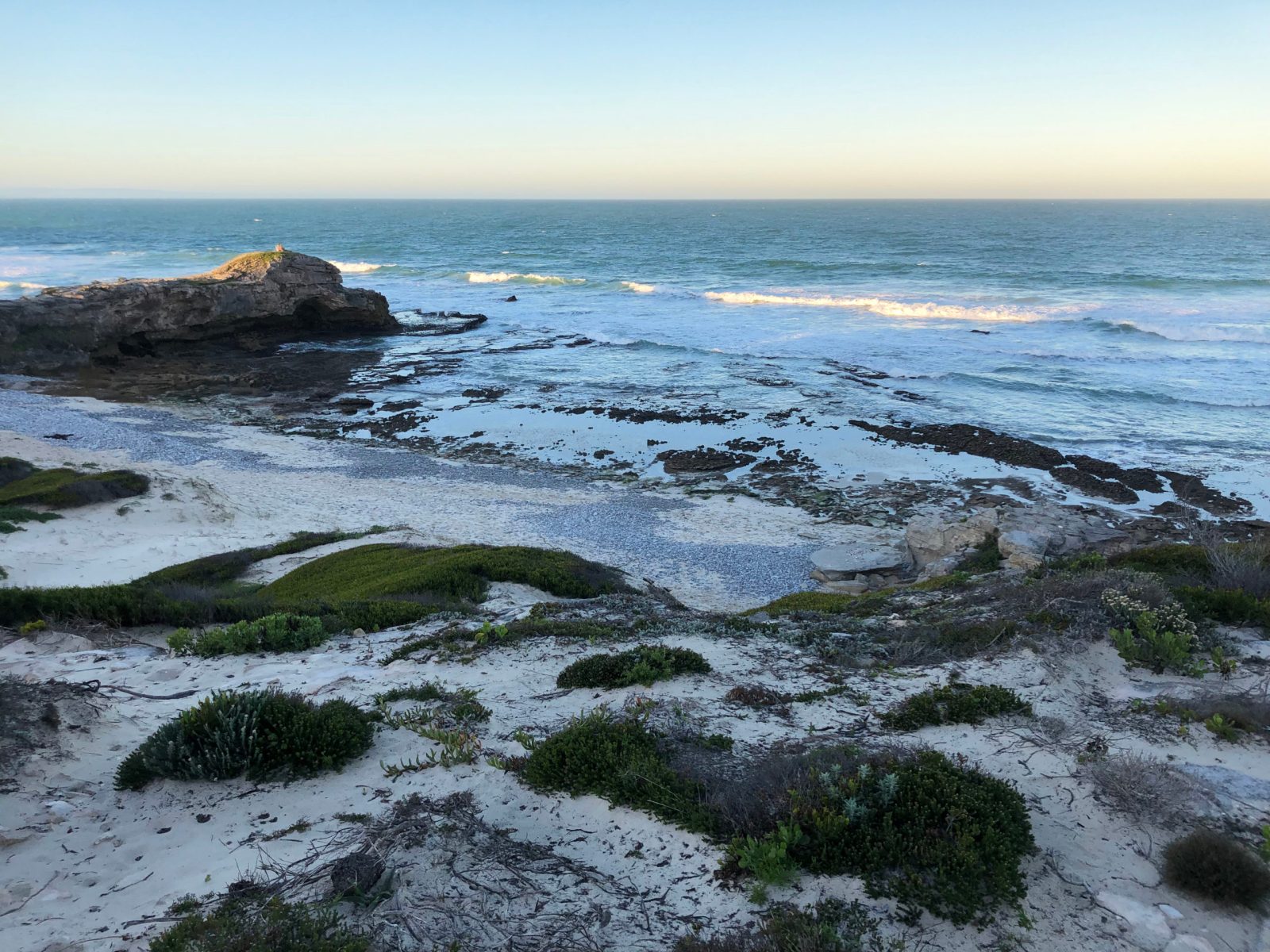 The azure sea of Arniston on the Western Cape coast. (Photo: Tony Jackman).

I have learned in a long life that spontaneity is not necessarily a trustworthy thing, not least where food is involved. I first discovered this on an impromptu visit to Arniston, but this story is not so much about a trip to the seaside as a frozen chicken.

A long time ago (I hasten to add this was when I was between marriages), I was contemplating a weekend of solitude, wine and cleaning out the Tupperware drawer.

The children’s father (that’s what you called your ex-husband back then) had our young offspring for the weekend and I was in our features department at The Cape Times enjoying a champagne Friday with my colleagues.

Champagne Fridays occurred when we had met all the deadlines, hit the targets and got all our pages off stone by lunchtime. We would get some bubbly in and toast ourselves prior to going to the press club downstairs at the Café Royal in Cape Town’s Church Street.

My phone rang, one of those large things on a desk, nobody had cell phones then. It was a male friend and he said, “Let’s go to Arniston, to the new boutique hotel, see what it’s like.”

Why the hell not? An hour later and after a quick trip to Woolies I was on the pavement in Burg Street, waiting for my travelling companion.

I didn’t tell anyone where I was going. The secrecy had nothing to do with my friend, he was just a pal. It was because I was breaking some sort of boycott, an unspoken one but the refurbished hotel was off limits to the Arniston diehards, the ones who back in the Seventies had slept on the beach at the little fishing village, saving it from destruction. There was a lot of that about in the Seventies. I believe I saved the rhino, the whale, the lesser spotted finch and at least one panda. I had stickers on my car.

I won’t go into it at length but there was a sort of “keep Arniston sacred” thing. The hotel had been a rather run-down family spot, owned by the legendary Jock Dichmont, lawyer turned fisherman who landed up at the picturesque place. It was all a little shabby, lots of rustic family cottages, not least the lovely little village of Kassiesbaai where the traditional fishermen lived.

Nicky and Steve Fitzgerald bought the hotel and gentrified it. Not on. I don’t know why it was not on. Jock still presided over the Strandloper, the hotel’s eccentric bar. I can’t explain the objection or the inverse snobbery, you had to have a Sixties mindset.

I was dying to see the hotel and luxuriate in it and my friend knew this. It was a dare. Accepted.

The drive from Cape Town to Arniston was roughly two-and-a-half hours so we got there at about 6.30pm when the light was fading. We drove up the long curved drive, still there today with its iconic anchor, and were thrown into confusion. The hotel was full.

We were crushed. We gazed out on the sun setting on the azure sea and tried to think what plan B would be.

“You could try the municipal camp,” the receptionist suggested.

The what? We both recoiled in horror. “It’s very nice,” she said bravely.

In the end there was nothing for it and we found a chalet (praise the Goddess, I have never slept in the outdoors in my life) and had to contemplate what to do about dinner. The hotel dining room was naturally also booked out.

“We’ll braai,” we exclaimed bravely and headed for the village shop, also legendary and sadly no longer there. But again we were defeated by the beautiful weekend in which half of the Overberg decided to head for their beach cottages and they had raided the shop.

My friend did manly things such as finding the wood and briquettes while I dug deep for my inner domestic goddess. No luck there. I managed to find a tin of potatoes, another of sauerkraut and yes, just one frozen chicken. A whole one.

Back at the chalet – really just an A-frame hut – we set about lighting a fire in the braai which was a rickety little thing that looked as if it had been put together from a Meccano set. There were two pots, one large and a small one.

The chicken was still rock solid so I hit on the idea of boiling it in the large pot. I put the tinned potatoes in the small pot and mixed them with mayonnaise from a small jar found at the village shop. The sauerkraut would have to be scooped from the tin.

My friend was a Welshman so fire making was not his primary skill. But in the end we achieved a blaze. About an hour later the chicken was judged to be cooked through and we decided to put it on the fire and turn it regularly. We’d seen this on the TV with whole sheep so how hard could a solitary chicken be?

As we settled the bird on the fire, alarming flames shot into the air. We only had a grid and a rusty pair of tongs to manoeuvre it with but approaching the beast was nigh on impossible. It was on fire.

Slowly other campers were noticing our antics and there was suppressed laughter in dark corners, rather like a comedy night of the zombies as they lurked and hissed in the night.

In the end the chicken just sizzled and we put a couple of forks into it and lowered it onto a plate,

Okay, there were some good bits. But hardly the gourmet meal looking out over the bay that we had expected. We had some wine and beers, the evening was warm and a walk down to the beach calmed our frazzled nerves. We gazed wistfully into the lighted hotel and decided that we had had the more authentic experience and could look our “save Arniston” friends in the eye on our return.

I have learned many things since then. Always book ahead, have supplies to hand in case of a crisis and always travel with a foodie.

I’ve also learned that you never boil chicken before a man braai. You can defrost it gently, marinade it, season it or even talk to it soothingly but never hand a braaimaster a pre-boiled chicken. I don’t know why, but it’s a thing.

Arniston/Waenhuiskrans is on the coast of the Western Cape Overberg. It is named both for the wreck that took place there in 1815 and the vast cave carved into its cliffside by the sea water.