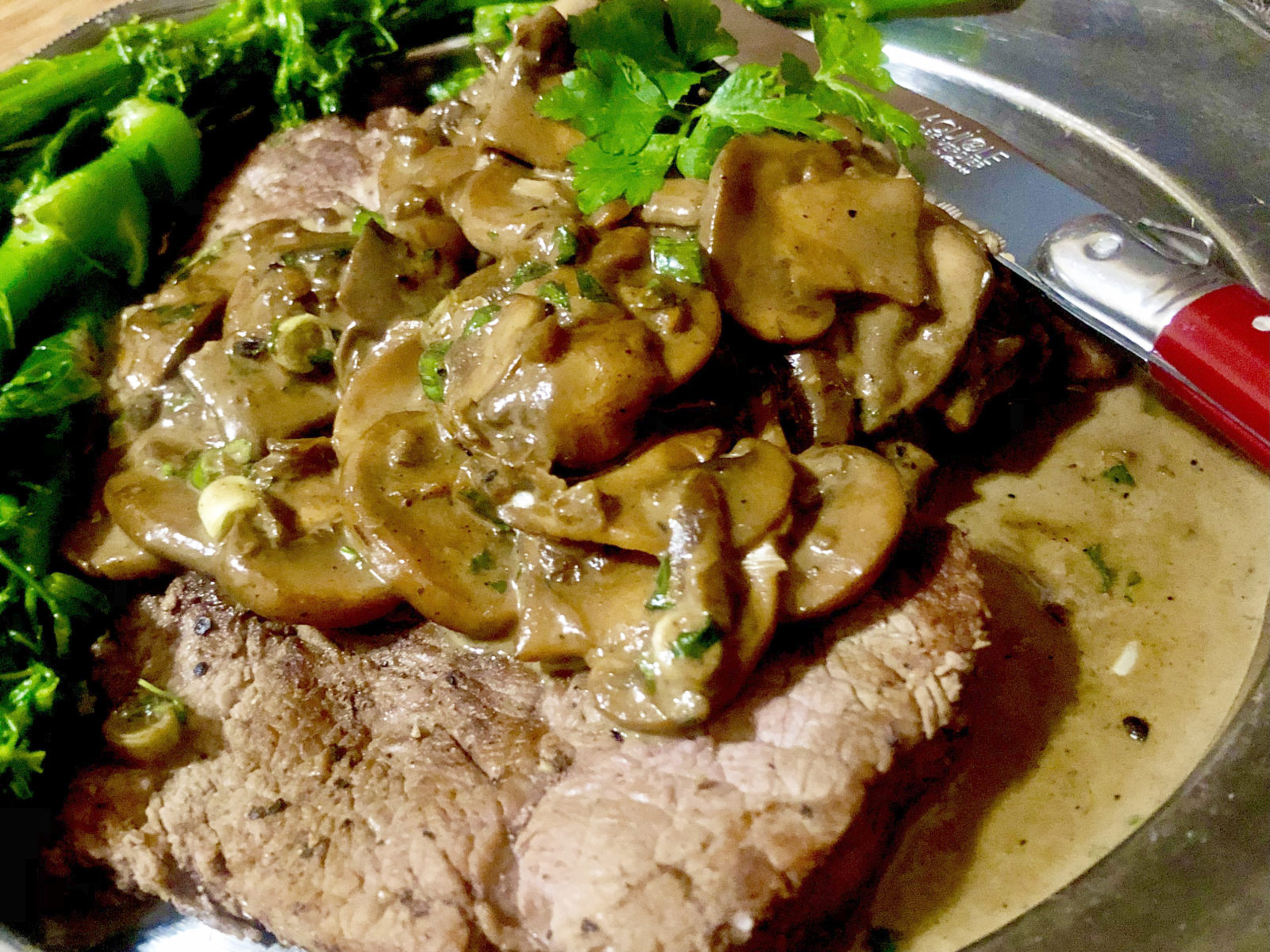 The steak is fillet and sliced thinly for quick cooking, the sauce is … well, the sauce is what it’s all about in this old-style restaurant classic. It’s utterly divine. It’s Steak Diane. And back in the day its sauce would have been set aflame at your table. Time to bring it back. Seriously.

Once upon a time, in all the posh hotel restaurants (for that was mostly where you would find them, once upon a time) and other venues where the speciality was what was then called “Continental” cuisine, there were trolleys and men (usually men) dressed very smartly in jacket and tie or even tuxedo and dicky bow, who would bring certain select dishes to the table and flambé them for you, right there, with every other eye in the vicinity turning to watch. One such dish was Crêpes Suzette, about which more in a future Throwback Thursday feature.

It’s not that you cannot find this indulgence anywhere in the world today, but to flambé at the table has become a rarity, whereas it used to be expected in every posh nosh palace. It’s just what happened. There were “dessert trolleys” too.

And there was Steak Diane.

The steak in this dish is simply fillet, usually the thinner cut of fillet known in French as filet mignon, also called beef tenderloin. Unlike most fillet steak dishes for which it would be a thick cut of say 250 g or 300 g served in one piece, for a Steak Diane it is cut into slices of barely a centimetre thick, or somethimes a little thicker but pounded. The slim steaks are cooked on a very high heat in a little oil for about three minutes on each side, though I prefer to cook for only two on the second side. They are seasoned after turning. The cooked steaks are then removed to keep warm (but not to dry out in a warmer drawer) while you cook the sauce.

This leaves you with the pan juices for the steaks and all the lovely little knobbly bits that catch at the bottom. You want those. And the sauce is where it’s at, to use the old hippie term.

The origin of Steak Diane is not entirely clear. Wikipedia and other sources say it originates “in London or New York” in the 1930s. Alternatively, it may derive from Belgium. Now, many Britons would scoff at the thought of anything worthwhile emanating from Belgium, which is grossly unfair because that country has fabulous fare and gave us no less than the world’s best moules (mussels) and the perfect frites (and yes, frites are Belgian and borrowed by the French, and we’ll get to that in a future Throwback edition too; both nations claim ownership of frites. I choose to go with Belgium on the matter.).

Wikipedia mentions a venison Steak Diane from 1914 which was sautéed and flambéd and garnished with fruit, before adding the rider “so it is unclear if there is a connection”. That dish would have been named after Diana, Goddess of the Hunt, so venison would make sense. In high-end cuisine, “Diana” would generally refer to a venison dish.

Having said that, it is thought to date to a Mayfair, London restaurant in 1938 called Tony’s Grill, where said chef Tony Clerici (who later moved to Australia) named it after one Lady Diana, Viscountess Norwich, a glamorous high society figure of the day who was part of a group of intellectuals called the Coterie, and most of whom died during World War I, according to Wikipedia.

But, having said all that, in 1988 a chef named Bartolomeo Calderoni said in an interview that he had invented the dish as one to be flambéd at the tableside in a chafing dish at Quaglino’s in London when he worked there in the 1930s. Interestingly, Bartolomeo said this only two years after Lady Diana Cooper’s death in 1986, so she for one would not have been able to confirm or deny it.

In New York City, meanwhile, Steak Diane was part of the fad for flaming dishes at the tableside in the 1940s. This paragraph from Wikipedia perhaps ties it all up:

“During the 1940s, steak Diane was a common item on the menus of restaurants popular with New York café society, perhaps as part of the fad for tableside-flambéed dishes. It was served by the restaurants at the Drake and Sherry-Netherland hotels and at The Colony, the 21 Club, and Le Pavillon. In New York, it is often attributed to Beniamino Schiavon, “Nino of the Drake”, the maître d’hôtel of the Drake Hotel. Schiavon was said to have created the dish with Luigi Quaglino, the co-founder of Quaglino’s, at the Plage Restaurant in Ostend, Belgium, and named it after a “beauty of the 1920s” or perhaps “a reigning lady of the European demimonde in the 1920s”.

However: “At the Drake, it was called ‘Steak Nino’.”

All of which is hardly definitive.

More important is what Steak Diane is and there are a number of variations on it, but having made it one evening this week I am prepared to stick my neck out and suggest how it might best be done.

First: I am not a fan of pounding meat and destroying its fibres, so I chose to cut the fillet thinly.

The general consensus is that Diane sauce should contain both Dijon mustard and Worcestershire sauce, though some would say dry mustard whereas I would emphatically say prepared Dijon. It should also contain both beef stock and cream, and butter.

Other additions range from shallots and garlic to parsley, spring onions and chives.

There’s even debate as to whether it even needs to be flambéed, but have a glance further up and you’ll see that it is clear that it should be. But never mind all the debatable traditions. I used every one of the above ingredients and on tasting it, hooboy, what a sauce. It’s so, so delicious. I could taste every element: the chives, the spring onions, the Worcestershire sauce, the garlic, the parsley, the mustard and not least the slight bit of caramelised umami that the Cognac gets during the flaming process. And the cream of course that just brings everything together luxuriously. Salt and black pepper, of course, also have a role to play in it.

But let’s not forget that the first flavour that goes into it is that of the steak itself when it is first fried so simply in a pan that is almost dry but for a thin film of olive oil. It’s that nutty deliciousness that sets up the sauce. Everything rides on top of it.

A bit of housekeeping. I would have preferred to use shallots but I have never seen one in Cradock. Use them if you can get them, otherwise use red onions as I did, as they are sweeter and milder than white onions.

Fry the steaks on a high heat for three minutes on each side (or less on the second side), then season the cooked side with salt and pepper. Remove to a side dish and cover with foil.

Add very finely chopped red onion and garlic to the pan with 2 Tbsp butter and sauté while stirring with a wooden spoon for a couple of minutes to soften them.

Add the thinly sliced mushrooms and butter and cook until browned and nutty, stirring as necessary.

Careful now: it’s time to flambé the pan with Cognac (or brandy). This means pouring the liquor over and putting a flame to the edge, while standing back. Be ready to whip the pan off the heat if it goes a bit wild and the flames lick the cupboards. This may or may not have happened in my kitchen this week. (Don’t tell The Foodie’s Wife, she was watching TV in the next room.) I’d actually used 3 Tbsp of Cognac, and this near-incident is the reason I have written 2 Tbsp here.

When the flames have subsided (and you have checked the cupboard for damage), pour in the cream and immediately stir in the mustard and Worcestershire sauce. Stir while cooking over a gentle heat until the cream sauce thickens.

Stir in the chopped parsley, spring onions and chives. Taste and adjust seasoning.

Plate the fillet slices and pour the hot Diane sauce over the top (that’s how it is traditionally served, with the meat masked by the sauce). Garnish with a little more chopped parsley if you like. I served mine with blanched tenderstem broccoli tossed in olive oil on the heat and seasoned with salt and pepper. DM/TGIFood