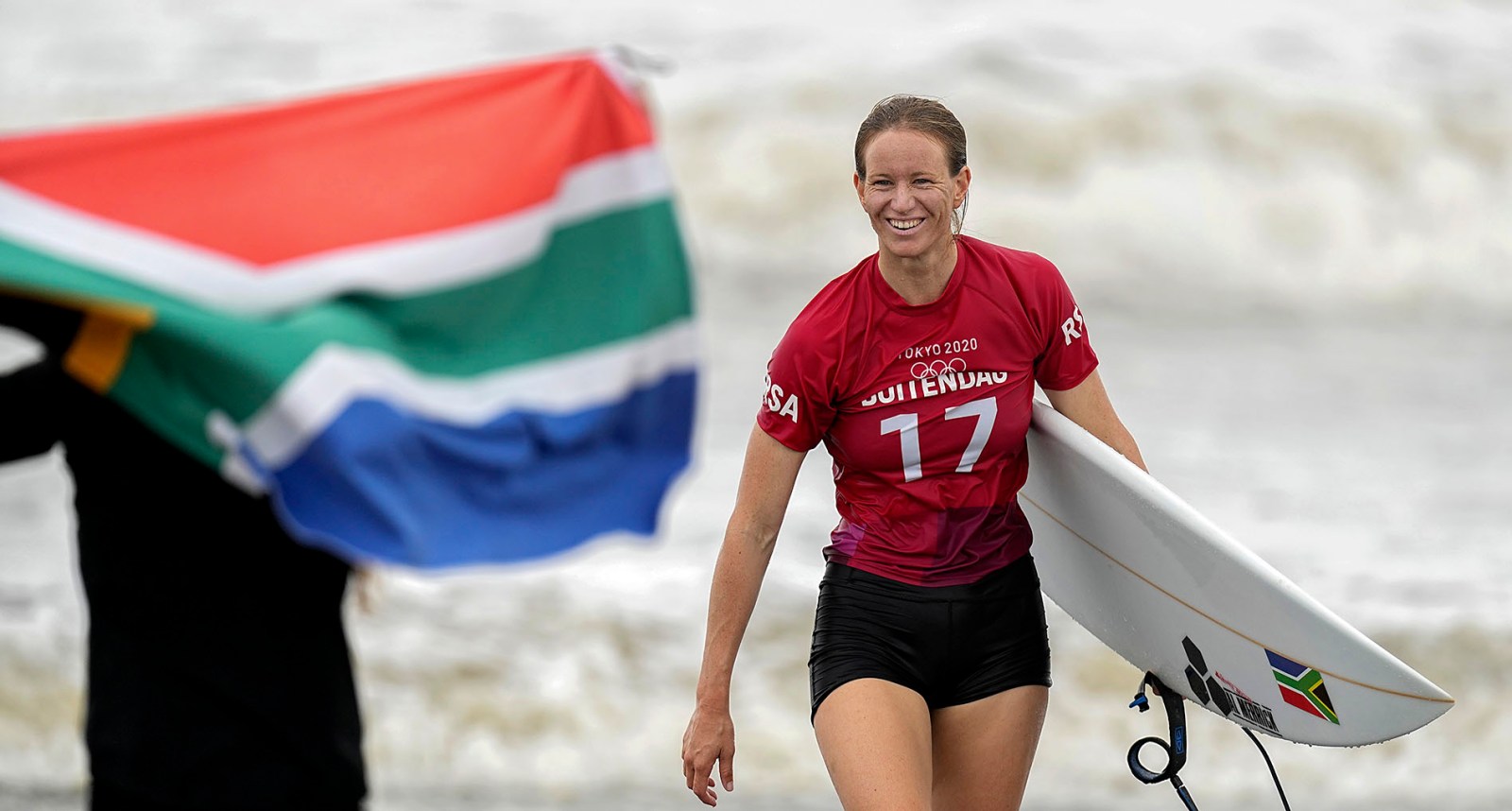 Bianca Buitendag of South Africa is greeted on the shore during the Women's Quarterfinals of the Surfing events of the Tokyo 2020 Olympic Games at the Tsurigasaki Surfing Beach in Ichinomiyai, Japan, 27 July 2021. (Photo: EPA-EFE/NIC BOTHMA)

While she celebrates her historic Olympic triumph, the 2020 Games will be Buitendag’s last professional surfing gig, as she enters a next life chapter working with orphaned and vulnerable children.

Just past 9.30pm at Tokyo’s Olympic village, professional surfer Bianca Buitendag is traipsing around her hotel, looking for a quiet place to be interviewed.

“All my roommates are asleep,” she whispers. “I’m trying to find a spot where I won’t disturb them.”

Buitendag is sharing a unit with two triathletes, a canoeist, a javelin thrower and a hurdles runner, from Team South Africa. When she returned home late on the night of her victory, on 27 July, they had arranged a small celebration.

“So I got back to the village really late last night after the press conferences and the drug testing and all of that,” she says. “Obviously with Covid regulations we’re not allowed to get out of the village. This limits our options for celebrating, but my roommates managed to organise a small party with a poster stuck up on the wall and the South African flag, which was awesome.”

Speaking to Daily Maverick on Zoom from the Olympic village’s building 15, Buitendag is leaning against a wall next to a lift. Dressed in a green tracksuit, she is smiling despite feeling like she’d been hit by a bus.

“I went to the physio this morning,” she says. “I feel like a bus drove over me, my body is so sore from all the paddling yesterday. So ja, I’ve just been taking a rest day and catching up with my family and friends back home.”

Afterwards, Buitendag told journalists that the competition happened during a typhoon, adding that the “confusing and messy conditions” worked to her advantage.

She tells Daily Maverick how she first met Moore when they were both 13, at a surfing competition in France.

“So we got acquainted during events over the years. You know, so this Olympic experience is very special. Carissa really is A-plus, even more of an inspiration to me personally than she is in the professional field,” she says.

What’s more, the 2020 summer Olympics will be Buitendag’s last professional surfing gig, as she enters a next life chapter working with orphaned and vulnerable children.

“So ja, I’ve been planning to retire for a while,” she says. “Although, I don’t like the word ‘retire’ because, I mean, it’s got bad connotations. But yes, I’ve been planning to end my competitive surfing. So when my inclusion in the Olympics was announced, I thought this was the perfect opportunity for the grand finale or the closing of my career – which turned out well. I feel like I’ve used all the opportunities in surfing and obviously I’m proud of what I’ve accomplished and surfing means the world to me. But I am very, very excited for the next season of my life.”

Next, Buitendag will help manage a Christian NGO called Life Community Services in George, in the Western Cape, where she will oversee construction of a primary school.

“We are planning on building a primary school next year,” she says. “So that’s my next project. The organisation has feeding schemes, foster homes, outreach programmes, so basically it deals with the welfare of children in a holistic way. And ja, it just triggered something in me and I just feel very privileged to be part of the team. It’s like 10 minutes from my house. Actually I’ve been involved there since the first time I went, it was a high school outing.”

Buitendag has jetted between continents and coasts to ride the world’s best waves since she was 13. Now the time has come to settle down. She reiterates her enthusiasm: “I haven’t been this excited in a long time. We’ll see where to from here, but that’s what’s next in the pipeline for the moment.”

Commenting on Buitendag’s plans, former Billabong surf events coordinator Laureen Payne says: “That’s so typical of Bianca, that’s the way she is. Such a gentle soul with so much to give. She’s well respected in the surfing world, humble and well mannered with time for everyone.”

When not catching swell, Buitendag obtained a bachelor of science degree in finance and accounting from Northeastern University in Boston.

“It was another opportunity,” she says. “Northeastern had a scholarship agreement with the World Surf League [the governing body for professional surfers]. The university came to campaign at an event in California and I decided to take it up. A six-year, part-time degree. I really enjoyed it.”

Buitendag describes her background as traditional Afrikaans, saying values such as not letting opportunities slip by were instilled in her from an early age.

She first splashed in rock pools, learning to surf with her late father Colin in Strand near Cape Town. She relays how her mother, Yvette, only learnt to swim at 13, eventually becoming an avid surfer, too.

In Buitendag’s early teens the family moved to Victoria Bay, near George, where they didn’t own a television, playing in the ocean instead. “For a year we rented a really small drywall house in Vic Bay, which didn’t have a TV or anything fancy,” she says. “And we just ended up in the ocean for hours at a time, before and after school. These are some of my fondest memories.”

How does she fuel her 1,85m body? Buitendag laughs. She is known to have cookbooks piling up – unopened Christmas gifts.

“That’s a very good question. I mean, here at the village there’s like 17 food stations. I’m going to be very upset when I have to eat my own food again, back home.”

Wrapping up, she describes her Olympic medal as “a life-changing moment” and a miracle.

“I mean, so many things had to align for this to come true and obviously I’m very aware that it was some type of miracle.”

On her official website she credits her father for pushing her into her first wave: “He introduced me to what I now call my first love, the ocean, and to a sport that I will do for as long as I can walk. My parents are the reason I have all these privileges today. They have been there every heat with a hug of assurance that they will be proud no matter the outcome.”

Back in Japan: surfing – along with baseball, softball, skateboarding, karate and sport climbing – were newly included in the 2020 Games, in a bid to bring more youth-focused sports to the Olympic line-up. DM/MC