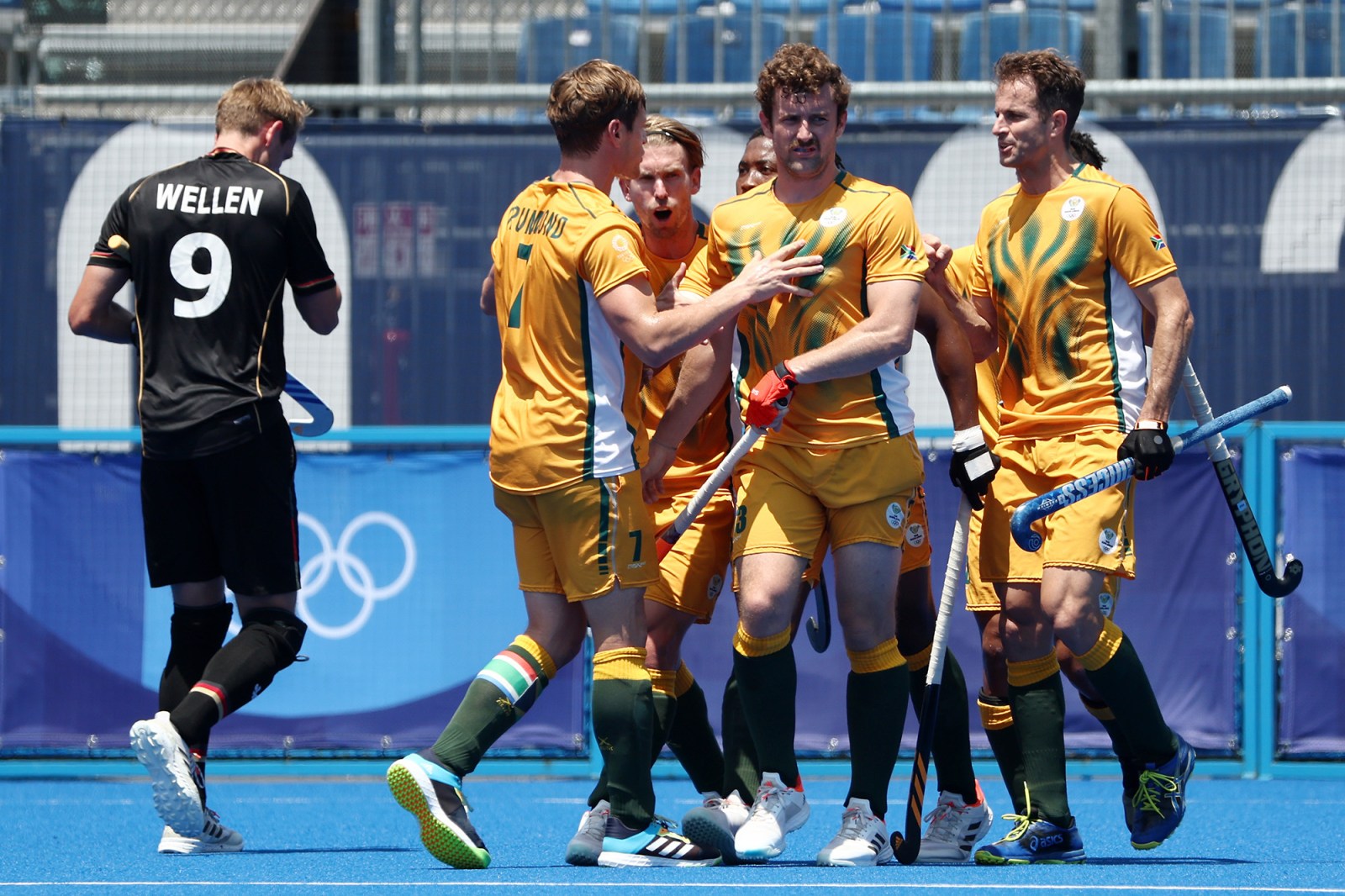 Matthew Guise-Brown of Team South Africa celebrates scoring the first goal with Timothy Drummond and teammates while Niklas Wellen of Team Germany walks away during the Men's Preliminary Pool B match between South Africa and Germany on day six of the Tokyo 2020 Olympic Games at Oi Hockey Stadium on July 29, 2021 in Tokyo, Japan. (Photo by Buda Mendes/Getty Images)

South Africa’s men’s hockey team scored a famous 4-3 win over Germany at the Tokyo Olympics, the fourth-ranked team in the world.

South Africa’s men’s hockey players have been knocking on the door against the so-called “bigger” nations at the Tokyo Olympics, but on Thursday they barged right through, beating Rio 2016 bronze medallists and world No4 Germany for the first time in an international competition.

The 4-3 winning score reflected how close the match was and it has left South Africa with a minuscule chance of qualifying for the knockout stages.

South Africa meet Canada on Friday, but even if they win, they are unlikely to progress to the knockout stages due to Germany’s much better goal difference.

Germany have a positive seven-goal difference while South Africa has a negative eight difference. It would require a huge win over Canada, and a heavy Germany loss against the Netherlands for South Africa to progress.

If Germany secure one or more points through a draw or a win against the Netherlands in their final match, they will be guaranteed a place in the knockout stages.

But considering the level of competition and the lack of preparation and funding that the hockey team had to overcome, beating Germany was a massive result — the equivalent of Japan beating the Springboks at Rugby World Cup 2015.

South Africa last won a match at the Olympics in 2012, when they beat India 3-2. The hockey side did go to Rio 2016 and before this tournament they were forced to crowd fund their preparation programme.

South Africa were impressive in their previous three games — all defeats — in Pool B, but they took the fight to their higher-ranked opponents in all matches. They went down 3-1 to Great Britain, led 3-0 before losing 5-3 to the Netherlands and were involved in a 13-goal game against Belgium, losing 9-4.

On Thursday they came back from 2-1 down to overcome the Germans, showing typical resilience and no lack of skill.

Germany scored the opening goal with a variation that was eventually prodded home by a diving Timm Herzbruch but South Africa were not cowed.

They pulled level with their first penalty corner of the game as Matt Guise-Brown got his second of the tournament with a low, strong drive. That parity wouldn’t remain for long and South Africa’s next circle penetration created another goal with vice-captain Keenan Horne diving onto the ball and finishing superbly to give the African champions the lead.

Although it was a lead they would hold until the end of the first quarter, the European runners up would not lie down and back down. They fought back with two goals in the second quarter to lead at half-time 3-2.

Constantin Schaib netted the equaliser through a field goal, picking up a rebound, before Lukas Windfeder scored another goal from a penalty corner. Although Tobias Hauke would receive a yellow card just before half-time, the South Africans weren’t able to capitalise on it.

As the heat made things more difficult, the South Africans defended with heart in the third quarter denying a number of German opportunities before springing the perfect counter-attack with Nic Spooner bursting through the middle and finishing superbly into the bottom left corner. That made it 3-3 going into the final quarter.

There was almost a surreal feeling as Germany allowed South Africa into the circle, Dayaan Cassiem crossed the ball which took a massive deflection and Cassiem was awarded the goal. The South Africans took the lead, what would be the decisive lead with 12 minutes remaining.

There was a frantic finish to the match, as Germany attacked relentlessly, but South Africa held on for a famous victory.

“We weren’t on the pitch today in all of the little things… We never got the dynamic which you need against a team like South Africa.” DM