He said Peru needs to recover sovereignty over its natural resources, renegotiate its free trade deals and said he’ll turn the official presidential residence — which is named after the Spanish conquistador Francisco Pizarro — into a museum.

The speech contrasted with Castillo’s recent attempts to portray himself as a moderate, and the nation’s dollar bonds fell while he spoke. But he also pledged to respect the nation’s economic model and private property, and said the economy needs order and predictability to prosper.

“A government of the people has arrived to govern with the people and for the people,” Castillo said in his inaugural address. “This is the first time that our country has been governed by someone from the rural small farmer class. A person who belongs, as do many Peruvians, to the sectors that have been oppressed for so many centuries.”

Castillo said he’ll double spending on public education, introduce universal free health care and pension coverage, and make Internet access a right. He said he’ll call a referendum on convening a constituent assembly to rewrite the constitution, which he said is necessary for Peru to recover control of its natural resources. Peru is a producer of copper, precious metals and natural gas.

He had been scheduled to swear in his ministers on Wednesday afternoon. But he still hadn’t named any of them by the time of his inauguration, and he postponed the ceremony to July 30. 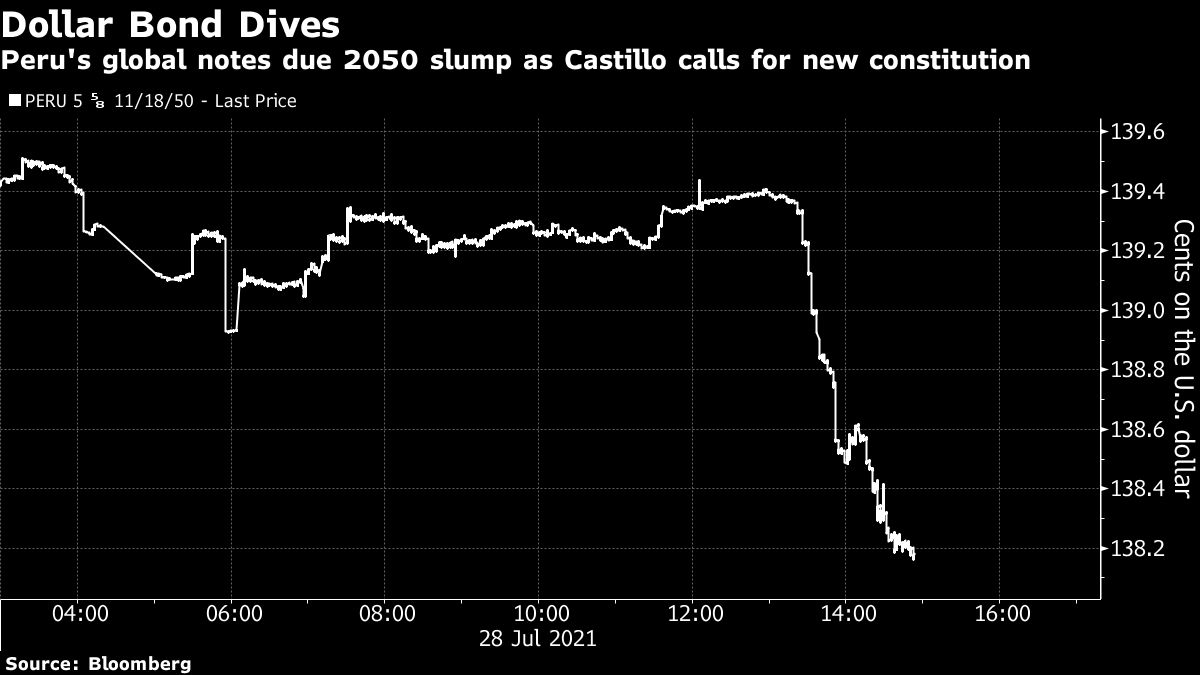 The 51-year-old, who has no previous experience in national politics or high office, takes the helm of a nation in turmoil, which last year had three presidents in little more than a week. He successfully tapped voters’ anger after Peru suffered the world’s worst Covid-19 mortality rate and a deeper economic slump than all major economies in the Americas during the pandemic.

The rise in poverty and unemployment caused by the virus has also contributed to a rise in radical politics elsewhere in the Andes. Colombia has been buffeted by violent anti-government protests in recent weeks, and a former guerrilla, Gustavo Petro, is leading in polls ahead of next year’s presidential election. In Chile, former student protest leader Gabriel Boric is leading the race for the presidential election in November.

Castillo’s promises are likely to put him on a collision course with Peru’s political and business establishment. During the campaign, his pledge to boost spending on health and education struck a chord with poor Peruvians who felt they never fully benefited from the country’s mineral riches. But his proposals to re-write the constitution, and the fact that he belongs to a Marxist political party, worry local business leaders and foreign investors alike.

In recent days, Castillo was unable to form a ruling coalition in congress, which will make it hard for him to pass these reforms, and even puts him at risk of being impeached like former President Martin Vizcarra.

Investors had been closely watching for the composition of Castillo’s cabinet. That he still hadn’t named them on the morning of his inauguration shows “a high level of improvisation, but also, it seems, lots of wrangling between the different factions supporting Castillo for their quota of power,” said Jo-Marie Burt, an analyst at the Washington Office on Latin America, which promotes human rights and democracy.

Another possible headache for the new leader will be his relationship with his own Free Peru party, which has 37 of the 130 seats in congress. The party was founded by Marxist neurosurgeon Vladimir Cerron, who praised autocrats such as Cuba’s Fidel Castro. Castillo has tried to distance himself from party hardliners in recent weeks, who want him to pursue a radical course, but he still needs their support.

“It was difficult for him to form a coalition, and he has a serious problem to resolve which is his relationship with Peru Libre and, above all, with Vladimir Cerron,” said Fernando Tuesta, a Lima-based political scientist.

Investors are now watching Castillo’s next steps to gauge whether he’ll be more like recent Latin America leftist leaders such as Bolivia’s Evo Morales, Uruguay’s Jose “Pepe” Mujica and Brazil’s Luiz Inacio Lula da Silva, who presided over growing economies and falling poverty, or whether he’s more akin to the more radical leaders of Cuba and Venezuela, whose policies led to hunger and mass emigration.

Peru’s dollar bonds due in 2050 slipped almost a cent to 138.6 cents on the U.S. dollar on Wednesday amid the remarks. It was his proposals for the constitution that generated the most fear and uncertainty, said Rodolfo Rojas, a partner of the Lima-based Sequoia political advisory group. Local markets were closed for a public holiday. 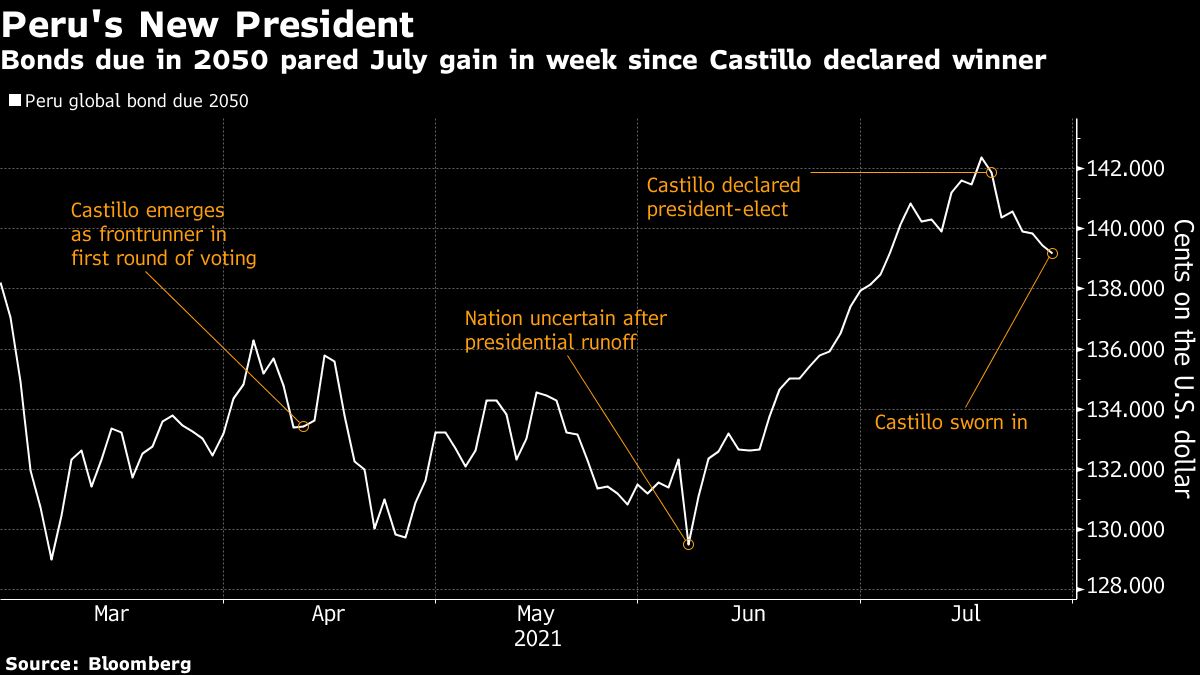 In the election last month, Castillo swept the rural and Andean regions of the country, while his opponent, Keiko Fujimori, won the capital, Lima, and coastal cities in the north. Castillo won by 50.1% to 49.9%.

The vote took place on June 6, but the result was delayed by weeks of vote recounts and lawsuits after Fujimori alleged fraud. The U.S. and the European Union both said the election was clean.

–With assistance from Sydney Maki.