Yes, we can afford a Universal Basic Income Guarantee 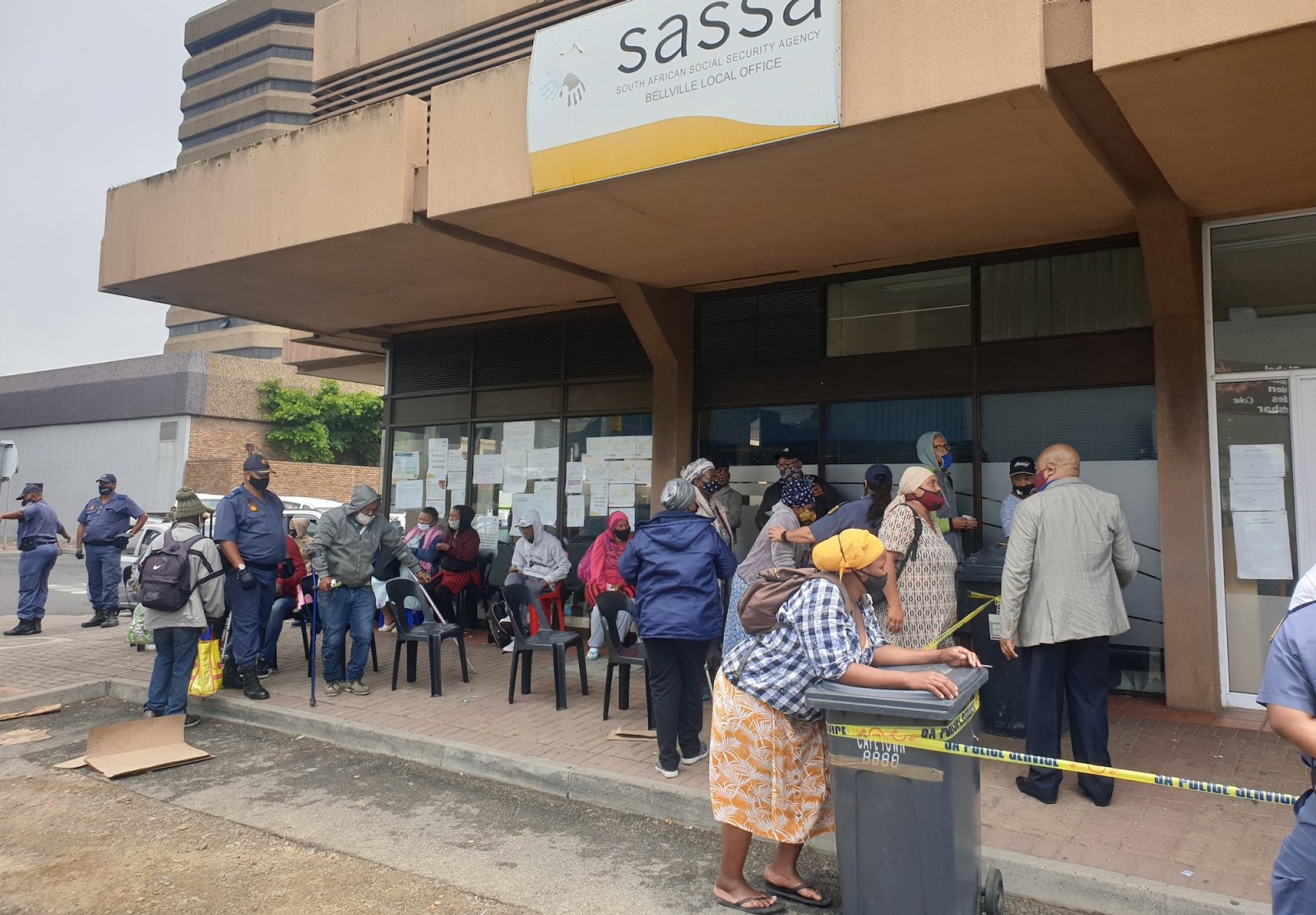 Queues outside the Bellville offices of the SA Social Security Agency. A report on social grants has been prepared by the Southern Africa Labour and Development Research Unit at the University of Cape Town. (Archive photo: Mary-Anne Gontsana)

Political will and strategic taxation channels could help bridge the yawning divide between the haves and the have nots in South Africa.

Aliya Chikte is a Research Associate at the Institute for Economic Justice, where Gilad Isaacs is the Director.

The reinstatement by President Cyril Ramaphosa of the Covid-19 social relief of distress grant and its extension to caregivers take us one step closer to a universal basic income guarantee.

The Covid-19 pandemic has placed the idea of a Universal Basic Income Guarantee (UBIG) back on the agenda, as can be seen from the numerous demands from civil society groups and community organisers. This recognises, in the context of a long-standing structural unemployment crisis, that poverty and inequality cannot be addressed only through expanding employment.

However, the SRD grant of R350 per month can, at best, cover only 60% of a person’s minimum required food intake. In the short term, the SRD grant should be increased to at least R585, which is the food poverty line. This would cost an additional R17-billion until March 2022. The inadequate amount and the delays in implementing this are reflective of a government whose social policies have become reactive and crisis-driven.

A permanent UBIG is a chance to close the gaps in South Africa’s social security net. The question is then not about whether a UBIG should be implemented, but rather how it should be designed and financed.

To answer part of this question, the Institute for Economic Justice (IEJ) has put forward a financing policy brief for a UBIG, outlining 19 recommendations that will allow South Africa to raise funds to tackle poverty. The policy brief serves as a supplement to an earlier one on UBIG published by the IEJ in March 2021 and a summary of further research produced for the IEJ by DNA Economics. The proposals include adjustments to income taxes, consumption taxes, and wealth and property taxes; removal of corporate tax breaks; the reduction of wasteful and irregular expenditure; and the recoupment of expenditure on UBIG through existing value-added tax (VAT).

Responding to South Africa’s extreme levels of inequality, all financing proposals are progressive and therefore remove or limit fiscal measures that currently disproportionately benefit the wealthy.

How much and for whom?

There are numerous suggestions for the amount at which a UBIG should be set. We present a set of options, ranging from the food poverty line of R585 per month to the initial starting level of the national minimum wage of R3,500 per month. These amounts are not, on their own, sufficient to provide a dignified standard of living, but rather seek to address the depth and severity of poverty by meeting people’s most basic needs.

The preferred approach is one of universality, allowing all people between the age of 18 to 59, currently excluded from permanent social security benefits, to be eligible for the UBIG. In tandem, if South Africa is to reach the National Development Plan’s objective of reducing poverty to 0% by 2030, then the child support grant should also be increased to at least the level of the food poverty line.

The universality ensures that lower-income taxpayers will benefit more from the income guarantee than they contribute in new taxes. The net benefit varies according to income brackets. For example, if a UBIG of R585 per month is provided, 84% of taxpayers will be net beneficiaries.

How to finance this?

The IEJ puts forward 19 tax proposals. These are options, and are not necessarily proposed as a package to be implemented simultaneously.

Adjustments to income taxes include:

Proposed changes to taxes on products consumed include the introduction of a VAT rate of 25% on luxury goods; a temporary increase in excise duties; and an increase in carbon taxes to one-quarter of the European Union standard. We estimate that changes to such consumption taxes will result in an additional R13-billion that can be used to finance a UBIG.

These provide good revenue-raising options but do not tax accumulated wealth. For this reason, we propose a wealth tax. Though South Africa has one of the highest levels of wealth inequality, a wealth tax has historically been excluded from the tax framework. Using the wealth tax simulator from the World Inequality Database, we show that a 1% wealth tax for the top 1%, and a 3% wealth tax for the top 0.1% would generate R59-billion in revenue in the medium to long term. While a wealth tax is not an immediate source of financing, it is an important proposal to ensure the sustainability of a UBIG.

It is also possible to tax the income that derives from wealth, which is also highly unequally distributed. A currency transaction tax (CTT) of 0.005%; raising the Securities Transfer Tax from 0.25 to 0.3%; and a financial transaction tax of 0.1%, would raise R3.68 billion, R1.37 billion, and R41 billion respectively. These tax the buying and selling of different financial assets and have the benefit of reducing stock market speculation.

An increase in the estate duty tax would mean higher taxes when wealth is passed on after someone’s death. The proposal would align the tax to personal income tax rates, ensuring greater equity across the tax system. Given the skewed nature of accumulated wealth under apartheid, this seems necessary.

This combination of taxes on wealth and income that derives from wealth would add R48-billion to government revenue.

In addition, we propose scrapping ineffective corporate tax breaks — such as the employment tax incentive — and redoubling efforts to tackle tax evasion. The IEJ tax proposals target a 25% reduction in profit shifting of multinational corporations. Combined, this would free up a total of R18-billion in additional revenue. We also target a 30% reduction of irregular expenditure reported by the Auditor-General, freeing up R36.4-billion. A further reduction of wasteful expenditure in Cabinet and government departments would provide an additional R1.85-billion.

A UBIG would spur a host of positive spill-over effects in the economy, including shifting unspent funds from the wealthy and corporates to poor households, thus injecting spending into the economy that favours locally produced goods. This would also increase tax revenue as the economy grows. These all need to be investigated. One easy element to calculate is that around 12% of any expenditure on a UBIG would be recouped back by the state via VAT.

This array of financing proposals shows that implementing a UBIG progressively and sustainably is feasible in the short term. Furthermore, some funds could be raised through additional debt, or other avenues.

A UBIG is an important component of a broader package of social support that a capable state should ensure for all. The urgency of the moment, in addition to the longstanding persisting patterns of poverty and inequality, needs to be recognised and reflected in the debate around the implementation of a UBIG. Addressing extreme poverty is therefore not simply about financing constraints, but rather about willingness to take the immediate measures that this moment demands. DM

Aliya Chikte is a Research Associate at the Institute for Economic Justice, where Gilad Isaacs is the Director.