A deserted street in the central business district of Sydney, Australia, on Tuesday, July 27, 2021. Sydney's month-long lockdown shows no signs of being eased as the city's daily Covid-19 cases keep climbing, even as other Australian cities move to open back up after bringing their clusters under control.

(Bloomberg) --Sydney’s month-long lockdown will be extended by at least another four weeks, with Australian authorities failing to flatten an outbreak of daily Covid-19 cases that on Wednesday surged to another record.

New South Wales state Premier Gladys Berejiklian said the lockdown has been extended until at least August 28. The restrictions began on June 26, when 12 new cases were recorded in the local community. The city’s outbreak has since swelled — fueled by the spread of the highly-contagious delta variant — with 177 more cases recorded on Wednesday, she told reporters.

Berejiklian said the harshest lockdown restrictions, now in place in regions of southwest Sydney, will be extended to other areas in the city’s west. A vaccination campaign will also be ramped up for high school students in those regions. But she made a concession to the economy, saying that the construction sector can restart work in other areas of the city.

She also indicated that her state will receive additional funding support from the federal government to bolster the economy, with an announcement expected as early as later Wednesday. 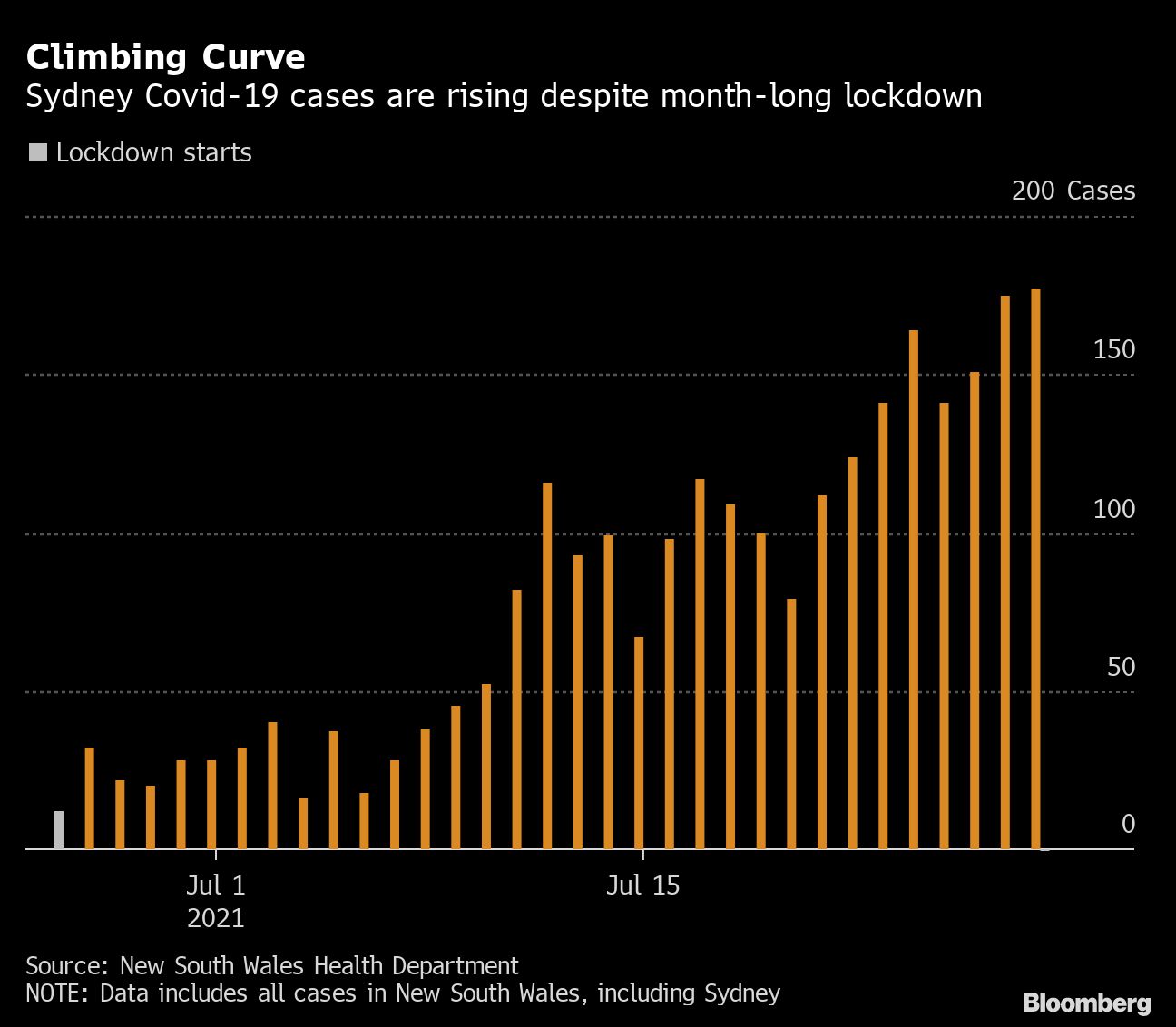 Berejiklian has been criticized by some health experts and political rivals who say she was too slow to implement lockdown in the city of 6 million people, in a bid to keep Australia’s most economically-important state — responsible for about a third of national gross domestic product — open for business.

While fellow cities Melbourne and Adelaide exited their most recent lockdowns early Wednesday, Sydney’s outbreak highlights how the entire country is increasingly vulnerable to the delta variant, which has leaked out of the fragile hotel-quarantine system for returning residents into the local community.

With Australia’s most-populous city to be sealed off from the rest of the nation for at least another month — affecting the tourism and retail sectors — it’s becoming clear that the economic impact could be severe, at least in the short term. The economy will contract by 2.7% in the third quarter, according to Commonwealth Bank of Australia, while Australia & New Zealand Banking Group Ltd. is forecasting a 1.3% contraction.

The failure to stem the outbreak shows the challenge so-called “Covid Zero” nations face in eliminating the virus, as variants including delta break through their defenses. Like economies such as Singapore and Taiwan, Australia is finding that strategies that worked last year — such as tight border controls and enforced quarantine for returning residents — are falling short as the new strains spread across the globe.

Exacerbating Australia’s problems, the government of Prime Minister Scott Morrison has early success in halting Covid, making it slower than many other developed nations in securing and rolling out vaccinations.

With No Plan B, Australia’s Covid Zero Strategy Hits Limit

The country has administered enough doses for just 22% of its population, according to Bloomberg’s Vaccine Tracker, compared to 54% in the U.S. Mixed messaging over the safety of AstraZeneca Plc’s shots — which have comprised the bulk of the rollout so far — has caused some vaccine hesitancy among Australians.

Morrison has defended his government’s vaccine strategy, saying an accelerated rollout puts it on track to provide enough jabs for all Australians who want them by the end of the year. But he hasn’t given a timeline for reopening or indicated how many Australians would need to be vaccinated before that could happen. More clarity could come on Friday after a meeting of the National Cabinet.

–With assistance from Georgina Mckay and Tim Smith.