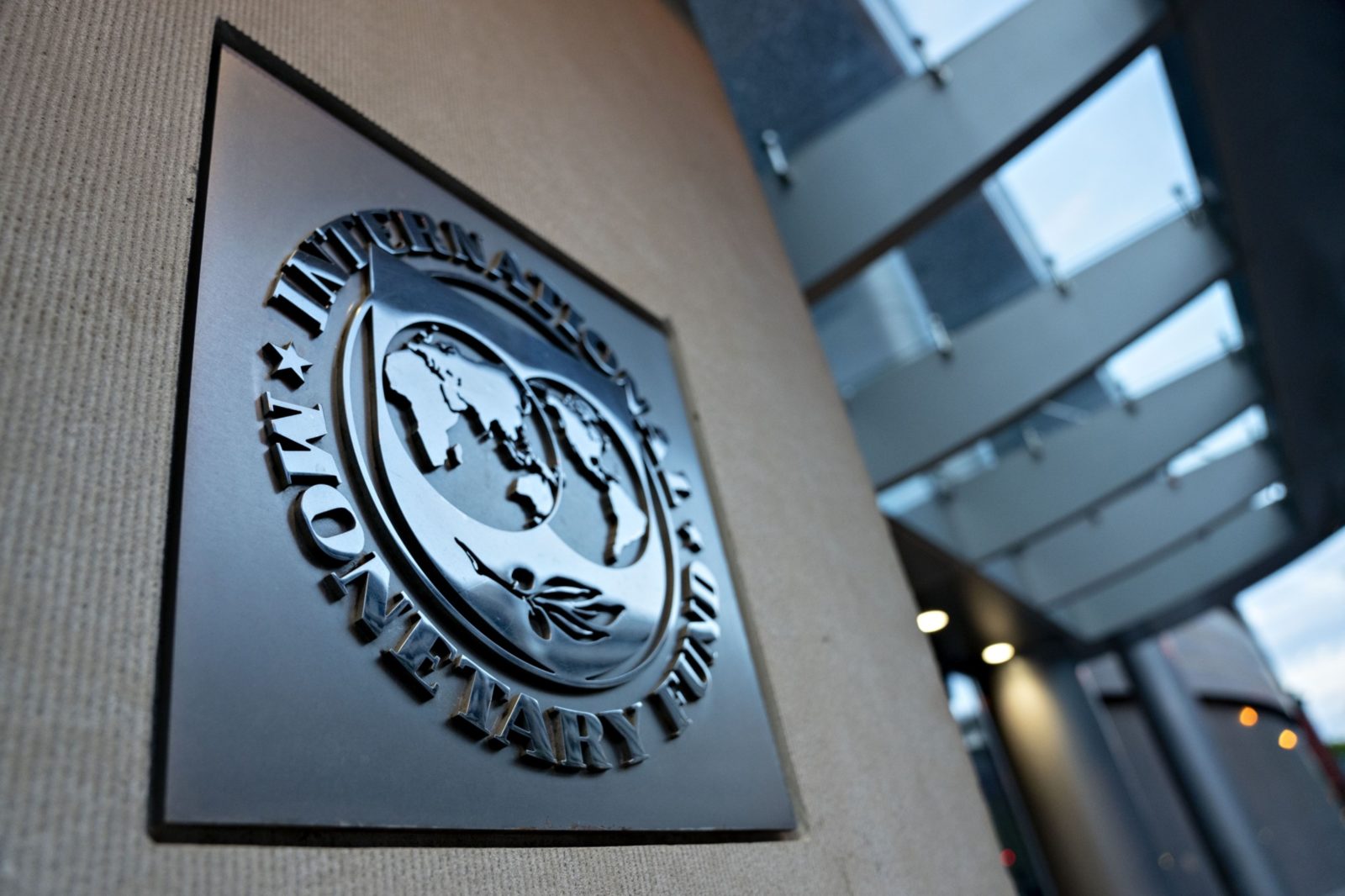 The International Monetary Fund headquarters in Washington, DC, US.

Flash PMI statistics highlight the economic vulnerability of the global economy as a result of widespread and still deteriorating global supply chain conditions. The latest IMF World Economic Outlook expects supply-demand mismatches to be transient, but cites these as a key risk should they prove persistent.

What was thought to be a temporary disruption in global supply chains, largely limited to semiconductors and the goods stacked up on container ships caught in the Suez Canal when the Ever Given ran aground, has turned into a much wider and more sustained issue for the global economy.

This week’s IMF World Economic Outlook highlighted that, while it expects inflation to be transitory as a result of what it still sees as transitory supply-demand mismatches, “more persistent supply disruptions and sharply rising housing prices are some of the factors that could lead to persistently high inflation”.

Gita Gopinath, IMF economic counsellor and director of the research department, attributes recent price pressures to, for the most part, unusual pandemic-related developments that have prompted transitory supply-demand mismatches. She expects inflation to return to its pre-pandemic ranges once these disturbances work their way through prices, though uncertainty remains high.

What we do know is that manufacturers across the world are still on the receiving end of disruptive supply chain delays and, in many instances, prices are being increased to reflect these capacity constraints. These realities were evident in the latest batch of HIS Markit Flash PMI Indices, which showed the state-of-play across the developed markets.

In addition to falling to a four-month low in July, the IHS Markit Flash US Composite PMI Output Index also highlighted that lead times had “lengthened markedly and to the second-greatest extent on record”. The results of the survey showed that manufacturers had responded to supply chain disruptions by buying more and building safety stocks of the inputs needed to produce their goods.

IHS Markit pointed out that as a result of stronger demand and a scarcity of materials, cost burdens had increased at their fastest rate ever. Chris Williamson, chief business economist at IHS Markit remarked: “Short-term capacity issues remain a concern, constraining output in many manufacturing and service sector companies while simultaneously pushing prices higher as demand exceeds supply.” However, he added that there are already signs of inflationary pressures peaking, as witnessed in input costs and selling prices falling for two months in a row.

Meanwhile, the Europe Flash PMI found that surging demand and constrained supply were putting pressure on operating capacity “to a degree unprecedented in the survey’s history”. Average selling prices for goods and services thus increased at a near-record pace in July.

The extent of the supply chain challenges and delays in getting goods to where they are needed are well-captured in the Global Manufacturing PMI Suppliers’ Delivery Index, which, as seen in the graph below, has slumped well below 50, which indicates longer delivery times.

Williamson conducted in-depth research into the supply delays, capacity constraints and price pressures that are reflected in the index. He explains that the Delivery Times Index illustrates when supply issues are becoming more widespread as suppliers struggle to meet demand for inputs from factories. 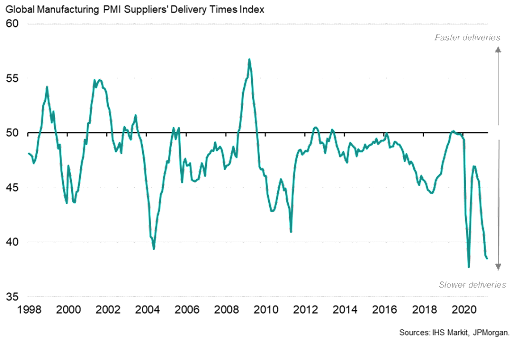 He adds that the index can be considered as a gauge of the extent to which supply and demand are in equilibrium, and the impact any imbalance may have on future prices. The graph below shows the relationship between the index and global consumer price inflation. 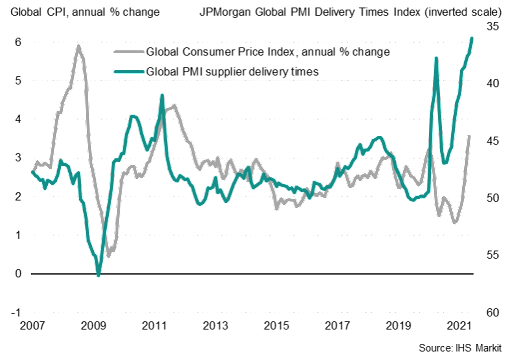 However, the supply-demand dynamics that underpin the index have prompted different price behaviour at different times. For instance, one of the most recent disruptions to the global supply chain occurred when China was hit by the Covid-19 pandemic and closed its factories and shipping. In this case, the unprecedented lengthening of the supply chains didn’t prompt rising prices, because of the simultaneous collapse in demand.

Supply shortages as a result of the Japanese earthquake and tsunami in 2011 did, however, see prices surge because of the higher demand that prevailed globally.

Another global crisis that stirred up inflation worries was the 2008 financial crisis. In this instance, prices ultimately fell because, as Williamson points out, the PMI data at the time showed that a spike in manufacturing prices was not a result of supply shortages and more likely a result of speculation than “fundamental factors”.

This year – as the pandemic has extended into its second year – supplier delivery times have broadly deteriorated and upward price pressures are evident as a result. The graph below shows that all countries reflected have seen delivery times deteriorate markedly. But record supply chain delays in the first quarter of this year have been confined to Europe, while the US and Asia had been far less affected. 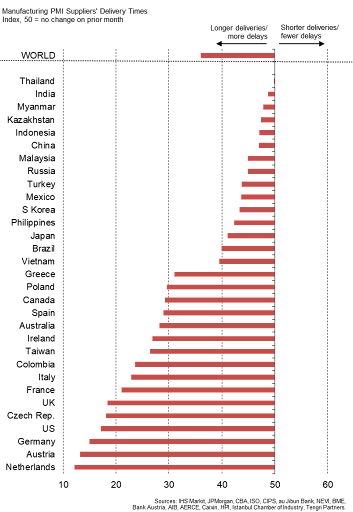 Supply chain delivery times across the sectors are also revealing. All the key sectors have experienced longer delivery times, but the biggest delay is still being experienced in the technology equipment sector, given the protracted issues in the supply of semiconductors and other inputs.

The paper and forest products sector is one of the top five sectors that has seen a huge increase in delivery times. The impact of supply disruptions in this sector were evident in this week’s surprise decline in new home sales in the US because of the shortage of construction materials. 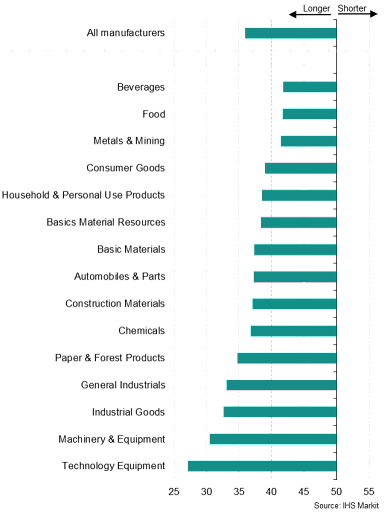 Such a gaping imbalance between demand and supply is a real worry because it is out of these that historic crises are made. It also highlights how far away we are from achieving some semblance of normality in the global economy – one that is conceivably sustainable into the future. BM/DM