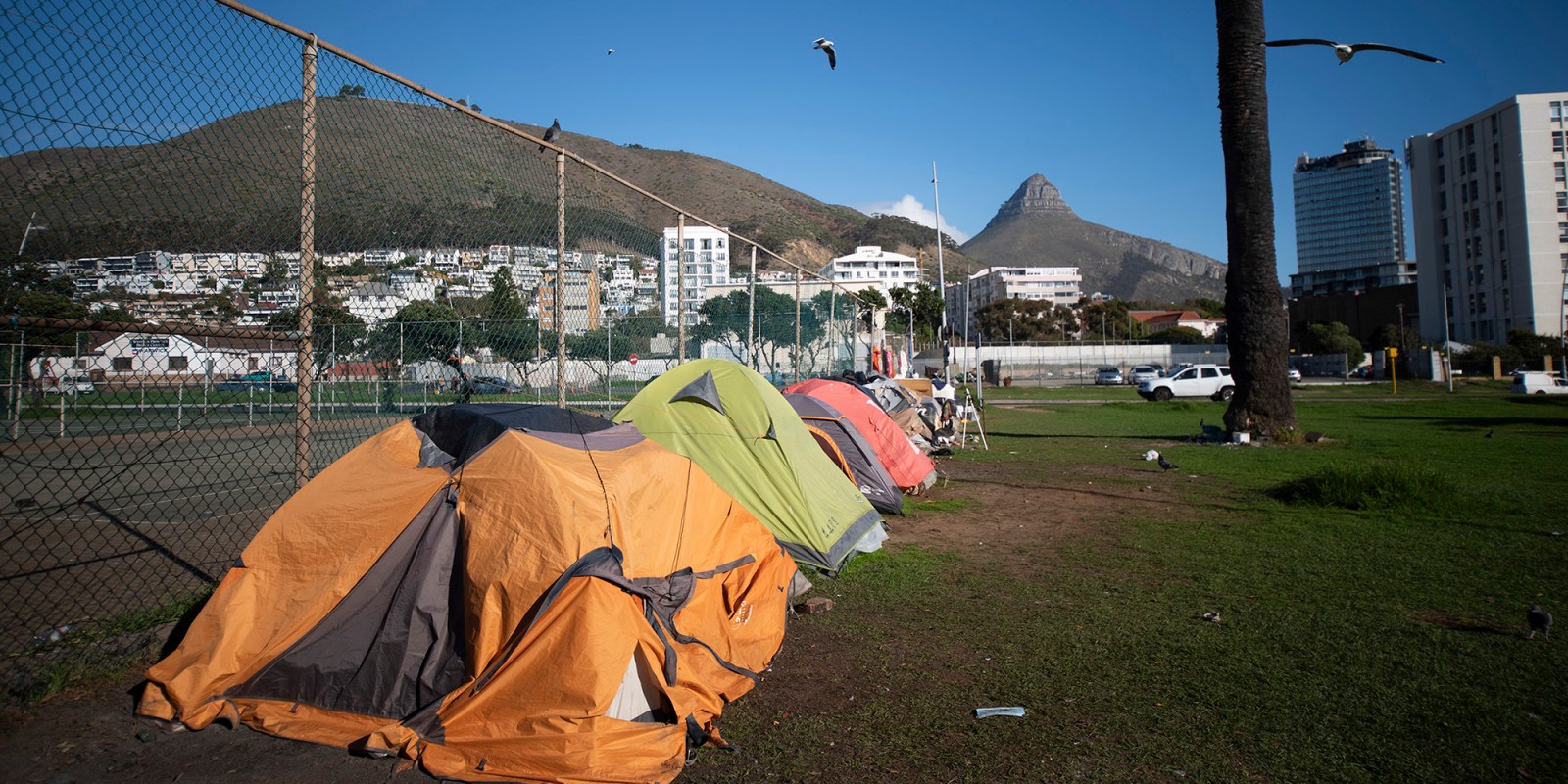 South Africa’s Covid-19 vaccination programme currently requires that people enter an identity number when registering on government’s electronic system and present an identity document when they go to get jabbed. This makes it hard for homeless people without IDs to get vaccinated. Siyabonga Kamnqa reports from the streets of Cape Town.

Daylin Jacobs coughs heavily as he shares an entjie (cigarette) with a friend who, like him, is also living on the street under one of the bridges in Cape Town.

When asked if he has or will be vaccinated, Jacobs says, “My broe you can’t ask me about vaccination. No one cares about coming here and educating us about Covid-19 or the vaccination process. We are just a forgotten people, nobody gives f*k*l about us. Right now I am desperate for a job to provide for the mother of my two laaities. I am a strong and healthy man and don’t show any symptoms of this Covid-19,” he says as he continues coughing.

But 42-year-old Nokuzola Mzizi who sleeps on the side of the road next to the Cape Town bus terminus says she looks forward to being vaccinated.

“Yes, I’ve registered [with] the help of a friend who works at the library. I am just waiting for the response to go and get the vaccine. I have no underlying illnesses that I know of,” she says. “It’s mostly flu because of the winter season and the fact that I sleep outside. Otherwise, I am fine,” she says.

For people who are homeless that approach the shelters, however, there are often more support services available.

Having been vaccinated recently, Gavin Johnson (56) says he is “fit as a fiddle” and didn’t feel any side effects. Johnson, a father of three from Mitchells Plain has been living on the streets since 2007 after his divorce.

He is now among the people who are accommodated at the Culemborg shelter in the Cape Town CBD.

When the announcement of vaccination came, Johnson says he was “the first to jump out of bed” with excitement and went to register.

“It was very important that I get the vaccine for my own health. I am glad that it went smoothly and I couldn’t feel any side effects except for some minor headache. I would encourage everyone out there, especially the homeless, to get vaccinated. It is definitely the right thing to do,” he says.

Johnson says he is also grateful for the regular visits by healthcare workers who come every two weeks for health checks at the Culemborg site.

“It is not only about the pandemic, but our health is prioritised here,” he says.

“We don’t know where this myth comes from but they often say that they are scared that they won’t get pregnant if they vaccinate. And we have to respect their wishes not to be vaccinated, but we are encouraged by the majority of others who are willing to take the jab,” Mahangu says.

“Many people sleeping rough have had their IDs either stolen, lost, or removed when their belongings are moved by others. This is a serious hurdle to being vaccinated, says Knighton-Fitt. “This is further aggravated with government offices not functioning optimally during lockdown, making it more difficult to replace IDs.”

It costs R160 to replace an identity document.

Knighton-Fitt says a recent survey of U-turn clients found that 70% of people who are homeless do not have an ID and the vast majority cannot afford a replacement.

“This same problem will also impact voting during local elections. In addition to the struggle around IDs, there is also potentially a lack of information to allow people who are homeless to make an informed decision,” he says.

The pandemic, according to Knighton-Fitt, has left more people unemployed and sleeping on our streets than ever before. He says it is now more difficult for someone facing homelessness to leave the streets during this pandemic.

“Both people who find themselves recently homeless and those who have faced this for longer, struggle to access resources needed for survival during the higher level lockdowns.”

But identity documents, says Knighton-Fitt, are not the only hurdle people who are homeless face when accessing services. “There is a desperate need for clinics that are ‘friendly to people facing homelessness’ or for the government to provide nurses to assist at drop-in centres for people who are homeless.”

Knighton-Fitt says some U-turn clients have reported being turned away from clinics because of their appearance or because they have been unable to bathe. “This is obviously not ideal, he says,” particularly given the extreme circumstances and health risks associated with sleeping rough on the streets.”

“It would be unfair to say we treat them badly or turn them away. There are just instances when some of them rock up here intoxicated. But we allow them to sober up before attending to them,” says the healthcare worker.

At least one person who is homeless that Spotlight spoke to, Edgar Boois (37) who identifies as “she”, said as a multi-drug resistant tuberculosis patient she always ensures that she collects her medication at the District Six clinic.

‘Everyone is catered for’

During a recent ‘fact-finding mission’ to some shelters for people who are homeless in Cape Town, Western Cape Health MEC Nomafrench Mbombo stressed that “everyone is catered for in the healthcare system, including the homeless” and that they will not be left behind during the vaccination period.

Mbombo said there are thousands of people who are homeless who still need assistance.

“This is what compelled me to go to Hope Exchange (one of the shelters),” she said.

“The purpose is to determine the number of homeless people eligible to register for Covid-19 vaccination, how many have been registered and to find out from the ones that have not registered what is the issue and how they can be assisted.”

She said at the one shelter 57 of the 93 people who are homeless do not have IDs and cannot be registered. According to her, the Western Cape Health Department will work with civil society organisations and the Department of Home Affairs to address issues with IDs.

Attempts to get more detail on these plans were unsuccessful.

Home Affairs spokesperson Siya Qoza only said the department is working closely with the Department of Health to ensure that all people who are homeless receive IDs. He provided no further details.

Spokesperson for the Western Cape Department of Social Development Esther Lewis told Spotlight the department funds 28 shelters in the province and also funds social workers at the shelters who help with reintegration efforts. This includes supporting people who are homeless to get ID documents.

Falling through the cracks

At present, people who are homeless who do not have IDs cannot register to be vaccinated or qualify for government’s social relief of distress grant.

Western Cape health department spokesperson Mark van Der Heever says having an identity document and not just knowing the ID number, is a crucial part of the registration process as this serves as verification of someone’s identity.

“This confirmation is done on-site when someone with an appointment needs to present their ID to verify it is the correct person. While we acknowledge this is a barrier, we aim to ensure we reach and vaccinate all eligible persons. As such we have engaged the relevant National Departments of Health and Home Affairs on a solution. We are drafting a submission to the National Department of Health to re-affirm our request for a solution to assist the undocumented people groups,” Van der Heever says.

When Spotlight visited the Culemborg site in Cape Town, many of them said their ID issues were sorted out by the City of Cape Town.

“Homelessness is a complex problem which requires action from many departments and sectors,” National Health Department spokesperson Popo Maja tells Spotlight. Maja says health services at Primary Health Care facilities are available to everyone free of charge. This includes people who are homeless.

Maja agrees that the biggest problem with vaccinating people who are homeless is their lack of documentation.

“An ID number (or equivalent) is currently a requirement for registration and vaccination. The Department of Health is working on a solution which aims to address the issue of undocumented persons,” says Maja.

He did not provide details or timeframes.

Maja also couldn’t provide statistics for the number of people who are homeless that have been vaccinated so far.

“The department does not keep statistics on the number of homeless people vaccinated but only in terms of age of people regardless of their socio-economic status,” he says. DM/MC