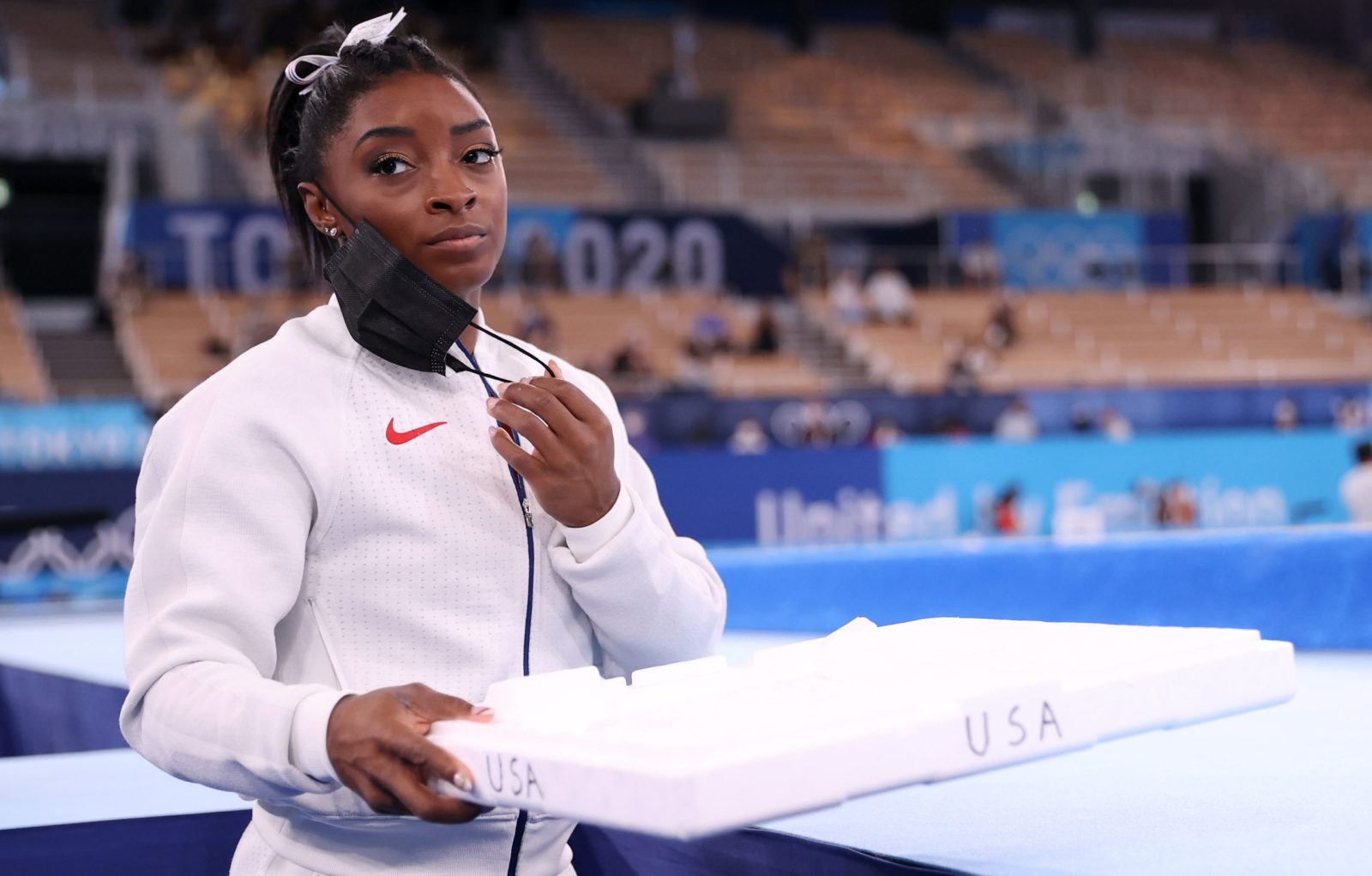 TOKYO, JAPAN - JULY 27: Simone Biles of Team United States supports her team mates by carrying their chalk after pulling out after the vault during the Women's Team Final on day four on day four of the Tokyo 2020 Olympic Games at Ariake Gymnastics Centre on July 27, 2021 in Tokyo, Japan. (Photo by Laurence Griffiths/Getty Images)

Simone Biles was left weighing her Olympic future on Tuesday after dropping out of the women’s gymnastics team final at the Tokyo Summer Games after one disappointing vault, saying she had to focus on her mental health.

For so long Biles had appeared invincible, racking up 30 world and Olympic medals in a spectacular career that was expected to come to a closely watched climax in Tokyo, as she launched a bid for six gold medals that would make her the greatest female Olympic champion of all time.

But just as her quest got underway on Tuesday, it all unravelled – the 24-year-old American later conceding that the pressure of living up to expectations had left her no choice but to stop after one vault.

The retirement from the team competition has left Biles’ future participation at the Tokyo Games in limbo.

She had been expected to feature in all six events, that included a defence of her all-around crown on Thursday followed by four apparatus finals next week.

“I do not trust myself anymore,” said Biles, fighting back tears as she met with the world’s media. “I have to focus on my mental health. There is more to life than just gymnastics.

“It is very unfortunate that it has to happen at this stage because I definitely wanted these Olympics to go a little bit better. We have to protect our mind and our body rather than just go out there and do what the world wants us to do.”

What many wanted to see was Biles take the first step towards six gold medals that would make her the greatest female Olympian of all time.

But what they saw instead was a stunning breakdown as Biles ended her evening after one vault, her score of 13.766 the lowest on the US team that, without their leader, went on to surrender the team title to Russia, and settling for silver.

Stunned and close to tears, Biles, gold medal winner on the vault at the Rio Olympics, sat dejectedly in a chair as coaches and teammates surrounded her before moving onto the uneven bars, the US sitting second, 1.067 behind the Russians.

Biles appeared to be more than simply disappointed, leaving the arena with the trainer as her teammates warmed up.

By now, coaches and officials dotted about the Ariake Gymnastics Centre had begun to chatter as Biles reappeared minutes later after slipping into her warm-up gear.

“After the performance I did, I just didn’t want to go on,” said Biles, who will pick up her sixth Olympic medal for being part of the US squad that earned silver. “We are going to see about Thursday.

There were warning signs that Biles had been struggling to live up to her high standards.

At the US Olympic trials in June, she was left in tears when she was unable to come to grips with the disappointment of her performance.

The pressure of chasing medals continued to build in Tokyo, with Biles posting on social media after Sunday’s uninspired qualification effort that she felt she was carrying the weight of the world.

“It wasn’t an easy day or my best, but I got through it,” Biles wrote on Instagram. “I truly do feel like I have the weight of the world on my shoulders at times.

“I know I brush it off and make it seem like pressure doesn’t affect me but damn sometimes it’s hard hahaha! The Olympics is no joke!”

Robert Andrews, a mental training expert who worked with Biles for about four years, told Reuters he suspected stress played a large factor in Tuesday’s outcome.

“Gymnastics probably more than any other sport… requires laser, pinpoint focus,” said Andrews. “Being a global presence, the greatest of all time… all that starts creating interference.”

He added: “If she’s this stressed out to where she has a mental block, I would approach it with caution.”

There was an instant outpouring of support for Biles on social media.

“Gratitude and support are what @Simone_Biles deserves,” White House Press Secretary Jen Psaki said on Twitter. “Still the GOAT and we are all just lucky to be able to see her in action.”

“Simone, you’ve made us so proud,” said Hirshland on Twitter. “Proud of who you are as a person, team mate and athlete.

“We applaud your decision to prioritize your mental wellness over all else, and offer you the full support and resources of our Team USA community as you navigate the journey ahead.”

Biles’s decision to prioritise her wellbeing at the Tokyo Olympics will go a long way in helping to fight the stigma of mental illness, an expert in the field said.

According to Ben Miller, a psychologist and president of California-based Well Being Trust, mental health has been marginalised in society for far too long and athletes speaking up on the topic should all be applauded.

“Other athletes that might have struggled with similar issues now feel like it’s okay for them to talk about it. There’s something very powerful in that moment,” Miller told Reuters in a video interview.

“You’re always going to have your detractors and people that say, ‘Oh well, they’re just making excuses because they didn’t perform well.’ I say that’s a shame. That is an example of stigma.”

Miller said that, while top athletes have trainers to help with the physical side of performance, a person’s mind is part of their body and should be cared for with the same diligence so they can manage the pressure of competing on a big stage.

This is especially crucial for athletes who had to endure a one-year delay to the Olympics owing to Covid-19 and are competing amid strict protocols that have left them with no family support on site and without spectators at venues in host city Tokyo.

“We’re in the middle of a pandemic still, so there’s all that social disconnect, [there are] no crowds to cheer you on, [there are] a lot of things that Covid has amplified or magnified that I think are underneath a lot of this stuff,” said Miller.

Miller said ensuring athletes can get the mental healthcare they may need will go a long way in improving their overall wellbeing, not just for their performance, but for their lives.

“We take these athletes and we train them to the peak of physical performance. We teach them, we work with them, we push them, we challenge them, and it’s focused on their bodies,” said Miller.

“And by not paying attention to their minds, they’re never going to get as much out of their bodies. And in some cases, it actually might be their minds that are the things that limit their ability to be most effective.” DM/Reuters