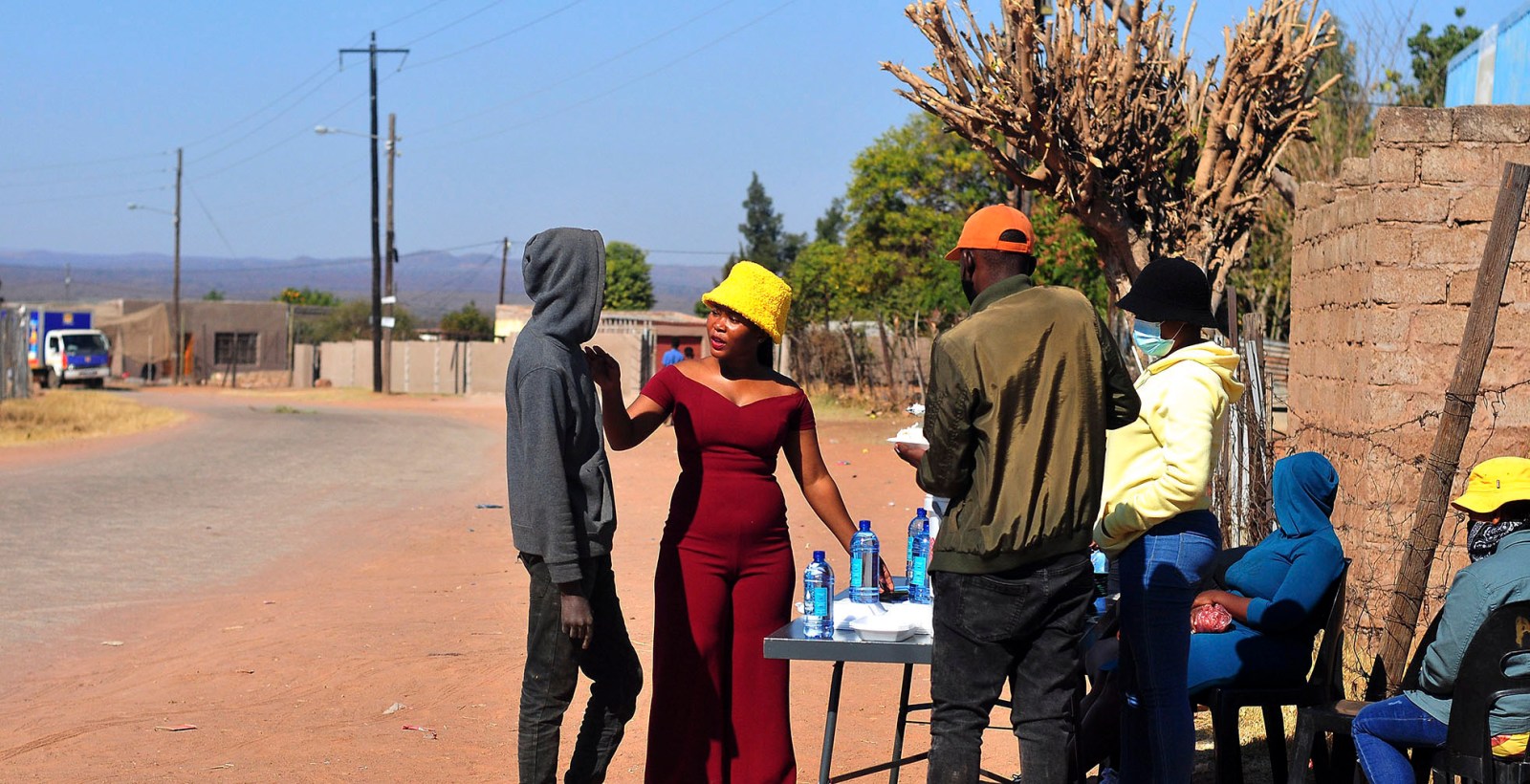 Phoebe Mahlokwane in maroon outfit talks to one of the youths from Elandskraal, Limpopo, who is addicted to nyaope.(Photo: Lucas Ledwaba/Mukurukuru Media)

After helping her younger brother kick his drug addiction a Limpopo woman is on a crusade to help many others.

A month after she started an outreach project to help youths addicted to nyaope in Elandskraal kick the habit, Phoebe Faith Mahlokwane, 30, was confronted by drug dealers who demanded that she stop her “nonsense”.

“I am fighting a serious war here in Elandskraal. They (drug dealers) are fighting me. They said they will do anything to disturb and stop me from carrying out this mission,” a distressed but determined Mahlokwane said.

After helping her younger brother Japhta, 27, kick the habit and upon realising the extent of nyaope addiction in their area, Mahlokwane embarked on a project that has put her at loggerheads with peddlers but endeared her to frustrated parents.

Nyaope, also known in other areas as woonga, is a highly addictive drug that contains heroin as the main ingredient and other substances including dagga, rat poison, cleaning material and in some instances antiretroviral drugs.

The drug has been ravaging youths particularly in Gauteng, KwaZulu-Natal and Cape Town townships but is now creeping into Limpopo’s rural villages.

Mahlokwane, who is a pastor and has a Bachelor of Arts in community and health psychology works with a team of youths from her church on the project in a bid to save lives.

On Sundays, they prepare a meal of pap, beef stew and vegetables to serve addicted youths. They set up a table near a popular spot where the youths gather regularly to smoke and buy the drug. During the engagement Mahlokwane speaks with the young residents, advising them to consider going into rehabilitation to free themselves from addiction. She also listens to their concerns and offers advice.

Church member Michael Mothemane, 28, said they noticed that addicts rarely eat, hence he volunteered to assist in the project.

“We come early to cook so that we can go and give them food so they can eat. I want to see all of [the] addicts changing and stop smoking nyaope. I want to see them as people I know and went to school with because that thing (nyaope), is messing up with their minds. Some are no longer staying at home; they are now sleeping at taxi ranks washing taxis to earn little money just to smoke nyaope. Some are selling bottles. What we want is to see them quitting the drug, be healthy and return home so that their parents can be happy,” said Mothemane.

Elandskraal, known popularly as Sevenstad, is a peri-urban village near Marble Hall in the Ephraim Mogale local municipality in Limpopo. It is afflicted by high levels of poverty, unemployment, a lack of recreational amenities and limited economic activity.

Many young people spend their days at illegal gambling dens, playing dice and cards to make some form of money. Some in the village, with an estimated 1,400 households, have allegedly died due to addiction to nyaope but this could not be confirmed.

However, the impact of the drug is glaring. A building that once housed a successful dairy project has been stripped of its zinc roof, the local cemetery’s perimeter has been stolen and an old post office building has also been stripped to almost nothing for scrap.

Mahlokwane said she decided to start the outreach because she was encouraged by how she helped Japhta quit his nine-year addiction.

“There was no jail or rehab that was able to help him to even remember his identity and to overcome the addiction,” she said.

She took him to rehab four times and reported him to the police countless times but he always ran away. So far, Mahlokwane said she has managed to send 10 young nyaope addicts to rehabilitation centres.

“The Bible says love is patient, it never gives up. It never loses faith and love covers multitudes of sins so that encouraged me to love him even more even though it was difficult,” she said.

Japhta recalled his days of being hooked on nyaope.

“When you smoke nyaope you become selfish, you don’t care who you hurt or steal from as long as you get to satisfy your addiction. I was a very bad person, stealing and terrorising people,” he said.

“People did not like me and I was always dirty. I got tired of smoking nyaope. I remembered how pretty and clean I used to be and was not happy about the life I was living. I told myself that if I get a chance to quit nyaope, I will never smoke it again. Now I am a normal person living a normal life,” Japhta said.

His sister is now inspired to help other addicts and their families.

“I strongly believe that they will recover and experience the joy we felt when my brother came back to his senses,” said Mahlokwane.

Parents of addicted children have been visiting her often to ask for her intervention. But those who sell the drug are not so happy. They are known in the community and their activities do not appear at all secret.

“They warned me and my team to leave the spot where the outreach is carried out. But I told them that I am not going anywhere as the owner gave us permission to use it as much as we want to,” said Mahlokwane.

She said she did not report the incident to the police as she wants peace and does not want to disturb the progress of the youths “as they are coming along alright”.

But Limpopo provincial police spokesperson Brigadier Motlafela Mojapelo warned that “they must inform the police because prevention is better than cure”.

“Remember our primary responsibility is to prevent crime before it gets committed and it’s cheaper to do so. Once the crime is committed, a lot of resources, both human and physical, are needed to track down the culprit,” he said.

Mahlokwane said the biggest challenge the outreach is facing, apart from financial difficulties, is community relations. She says the community has written off the addicted youths and it is difficult for addicts to trust anyone who wants to help them.

Mahlokwane said when she first approached drug users with the idea for the outreach many feared it was a ploy to get them arrested or lynched by the community.

Kgontse Mokwana, 20, has been an addict since 2018. His grandmother Mildret Mokwana, 59, said Kgontse has been troubling his neighbours and the family. Last year he was almost set alight by a mob of enraged community members for stealing.

In 2015 the family booked him into a private rehabilitation centre where he spent 11 months at a cost of R12,000. But Mildret has lost hope.

“I don’t believe that he wants to change because when he is home he does not talk about that at all but I am willing to support him if he wants to go to rehab,” she said.

Kgontse together with his friend Rushon Mogudi, 20, who is also addicted, have approached Mohlokwane for assistance.

“I want to quit nyaope and prove people in this community wrong because they say I will never change. I want to have a good relationship with my family as they don’t want and trust me anymore,” said Kgontse.

Limpopo spokesperson of the Department of Social Development Witness Tiva said they are funding 27 non-profit organisations that are running preventative programmes across the province to curb the usage of drugs, including nyaope.

“It is also important to note that no person can be forced to seek help, unless directed by a court of law. The need to seek help must be voluntary as the person with the addiction will need to work with various programmes to rehabilitate and recover,” said Tiva.

Mahlokwane hopes that she will reach her goal of establishing her own rehabilitation centre to help youths from Elandskraal and beyond overcome their addiction. DM/MC/Mukurukuru Media