The epidemic of addiction: The journey of two young men into drugs 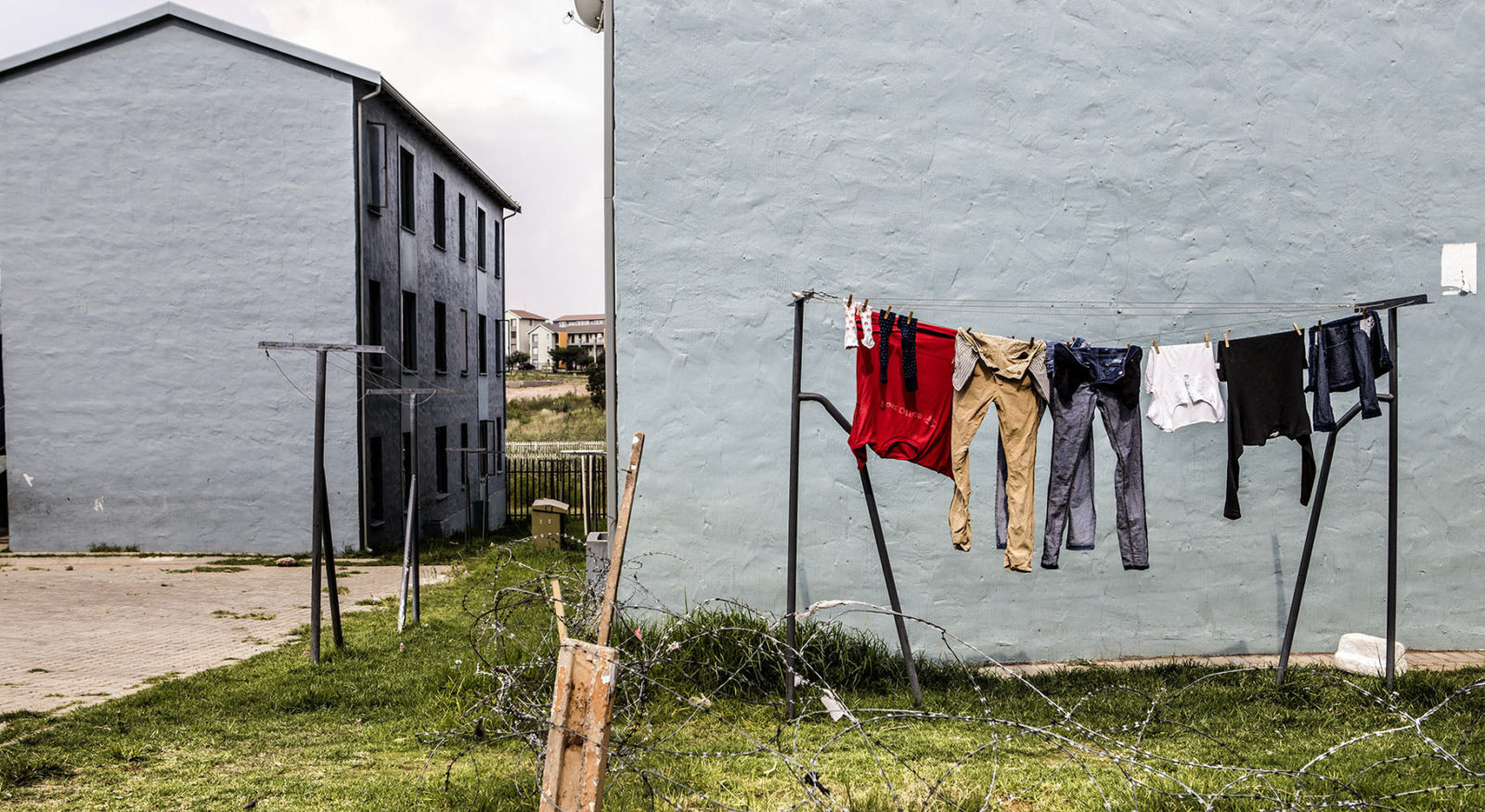 In Fleurhof on the West Rand, a barbed wire fence has been placed around a washing line to ward off thieves and prevent people from loitering on the grass in front of the flats. (Photo: Mark Lewis)

One consequence of the Covid-19 pandemic and the measures to contain it has been a significant increase in mental illness and substance use. Many young people who are unemployed or out of school have turned to dangerous drugs such as mandrax and nyaope. There is very little help available to rehabilitate them. Anthony Mafela, a former drug user and homeless writer, gives a first-hand account of the dangers young people face in marginalised communities.

I stay in Fleurhof on the West Rand. It’s a mine-dump area close to an informal settlement. Not far away, zama-zamas dig for gold and people are still living on the abandoned mining compound.

Since the pandemic started there are more and more people building shacks around our area. I notice a new shack every time I go to the shops. Most people around here are unemployed and young boys and men sit around the hostel gambling all day.

I’m a block leader in our flats. So if there’s something to fix or talk about I’m the one who will call the meeting. Or if someone has a problem in their flat, they often call me.

Pule stays opposite my flat. He used to attend Florida Park High School. He’s a quiet and humble young man.

He came to stay with his mother four years ago. She used to stay in Soweto. He often would come to help me in the vegetable garden where I grow chillies, morogo, peas and carrots.

We would talk about school and how he wants to become an accountant. He would often tell me that he is studying hard so that he can pass and go to university. We would clean up the entire yard together.

He was the only young man who always had my back. I really liked him. He was ambitious and dedicated to his schoolwork. But slowly I noticed he stopped helping me in the garden. He would disappear and when I asked his mother she would say he didn’t sleep at home.

One day, I was going to the shops and I saw him walking towards the hostel with a gang of boys. He acted as if he didn’t see me. That’s when I suspected there was something wrong

Then a few days later one of the guys from around here told me that Pule was smoking ndanda (mandrax). I was shocked. I didn’t believe it.

A week later Pule came by. He wanted to sell me a leather jacket. That’s when I knew he was into drugs. I asked him but he just denied it.

I asked him where he got the jacket from.

He said he was selling clothes now.

I knew that jacket was stolen. I didn’t want to buy something that I didn’t know where it came from. I told him that I don’t have money and asked him to stop whatever he is doing. He just left me while I was trying to talk to him.

Then sometime later, one Saturday afternoon, a 10-year-old kid called Thabo knocked on my door. He was crying and he told me Pule was fighting his mother. I went to their flat quickly and found that everything was smashed and broken. He broke a flat-screen TV and a glass table. There was water all over the place. In his bedroom clothes were everywhere.

I tried to intervene. Pule was high on mandrax.

I’ve smoked this drug. I recognised the signs. I was involved in drugs and crime when I was younger. I thought getting high was the coolest thing. I got involved in a local gang in Lenasia where I got introduced to rock lefatsi. But I quit after my friend was shot and killed in a drug incident between two gangs.

I asked Pule what happened and why he was fighting with his mother? He said his mother wanted to chase him out of the house.

“I am not going anywhere,” he said.

I spoke to his mother. She was boiling water on the stove. “Kebatla gomotsela kametsi,” she said. “I want to pour him with hot water.”

She was so furious and told me that Pule had been stealing her food and selling it to people around here. He also took her bank card and withdrew money.

“I don’t want to see him again here.”

That morning she realised food was missing when she wanted to cook breakfast for the kids. When she asked him about the food, he started threatening her and breaking things. I took Pule aside and tried to calm him down. I told him to take a walk so he can cool down.

“Why should he steal the food that he will eat? How can he steal food from his own mother?”

But he kept on swearing and shouting and his mother went outside to phone the police.

“I want him to be arrested. How could he do this to me?” she said. “I raised him well and now he’s turning against me.”

Eventually the police arrived, handcuffed him and threw him into a police van.

His mother also left with the police to open a case of theft, verbal abuse and damage to property. When she came back she said he would be attending court on Monday and she wouldn’t drop the changes. She’d had enough.

“I can’t live with having to hide my things.”

While in jail no one visited Pule. He sent a message to his mother, apologising. But she was very clear: “It’s okay for him to stay in jail because he will steal other people’s belongings. And they will come and burn my flat.”

Two months later Pule got out of jail. His aunt bailed him out but his mother chased him away and he went to stay with his aunt in Soweto. I don’t know what has happened to him.

Mandla: ‘Smoking nyaope makes me forget all my problems’

Everyone around here knows Mandla.

He is 17 years old and is always picking up beer bottles around the place. He sells them to the recyclers. I think he is doing a great job helping his grandmother. And you will never find him roaming around the streets.  He’s a bit short and likes to dress like a pantsula. He doesn’t have friends or talk much.

Everyone knows him because his grandmother sells alcohol. He stays with her and two younger sisters. Their flat is not far from mine. When he saw me he would say: “Jah Rastafari”. He always greeted me politely. I liked talking to him.  He told me he loves to dance to amapiano. And I laughed and told him to dance for me.

He told me about his life and how tough this year has been on him. This year, his mother died because of Covid. Sometimes he and his sisters had to go to school without food. He started to lose focus. So when school was closed during lockdown he decided to quit. He was in Grade 11.

Now he smokes nyaope. He says the drug makes him forget about his problems.

I asked him where he got the money to buy it.

“I’m a hustler,” he said. “I collect bottles for recycling. It’s better than going to school hungry. Smoking nyaope makes me forget all my problems.”

I asked him where his father was?

“My family don’t want to tell me who my father is,” he said. “Every time I tried asking my mother she just ignored him. Now she’s gone. I don’t know who I am.”

I felt so sorry for him. I never knew that his mother had died. I used to see her catching a taxi to work sometimes.

I thought about Mandla and Pule. There are so few opportunities for young people in Fleurhof. When schools close there is nothing to do. There are no sports fields or recreation centres. There are no community projects in our neighbourhood. Young boys are starting to lose hope and drugs make them feel better. Our government is failing its future leaders. DM/MC

Anthony Mafela is a writer with the Homeless Writers Project. He lives in Fleurhof on the West Rand, a low-income housing development area. There are close to 40 flats on his block. Most people don’t have regular jobs and there are no sports facilities or recreation halls in the area. Internet access is virtually impossible.

This story was written with assistance from Harriet Perlman. All names have been changed.