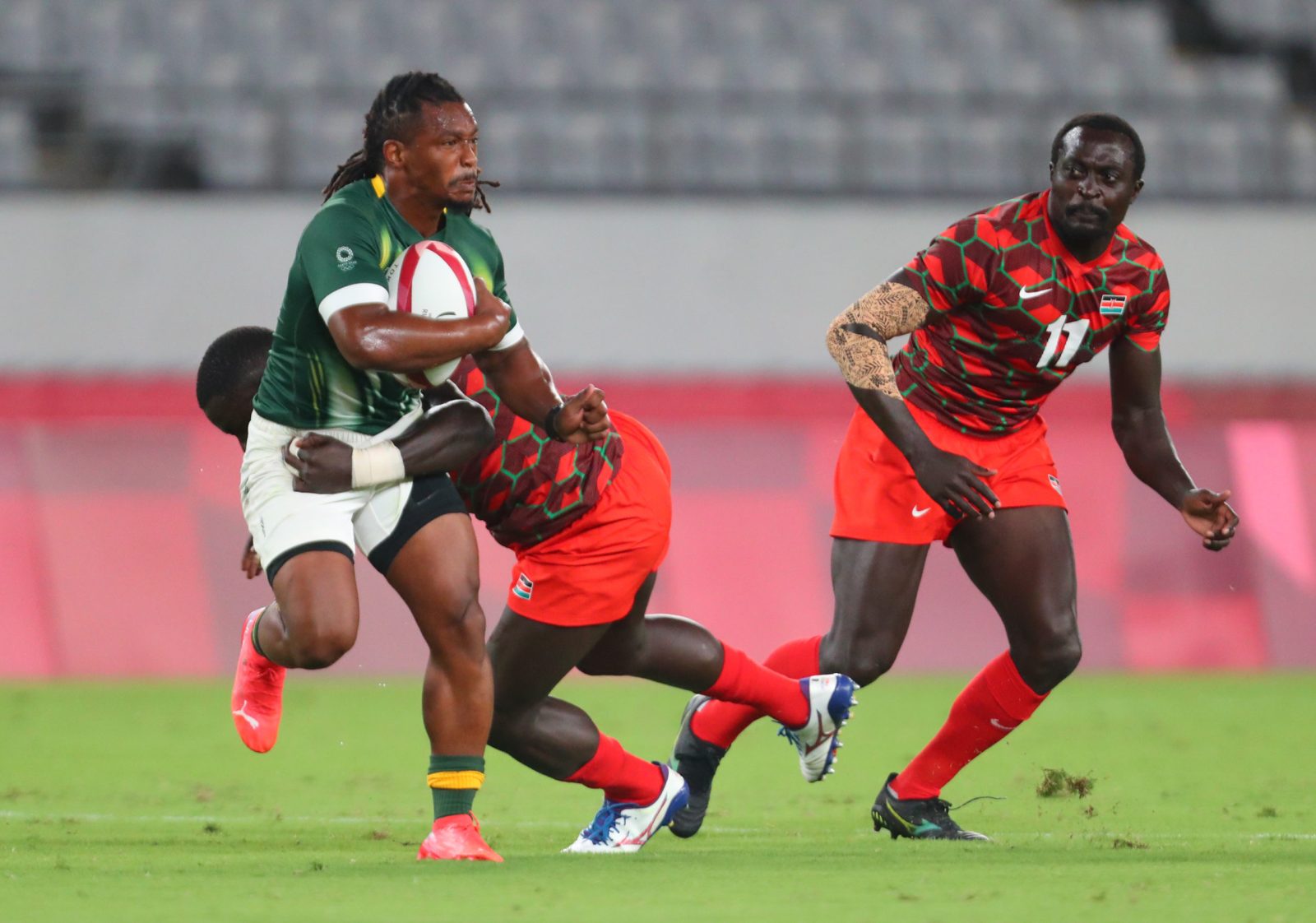 Branco du Preez of South Africa during the Rugby Sevens match between South Africa and Kenya on Day 3 of the Tokyo 2020 Olympic Games at Tokyo Stadium on July 26, 2021 in Tokyo, Japan. (Photo by Roger Sedres/Gallo Images)

Despite facing Covid-19-induced challenges before the start of the sevens tournament at the Olympics, the Blitzboks started off their bid for gold in the most ideal manner, picking up two wins from two games in Pool C.

The Blitzboks earned their second win in two games in the Pool stage as they bid for gold at the Rugby Sevens tournament of the Tokyo Olympics. The Boks edged Kenya 14-5 in a tense and tough encounter on Monday afternoon. Earlier on Monday morning, they had outclassed Ireland 33-14.

South Africa’s stand-in coach Renfred Dazel said their objectives for the opening day had been achieved.

“We finished the day with two wins out of two and although the win over Kenya was a scrappy affair, we will take it and move on to day two,” said Dazel. “We have not played at this level for quite some time now, so the guys did well considering the circumstances we found ourselves in.”

South Africa’s most capped player, Branco du Preez, was pleased with making his Olympic debut. Although he rightfully lamented their display against Kenya, particularly in the second half.

“It was a great feeling running out, but it is all about the team effort in the end,” said Du Preez.

“We played well against Ireland, but it was not our best effort against Kenya. We could not hold on to the ball and became involved in a dog fight with them. We are certainly better than that, but we are happy with two wins.”

The South Africans will now clash with the USA on Tuesday morning (4:30 SA time) to determine who will qualify for the last eight as the leader of the pack.

The winner of the battle will tackle the runner-up in a tight Pool A, which consists of New Zealand, who are favourites to finish first, as well as Australia, Argentina and South Korea.

Despite almost stuttering against Kenya, the Blitzboks will be happy with the perfect start to the three-day tournament.

In the weeks leading up to the tournament, their preparations were curtailed by coach Powell testing positive for Covid-19 and being forced into isolation for what will be the duration of the tour sevens’ tournament.

In Addition to the loss of Powell, the South Africans had to be separated into two groups, which further disrupted their plans.

Five South African players who were close contacts of Powell after travelling with him from the side’s pre-Games training base were told they cannot stay with the rest of the squad at the Olympic village, due to fears that despite their negative results, they might be incubating the virus.

“We are as well prepared as we could be, despite all the circumstances since we arrived in Japan,” said Dazel prior to their tournament kicking off. “We had limited sessions on the field, only managing two sessions in Kagoshima and two here in Tokyo, but we did good work in our virtual sessions as well.”

According to Blitzbok captain Soyizwapi, if South Africa is to do better than the bronze medal won at the Rio Olympics five years ago, they must be mentally prepared for whatever is thrown their way.

“As I said to the boys, they’ll keep coming — the challenges won’t stop. Tomorrow we await another one… The one thing we are focusing on is unity, even if we don’t stay in the same village or in the same hotel — it doesn’t matter. If we stay unified, we’ll be ready,” Soyizwapi said prior to Monday’s double triumph.

“Another thing I mentioned is that if we couldn’t overcome… or if we would’ve been broken [by the setbacks], that would’ve happened by now. So, that’s how mentally strong these guys are — my brothers, my teammates.” DM