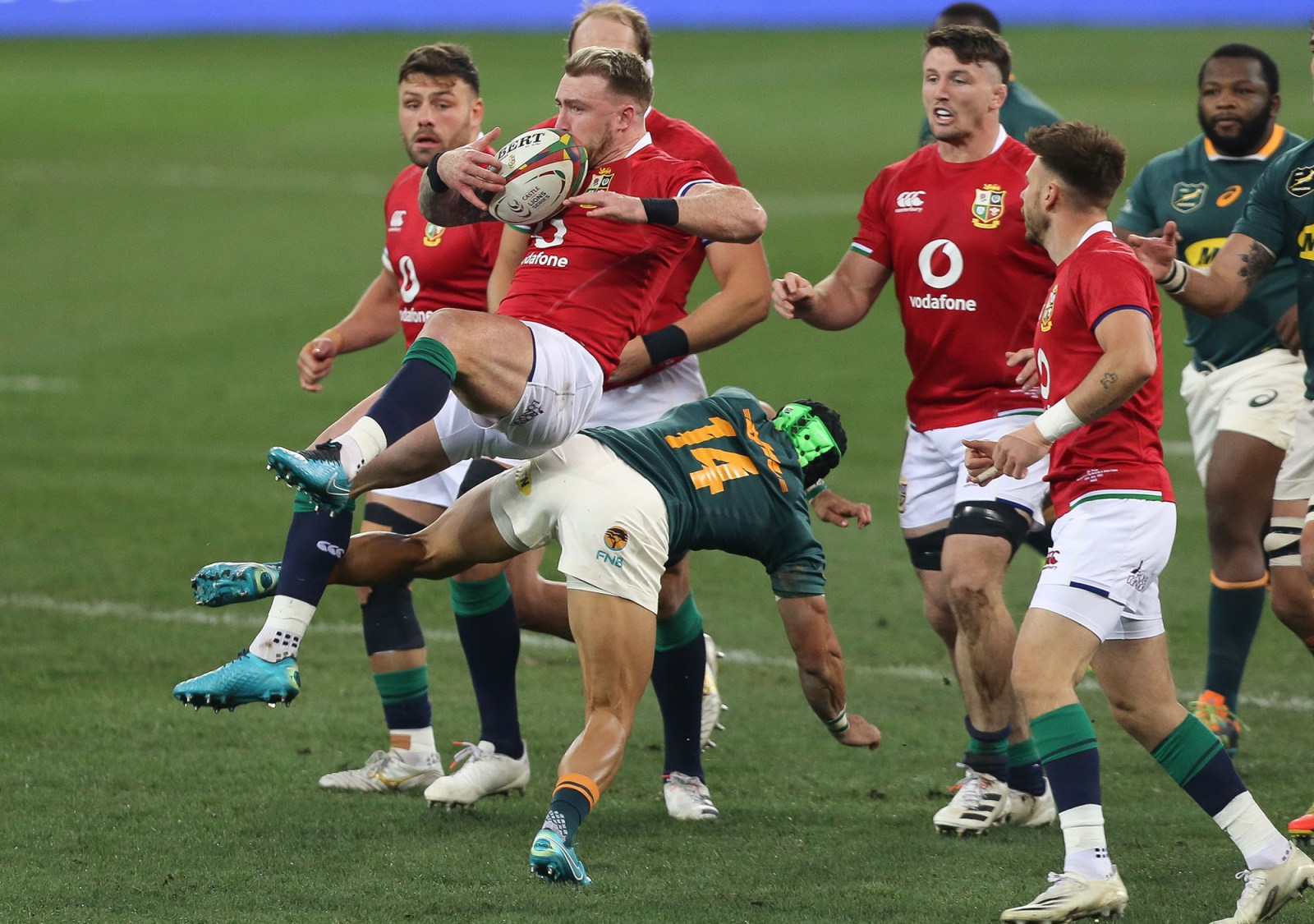 Stuart Hogg of the British & Irish Lions and Cheslin Kolbe of the Springboks compete for the ball during the Castle Lager Lions Series 1st Test at Cape Town Stadium on 24 July 2021. (Photo: EJ Langner / Gallo Images)

Only twice since World War 2 has the team winning the first Test of a series involving the British & Irish Lions gone on to lose the series.

If the past 18 months have shown anything, it’s that nothing comes easy in South Africa. For many people a cooked meal or a stable job is a rare thing. It’s a country of unimaginable suffering and incredible joy. The Springboks won’t have to look far for inspiration as their biggest challenge since the World Cup Final looms in the second Test against the British & Irish Lions after the 22-17 first Test defeat.

The Springboks of Siya Kolisi and Rassie Erasmus, of Jacques Nienaber and Handré Pollard, have made history in the past three years, and they will need to again after a major setback in losing the opening Test against the British & Irish Lions.

Since Erasmus and Nienaber took over as Bok mentors in 2018 under the hats of director of rugby and defence coach respectively, and since Kolisi and Pollard were named captain and vice-captain, a lot of good things have happened.

They also became the first of the southern hemisphere giants to win the Rugby Championship, or its predecessor the Tri-Nations and the World Cup in the same year. None of those triumphs and successes came without a little failure along the way.

The Boks lost their opening game of RWC 2019 against the All Blacks and then steamrolled their way to the title. They will have to do a similar resurrection against the Lions in the coming two weeks because history shows that the team winning the first Test of a Lions series almost never loses the series from there.

In fact, it’s only happened twice since World War 2 that the team winning the first Test has gone on to lose the series — both times it featured Australia and the Lions.

In 1989 the Wallabies won the opening Test and then dropped the next two. In 2001 it was the Lions that won the first Test against Australia, who were the reigning world champions at the time, before losing the next two. That’s it. The Boks will have to make another piece of history to come back now.

Winning the series is still doable, but it has to be achieved the hard way now. However, Nienaber and his team cannot focus on that outcome. First things first. They have to win the second Test to stay alive in the series and to do that they will have to improve significantly.

The Boks were in command in the first half as the 12-3 halftime scoreline suggested. In fact, that score was perhaps a little flattering to the tourists. The Boks won all the skirmishes and key battle areas in the opening stanza and had this been the well-oiled machine that operated in the World Cup, instead of a misfiring Covid-affected group, they should have pulled away after halftime.

Kolisi’s men looked comfortable and were holding the Lions at arm’s length, but the momentum shifted after the break.

A team as good as the Lions didn’t need a second chance to gain a foothold in the game. South Africa’s drop in performance after halftime, coupled with the Lions raising their intensity and some dubious calls from the officials against the home team, saw the Lions claw ahead for the first time with 17 minutes to play.

The Bok bench, the “bomb squad” as they were christened during RWC, was ineffectual and anonymous. Instead of improving performance, the players introduced seemed to drag it down.

That started with the premeditated plan of changing the entire front row at halftime. Ox Nche, Bongi Mbonambi and Trevor Nyakane were rock-solid and ensured the Boks edged the first-half scrums. Both props were prominent in the loose and Nyakane won one crucial penalty at the breakdown.

Mbonambi was busy and robust as he always is. Those three, more than anyone, gave the Boks go forward and momentum. Nienaber chose to introduce Steven Kitshoff, Malcolm Marx and Frans Malherbe at halftime.

Nche was left to deny it was not a premeditated act after the match, but no one was buying it. Nienaber had spoken in the week of each front row being a unit and it was clear he swapped one unit for another.

The reasoning was probably sound. Given Covid disruptions that plagued the build-up and cost both sets of front rows valuable training time, the Boks coach believed that a massive 40 minutes from each front row unit would get the job done.

But sometimes decisions cannot be so predetermined, as Nche, Mbonambi and Nyakane had done enough to warrant at least another 10 minutes to keep making inroads. They were buoyed by their performances and mentally they must have been on a high.

Instead, the Boks stuck to Plan A, and strangely, Kitshoff, Marx and Malherbe were poor. They are world-class players, but they started slowly and seemed to lose confidence quickly.

The Boks immediately conceded a scrum penalty when the new front row packed down for the first time. From the ensuing penalty to touch and lineout, the Lions scored a rolling maul try via Luke Cowan-Dickie to close the gap to two points with barely three minutes of the second half gone. The Boks’ momentum hit a wall and they never recovered.

South Africa were forced deeper and to make more tackles. They lost the aerial battle after halftime and started losing breakdowns. They conceded seven consecutive penalties after halftime, which gave the Lions all the momentum they needed.

“The try from the maul was pretty important, then the scrums started to stabilise and we got a bit of dominance there,” Lions coach Warren Gatland said.

“Once we started to take it through some phases, particularly when we got on the front foot, they conceded a number of penalties. It was a really tough, tight Test match. The bounce of the ball and a couple of tight calls might have affected the result.

“We got stronger and stronger,” he said. “I thought the last few minutes were excellent.”

Although Lions flank Hamish Watson should have been yellow-carded for a tip tackle on Willie le Roux, the Boks were second-best throughout the second half.

They clearly lacked stamina, which is understandable after a dozen players were isolated due to Covid in the build-up. South Africa will be in better shape for the second Test, but the reality is that they are still some way off their best and time is against them.

There is no way that they will magically reach peak physical condition in a week, so Nienaber’s focus will have to be on tactical and mental adjustments. The Boks have to find a way to outsmart and outthink the Lions.

The world champions are hurting and have to respond. They are at their most dangerous when they are in this position. The Lions know what is coming.

In 2009 the second Test was brutal and brilliant. Four Lions players and two Springboks ended up in hospital as the Boks clinched the series. And that was after the Boks had won the first Test.

As Eddie Jones pointed out after his Japan side famously beat the Springboks at RWC 2015. “The Boks play Samoa next. You’ll want to get tickets for that match fellas, cos it will be a real bash ’em up festival.”

One thing as certain as death and taxes is that the second Test is going to be painful. A bash ’em up festival for sure. DM