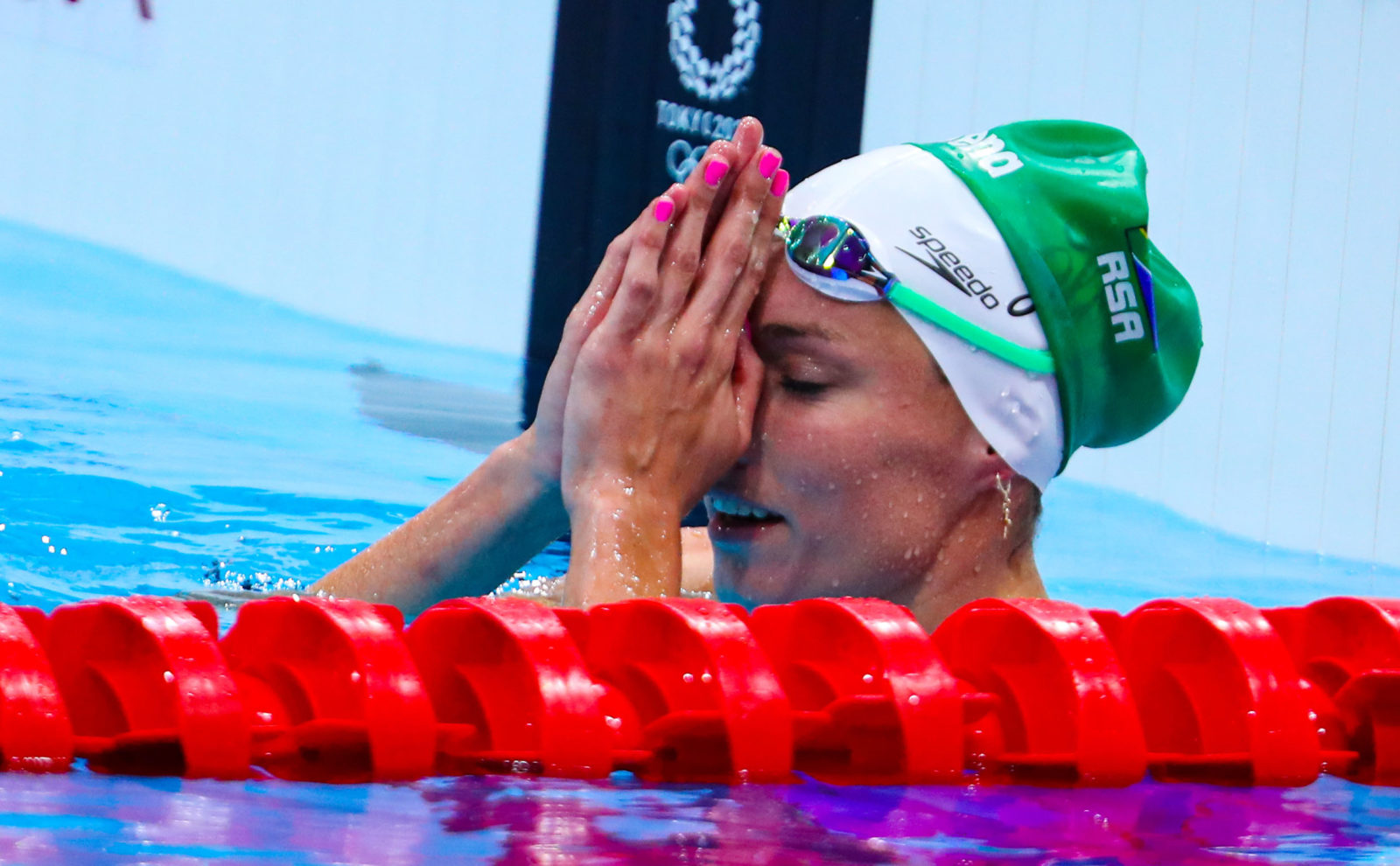 South Africa’s Tatjana Schoenmaker was the talk of the swimming pool after she set an Olympic record of 1:04.82 in her heat of the women’s 100m breaststroke on Sunday.

All week Tatjana Schoenmaker had been trying to make the world believe that “what would be, would be”. She was playing down the fact that she was favourite for the women’s 200m breaststroke gold at the Tokyo 2020 Olympics.

She was prepared to tell the world that she was “happy” that the 100m breaststroke event would come before in the swimming schedule.

“I’m excited about the 100, because it allows me to get a feel of the water. It can help me break the ice a little … I’m nervous and excited, I’m looking forward to the 200. The goal, though, is always to do well in both, but the 200 is my better event.”

Schoenmaker also told the world that she’d “be happy” with whatever her fate is at these Games. “If I win a medal then I’d be very happy, but if I don’t then I’ll still be happy with the fact I got to experience the Olympic Games and gave it my best.”

Here’s the thing: Schoenmaker’s best is so much better than anyone else’s.

Throughout the entire build-up to Tokyo all the talk in the 100m has been about the American Lilly King. In fact, USA Today was one of the global publications who nailed her to the mast as the “banker” of these 2020 Games in the pool.

They noted that the 24-year-old Olympic champion had not lost a 100m breaststroke race since 2015 – and counting.

Well, in Tokyo she extended her winning streak, getting to the wall first in heat six in 1:05.55. But, just a few minutes earlier Schoenmaker had upstaged her. She touched the wall in lane five in heat five, looked at the scoreboard and threw her hands up into the air. Then she let out that flashing smile, or was it a laugh?

The scoreboard showed 1:04.82, taking 0.11 seconds off King’s Olympic record set in Rio in 2016. The American might be unbeaten in six years but she’s got a fight on her hands here, and it is worth remembering that she holds the world record at 1:04.13.

So, she has proven she can go that low, but she will have gone to bed with the vision of Schoenmaker’s green Team SA cap and long, loose athletic levers at the front of her mind.

We need to be reminded that this was the heats, and there are still Monday’s semi-final followed by Tuesday’s final to come. King, and possibly another American in Lydia Jacoby, still have some say in the matter.

But, going back to when she won the 100/200m double at the 2018 Commonwealth Games, the Tokyo 2020 Olympics have loomed as a possible Tatjana Schoenmaker show.

The fact that it’s being held a year later than scheduled suits the South African even more, given she is now ranked No 1 in the world in the 200m and only a few weeks ago turned 24 herself.

It is a reminder of Atlanta 1996. Then, American teenager Amanda Beard was being touted as a potential double breaststroke gold medallist. Up until that stage no woman had done the breaststroke double. Then South Africa’s Penny Heyns stepped on the blocks.

The die was cast. You can’t put down more of a marker than that. She continued the momentum, and went on to win double gold, with Beard taking silver on both occasions.

Is history repeating 26 years later? Both Heyns and Schoenmaker have an unshakeable Christian faith. Both live in Pretoria. Both are humble, genuine and good people. But both are steely competitors and despite neither of them being prone to shouting from the rooftops, they were/are comfortable in their ability to get the job done.

It could well be that from a psychological point of view that Schoenmaker’s Olympic record in the 100m has broken King’s resolve. Should she again post a quicker time in the semi-finals, it would be lane for her in the final, with King in lane five.

Schoenmaker this week played down the importance of a lane, but in the world of swimming lane four is reserved for the fastest qualifier. In itself, it sends out the strongest signal. DM