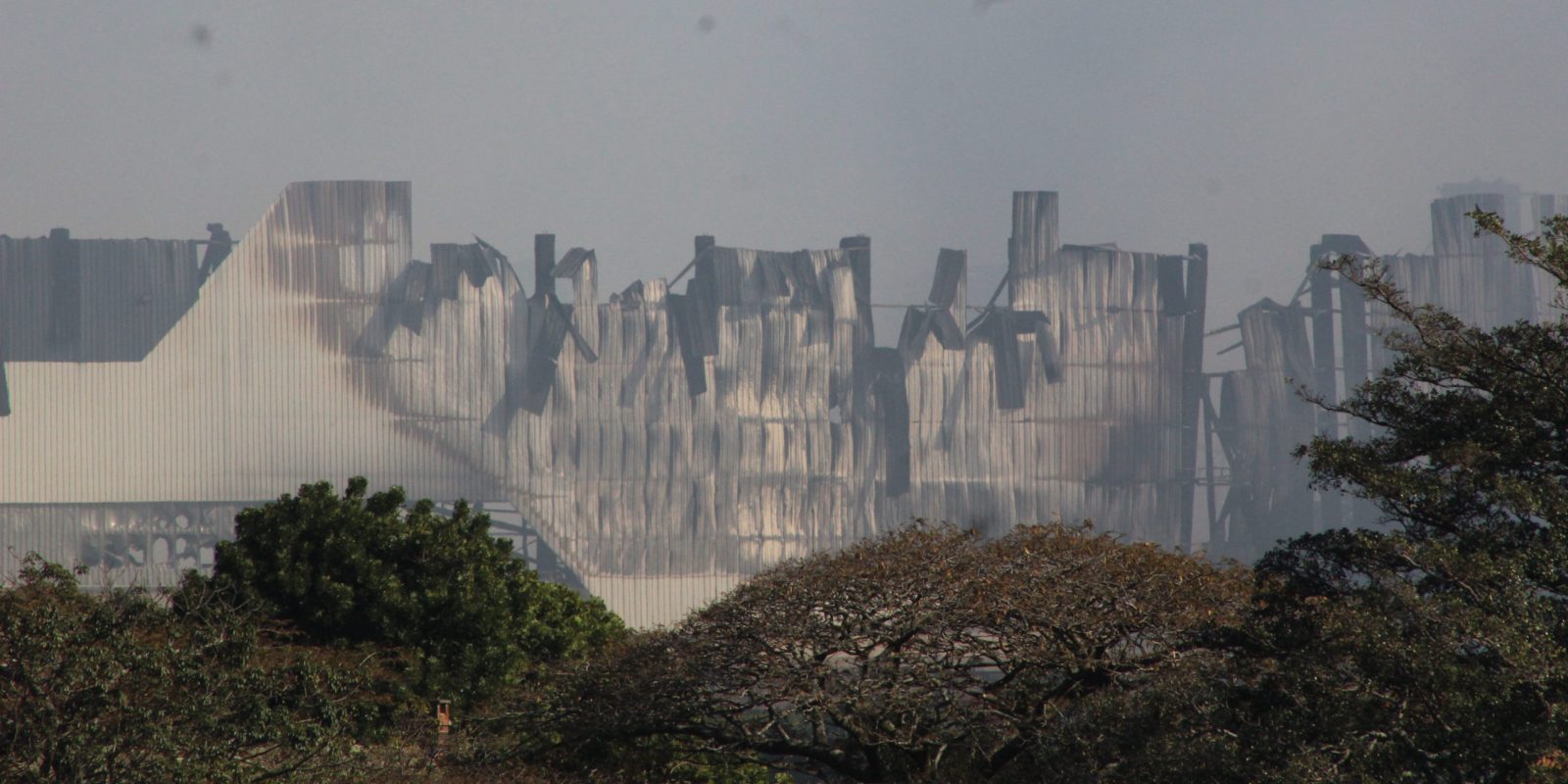 Smoke and fumes pouring from the gutted remnants of the UPL pesticide warehouse in Cornubia, Durban. (Photo: Tony Carnie)

A fire at a chemicals warehouse during the recent unrest and the delay of authorities in announcing precautionary health measures have stirred up a hornet’s nest around health risks to neighbouring communities.

Chemical explosions and accidents are often associated with remote, low-income or heavily industrialised areas. Faraway places such as Bhopal in India, or the Seveso chemical plant in Italy.

But over the past 10 days or so, the sudden, indiscriminate and potentially deadly risks of such accidents were plain to see much closer to home, as dark clouds of toxic fumes passed unchecked through the front doors and windows of thousands of houses in northern Durban – rich homes, poor homes and middle-income homes. Umhlanga, Mount Edgecombe, Cornubia, Blackburn, Waterloo, Sunningdale and Prestondale, to name just a few.

Large volumes of bright blue, contaminated water also poured into a nearby stream and river, eventually flowing out to sea from the Umhlanga Lagoon, forcing the city to ban swimming and the collection of a wide variety of fish, crayfish and other estuarine and marine creatures that were killed by the poisonous waterborne plume.

Notwithstanding evidence that the new United Phosphorus Limited (UPL) pesticide and agrochemical products warehouse in Cornubia appears to have been torched deliberately at the height of the violence and looting spree in KwaZulu-Natal and Gauteng, tough questions will no doubt be posed shortly to the Mumbai-based agrochemical giant; the property managers and landlords who leased the warehouse to them, as well as the regulatory authorities who approved the storage, pollution control and emergency plans.

Questions include whether the new warehouse was ever classified as a Major Hazard Installation and about the apparent absence or failure of measures to prevent large volumes of contaminated water pouring out into the surrounding environment and the sea.

While no people appear to have died as a result of the explosion, the airborne release of a large but as yet undisclosed quantity of poisonous chemicals has sparked concern around the potential health impacts for residents whose lungs and bloodstreams were exposed to a toxic cocktail of airborne fumes and tiny particles of chemically contaminated soot.

Earlier this week, the company refused to release a full list of the chemicals stored at its brand-new storage warehouse in the mixed-use (residential, retail and light-industrial) Cornubia development. According to the company, “Releasing the full list of products stored at the warehouse will not make it any clearer to the public what has actually been released into the environment; what they may have actually inhaled, given numerous other fires in the area, or the levels of exposure or risks. It may instead create unnecessary anxiety.”

Yet, according to a list of products marketed online by UPL’s South Africa division, the company sells a wide variety of agrochemicals, including several that are toxic to people, animals, fish and other life forms.

Glyphosate, for example, is a herbicide that has been classified as a probable human cancer-causing agent by the International Agency for Research on Cancer (IARC), the expert body that provides advice to the World Health Organization. Other chemical formulations marketed by UPL include 2,4-D (classified by the IARC as possibly carcinogenic to humans); while chlorpyrifos has been recommended for further expert evaluation based on three previous studies in the United States that suggested an increased risk of breast cancer in women and another study that showed a significantly increased risk of prostate cancer among chlorpyrifos workers with a family history of this cancer.

There was anger, too, about the failures or lengthy delays by the company, city and national government health and environmental authorities to provide timeous advice to potentially vulnerable groups such as young children, pregnant mothers, the elderly or people with asthma or heart conditions.

On 17 July, almost five days after the fire began, UPL issued a statement on its website, saying that: “Experts have advised that, as a precautionary measure, people should remain inside if they’re in the area of a smoke cloud. People are also advised to cover their eyes and nose by wearing an ordinary mask and glasses over their eyes.”

On 19 July, with the airborne chemical fumes still spreading into residential areas, the company issued a further bulletin, stating that it had received expert advice that there was “minimal risk of any long-term effects to the health of people exposed to smoke from the warehouse”.

However, it added: “As a precaution, residents who are in contact with the smoke cloud are advised to wear double Covid-19-type surgical or soft cotton masks, of which the outer layer is kept slightly moist to trap particles and fumes.”

The national Department of Health appears to have said nothing, despite requests for a public statement, while Barbara Creecy, the Minister of Forestry, Fisheries and the Environment, announced on 21 July that she was sending a team of experts to Durban to assess the situation and lend support.

The team would include technical experts familiar with aquatic systems, epidemiology (health risk assessment), enforcement in waste and pollution issues, and marine compliance.

Though Creecy indicated that there was a joint operations team in place that was “working with the team of specialists appointed by UPL to understand the extent of the impacts”, there was no indication that the government had appointed its own team of experts at its own cost, to assess or evaluate the situation independently of UPL-appointed consultants.

Rico Euripidou, a health campaigner and epidemiologist with the groundWork environmental watchdog group, was one of several groups to criticise the company and government authorities for their handling of the accident. Alarmed by the delay by authorities to announce precautionary health advice, Euripidou and University of KwaZulu-Natal occupational and environmental health head Prof Rajen Naidoo took the unusual step of issuing an “unofficial public health warning” on 21 July to affected communities.

They suggested that: “As far as is possible, stay indoors as much as you can, with windows closed, particularly if your home is in the direction of the chemical plume. If you, your child or elderly people with chronic chest and heart disease live in the area of the smoke, and it is at all possible to stay with relatives outside the area for the next few days, then it is advisable to do so.”

By then, unfortunately, the toxic air horse had long since bolted from its Cornubia stable and had been swirling through countless homes for several days – while thousands of fish and other creatures were long since dead. DM168