Cricket SA’s hearings on racism not that black and wh...

Cricket SA’s hearings on racism not that black and white, but they do offer hope of transformation 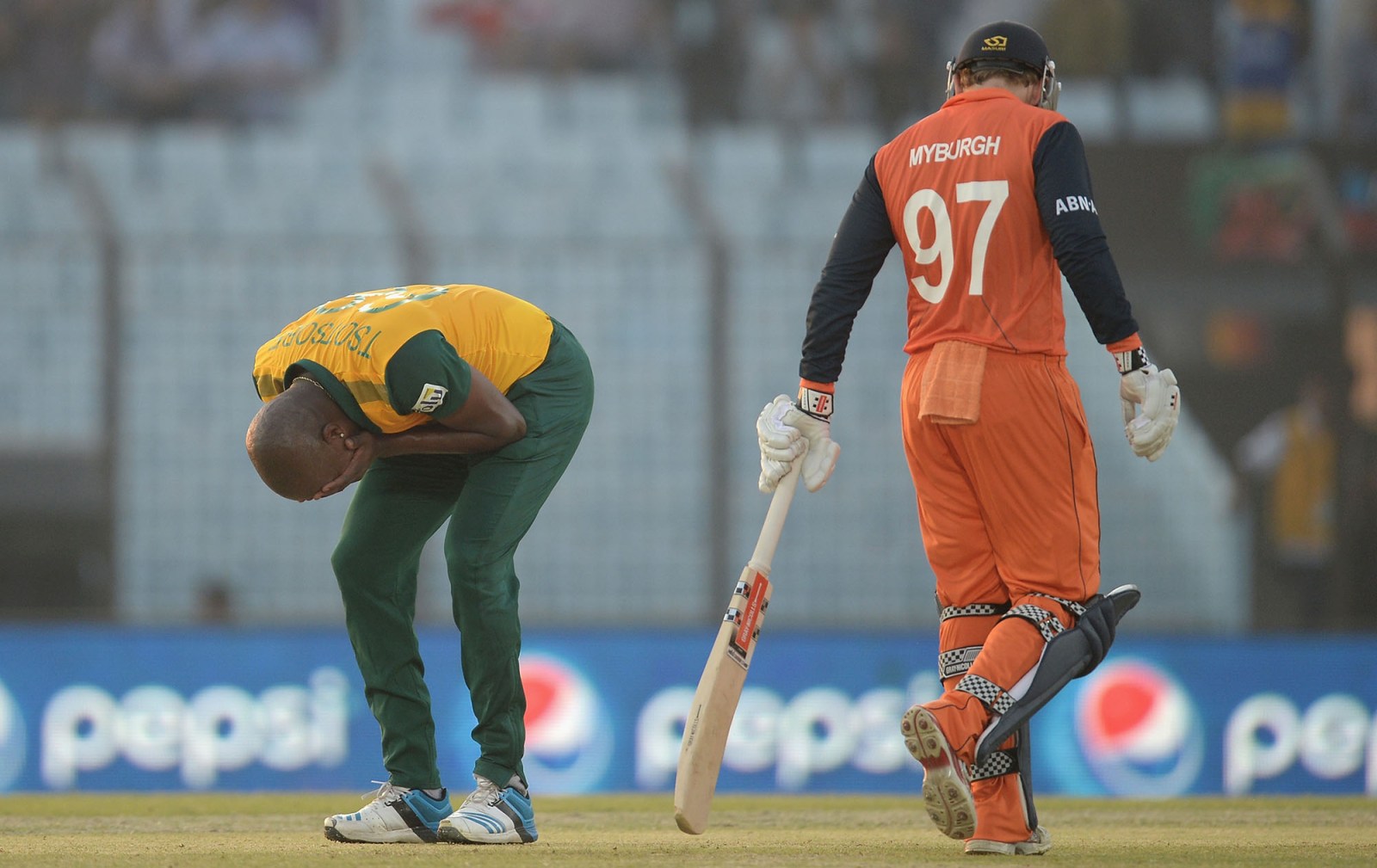 Lonwabo Tsotsobe of South Africa reacts after being hit for six runs by Stephan Myburgh of the Netherlands during the ICC World Twenty20 Bangladesh 2014 Group 1 match between South Africa and the Netherlands at Zahur Ahmed Chowdhury Stadium on 27 March 2014 in Chittagong, Bangladesh. (Photo: Gareth Copley / Getty Images)

The Social Justice and Nation-Building hearings into cricket have delivered sobering testimony for wronged players – and become a platform for some to attempt to sanitise their roles in match-fixing.

If you are white in South Africa, you cannot know what it is to be black. If you are black, you have no choice but to know what it is to be white: whiteness, like air, is all around. Power comes not from having the vote, nor from fairer legislation, but from money. And, unless it is stolen, money doesn’t move without the will of those who have it.

So there are reasons beyond the realm of sport for white people to watch, online, the hearings of Cricket South Africa’s (CSA’s) Social Justice and Nation-Building (SJN) project. For once, white noses are pushed against the window looking into a scene they thought they were part of but from which they have, for now, been excluded: all the testimony since the hearings started on 5 July has come from black witnesses.

It isn’t often that white people are reduced to one option, and rarer still that that option is only to listen. Welcome, white people, to a sliver of how it feels to be black in a world you thought was yours.

Story after story of pain has tumbled out, often cushioned in tears. Playing cricket while black in South Africa remains an invitation to injuries of the soul.

That the SJN’s terms of reference are limited to instances of racism since cricket was supposedly unified – in racial terms – in 1991, only adds to the shock. But then, see paragraph one above. There really can be no normal sport in a society as abnormal as ours.

Omar Henry spoke of being shunned in all segments of the cruel, crazy kaleidoscope of the official apartheid era. For daring to watch cricket at Kingsmead, then a white ground, he was banned for life from the game’s coloured structures.

Thus forced to play for a white club to continue his career, he was branded a sellout by his community. Not just the only player of colour in South Africa’s squad for the 1992 World Cup in Australia and New Zealand, but also the only frontline spinner, he was selected for just one game in the tournament.

He had to be persuaded by the president of the then United Cricket Board, Krish Mackerdhuj, not to go home.

But not all of the testimony has been as dignified and respectful as Henry’s. Again, see paragraph one above. To maintain the lie of white supremacy, racism has to destroy integrity – including that of its victims.

There is more than enough solid evidence of racism in post-apartheid cricket to merit the SJN. But truth is slippery, nuanced and, therefore, inconvenient to those who want to hijack the process to sanitise their own sins.

Henry came to the SJN with admirable intentions, but Lonwabo Tsotsobe, Alviro Petersen and Ethy Mbhalati – who were among the seven players who admitted their guilt in the 2015 match-fixing probe and were banned for various periods – have used their testimony to push for the investigation to be revisited. Tsotsobe left no room for doubt.

When recounting his experiences of racism, he said: “I’m just going to quickly mention them before I get to the main, main match-fixing part.”

And that was a pity, because he had an important story to tell: “I’ve been called a quota, quota, quota all my cricketing life. But a quota who became No 1 in the world.”

Tsotsobe was indeed the top-ranked ODI bowler in 2012. “You don’t just get put into the No 1 position because you are black. You get put there because of your performances.”

Yet Tsotsobe was never afforded the respect he earned. Instead, he was damned as lazy, unfit and uncommitted, more interested in cars and clothes than in training.

What does that have to do with falling victim to fixing? If you go far enough down the rabbit hole of reasoning for why Hansie Cronjé ended up in the same dark place, you will find the theory that he lost confidence in South African cricket after it was made clear to him that transformation targets would become part of his reality as national captain.

So, he thought (if you believe this version), why not make some money from what he considered a farce?

Might what was apparently good for Cronjé have been good, conversely, for Tsotsobe? Certainly, he seems to have latched on to conveniently facilitating narratives.

For instance, the Test career of a clapped-out, spent, way-past-his-best Makhaya Ntini was “cut short” in December 2009 “to make sure he doesn’t go past” Shaun Pollock’s then South Africa record of 421 wickets.

Stranger still was Tsotsobe’s assertion that the implicating of Tsolekile, Petersen, Mbhalati and himself in the fixing scandal was racially driven: “Was it a tactic to try to lure black African cricketers? … Is it a coincidence that all the four black players that are currently doing well are all involved in match-fixing?”

Hang on: two of the convicted are black and the other is white.

But Tsotsobe deserved to be heard. “These guys don’t understand what they do to us,” he said through enough tears to prompt an adjournment.

When Dumisa Ntsebeza, the SJN ombud, restarted proceedings, Tsotsobe continued: “What I wanted to say, Mr Chair, was that these guys don’t understand the situations that they put us through. I’ve lost my livelihood. I’ve lost everything. At one stage I was so depressed that I [asked] myself why I should be in this world. Because I’ve got nothing.

“If it wasn’t for my mom you would be talking to somebody else.”

That brought to mind Eugenia Kula-Ameyaw, who did indeed sit on CSA’s board. The only positive impact she made, before she was pushed to resign in November along with the rest of that deeply damaged structure, was to establish the SJN.

But she squandered that nugget of goodness when she appeared as the first witness and lurched into a rant filled with untruths and shot through with her clumsy binary agenda.

Black players have been selected in national squads only to sit on the bench throughout tours and tournaments, and so are paid far less than those who earn more in match fees – who have tended to be white.

But, in Kula-Ameyaw’s Trumpian bombast, black players are paid less because they are black.

What has happened at the SJN is akin to what KwaZulu-Natal and Gauteng endured recently, when unrest that started with the poor looting food and toilet paper morphed into the destruction of infrastructure. Kula-Ameyaw loomed like a spectre from the Zuma years to remind us how bad the situation was not long ago.

Her sorry, damaging ilk have been rendered irrelevant in cricket. But whiteness is still all around, including in the game. The SJN, though imperfect and subverted, is all there is to try to change that. It still holds hope. DM168