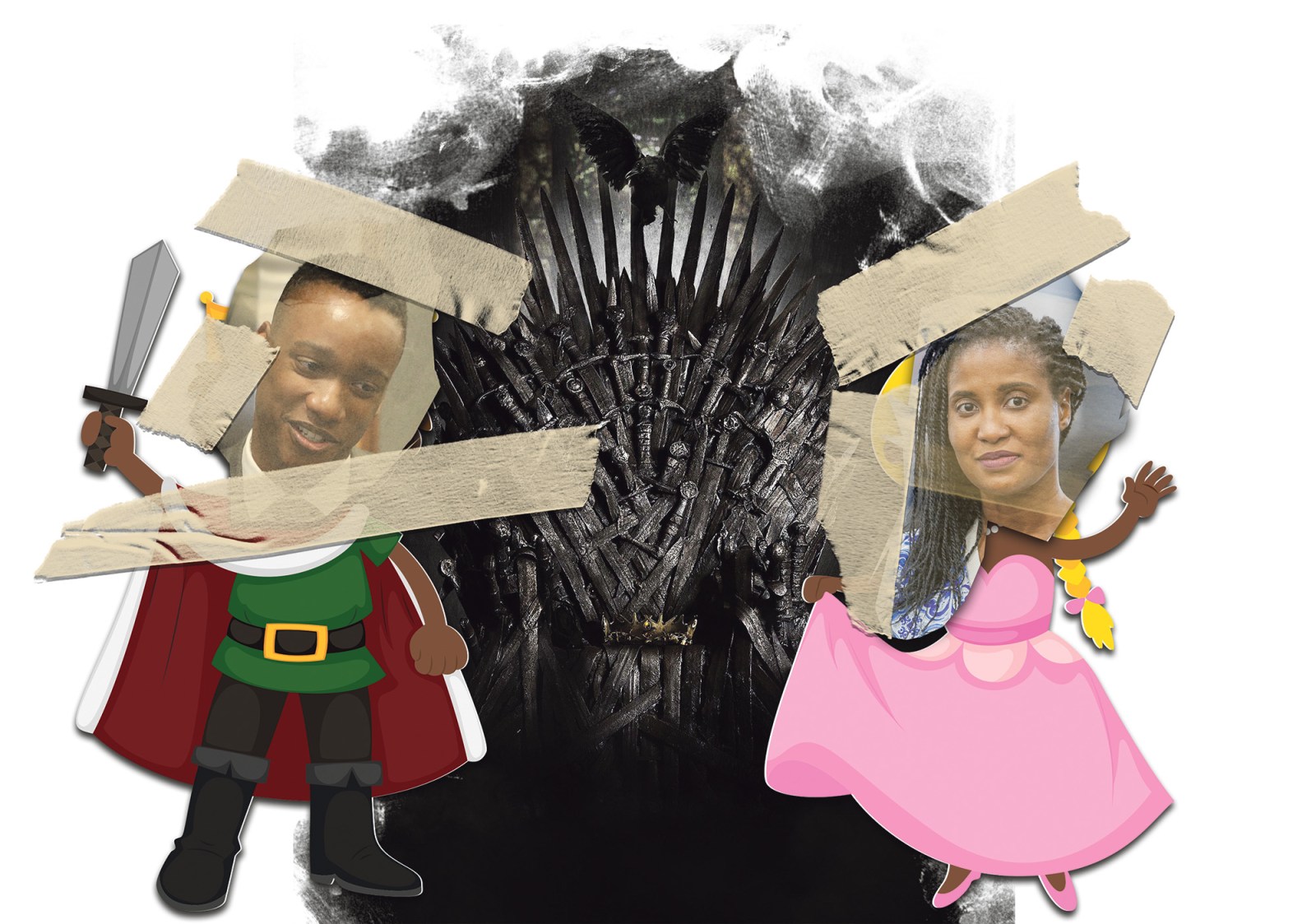 The Dudu twins would like to rule all of Westeros.

In one of the great palaces of Westeros, He-Dudu and his royal sister, She-Dudu, strap on their swords and swig from their goblets as they discuss strategy, a nation of lumpens and whether or not to use the tool known as Juju.

Forget about the Real Housewives of Wherever. It’s time for Real Children of Former Presidents (Now in Jail).

I’m seeing Duduzane and Duduzile doing a bit of roleplay, and I’m thinking – the most appropriate option – Game of Thrones.

Dudu and Dudu are in a huge room in the Red Keep. As befits one of the great palaces of Westeros, it is hung with richly worked tapestries, some showing the legendary victories of their ancestors over the evil whitewalkers, and festooned with ancient sculptures and various forms of royal bric-à-brac.

A brazier is burning brightly in the corner. Outside, darkness is falling on the tortured kingdom.

“Okay,” says She-Dudu, looking her twin up and down. “It is time. Where’s your sword, brother?”

“Erm… I think I left it in the man cave. Or maybe the dungeon.” He-Dudu frowns. “I took it off because I kept tripping over it.”

“Oh, man,” says She-Dudu, rolling her large expressive eyes, “you’ve got to live this thing or it’s not going to work.”

“Stop telling me what to do.”

“Listen, we’ll worry about the sword later. You’ve got your fancy armour on, that’s enough… This is just a strategy session, really.”

“Okay…” Dudu looks worried. He perches himself on the edge of a beautiful Roman-style medieval chair.

His sister stands up, sweeping her auburn tresses aside and taking a quick swig of wine from her goblet. She smooths the folds of her sumptuous purple gown, embroidered in gold and silver.

“Now,” she says, “think of a map. East coast – well, we can have that burning in no time. Gauteng is a little harder.”

“Well, obviously, we’ve got to mobilise the lumpens. And you know that takes a while because they’re urbanised and less susceptible to the call of ethnic loyalties.”

“Ssssh! Don’t mention the Z-word. We’ve got to pretend this is all about uBaba, I mean Lord Tywin Lannister, our revered warrior and Big Daddy Number One.”

“Royal Sister to you.”

“Okay, so we send out our provocateurs, tell the people it’s a day for free shopping, they can help themselves to anything they like – flat-screen TVs, fridges… And then they can burn everything down, just for fun.”

“Yes,” said his sister, with a show of forbearance. “I know. That’s why I’m tweeting every half-hour, on the half-hour: ‘Burn, baby, burn!’”

“You’ll learn. If you apply yourself, of course. That’s always been your weak point, hasn’t it? Application. And you have to start learning some proper isiZulu, of course.”

“I thought we weren’t supposed to use the Z-word?”

“Good. So, back to where we were – getting the lumpens to burn stuff.”

“It seems like a lot of work, my Royal Sister. Can’t we get the dragon lady? She can fly over and just incinerate everything. She could even incinerate the Union Buildings, hopefully while King Cyril is in there.”

“You fool,” says She-Dudu. “There’s nobody in the Union Buildings. They’re doing everything virtually now. That means on computers. You know about computers, right? They have them in Dubai, I’m sure. And, plus, the dragon lady is our sworn enemy.”

“No, man, Helen Zille is the Red Priestess. The one who can conjure up shadow demons from her nether parts. There isn’t really a dragon lady in real life. There are no dragons.”

“Well, don’t,” says She-Dudu, pouring herself another goblet of red wine. “Focus on our strategy. This is the real Game of Thrones, Dudu! We have a chance to seize the Iron Throne!”

“Can’t you just see me sitting on it?” She-Dudu, who is now seated once more, gazes up at the vaulted ceiling, her auburn tresses falling lusciously around her shoulders.

“When I’m queen of all Westeros, I will be able to hire a whole army of mercenaries to lay the kingdom to waste. I could even have a zombie cyborg bodyguard to kill anyone who annoys me!”

He-Dudu gives his sister a look of something like alarm. “I thought we were in this together,” he says. “Why aren’t I sitting on the Iron Throne? Where am I in this picture?”

“We’re both on the Iron Throne, dammit,” says his sister with a touch of asperity. “We’ll have it made bigger.”

His sister regards him through slitted eyes. “And, pray tell, what exactly do you mean by that, brother?”

He-Dudu smirks. “I’m thinking of your boyfriend Juju. What about when you become officially conjoined as Jujuzile?”

“Ah!” says She-Dudu. “That’s what you’re on about. You’re not very good at sarcasm, or irony, or whatever it is. Subtlety. Another learning ahead, brother.”

She takes a swig from her goblet and her voice sinks to a conspiratorial whisper.

“Well, brother, you see, that’s part of my long-term game plan … which I can’t reveal to you right now. But rest assured that dear Juju, how ever nice we are to him right now, however many ravens with encouraging messages we send to him, won’t get anywhere close to the Iron Throne. He’s just a means to an end, you might say, a tool…”

“No!” cries his sister sharply. “There’s no time for fun right now! We have a war to plan. Not that that’s not fun. But it’s a different kind of fun.”

“Okay,” says He-Dudu. “But do we really have to have a war? It’s so much work. And so messy. Can’t we just get dressed up in our nice royal clothes and stay at home and send tweets to free uBaba, sorry, Lord Tywin, and then he can conquer all of Westeros? After all, Carl Niehaus said –”

“Oh, don’t listen to that eunuch! He’s not as well informed as he thinks he is, despite all his little birds and stuff. And his army is just for show. We’ve got the real army. The lumpens. We’ve just got to get them all riled up. Luckily uBaba impoverished them all so much over the past decade they’re already halfway there.”