Proteas spin Ireland out of T20 series – but Boucher'... 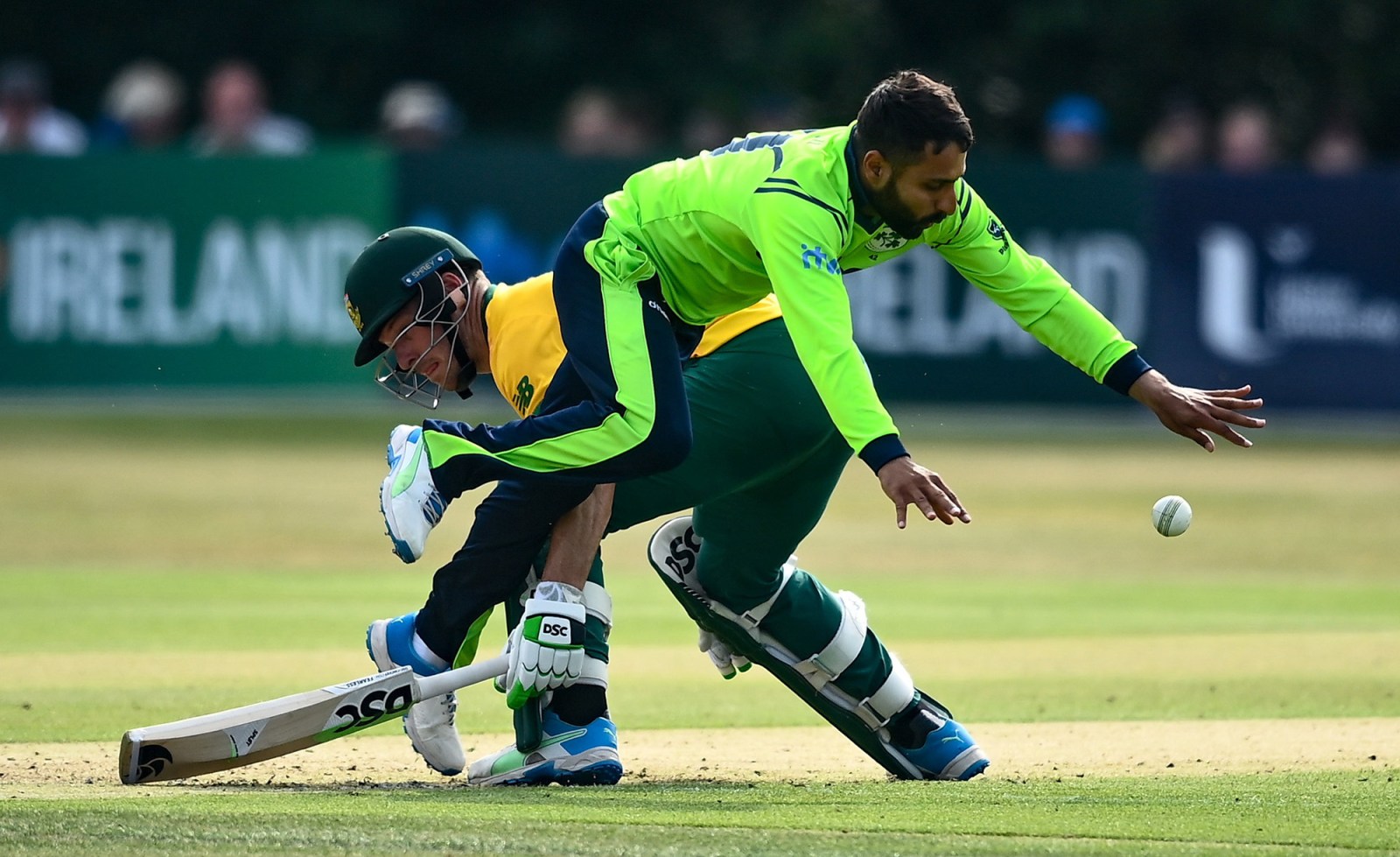 Simi Singh of Ireland collides with David Miller of South Africa during the first T20 International at Stormont in Belfast on 22 July 2021. (Photo: David Fitzgerald/Gallo Images)

Impressive displays from South Africa’s spinners and a dominant showing with the bat by David Miller handed the nation a T20I series victory over Ireland. Back home, Proteas coach Mark Boucher is under the cosh following allegations of racial discrimination at the Justice for Nation-Building hearings which directly implicated him.

Tabraiz Shamsi, known for his magical bowling, and accompanying magic tricks, has been consistency personified for the Proteas in recent matches.

He proved vital once more when he notched up three wickets to help South Africa defeat hosts Ireland by 42 runs in the second of three T20 matches. The victory gives Shamsi and his teammates an unassailable 2-0 lead with one match remaining in the series.

Bjorn Fortuin starred alongside Shamsi as their spin ensured Ireland fell well short of the visitors’ total of 159 for seven in their allotted 20 overs.

During their innings, it had looked like the South Africans would set a paltry total. A top-order collapse left them reeling on 38 for four after seven overs.

After losing their fifth wicket in the form of Rassie van der Dussen, the Proteas looked hapless and hopeless. That is until David Miller stepped up to provide those watching with a dose of “Miller Time”.

Miller smashed an unbeaten 75 off 44 deliveries, including four sixes in the final over, to salvage the Proteas’ ailing innings and ultimately set up victory.

Wiaan Mulder (36 off 26) was the perfect partner for Miller as they put on a 58-run stand for the sixth wicket to help steer the Proteas to a more respectable total.

As for Shamsi, his trio of wickets means he has now taken 14 wickets in seven T20I matches, at an economy rate of 4,32. This is the type of bowling that has seen him soar to the summit of the International Cricket Council’s (ICC) T20I bowling rankings.

But he isn’t blowing his own trumpet, insisting that it is not a case of him playing his best cricket, but playing more regularly. Previously he faced stiff competition from the likes of Imran Tahir.

“I wouldn’t say I am in the form of my life; it’s the first time I have got regular game time. It used to be one game now and another game three months later, and that’s how my career started,” said the left-arm spinner.

“There is no dispute why it was like that. I think with regular game time you get to learn quicker from your mistakes and implement the good stuff a lot more and grow as a player.

“We all know that form is temporary; you just have to keep on working hard in your processes. There will be a patch where things don’t go your way. But it’s about staying positive and through those patches try to contribute. If it’s not with the ball it’s in other ways behind the scenes or in other ways.”

Shamsi can still add to his tally with the Proteas closing off their tour of Ireland on Saturday, 24 July. Mark Boucher’s charges will be eyeing a whitewash over their hosts.

While the Proteas were edging to a series win over Ireland, pressure mounted on coach Boucher after painful testimony of racial discrimination by his former Proteas teammate Paul Adams.

Adams was giving testimony during the ongoing social Justice for Nation-Building (SJN) hearings, headed by advocate Dumisa Ntsebeza.  The hearings aim to determine the causes, nature and extent of racial discrimination and lack of transformation in all South African cricket structures since unification.

Adams, a spinner in his playing days, fingered former Proteas wicketkeeper Boucher as one of the teammates who used to call him “brown shit” during international duty.

“I was called ‘brown shit’, and it often happened in fines meetings after we won a game, and there was a song that was sung: ‘Brown shit in the ring, tra-la-la-la.’ When you are playing for your country, you’re in that [moment of] victory, you don’t make sense of it, you just go along with it, brush it off, but it’s actually blatant racism,” said Adams.

Adams told the commission he had never confronted the Proteas head coach about the name and its meaning.

“I never addressed it with him. Mark was just one of the guys (who called me that)… it only came back to me afterwards. I was caught up in the fun of being along in the team and not (wanting) to ruffle any feathers. For me, when I thought about it, and my wife kept telling me, ‘why do they call you that?’, then I realised it wasn’t right.”

Boucher responded in a statement:

“Due to my commitments as Proteas head coach and the fact that I have been out of the country throughout the SJN hearings‚ I have not been able to follow the testimonies that have been made and am therefore not in a position to comment on issues that have been raised.

“At the moment my full focus and energy is concentrated on the Proteas and the final match of their tour of Ireland tomorrow (Saturday).

“Once I have returned to South Africa I will address any issues that concern me appropriately after I have had the opportunity to get a detailed account of them. Until such time I will be making no comment on the matter.”

Cricket South Africa (CSA) has said it will allow the process to run its course before publicly addressing any revelations that come out of the hearings.

“The ombudsman’s terms of reference adopted by the recently appointed CSA Board ensure that where allegations are made against individuals or organisations, they will be given a proper opportunity to respond to these in due course,” the CSA said in early July.

“This will take place before the ombudsman delivers his report to the CSA Board at the end of September 2021.

“In view of this, the CSA prefers not to comment publicly during the ongoing process of these hearings on the evidence that has and will emerge.” DM