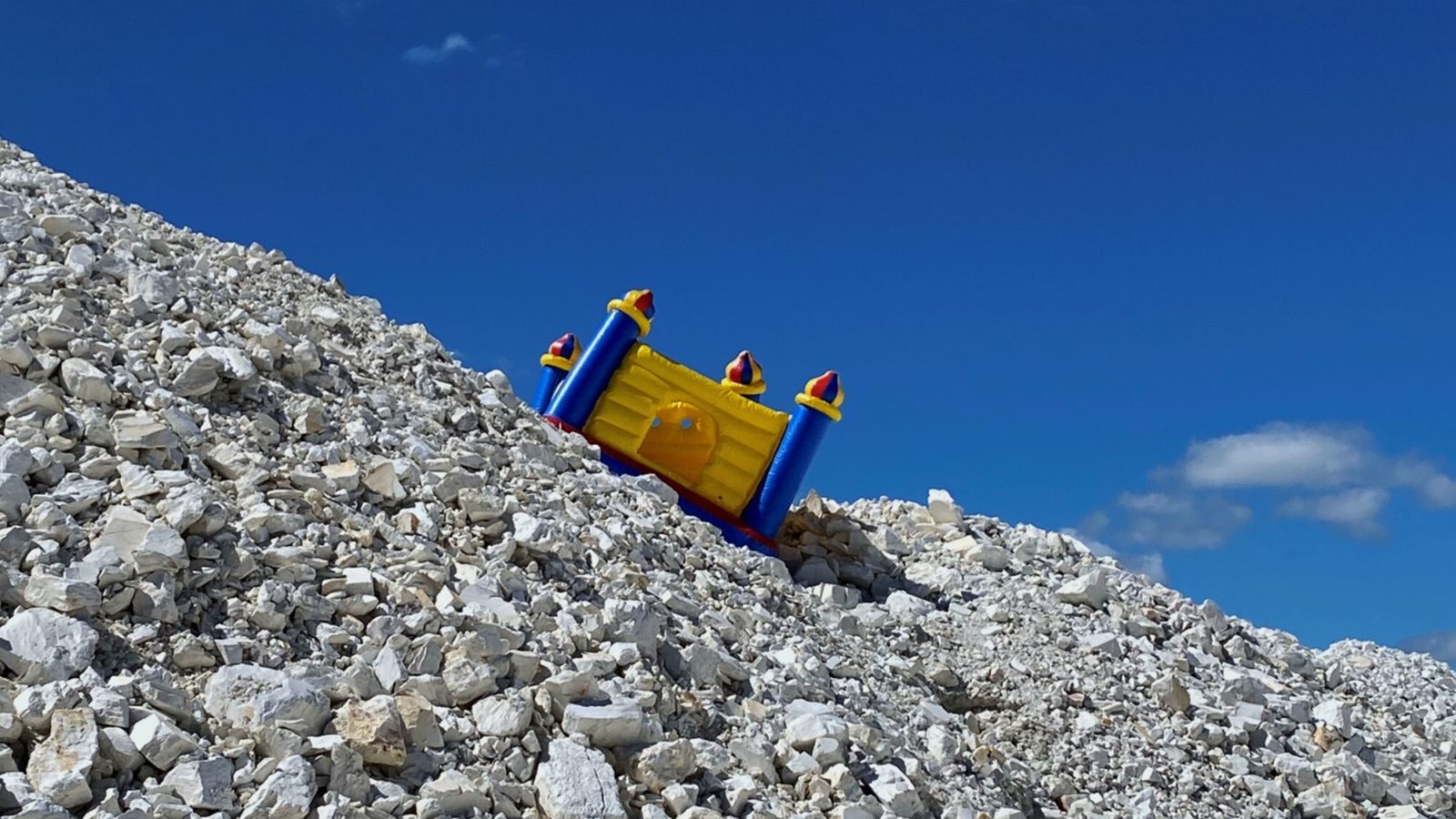 There is only blue sky and ocean, interrupted by the brown rocks and pale sand of the Eastern Cape. Waves swell and break, white sea foam churns.

This story was first published in The Critter.

Then an inflatable castle materialises, rendered in full colour – red, blue, yellow. It’s a child’s castle, a plastic palace that floats and flounders, battered by the wind and the waves before washing ashore.

We watch all of this from various vantage points, gauging its form and intention. What is this drifting metaphor, this blowup Dromedaris that heaves and lurches forward with the tide? There is no one aboard. It is an empty vessel, animated by the ebb and flow of the sea.

Once beached, we consider it from above, from afar, framed at one stage by the centuries-old rock formations that characterise the coastline of Kenton-on-Sea. Then, as the wind whips all around us, we watch it lose air and shrivel up on the shore, leaving behind a strange and mournful still-life.

Those familiar with the work of South African performance artist Gavin Krastin may remember this rogue castle from his 2015 performance On seeing red and other fantasies. Then again, if you’ve ever seen Krastin in action, you might not recognise it outside of the curated chaos. Krastin’s work is frequently characterised by its intentional excess, gaudy sets, carnivalesque costume, sheer volume and, above all else, the use of the body.

In Swell, which is showing as a triptych of video works in a gallery space up at the Monument (and inside our screens thanks to the intervention of a probing 360° camera), there is none of this sort of thing. There’s not even a human presence.

The scene described above is the first of the three video works, parts two and three also featuring the castle and taking place in a stone quarry and a rubbish dump respectively. Not that it matters which order you watch them in.

In Swell, surrealism, fantasy, metaphor, and symbolism are given precedent over conventional narrative. There’s no clear plot to be aware of, or specific events to brace yourself for. There is only the singular ‘character’ – the plastic castle – and its interaction with the environments it so improbably comes to occupy.

In this way, viewing Swell is a strangely stimulating experience. It’s a work that’s full of subtle tension and slow spectacle. In the quarry, as you watch the castle drawing breath on top of thousands of chalky stone shards, there is the constant threat of activity – will it tear? Rupture? Get taken away by the wind?

This quiet, affecting tactic is present in all three of the video works. In the rubbish dump, the castle takes its place on top of a mountain of trash. In the absence of the ocean there are plastic water bottles, and without any natural landscape to speak of, we come to accept the hills of refuse as the scene we find ourselves in.

Has it transformed the landscape irrevocably? Again, the castle stirs, deflates, but does not die. It cannot decompose. What remains is a plastic graveyard, a refuse republic filled with human-made flotsam and the detritus of fun.

Swell is both a successful visual art installation and an engaging performance in three parts. Dramaturgy, directing, and filmmaking are distinct factors of the work, all of them centered on the castle. And the castle, that mournful, playful, sinister structure that disrupts the landscape and refuses to die, is the performer. It’s a charged and ambiguous object. It can be a symbol of fortification, play, refuge, invasion, empire, and more. It carries its own subjectivities and agencies, presents its own choreography, and lends an enduring materiality to the work.

But there is the environment, too. Specifically, the environment of the Eastern Cape. Considering the showing of Swell in the 1820 Settlers Monument (itself modelled after a settler ship and docked at a vantage point that overlooks Makhanda), can we view Krastin’s plastic citadel as a comment on stubborn colonial histories in the city? Is it a surreal take on how badly we’ve fucked up the planet? A work in response to the hot topic of isolation?

In a panel discussion ahead of the opening of Swell, Krastin was reluctant to get into any fixed definitions of the castle and what it could mean, referring to it at one point as a “floating empire”, an abstract spectre that invites multiple readings. Ah, well. Perhaps the name can guide us. Swell: a gradual building up of event, emotion, activity, or sentiment. And always, the eventual letting of it all, the slow release amidst the sea, the stone, the refuse.

Whichever way you read it, it’s a full and successful body of work, and one worth sitting with, floating with, breathing with, as you take it all in. DM/ML