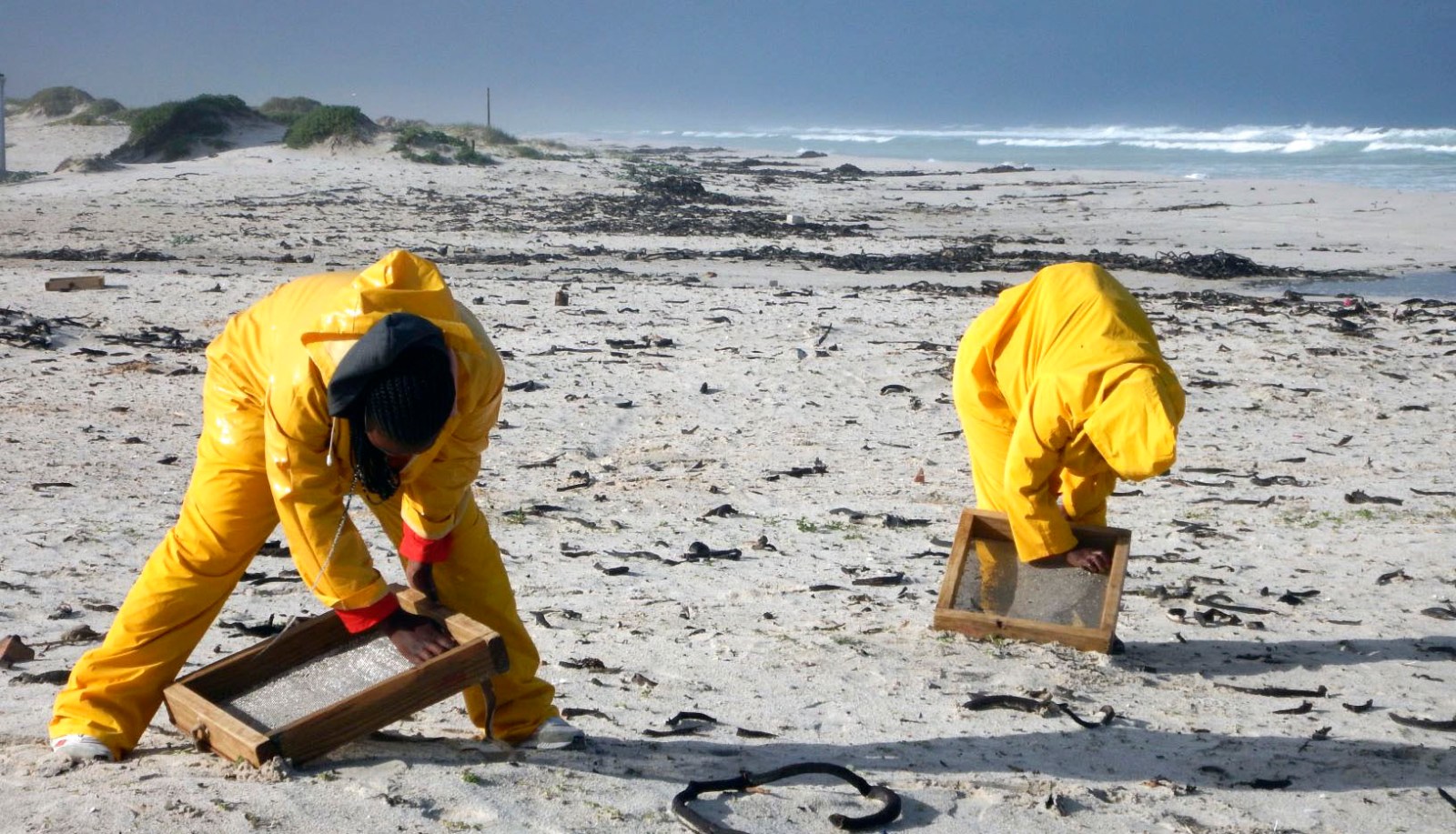 You might have been on a Cape beach recently and wondered why work teams are sieving sand: The Cape nurdle clean-up continues.

When beachgoers first noticed bucketloads of nurdles washing up on Cape beaches in October 2020, non-government organisations and the public started picking them up.

Now Spill Tech teams, contracted by shipping crisis emergency response experts Protecting & Indemnity (P&I) Associates, are picking up the nurdles, which have been providing employment opportunities since they began their clean-up on 4 November 2020.

Nurdles, or resin pellets of less than 5mm in diameter, are the raw building blocks of plastic products. They are made of different polymers and come in different shapes, sizes and colours. Aaniyah Omardien, founder and director of the Beach Co-op, says “the nurdles spilt in the recent spill were made of linear low-density polyethylene, which has a very low density, making them float”.

Omardien explains that “nurdles are found throughout our oceans, even in the Arctic Circle, and it is estimated that about 230,000 tonnes of nurdles enter the environment annually from accidental spills from production, transportation and manufacturing”.

The problem with nurdles is, “they really look like eggs, so they get confused by sea birds, turtles and fish as food, but they can’t be digested, leading to disease, starvation and accumulation in the food chain”.

A virtual stakeholder meeting on 15 January was told the spill was reported to have occurred in August 2020, and while liability for it was still being investigated, Michael Heard from P&I Associates said an estimated 174.5 tonnes had been spilt.

On 27  August 2020, the CSAV Trancura, which was part of Eastern Pacific Shipping’s fleet at the time, berthed at the Ngqura Container Terminal in Coega, Eastern Cape, with a collapsed container stow. The accident occurred en route to Singapore on or about 21 August. The vessel, which sails under the Liberian flag, had sailed from Caucedo in the Dominican Republic on 27 July, according to vesseltracker.com. The spill was also reported on the P&I claims website with a request for interested parties to make contact regarding the recovery of cargo and the protection of interests that were on board.

According to the Western Cape government’s annual implementation report for the Provincial Coastal Management Programme from March, “work is being undertaken by P&I Associates to locate and recover containers lost at sea”. However, according to a recent comment from South African Maritime Safety Authority (Samsa) spokesperson Tebogo Ramatjie, the investigation on the source of the nurdles and the vessel that they might have come from is ongoing.

Anneke Whelan, who is a maritime law specialist, says although the nurdles are suspected to have come off the CSAV Trancura, “the investigation is about which nurdles come from that vessel and which nurdles come from other vessels”. She says not all the nurdles found on the beach come from the CSAV Trancura and the packing material found on the beach does not concur with the packing lists for the Trancura.

Ramatjie says the clean-up operations run from the West Coast to Sardinia Bay in Gqeberha. Initial shoreline surveys were conducted by Spill Tech from the west of St Helena Bay to east of East London in October and November of 2020 with some technical assistance with data capture from the International Tanker Owners Pollution Federation Limited.

Areas with the highest densities of nurdles during the shoreline survey were identified as False Bay, Kleinmond, Struisbaai, De Mond Nature Reserve, Kanon, Gouritz, Jongensfontein, Goukamma, Witsand, Agulhas and Arniston, with the Sardinia Bay Marine Protected Area being added later as a nurdle hotspot and Yzerfontein and Kei River Mouth designated as the boundaries of the clean-up.

In January, 360 workers in 18 Spill Tech teams searched for and collected nurdles, and mobile vacuum units were used on beaches with high densities of nurdles.

Ramatjie says 30.183 tonnes of nurdles had been collected by 15 June 2021. They were taken to collection points along the coast and moved into storage to enable reconciliation of the collection and track progress.

“The joint operations committee set up to monitor the picking up of the nurdles meets from time to time and will rely on the principle of diminishing returns to decide on how long the clean up will take,” Ramatjie says.

Whelan adds that the nurdles will be analysed to determine whether they originated from the CSAV Trancura.

“It is all about liability,” she says, explaining that the ship’s insurance should not have to pay for all of the clean-up if there is evidence that the Trancura is only responsible for some of the nurdles on the beaches. It is also possible that some of the nurdles might have been lost somewhere else and found their way to South Africa’s beaches.

For example, nurdles with the same signature as those spilt in Durban harbour were reported to have arrived on beaches in Western Australia just over a year after the spill.

Dr Eckart Schumann from Nelson Mandela Metropolitan University in Gqeberha conducted research on the movement of nurdles after the spill from Durban harbour in October 2017 and says that he became interested in nurdles because they seemed to move so quickly and so widely after the spill.

Schumann says nurdles float or are neutrally buoyant, so they come primarily under the influence of wind, and that, with waves and currents, can take them anywhere in the oceans, and of course we have the mighty Agulhas current off our East Coast which sweeps everything before it.

Nurdles keep arriving on our beaches because “there are so many of them — billions are used in plastic manufacture and they are taken by ships over all the oceans”.

He further explains that nurdles washed up on to a beach can be covered by sand and brought up by subsequent waves. They can remain there for days, months or years depending on the prevalent waves. Then, another high wave event can erode the beach, setting the nurdles free to drift again. After the Durban spill, nurdles were found in estuaries and then settled into muddy banks until the next substantial river flow flushed them out.

Brenda Walters, the operations manager of Dyer Island Conservation Trust in Gansbaai, says Spill Tech is doing a great job and that the government seems to have got on top of the problem very quickly.

At a second virtual nurdle stakeholder meeting on 15 February 2021, Nick Sloane of Resolve Marine said the clean-up of the Durban harbour nurdle spill continued for more than two years, from October 2017 to December 2019. It was stopped once about 72% of the original 49.5 tonnes had been collected and a monitoring plan of several years was agreed to. Sloane said it was important for nurdles to be stowed below deck during transportation on ships.

Lorren de Kock from the World Wildlife Fund believes nurdles need to be classified as hazardous by international shipping laws so that shipping companies are required to transport them in the hull. She says the consequences of a nurdle spill are “as bad as an oil spill, if you look at the environmental fallout”, adding ship owners wait for insurance to be paid out before they cover the costs of clean-up, and “until that insurance is paid out, it’s public money that is used to clean up”.

However, there are sources of nurdles in the environment other than container spills. For example, Sloane mentioned nurdle discharges from industry at Blue Lagoon, the estuary of the Umgeni River, were discovered during the clean-up of the Durban nurdle spill.

According to De Kock, South Africa consumes more than two million tonnes of plastic raw materials each year, and only half of that is manufactured locally, so about one million tonnes is brought in”.

An International Union for Conservation of Nature report estimates that nurdles make up 100 tonnes of the 72,000 tonnes of plastic that is leaked into waterways and the ocean every year from land-based sources in South Africa.

However, De Kock says that the situation is improving through Operation Clean Sweep, which is an industry initiative that Plastics SA is involved in. She says “they give training and provide guidance to the manufacturing and recycling industry on how to limit the leakage of these nurdles”. Ultimately, although progress is being made under the South African Plastics Pact, she says retail owners and brand owners should use less plastic. DM/OBP