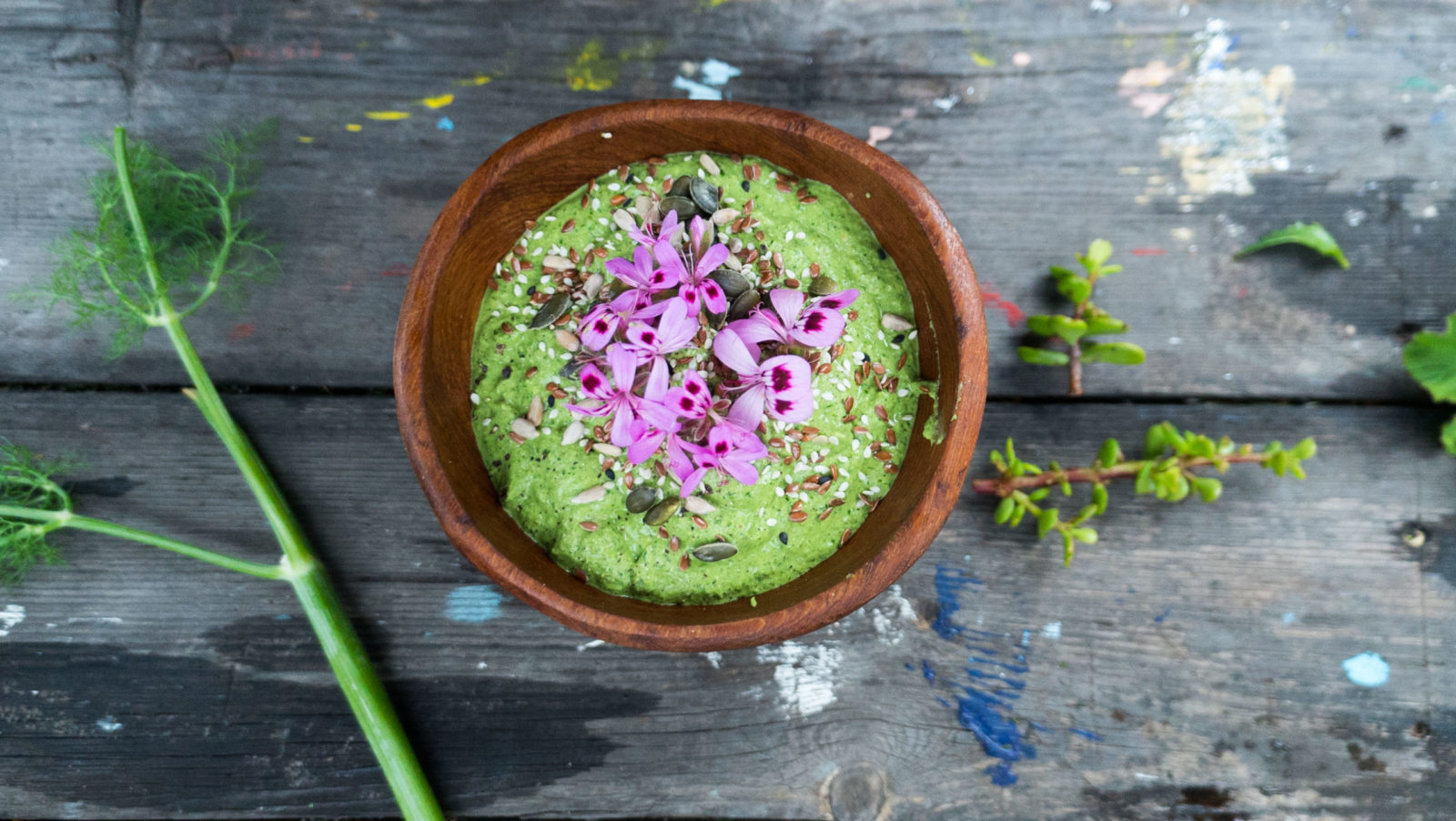 ‘Walking in the veld, you just have to brush against a fynbos plant and you’re assailed by the incredible aromatic smells,’ reflects indigenous food activist Loubie Rusch.

“Once you start eating [local plants] and tasting them, what’s not to love? Fynbos is full of the most incredible plants, what a palette to draw from,” says Loubie Rusch, the founder of the organisation Local WILD and the brand Making Kos which “promotes reviving knowledge, emphasises cultivation & encourages eating local Cape foods”.

“There is just so much to learn, it’s just incredible, learning from other people, knowledge holders, rural people who have such an intimate connection with the land. One of the things about a foraging landscape is that your knowledge is so deeply rooted in the land, not like a farmer where you can take your seed with you; if you are a forager you really need to know your place very, very well,” Rusch explains.

She began her indigenous food journey and cooking by making bottled produce from local ingredients and selling it at the Oranjezicht City Farm Market in Cape Town. Her organisation is dedicated to all the food that surrounds us that we wouldn’t necessarily know to eat.

“It really makes little sense to me that we live in one of the world’s most rich plant kingdoms and yet we eat virtually nothing of what is around us,” she says on her website.

“The thing that was most interesting to me was how much we don’t know about our natural environment and that food is a beautiful learning tool or a connector that we can all relate to,” says Roushanna Gray, the founder of Veld and Sea, which organises edible indigenous plant and foraging workshops in Cape Town.

For example, sour figs and ice plants, which are popular in gardens, are not just pretty to look at, but can be used in the kitchen as well. Sour figs can make a tangy jam, and the succulent leaves and stems of the ice plant can be pickled or used as a garnish.

“While a lot of indigenous plants have medicinal uses and wildcrafting value, they also offer stewardship for traditions, cultural heritage and ecosystems. Indigenous plants encourage local pollinators and biodiversity. Some can offer stability for sand dunes, others play critical roles like home and habitat for wildlife,” Gray explains.

“Indigenous plants are perfectly designed for our climate, they are waterwise, hardy and wildly delicious; each edible species offers a unique set of nutritional value.”

Indigenous foods have captured the imagination of local chefs, too, and the simple shrubs that cover the Western Cape now grace the plates of Cape Town’s finest restaurants. Foraging has also become popular – although wild foraging shouldn’t be encouraged, but more on this later – with some cooks drawn to the allure of serving what they have handpicked themselves.

“There are hundreds, if not thousands of indigenous edible plants in South Africa. Not all of them are edible raw, some have to be prepared in specific cooking methods, some are only edible in certain seasons and most are not sustainable to be picked unless grown in your own garden,” explains Gray.

“The best ‘entry level’ beginner wild foods that are easy to identify, super sustainable to harvest, delicious and nutritious are our backyard weeds like nettles, mallow, dandelion, lamb’s quarters and chickweed. A favourite recipe using these wild greens is in a healing broth bowl, incorporating seasonal veg, wild greens, seaweeds, edible flowers and hand-cut noodles into a food art meal of dreams.”

A form of ice plant, brakslaai, is one of Rusch’s favourites. It grows in the Northern Cape and on the Eastern and Western Cape coasts, and is, she notes, a “salty, sour, juicy explosion”.

Dune spinach, a shrub growing out of the sand with thick, dark-green leaves, can be eaten as well. It is best to use new growth fresh from the rainy season, wash to remove any clinging sand, and then boil and serve with seasonings and butter.

“It’s a prolific, versatile and tough creeper that is able to feed us generously,” Rusch says. “It could really become a substitute for spinach, it grows so vigorously as well.”

In the Cape region, humans have been eating indigenous plants for centuries, says Dr Elzanne Singels, an environmental consultant in botany and archaeobotany.

“On an intuitive level I think every human has the capacity to learn about the uses of plants. The plants, of the Cape region specifically, supported the earliest Homo sapiens and ensured our species’ survival in this region throughout periods in the past when the rest of Africa would have been uninhabitable.

“We have, in part, evolved to interact, experiment and eventually use the plants in this region and it kept our ancestors alive. Isn’t it an empowering thought, that you are carrying just a fraction of this knowledge and practising it on occasion? It is a deep connection to our evolutionary past and a time when we lived closer to nature,” she says.

In fact, Singels says, the history of indigenous edible foods in South Africa is “as ancient as the human lineage and as recent as the present”.

“Humans have been using the indigenous edible foods in South Africa since humans existed, and some of these plants are still used to this day,” she explains.

However, Rusch warns against foraging yourself – it is illegal to pick fynbos, and it can add to the stress the Cape Floristic Region is already under. More than 1,000 fynbos plant species are threatened with extinction, reports the WWF.

“The best way to ensure sustainability and accessibility is for these edible species to be planted in home gardens and become introduced into small-scale commercial farming, local co-ops and community gardens,” believes Gray. And this is exactly what Rusch is now championing: the cultivation of edible indigenous plants as an alternative food source to fight food insecurity, and she is starting up a non-profit organisation, Local Wild.

“Everybody eats; food can be such a way of joining people together,” she says, adding that she wants to support a reconnection of South Africans to these old foods that “supported people living here for millennia”.

“I think the loss of knowledge that we’ve suffered here in the Western Cape has been through people becoming disconnected from the land and not having land access.”

Rusch works with small-scale farmers, helping to set up community gardens and educating people on how indigenous plants can be farmed sustainably and used as alternative food sources.

On this, according to research by Francia-Marié de Bruin at Stellenbosch University, community gardens can be “spaces of transformation and belonging” that can support “nutritional food security, provide incomes, as well as expand the supply of alternative or supplementary resilient food resources into the food system”.

With 40.4 million people living in acute hunger in southern Africa, Rusch believes there is a key opportunity to partly combat food insecurity by cultivating indigenous plants. At the same time, she works to connect the farmers to potential consumers.

“If we start to cultivate local indigenous crops, instead of using transposed agricultural systems, we can start reclaiming some of that lost land, using plants that clearly have been shown to be resilient over millennia. It’s about exploring a completely new way of accessing the many foods that do extremely well in our landscapes, where we support them.”

“Interacting with the floral diversity of our country is a way of celebrating our heritage, and honouring the heritage of indigenous cultures,” Singels says.

“The best way of doing this is to simply go out into nature and enjoy them, buy a guide book for your area and start learning about them as you find them in the wild.

“You can visit indigenous nurseries and start growing these plants in your garden and utilise those plants after you have thoroughly researched how to do so.