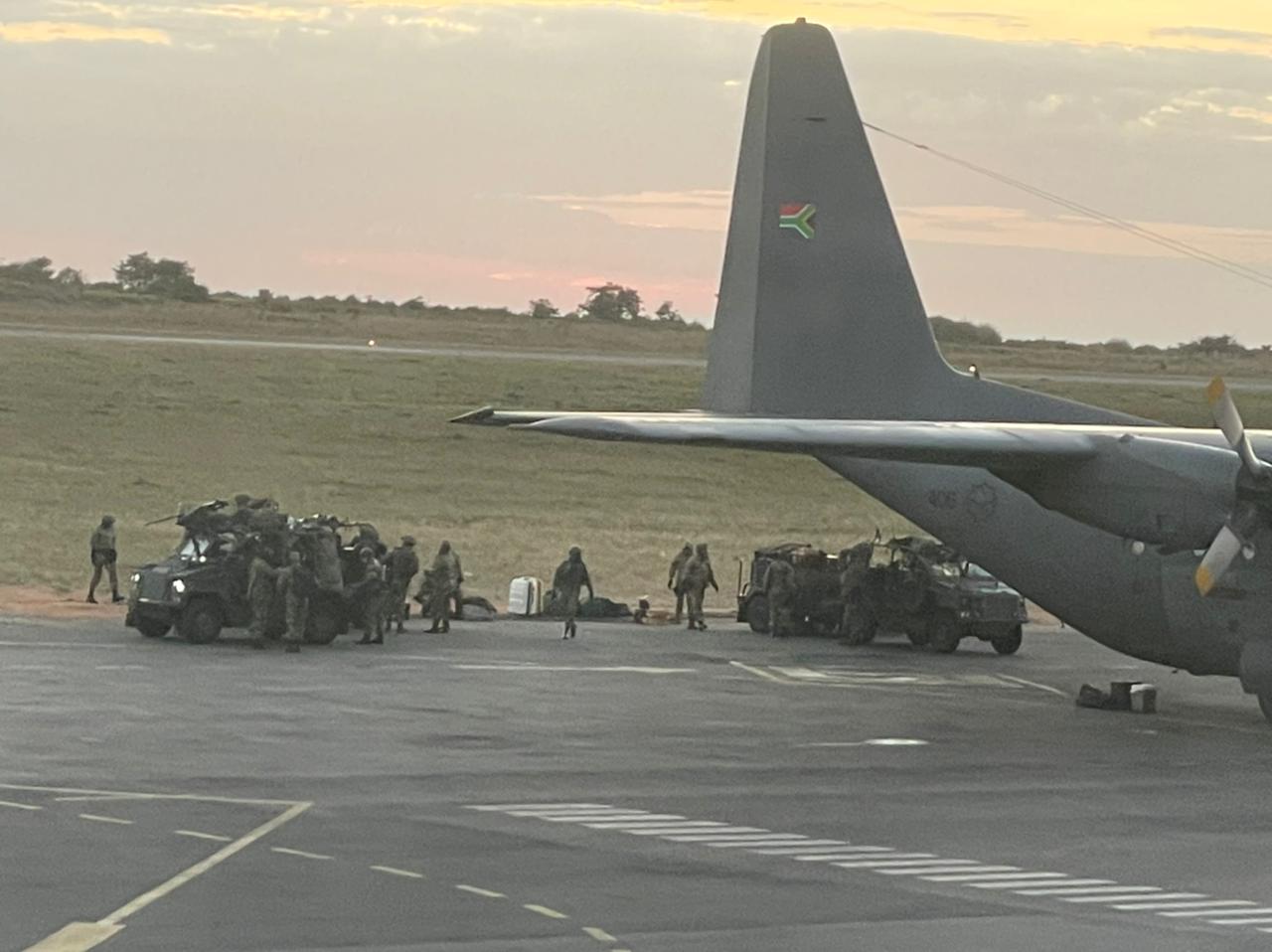 The advance party has arrived, despite calls for the defence minister to focus her forces on South Africa’s own ‘attempted insurrection’.

Officials from the South African government and the Southern African Development Community (SADC) and local security analysts confirmed that leading elements of the SADC standby force – including its South African commander – were already in Mozambique.

Military sources said small contingents of special forces from the standby force, including South Africans, had been flown into Pemba, the provincial capital of Cabo Delgado, on Monday.

This week the DA called on Defence Minister Nosiviwe Mapisa-Nqakula to delay the deployment of SANDF troops to Mozambique until there was “absolute certainty that internal security threats have been contained”.

DA defence spokesperson Kobus Marais said on Saturday the deployment of 25,000 SANDF troops to KwaZulu-Natal and Gauteng to ensure stability and security after last week’s looting and arson “will stretch our national defence capabilities to the limit”.

“Priority should be placed on stabilising the security situation in the country and restoring law and order. South Africa’s ability to meet its international military assistance obligations is only possible if our own internal security is stable and secure,” Marais said.

However, it appears the defence minister has decided to go ahead with the Mozambique deployment anyway as several security sources in Mozambique as well as SADC and South African officials have confirmed the arrival of advance elements.

But Mapisa-Nqakula had told members of Parliament’s defence portfolio committee on Sunday that an advance party of the SADC force would determine if the full proposed force was needed. Though the size of the proposed standby intervention force has not been officially revealed, a provisional report drafted by military experts in April proposed a force of almost 3,000 troops, comprising three infantry battalions and two special forces squads, with support elements and attack helicopters as well as patrol ships and aircraft and a submarine.

Meanwhile, Rwandan troops, who arrived in Cabo Delgado on Friday,  have already engaged in a firefight with the insurgents, according to security sources in Mozambique. They said on Tuesday the Rwanda Defence Force (RDF) soldiers set off early on a patrol from Afungi – the suspended liquid natural gas processing plant – into the forest around nearby Palma and then encountered the insurgents at the village of  Quionga.

“As the insurgents retreated towards the Tanzanian border, a total of 30 insurgents were reportedly killed by the Rwandan units. Late afternoon the RDF was still patrolling the forest areas around Afungi,” the military analyst said.

He also reported several attacks by the insurgents on civilians in Muidumbe district to the southwest, including the villages of Nampanha and Mandava, on Monday.

And on Tuesday Mozambique security forces rescued, unhurt, the pilot of a light aircraft that had been forced to crash land on the beach south of the coastal town of Mocímboa da Praia, which has been occupied by insurgents since August 2020.

The source said on Monday the aircraft, presumably chartered by a private company removing equipment from Afungi, had lost its propeller while flying over Mocímboa da Praia. The pilot had managed to glide the aircraft south of the town before landing. Government forces in helicopters had tried to lift the aircraft but failed and so decided to destroy it.

It is not clear what the aircraft was doing over Mocímboa da Praia. There is some speculation that it might have been doing photo reconnaissance.

The source said that at dawn on Tuesday a Mozambique government patrol had launched an attack on insurgents at Saba Saba village on the border between the Mocímboa da Praia and Muidumbe districts.

And some Rwandan forces had deployed to the town of Nangade in Nangade district, west of Palma.

Meanwhile, a dhow carrying people displaced by the fighting, from Ibo to the provincial capital of Pemba in the south, had sunk and 11 women and children had drowned, the security source said. DM