How to protect hospitalised infants from dangerous germs 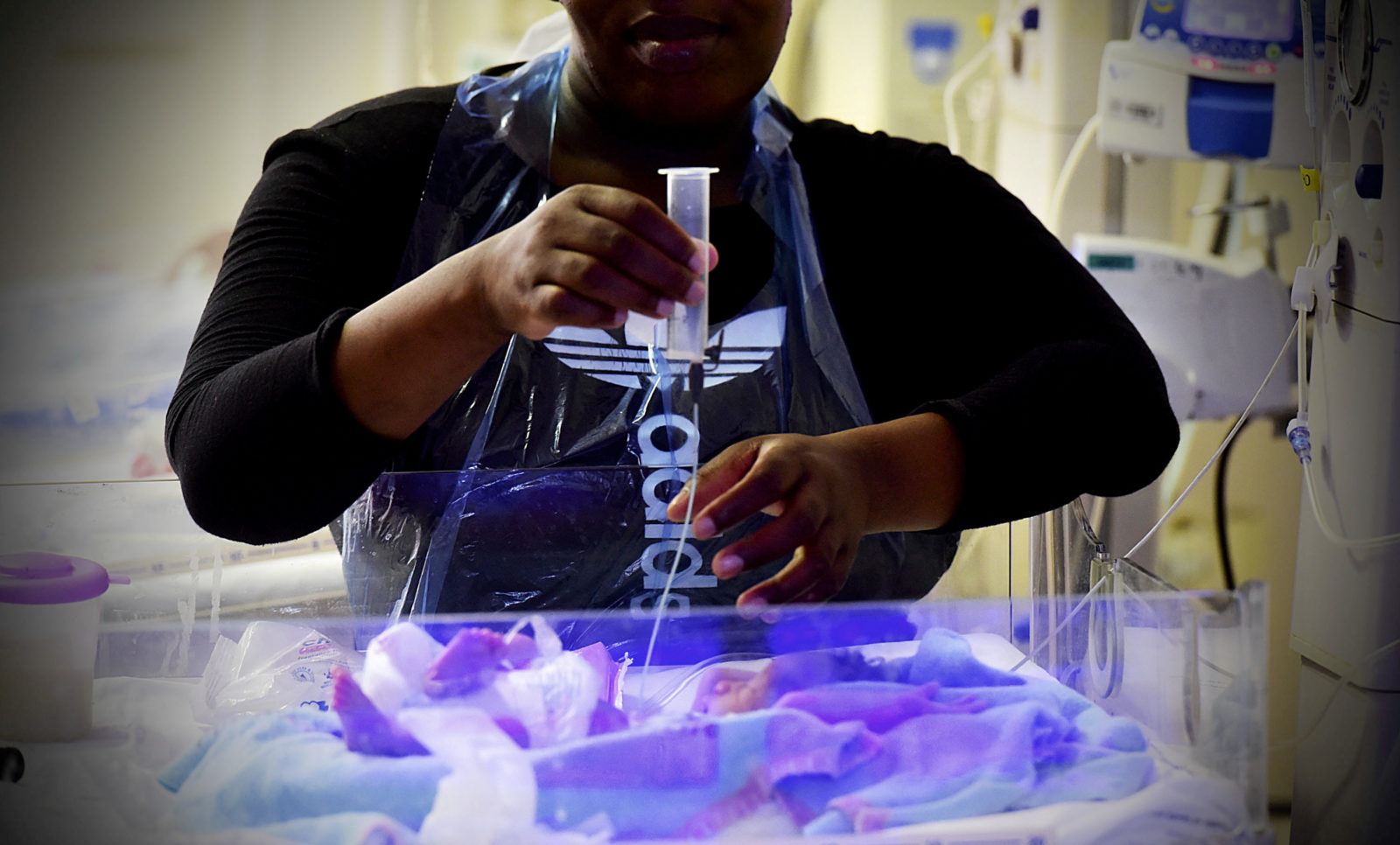 Over the past four years, 34 neonatal infection outbreaks have been reported to the NICD by public and private hospitals in the country. (Photo: Denvor de Wee / Spotlight)

Outbreaks of hospital-acquired infections such as Klebsiella have claimed the lives of infants and made headlines on a number of occasions over the past decade. What can be done to prevent these outbreaks?

Every few years we see headlines about infants contracting dangerous infections in hospitals and in some cases dying of these infections. In January last year, the National Institute of Communicable Diseases (NICD) confirmed an outbreak of Carbapenem-resistant Klebsiella infections in infants at Tembisa Hospital in Gauteng. In 2018, there was an outbreak at Thelle Mogoerane Regional Hospital in Gauteng and in 2016 at Mahatma Gandhi Memorial Hospital in KwaZulu-Natal.

These infections fall under the broad umbrella of hospital-acquired infections (HAI). As the name suggests, says Professor Daynia Ballot, head of the clinical unit (neonatal unit) at Charlotte Maxeke Johannesburg Academic Hospital, these are simply infections that patients get while admitted to hospital.

Viral infections such as Respiratory Syncytial Virus, Norovirus, or even Covid-19 can be transmitted in hospitals, explains Ballot, but bacterial infections are most common in the neonatal wards, including Klebsiella and Acinetobacter species.

It is not always easy to identify sources of pathogens that cause outbreaks because many pathogens are found widely in the hospital environment, says the head of the Centre for Healthcare-Associated Infections, Antimicrobial Resistance and Mycoses at the NICD, Professor Nelesh Govender. He says that the pathogens can contaminate patient equipment and bed linen; colonise the skin or gut of patients and contaminate healthcare workers’ hands.

“When there is insufficient adherence to IPC [infection prevention and control] such as no hand sanitising between caring for patients, person-to-person transmission may occur, leading to a large number of patients developing infections at the same time.

“Rarely, some medical devices, sanitisers, or medications may be contaminated from the source and this may also lead to infections in all patients exposed to these.

“For some outbreaks of drug-resistant pathogens, there may be an external source with the introduction into the ward from a colonised patient who was referred from another ward or an entirely different facility,” he says, adding that healthcare workers who work at different hospitals may also unknowingly transfer pathogens between hospitals if they are colonised.

Besides physical contact, some infections, mostly viruses rather than fungal or bacterial infections, can also be spread through the air. This is why ventilation and personal protective equipment are so important in Covid-19 wards.

While Covid-19 does not pose a particularly high risk for newborns, newborns are unfortunately at high risk of various other infections.

“Hospitalised premature neonates are at high risk of HAI owing to their immature immune systems, use of invasive devices such as central or umbilical vascular catheters and mechanical ventilators, broad-spectrum antimicrobial use, frequent contacts by healthcare workers and in-hospital exposure to infectious diseases,” explains Govender.

Ballot points out that babies on ventilation are at increased risk of HAI because intubation breaks the natural barrier of the respiratory system and non-invasive ventilation should accordingly be used where possible.

Ballot also notes that they are seeing increasing numbers of “superbugs” which are resistant to most available antibiotics, meaning that the antibiotic cannot kill the organism.

“Effectively, we do not have treatment for infections with some of these organisms. Babies at risk of these infections include those born very pre-term, those of very low birth weight, babies who have congenital abnormalities, those who have had major surgery, and those who stay in hospital or on the ventilator for prolonged periods,” she says.

Ballot says there is a need for a concerted infection prevention strategy that focuses on handwashing, promotion of breastfeeding, reducing overcrowding, and antibiotic stewardship.

“All aspects of the infection prevention strategy must be addressed, with a particular focus on handwashing. All the outbreaks need to be managed by a multidisciplinary team including the ward staff (nurses, cleaning staff, and administrators), an infection control nurse, the microbiology team, and the neonatal doctors,” she tells Spotlight.

Quality care at birth is essential says Ballot, and although we are in a resource-limited setting, more is not always better.

“We can implement strategies such as Kangaroo Mother Care and breastfeeding, which significantly improve neonatal outcomes without greatly increased cost. More nurses in high-care and ICU settings would decrease infection – nurse-to-patient ratios are important considerations in these specialised units,” she says, adding that they often go over the recommended ratio of one nurse to two patients in neonatal ICU, which increases the risk of infection.

Govender says because most of these outbreaks are due to pathogens that are transmitted from person to person, as the first step for all outbreak investigations, the NICD always recommends stricter adherence to basic IPC practices such as hand hygiene.

“Isolation or cohorting of infected infants and in some instances, cleaning of the hospital environment are also helpful to limit further transmission in a particular unit. These simple measures, if sustained, are usually sufficient to control outbreaks. However, some pathogens are difficult to control and require additional IPC measures,” he says.

Many of the outbreaks, Govender says, have been exacerbated by health system deficiencies such as overcrowding, leading to babies sharing cots or an insufficient number of hand hygiene supplies.

“Overcrowding also means fewer unit staff than required and this may lead to a breakdown in basic IPC. Inappropriate extensive antibiotic and antifungal use has also, to a lesser extent, fuelled outbreaks caused by drug-resistant pathogens,” he says.

How common are these outbreaks?

Govender says that over the last four years, 34 neonatal infection outbreaks have been reported to the NICD from various public and private hospitals in the country and just over half have been in Gauteng (53%).

“This does not mean that more outbreaks happen in this province, since not all outbreaks are reported to the NICD,” he says.

According to Ballot, the rate of neonatal hospital-acquired infections has increased significantly over the past two decades both in the number of infections and in the degree of severity.

“[Infections] have more than doubled and the number of antimicrobial-resistant organisms has increased dramatically. Many of these infections can be very severe, but this depends on the organism. The mortality rate of HAIs with gram-negative organisms [a group of bacterial infections] can exceed 50%.”

Govender says it is estimated that 10% of people with HAIs will die. However, special populations such as those in intensive care units and neonates, particularly premature neonates, have a higher risk of death.

“We do not currently have national data on mortality due to HAIs. Statistics South Africa (2017) ranks infections as the fourth-leading cause of death among neonates. It is not always possible to attribute the cause of death for neonates who die while they have an infection as they are often born prematurely with pre-existing or underlying conditions,” he says.

Govender points out that a post-mortem study done on neonates who died in a large neonatal unit determined that infections were responsible for 58% of all deaths and 70% of all deaths for neonates born prematurely.

“Post-mortem analysis is the most accurate manner in which cause of death can be determined; this study, therefore, provides evidence that infections may well be the leading cause of death, but more studies like these are needed to be certain,” he says.

The NICD currently performs national surveillance for neonatal BSIs. According to Govender, the overall incidence of BSIs in neonates has remained stable between 2014 and 2019.

“However, it is equally important to note that more preterm babies are surviving for longer times and therefore there are more babies at risk for HAIs during their long hospital stays.

“The trends in infection may also vary from neonatal unit to neonatal unit and there is a need for real-time routine collation of unit-specific BSI data so that units can monitor their own BSI trends over time. Unfortunately, rates of resistance to the first, second, and third-line empiric antibiotic treatment regimens for neonatal BSIs have risen significantly over the past six years,” he says, explaining that this is true mainly for Gram-negative bacterial infections (such as Klebsiella pneumoniae and Acinetobacter baumannii) and is seen across all hospital levels (central, tertiary, provincial and regional).

Govender says Gauteng and KwaZulu-Natal provinces have the largest numbers of culture-confirmed neonatal BSIs due to their relatively larger population size, larger number of tertiary or central hospitals, and referral centres caring for extremely vulnerable patients and generally enhanced diagnostic practices (more blood cultures are taken per 1,000 live births). However, overcrowding in neonatal units and shortages of staff is a major driver of HAIs and is a problem in almost every unit in almost every province. DM/MC

Young and committed: Women as agents of change are powering the collective shift towards a just society

Gay is okay: Justice may have been delayed, but not denied, after the Qwelane ConCourt judgment