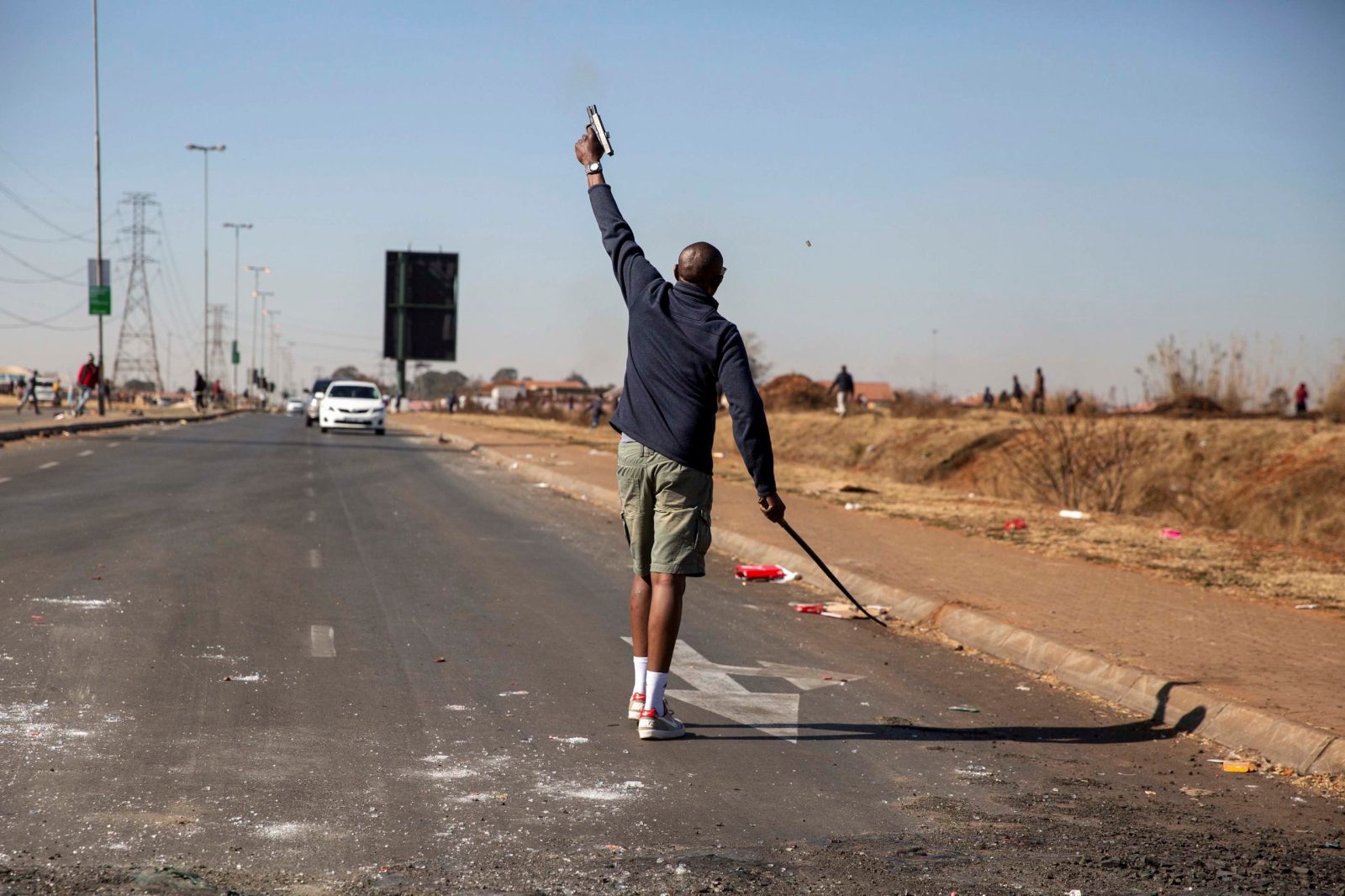 In the absence of the state, communities are shaping their own slow recovery from days of rioting and destruction. They are hopeful in some places, hateful in others.

Just over a week since the onset of sweeping riots and unrest in Gauteng, efforts to stem the resulting wave of destruction are as disparate as the communities undertaking them.

The riots, which were by turns tragically desperate and grotesquely violent, quickly exposed vacuums in both the provision of life’s barest necessities to masses of people, and in the state’s ability to foresee or forestall the targeted destruction of key supply-chain infrastructure or the bigoted vigilantism it engendered in many places.

When President Cyril Ramaphosa addressed the nation for the second time in a week on 16 July about the uprisings, he acknowledged both these failings. But what will fill the voids — an experiment now largely playing out at the community level in South Africa’s economic heartland — remains unclear.

In the early morning before Ramaphosa’s address, the worst of the previous week’s wreckage had largely been cleaned up at the Chris Hani Mall in Vosloorus on Gauteng’s East Rand. Named after South Africa’s communist hero, the strip mall of fast food, fashion outlets and banks was still a dystopian scene, with a Ferris wheel and funfair the only things separating it from the cemetery where, earlier in the week, Vusi Dlamini, 14, was killed when taxi drivers fired live rounds at fleeing crowds.

In nearby Katlehong, women were delivering breakfasts of white bread sandwiches and hot coffee in polystyrene cups to groups of men who had manned intersections overnight in a largely successful attempt to protect the only mall not yet looted in the area. One of them, Jonas “Finger”, 48, explained that he and his neighbours had learnt the tactics they were now using — blockading key roads, slowing and redirecting traffic — during the 1990s, when violence between the African National Congress (ANC) and Inkatha turned the East Rand into a killing field.

In that time of terror, nearly 2,300 people died in and around the Witwatersrand’s hostels in the first year alone after violence broke out on the Reef in 1990. When some hostels became de facto military camps for Inkatha — armed and organised by apartheid’s police and defence forces — nearby communities, like the one in which Finger was born and grew up, were forced to organise in order to repel the attacks on townships and commuters that were being launched from those fortresses of fear.

If the recent history of the East Rand is a warning of the bloody political potential that drips from South Africa’s economic exclusion, it is also a lesson that mobilisation of progressive forces is as likely.

In the early 1980s, when the living conditions in the hostels led one metalworker in Vosloorus to say, “a hostel dweller is there to preserve his sorrows, he does not reside there because he is happy”, migrant workers found a shared identity in the grassroots unionism of the late 1970s, and, by 1981, had provided the impulse for a wave of strikes that enveloped the East Rand.

In Katlehong today, understanding of the political roots of the recent riots is as varied as anywhere else in South Africa. Community members taking a stand against the looting many believe to have been set off by Jacob Zuma’s arrest, for instance, described him as either “brilliant” or a “rotten apple”. But if the explanations remained confused, the response, organised around tactics learnt in a time when South Africa stepped far nearer to the precipice, was certain.

The vigilantism of community-based structures elsewhere in Gauteng shows that the ability of some East Rand communities to marshal existing structures and tactics is anything but ubiquitous. At a clean-up operation at Jabulani Mall in Soweto, which had been one of the most publicised sites of looting at the height of the riots, the participation of local community members was pushed aside altogether as the mall was quickly turned into one of the theatres for political photo opportunities playing out across the province.

Instead, national and local government media teams and volunteer organisations from across the city pushed brooms and rakes through the glass, rubble, and fruit and meat starting to rot in the sun.

From WhatsApp groups all the way up to the president, the response of communities — that vaguest of South African concepts — has been held up against the malevolence of the mob. But responses on the ground show that, as Gauteng begins its journey through the afterlife of the unrest, understanding its next phase will be more a question of mathematics than arithmetic.

Simplified accounts of lambs and wolves will miss the point. A many-headed hydra is more likely to fill the province’s void.

In Johannesburg’s inner city, for instance, a prominent Yeoville activist and supporter of Zuma and the ANC’s radical economic transformation faction was front and centre of the ethnic protests against the former president’s jailing that initially sparked widespread looting in the city. He has since led the community resistance to looting in that neighbourhood. Nhlanhla Lux Dlamini, who was mobilising xenophobic marches against migrants in Soweto a month earlier, has overnight become the media darling of community-led resistance to looting.

The Eyethu Mall in Orange Farm, where on 16 July a few soldiers-come-lately were the only sign of the state’s delayed response to the unrest, was among the many places that showed the rotating door between “community” and “mob” is not the only complicating factor for the next phase of the unrest.

Shopping malls like Eyethu, built in peripheral black neighbourhoods, have long been celebrated for opening South Africa up to mass consumption. During the country’s economic heyday of the mid-2000s, a common refrain was that a shopping mall was being built every week. But during a week of utter mockery of the economic democratisation that these malls were meant to represent, they were transformed into more accurate expressions of South African modernity.

The streets outside of Eyethu, dotted with small businesses living off the mall’s foot traffic, were monuments to the complexity that has characterised community responses to the uprisings.

While monstrous racial tensions erupted in Durban, and migrant-owned businesses were targeted in some places, a Pakistani-owned store outside the Orange Farm mall largely escaped the week’s carnage after nearby African community members protected it. When explaining how they had managed to ward off would-be looters, one of the store’s guardians said that, “we play soccer with them and we drink with them, so we know them. It is important to know them.” DM