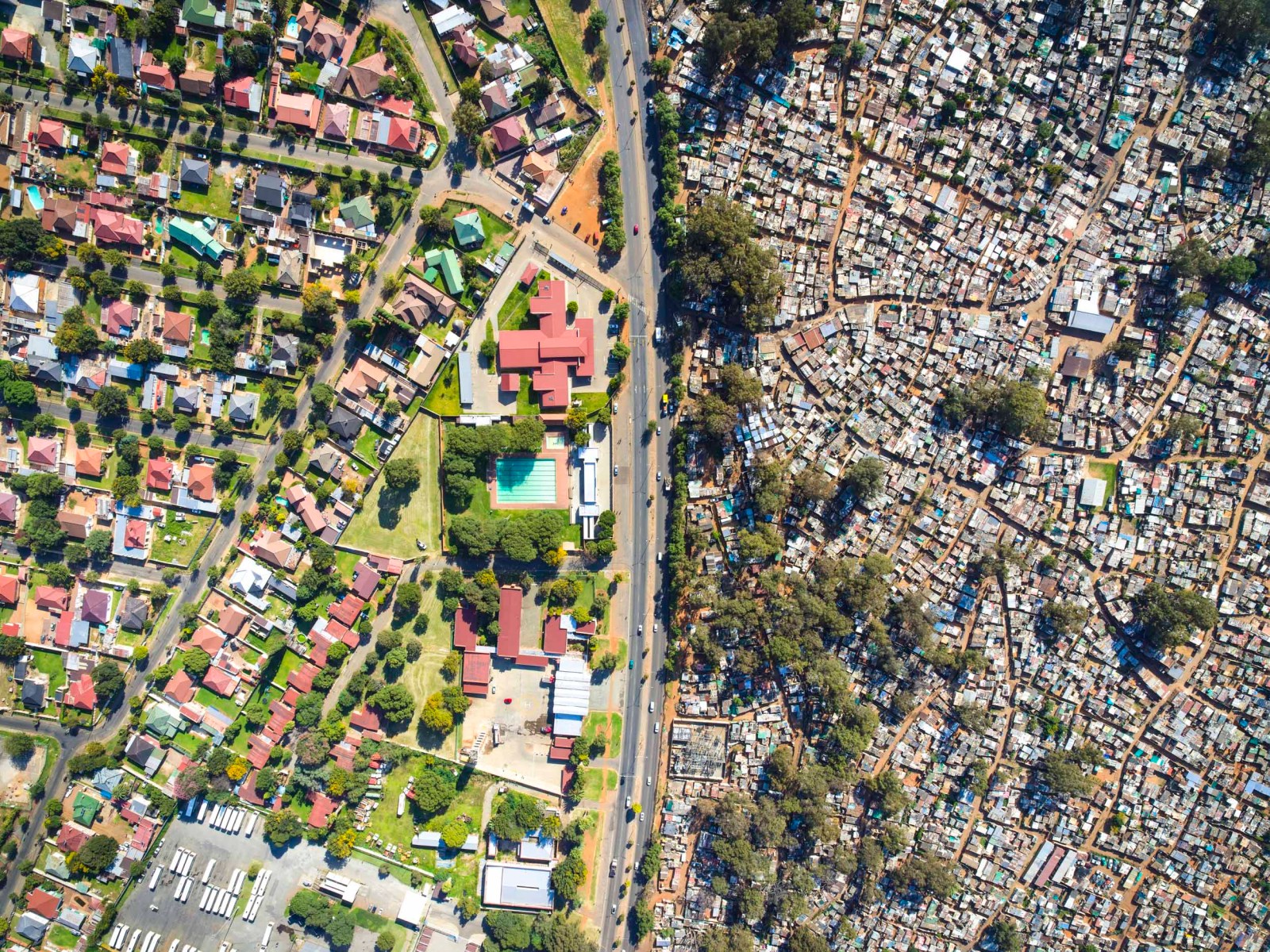 The political landscape may have changed, but the landscape of our cities remains largely the same as apartheid-era South Africa. The borders are no longer legally enforced, but their legacy is still keeping South Africans separated, and divided we fall.

The accident of where you were born, who your family is and what kind of economic and social circumstances you’re born into has a really massive and material effect on what possibilities there are for your life and for your community,” explains Dr Naomi Roux, a senior lecturer in the School of Architecture, Planning and Geomatics at the University of Cape Town.

South Africa is one of the most unequal countries in the world, where a huge amount of the nation’s wealth remains concentrated in the top 1% of the population, and the top 20% holds over 68% of the country’s income, according to a 2020 report by the International Monetary Fund. This means that income distribution remains highly skewed, and the top 10% of the population spends on average 7.9 times more than the bottom 40%, states data from StatsSA.

Aside from the facts and figures, the inequality is visible, the separation between people is tangible, and the foundations of cities run deep, built around colonial ideology that has not left us.

“It is important to understand that apartheid was a consequence of centuries of spatial inequality and displacement, rooted in agendas of conquest and colonial land grabs. Apartheid and the effects of that moment which was most visible on the global stage is still being felt,” explains Maurietta Stewart, a heritage practitioner, planner and academic.

Though the legal borders were abolished, the effects of the act manifests in borders that are still maintained decades after the apartheid regime ended.

“In South Africa, pictures paint a thousand words, and within cities, we can see visual fault lines between rich and poor. When we map indicators across the country as a whole, it is often easy to visually identify the borders between former apartheid homelands and the rest of the country – without actually having to draw those borders on the map.

“Almost three decades since the homelands were abolished, the invisible line still exists: people experience hunger more regularly in these areas and they have very low access to jobs.

“Those histories are written into the landscape,” Roux says.

While these spaces are connected by highways and in some cases, are mere metres away from each other, they are worlds apart. Inequality has separated us, and countrymen live in different South Africas, a nation divided. This is apparent in who has access to what amenities, jobs, education and lifestyles.

“Within every city and town, exclusive business precincts and upmarket suburbs with first-rate amenities are juxtaposed with overcrowded townships and squalid shack settlements. In rural areas, remote villages with mud schools and no piped water contrast with luxurious game lodges and affluent country estates,” writes Professor Ivan Turok in a 2018 paper, an expert in urban and regional development and policy.

“One inequality feeds into another, and can reinforce the existing spatial patterns. Living in a poorly serviced part of the city can constrain long-term life prospects,” Von Fintel explains.

“Spatial and geographic inequality is a deliberate engineered condition which has been engraved on our City’s landscape through centuries of racist ideology which has been inherited. This is not just a physical spatial manifestation but it is deeply connected to identity, inheritance and heritage,” Stewart says. The effects of divisions are rearing ugly heads in post-democratic South Africa, with enormous consequences on mental and physical health, and the impact of the environments people traverse is carried in bodies.

“We see the spatial inequality by ways people move through space. For example, for a woman to wake up at 4am in Khayelitsha, walk through unsafe streets, wait for a bus which will take her to a taxi rank, wait for a taxi, and the get dropped off in Constantia, where she has to walk further to get to her place of work as a domestic worker is grossly unjust,” Stewart poses.

“She has put her body at risk, she is constantly on high alert. Her mental health is impacted. Her money is used on exorbitant transport costs. She has no quality time with her family and spends her days looking after someone else’s family in Constantia. Her kids have to get to school on their own. They are not safe. They have no parent at home to help with homework. There are so many of these scenarios.”

Roux believes that righting these wrongs involves “undoing the circumstance where  your life is so circumscribed by just where you were born”.

“Even separate from all other issues, the difference between being born in Oranjezicht versus Khayelitsha is so determinative in many ways of what’s available to you,” she says.

“If you live somewhere that’s 30 kilometers out of the centre of Cape Town and you have a job in the CBD, it’s kind of almost impossible for you to get proper access to the amenities of urban life. These legacies of the past, that we’ve not been able to overcome, are so encoded in how cities are laid up, where people live, what kind of circumstances we live in.”

Spatial inequality, like most unjust things, still exists because it benefits an elite minority. It is an ugly cycle that systemically maintains a standard of living that varies, determined on postal code and street name.

“One of the central jingles in real estate is ‘location, location, location’. If wealthier citizens gained access to the best locations first, their every economic decision can reinforce their existing wealth; they are likely to safeguard their premium locations in which they have invested. If poorer citizens are excluded from these beautiful and economically central locations, they remain excluded from accessing and creating new economic opportunities,” Von Fintel explains.

“Introducing low-cost housing into wealthier areas brings fears of crime, high-density living and added strain to otherwise smooth service delivery. There is resistance to this kind of change. In many cases, poorer individuals have established themselves in informal settlements close to wealthier areas. But slow integration into infrastructure networks mean that living conditions remain poor: with poor sanitation, reliance on illegal electricity connections and no permanent water connections. This contributes to conflict: one part of a neighbourhood is established and enjoys world-class services, the other part experiences the opposite.”

Stewart echoes this, saying that power and economic gain entangled with race and identity are a dangerous combination, which plays out in history again and again.

“If spaces are divided, people are divided. If they do not interact across these spatial divides, then social and business networks stay the same, and there is little scope for learning from each other, and to pursue innovation. Spatial exclusion can therefore translate to a lack of innovation and opportunity for some – it has invisible impacts that are nevertheless real,” Von Fintel says.

“I don’t think all South Africans have internalised the deep-seated woundedness we are in. It is extreme. We have to do a deep reckoning [and] deal with the everyday injustices which took place against all brown bodies in our country. We need to hear the stories of dispossession, heritage, loss of heritage, and how homes were stolen. All of us need to hear it,” believes Stewart.

“We need to deal with the systemic and generational trauma which has muscle memory. When we see tyres burn and buildings torn down, we need to ask why and we need to listen.” DM/ML

All images are courtesy of photographer Johnny Miller; to view Miller’s work and discover more images from the Unequal Scenes project, click here. You can also follow him on Instagram: @johnny_miller_photography.