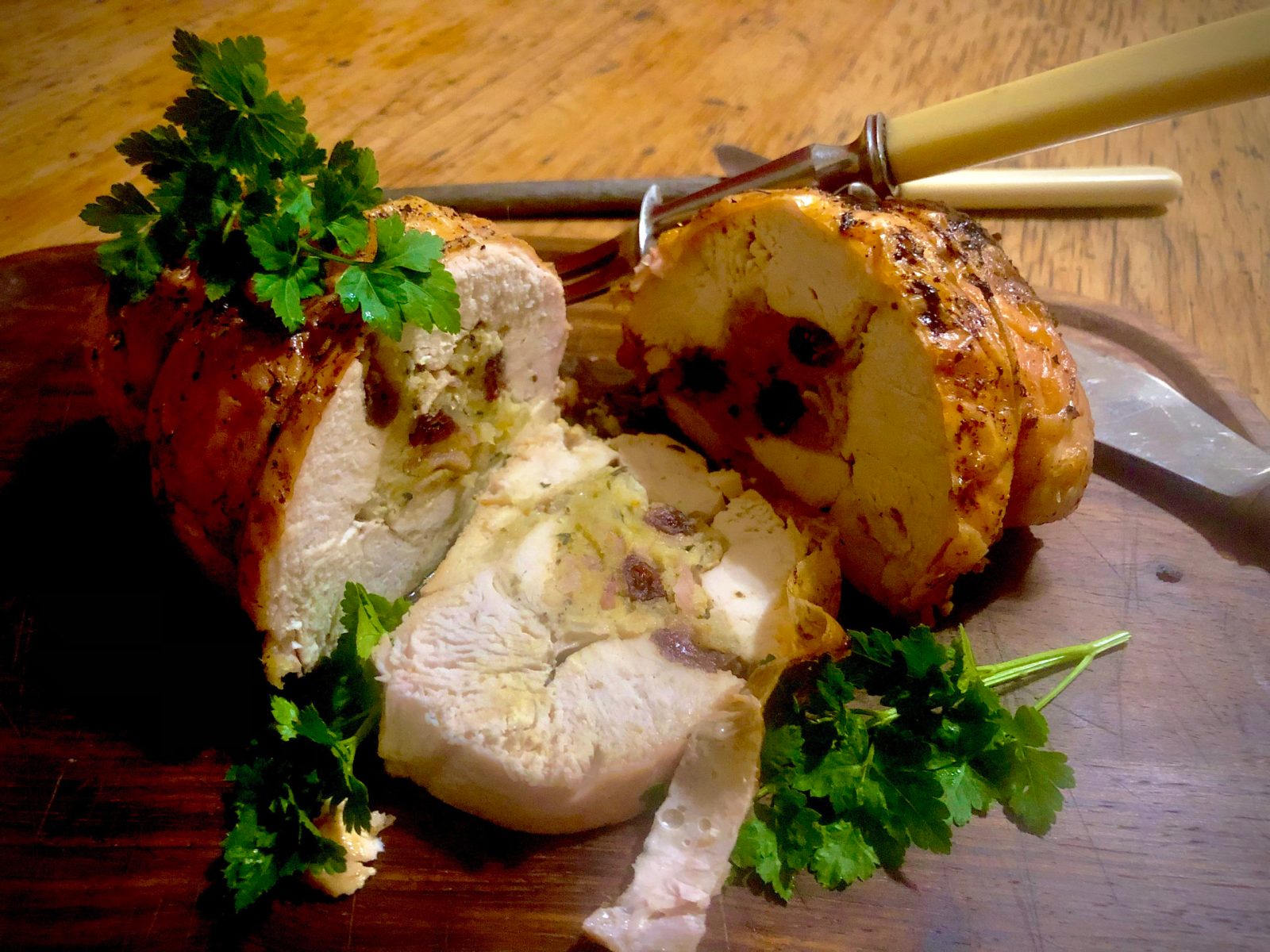 The crown of the chicken makes a beautiful roast in its own right. Once the leg/thigh portions and wings are removed, the remaining carcass is deboned but kept in one piece, then stuffed and roasted.

1 chicken crown, whole, skin on (how to do this starting with a whole bird is described below)

Melt the butter and sauté the onion until softened, then add the bacon and continue cooking while stirring for 2 or 3 minutes. Add all remaining ingredients except the egg, season it, and stir well, then cook gently for 2 or 3 minutes more.

Let it cool a little. Stir in a beaten egg and keep it aside.

You need to buy a whole bird for this, then cut away the entire leg-and-thigh portions and the wings. The Parson’s nose goes too. When cutting off these portions, be careful not to damage the breast skin. You can then freeze the portions you have removed (or refreeze – yes, you can refreeze thawed chicken), or plan a day or two ahead to have a braai or make a chicken bake, and put them in a marinade for that meal. If there’s a neck, remove that too, but with most South African chickens they have already been removed. At a certain point you’ll encounter the “wish bone” and must take that out too (see the video I’ve posted below).

So. You’re left with the carcass containing both breasts. That’s the crown. But it still has the ribcage and keel bone. Now comes the tricky part. Bear this in mind before you begin to debone it: your goal is for the crown to be intact, with the rib cage and keel b0ne gone but the breasts and their skin intact, in one piece, “hinged” in the middle. This is not as difficult to achieve as you might think if you’ve never tried to do it.

I use a paring knife, or a boning knife. It needs to be sharp. Cut in right against the bone cage towards the middle (that is, below the breast and against the bone), slowly and carefully. Once both breasts are loosened but still covered with their skin, work the knife in small push-and-pull movements to disconnect the remaining part of the bone while leaving the skin intact at the centre.

Having said all that, I find that it is simpler just to follow the basic rule: follow the bone, and work slowly.

I couldn’t find a video showing exactly how to debone a whole crown (surely I’m not the only person who does this?). The video below however does have two master butchers demonstrating various ways to debone a chicken, which gives you some pointers. Don’t follow it slavishly: they remove the skin, which you mustn’t do.

The tenderloin is likely to have pulled away from the breast. Keep it to one side. When you’ve made your stuffing (recipe above), cut three or four lengths of kitchen string long enough to go right around the rolled crown with more at each end for tying. Lay the crown out over the lengths of string, skin side down, season the flesh with salt and pepper, and spoon stuffing into the middle. Lay the tenderloin over the centre of the stuffing and fold each side of the breast inwards to cover it. Pull the lengths of string over at each side and tie in the middle, starting with the central string. Turn the rolled crown over and season the skin all over with salt and pepper.

Drizzle with olive oil and place in a roasting dish.

Roast at 240℃ until the skin is crisp and an inserted skewer draws clear liquid, with no red or pink. About 40 minutes to an hour in that very hot oven should do it (ovens are different). Let it rest with the oven off and the door open for 10 minutes. Slice right through into rounds about 1.5 cm thick. Some wine or chicken or vegetable stock deglazed in the pan will give it some nice pan juices to moisten it. DM/TGIFood