Unrest: Of understanding, representation and explanation 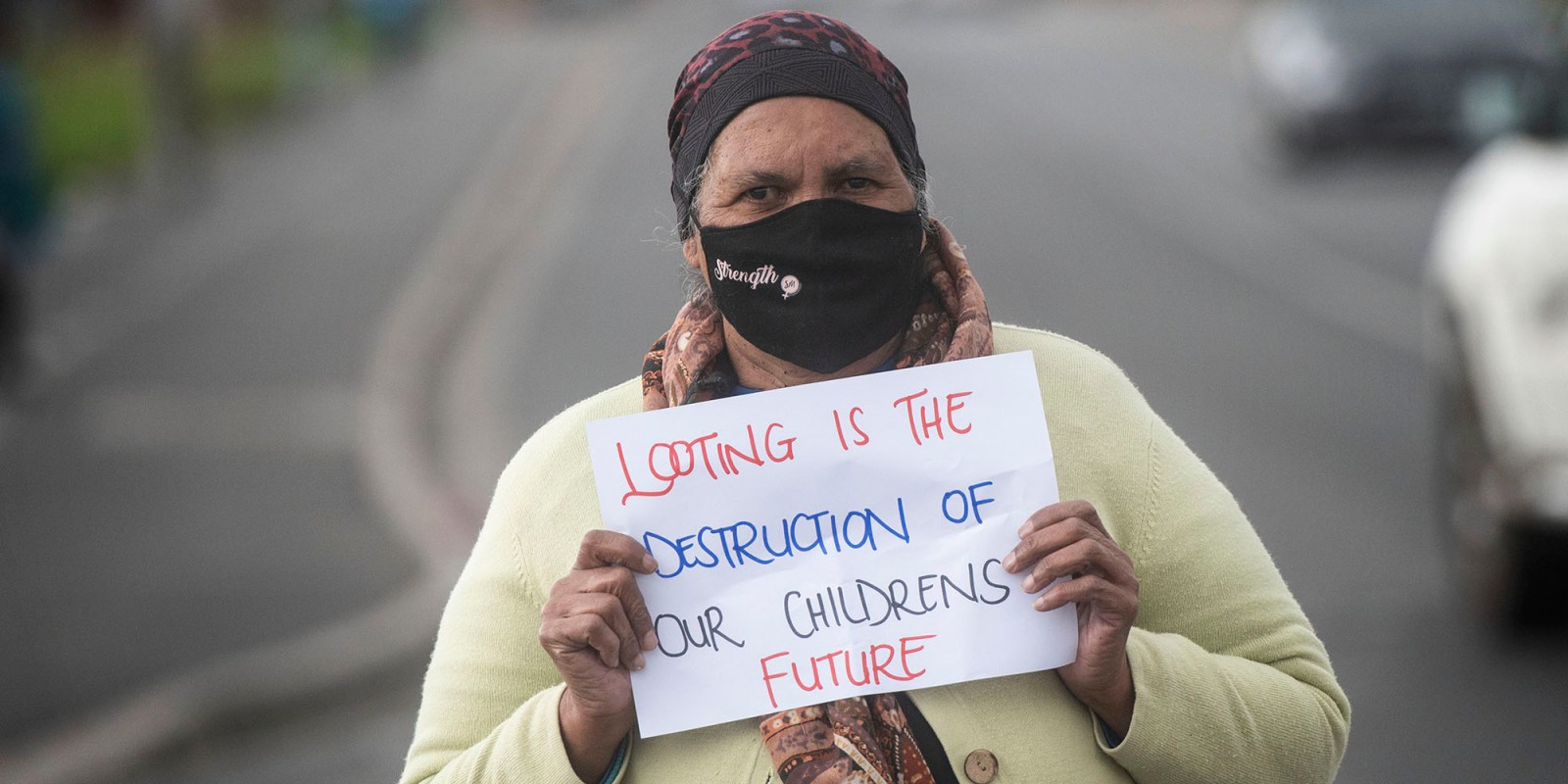 Despite the structural/systemic realities that frame our society and people’s individual and collective lives, at a very fundamental level different people make different choices.

Dale T McKinley is a political activist, researcher-writer and lecturer who presently works at the International Labour, Research and Information Group.

At first, I hesitated to put fingers to keyboard on what transpired last week, given the large number of reports, analysis-opinion pieces, statements and general commentary that have populated the media and civil society terrains. Yet, as I read through many of them (and there are several exceptions), two crucial things became clear: the dominant causal narratives are overly simplistic and often unidimensional, and the dominant analytical tropes miss some basic facts.

The combined result is that the picture of what has happened is only partial, thus making a fuller understanding, representation and explanation more difficult. In this respect, and intentionally leaving aside the terrain of addressing “what is to be done?”, there are three foundational points that ground the events of the last week and two factual points that need to be made.

The historic (apartheid era) and more contemporary (post-apartheid) structural/systemic realities of South African capitalist society are foundational to any understanding and interpretation/analysis. These realities are multifaceted and encompass the following:

Expanding on the last reality as above, understanding and locating the character and role of the ANC — which was the dominant former liberation movement and since 1994 has been the dominant and ruling political party in SA’s representative democracy — is absolutely central. The ANC’s historic and ongoing macro-strategy of accession and accumulation, through the vehicle of the state at all levels, has incubated and spread a politics whose core and dual purpose is the retention of personal and organisational power as well as the advancement of individual and class material benefits.

Besides the more than predictable governance and policy choices that flow from these realities, the “natural” result has always been and remains the presence of different factions (inclusive of the two presently dominant ones revolving around President Cyril Ramaphosa and former president Jacob Zuma), vying from different angles and through different means, for the organisational and institutional drivers’ seats.

In all of this, the ANC (regardless of whatever faction has been dominant) approaches, engages and uses “the people/the masses” in whatever way best facilitates the overall strategy and the more specific practical pursuit of position and power. This is the case whether that pursuit takes place through the avenues of party politics, electoral politics and/or mass/civil society politics and struggle.

Nowhere has this been more evident in recent times than in respect of the effective abandonment of the majority poor and workers to deal with the devastating socioeconomic impacts of the pandemic.

There is a small group of well-financed, equipped and dedicated opportunistic and reactionary political operators, thieves and saboteurs — most of whom are either present or ex-members of the ANC in one form or another — who operate simultaneously in the public sphere and the dark shadows of anonymity.

This group is varyingly gathered and organised around the persona and political-economic patronage circle of Zuma, the so-called Radical Economic Transformation (RET) faction in the ANC and includes ex (and possibly serving) government officials (at different levels), intelligence operatives, police personnel and a motley crew of plain criminal elements.

Their main propaganda weapons include: pseudo-radical rhetoric around RET; opportunistically attacking the political and institutional legitimacy of the Constitution and the judiciary while making full use of both when it suits them; engaging in fake, racialised posturing as allies and defenders of the workers and poor; hypocritically claiming to confront “White Monopoly Capital”; and, more recently, using the cover of victimhood and grievance centred on Zuma’s legal cases and incarceration.

Practically, the core aims for some time now have been to germinate and execute a plan to: engage in an already successful campaign of turbo-charging the looting of public resources and state capacity; create parallel and wholly unaccountable structures/entities to fight internal state and ANC factional battles; construct the pretence of an “anti-imperialist” and “anti-capitalist” politics while simultaneously forging an “alternative” regime of accumulation with both “friendly” and gangster capitalists as well as with more localised business mafias; and spread disinformation (mostly through social media), that seeks to foment racial (and to a lesser extent ethnic) division as well as incite violence and fear-mongering.

Almost everything that took place as part of the unrest happened in certain parts of the two provinces of KZN and Gauteng and even then, especially in Gauteng, only in some areas/townships and not in many others. This was for very specific reasons, related mostly to: the key targets of those that initially engaged in acts of sabotage, incited violence and who threw the first matches; the social, economic and political differentiations within and between various poor/working-class communities; and, the somewhat “special” character of the two provinces’ spatial, residential and consumer geographies.

The forms of unrest that then came to dominate in KZN and Gauteng did not spread in any meaningful or sustained way to the other seven provinces in which the majority of South Africa’s population resides (55% by the latest count) and where most all of the same economic, political and social cleavages beset that majority. This does not mean that further unrest, inclusive of some of the same forms that occurred last week, is not eminently possible on a more nationwide scale whether in the more immediate or medium term.

Regardless, the dominant narrative and claiming/framing is that what happened last week was at a national, societal (qua, “South Africa”) level.

Whether intentional or not, this logically leads to an interpretive conclusion (especially in an age of social media-framed dumbing down and sound bites) that the various actors in the unrest are representative of all of the country, the society and its peoples.

As above, while the systemic and ANC realities are most definitely national and certainly “South African” in the sense of all who live in the country, the specific events that animated this unrest were definitely not. Saying and arguing otherwise is not only factually incorrect but borders on being patronising of the actual majority.

There was a small minority of people — inclusive of those who live in poor/marginalised communities — who actually participated in the various forms of unrest and more particularly the targeting of shops and businesses (both corporate and small-scale) in the two provinces that do not sell/trade food items. Yes, there were thousands who did, but there were many more millions who did not and whose “actions” could/can never be captured on video/camera and broadcast to the nation and the world.

While an argument can be made that attributes a “mass character” to the taking of food in certain areas, a dominant narrative that ascribes the unrest to “the masses” might be representatively and politically satisfying but again, it is not factually correct.

Further, such a narrative indirectly makes a highly contestable assumption, namely that the majority of “the masses” are/would be, in silent acquiescence to what transpired. Likewise, it surfaces an almost pre-constructed, instrumentalist understanding of and approach to the agency of ordinary people.

This does not mean that the vast majority are not suffering, that there is not a real food crisis, a real jobs crisis, a real climate crisis, a real health crisis, a real social crisis or any of the other crises that do exist; nor, does it mean that those “masses” do not have fundamentally immediate needs or that they do not want meaningful socioeconomic redistribution and systemic change. It just means that even despite the structural/systemic realities that frame our society and people’s individual and collective lives, at a very fundamental level different people make different choices, not only about how they want to live, but about how they go about confronting those realities and trying to change their lives. DM