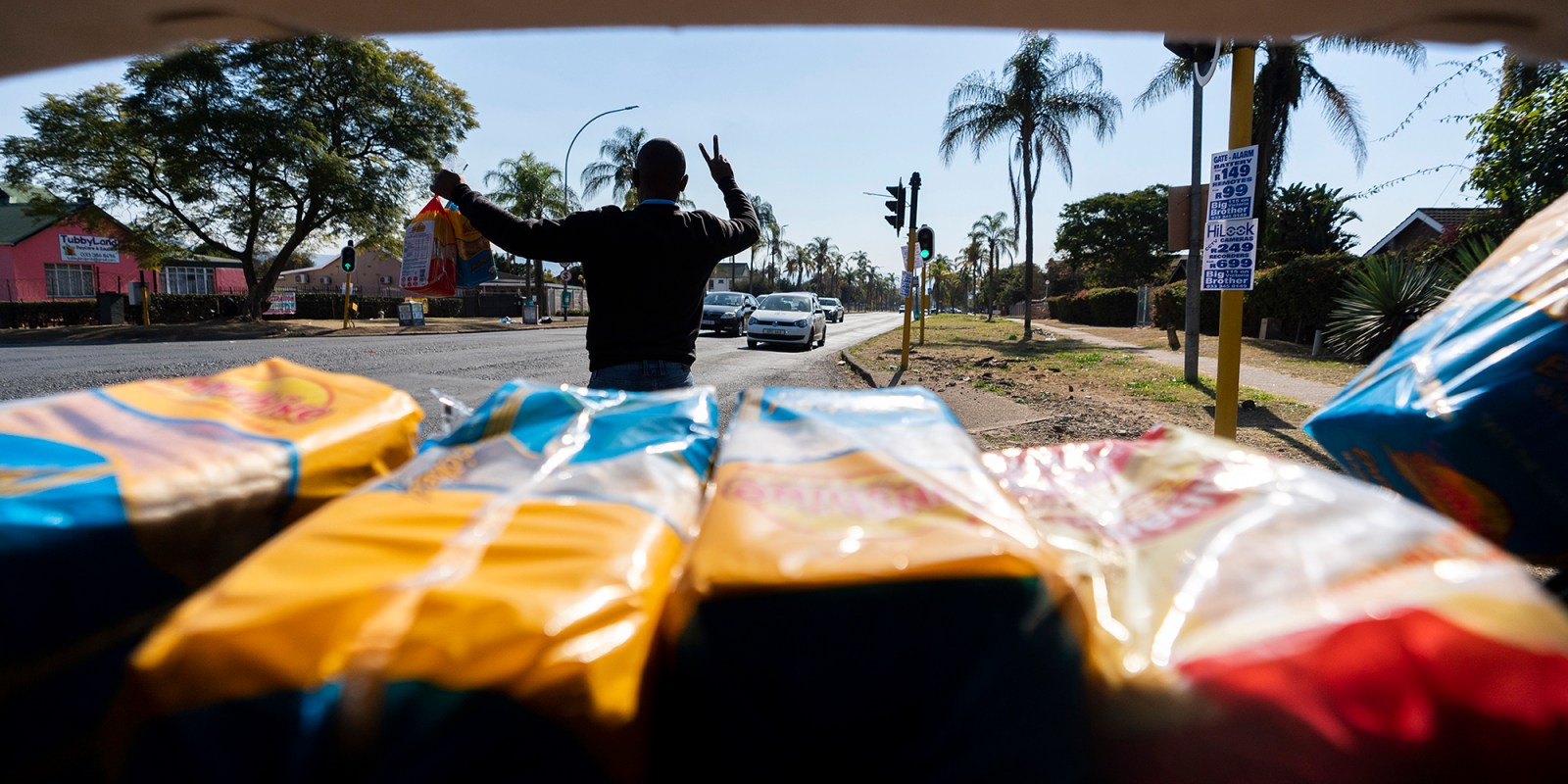 Mduduzi Phetha sells bread alongside the road from his car boot in Pietermaritzburg on 16 July 2021. (Photo: Shiraaz Mohamed)

Being able to buy staples such as bread has become the greatest challenge for residents of Umlazi, south of Durban, which is stable after a week of unrest.

While the situation in Umlazi and surrounding areas seem to have simmered down after recent unrest that lasted a week, residents face the new challenge of getting food at reasonable prices after most of the shops were looted and others gutted by fire.

Basic food such as bread can now be double the price. Previously, white bread retailed for about R15, but now it’s a bargain if you can get it for R20. Most residents are forking out R25 and in some cases R30 for a single loaf.

This has left many struggling to survive.

Nkosakhe Mpofana (24), a resident of N section in Umlazi who had to walk from one shop to another trying to buy bread, says they need help to report people who have hiked food prices exorbitantly.

“I wish people could be given a number they can call to report whoever is selling bread for R30. Since the start of the unrest I had decided to not buy bread. I could not justify buying bread for R30,” he says.

He says he has opted to buy fat cakes and makes steamed bread to survive.

He also complains about the price of cooking oil — this has gone from R27 to R32 for 750ml. He says some shops don’t even have it. Shops in other areas have closed due to looting or because they have been burnt.

However, not everyone is raising prices. Njabulo Mthembu runs a shop in the area and if residents are lucky to get there in time they can pick up a loaf of brown bread for R15 or white for R16.

He says this is largely because the bakery delivers to his shop.

“I made plans on time when I saw that the unrest had disrupted most services. I got numbers for the people I would need to speak to at the bakery. I knew that bread is one of the most basic foods and our community buys it on a daily basis,” he says.

These have been noticeable differences to residents who rely on tuck shops for basics.

Nhlanhla Ngubane (58), a resident of W section in Umlazi, is now forced to buy bread for R23 from a nearby convenience shop that is part of a petrol station.

He says on days when he doesn’t have money for bread his family has had “to improvise by making steam bread using flour, yeast and sugar”.

“I’ve been buying it (brown bread) at the convenience shop at R23 because this is the only place where I can buy bread close to me. The shop that was close to our house was burnt,” he says.

Bo Hadebe (42), who has two young children, says she is worried about the high prices — they make it hard to feed her family, especially since she is unemployed.

She says she wishes something could be done to bring some form of relief.

Mpumelelo Molefe, the owner of Shabo’s Fruit and Veggie, says it has been a struggle to get stock for his shop. This makes it difficult for him to operate as he is unable to sell basics such as airtime.

One of the big shops he used to get goods from, Panjivans, was gutted by fire when looters broke in.

“It used to be easy for me to order everything I needed for the shop. I now have to go to town to buy goods. Sometimes I get there and find that they don’t have everything,” he says.

He ends up wasting petrol and regretting having driven to town. Molefe says he has tried to ensure that most prices are not hiked, especially for staples such as bread.

Another shop owner, Bheki Mseleku, who has been running tuck shops for more than 10 years, says not being able to easily access stock has led to some price increases.

He now sells a white loaf for R20. He believes the hike is reasonable: “I know that some people are selling it for R25 and R30. I don’t believe that people should be made to suffer. The hikes need to be reasonable.”

Mseleku says that for him, the hike is partly motivated by the extra cost he has had to take on. He used to have bread delivered to his tuck shop but now, “I have to meet the bakery van halfway. I have to drive from Umlazi to Ngonyameni to pick up the bread.”

He says soft drinks are hard to obtain for most shop owners, but hiking prices too high is still not justifiable. Some people are taking advantage of the situation at the expense of the public, who rely on tuck shops, he adds.

Mseleku hopes the situation will change as things seem to be going back to normal.

The KwaZulu-Natal Department of Economic Development, Tourism and Environmental Affairs said it had received complaints from consumers about price gouging by some businesses. A team from its Consumer Protection Unit would investigate. DM