In focus: how vaccination numbers compare across SA’s...

In focus: how vaccination numbers compare across SA’s provinces 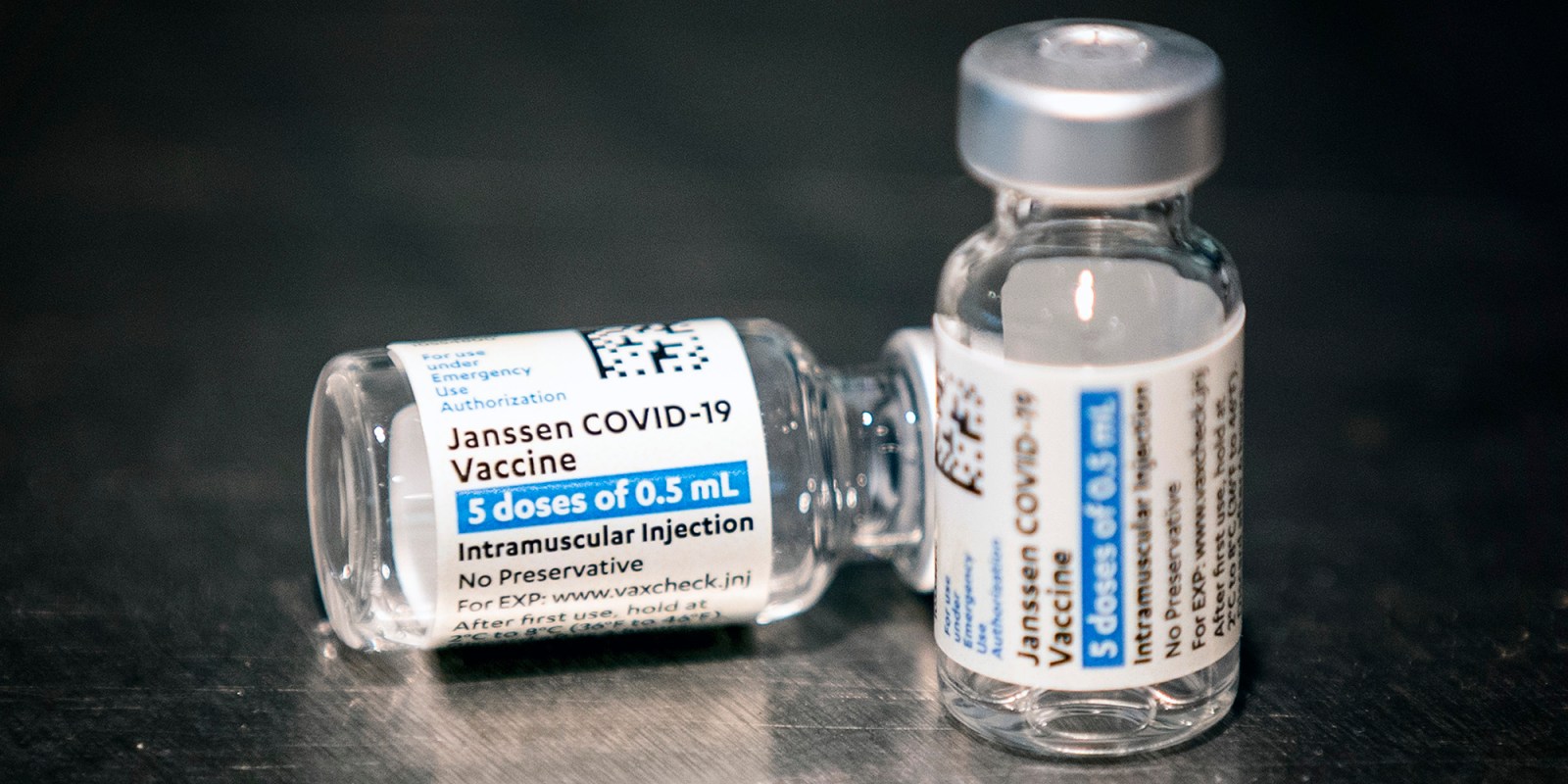 Vials of the Johnson & Johnson vaccine against Covid-19 are displayed on 07 May 2021. (Photo: EPA-EFE/ETIENNE LAURENT)

Over five million people in South Africa have so far received at least one shot of a Covid-19 vaccine. Elri Voigt unpacks how the vaccination roll-out is going in South Africa’s nine provinces. Though the numbers do not tell the full story and provinces face different challenges, indications are that Limpopo, Western Cape, Eastern Cape, and KwaZulu-Natal are doing well, while Mpumalanga is struggling.

The pace of South Africa’s Covid-19 vaccination roll-out has sped up over the last month. Over five million people in the country have received at least one dose of a vaccine. About 150,000 doses are now being administered on most weekdays — and that is with significant disruptions due to the unrest in KwaZulu-Natal and Gauteng.

Registration opened on 15 July for those aged 35 to 49, with the aim to vaccinate this age group from 1 August. Various types of frontline workers, such as education staff, police, correctional facilities staff, and the national defence force, are also being vaccinated, as explained in a Department of Health statement. The Department of Social Development will start its vaccination roll-out for its employees this week, according to a press release.

With all this expanded eligibility and more mass vaccination sites expected to come online in the coming weeks, numbers are set to increase further.

In addition, Acting Minister of Health, Mmamoloko Kubayi-Ngubane, announced on 9 July that after a meeting with the National Treasury, the Department of Health will start “work to ensure the availability of human capital to vaccinate over weekends as well”. She said the target to achieve this is by 1 August. However, some provinces such as Gauteng, KwaZulu-Natal, and the Free State are already vaccinating over weekends.

Using data from the government’s vaccination dashboard (sourced on 18 July) and just-released population estimates from Statistics South Africa, we calculated the percentage of people aged 20 and older who have been fully vaccinated in each province, the percentage who have received at least one dose (either single-dose J&J or first dose Pfizer), and the percentage who have received only first dose Pfizer. We excluded 18- and 19-year-olds from our main calculation due to how the Stats SA estimates are broken down — which is why our calculations are for people twenty and older (which we refer to as 20+). We’ve also included the percentages of the total population per province (not just 20+) in the table for the sake of completeness and since these are numbers you may see calculated elsewhere.

According to our calculations, the Eastern Cape is narrowly in the lead, with 15.33% of its 20+ population having received at least one shot of a Covid-19 vaccine. The Eastern Cape is closely followed by Limpopo and the Western Cape. If you slice the data differently the lead changes. (You can click on the headings in the above table to sort by the various metrics.)

KwaZulu-Natal currently has the highest absolute number of 20+ people who are fully vaccinated, having received either the single-dose Johnson & Johnson vaccine or both doses of the Pfizer vaccine.

These numbers of course tell only part of the story and straight comparisons are not necessarily fair. The challenges in a more rural province like the Northern Cape are different from those in a more urban province such as Gauteng. Provinces also differ in terms of the size of their populations, with Gauteng and KwaZulu-Natal having much larger populations than the other seven provinces.

By 18 July, the Eastern Cape had administered a total of 659,127 vaccine doses, with 15.33% of its 20+ population vaccinated. This means the province has the highest percentage of 20+ people who have received at least one jab, followed by Limpopo.

The percentage of 20+ people fully vaccinated in the province is currently estimated at 4.92%.

By 18 July, the Free State had administered a total of 268,807 vaccinations. This translates to an estimated 12.42% of the province’s 20+ population who has received at least one vaccination dose of either Johnson & Johnson or Pfizer. Yet only 4.73% of its 20+ population have been fully vaccinated.

By 18 July, a total of 1,224,748 people in Gauteng had been vaccinated. According to Spotlight’s calculations around 9.44% of the province’s 20+ population has received at least one dose of a Covid-19 vaccine.

Of the 20+ population, 3.66% are considered fully vaccinated, having received two doses of the Pfizer vaccine or a single dose of the Johnson & Johnson vaccine.

Head of Communication for the Gauteng Department of Health, Motalatale Modiba told Spotlight the province has been taking various steps to make vaccination more accessible, such as opening vaccination sites over weekends and using pop-up sites and mass vaccination sites.

“Government has taken steps to ensure that we simplify the registration process and even the process to get vaccinated,” he said. “All public vaccinations sites in Gauteng accept walk-ins whether or not people are registered on the EVDS. All persons are assisted with registration and vaccinated, even those who are registered and waiting for SMSes.”

The province also launched a mobile vaccination drive early in July. According to a press release by the provincial department of health, the drive was launched in Ekurhuleni, Tshwane, and Johannesburg. “The drive is aimed at assisting all eligible persons for vaccination to get vaccinated near their places of residence or work. Mobile clinics and additional vaccination sites will be used,” it stated. According to the press release, transport will also be provided for those in need, with pick-up points available in different areas.

Vaccinations were halted last week in the province amid violent looting and unrest that unfolded throughout the week. But the province has been doing well, particularly considering that much of the province is rural and the province has the second largest population of South Africa’s nine provinces.

According to the vaccination dashboard, KwaZulu-Natal had administered a total of 980,612 vaccines by 18 July. This means around 11.60% of the province’s 20+ population have been vaccinated with at least one dose.

In terms of the percentage of the 20+ fully vaccinated, the province is currently narrowly in the lead with 5.58%.

When it comes to the percentage of people 20+ who have received at least one shot of a Covid-19 vaccine, Limpopo is just behind the Eastern Cape at 15.21 %. By 18 July, the province had administered a total of 585,860 vaccine doses.

An estimated 5.55% of the province’s 20+ population has been fully vaccinated.

In Mpumalanga, 7.33% of people 20+ have received at least one shot of a Covid-19 vaccine. This is the lowest percentage of all the provinces. By 18 July, the province had administered 242,937 vaccines and has fully vaccinated only around 2.77% of the 20+ population.

The Northern Cape had, by 18 July, administered 85,165 vaccinations. This translates to about 9.59% of the province’s 20+ population has received at least one vaccination dose. We calculate that around 3.66% of the 20+ population has been fully vaccinated, with either two doses of the Pfizer vaccine or one dose of the Johnson & Johnson vaccine.

Having administered 262,200 vaccinations so far, the North West province has administered at least one shot to an estimated 8.51% of its 20+ population. Out of the adult population, Spotlight calculates that 3.61% of the province’s 20+ population has been fully vaccinated.

The province has also been vaccinating over the weekend. By 18 July, according to the vaccination dashboard, the province had administered 2,163 vaccinations in the last 24 hours.

The province has been steadily scaling up its vaccination roll-out, according to a press release by premier Alan Winde last week. “As of last week, we again met and exceeded our vaccination targets in the Western Cape. Against a target of 120,000 vaccines, we administered 133,390. In the last 24 hours alone, we vaccinated 30,000 people in the province. This is our highest number vaccinated in 24 hours on record,” he said.

The province is also preparing to have its first mass drive-through vaccination site at the Athlone stadium which will be operational next month. Another mass vaccination centre at the Cape Town International Convention Centre opened in the province on 7 July.

Spokesperson for the Western Cape Department of Health Mark van der Heever told Spotlight the department has identified areas with low registration and vaccine uptake. “We are working with a range of partners on innovative initiatives through which we can take vaccines to the vulnerable communities, making vaccination easier [and] accessible for them,” he said.

He added that last week, several “out-of-the-box ideas” had been introduced. These include weekend vaccinations in dedicated areas, mobile pop-up vaccination centres, partnering with the South African Social Security Agency (Sassa) to assist with registration and vaccinations at BOXER stores as well as Red Dot Taxis assisting with transport for persons in outlying rural areas. DM/MC